How the torpedo boat was found and recovered from the bottom

The boat sank at the exit from the Karantinna Bay (the city of Sevastopol, Crimea), where a brigade of torpedo boats of the Black Sea Fleet was based during the second heroic defense of Sevastopol in 1941-1942.

First, the specialists examined the area of ​​work in the place of the expected location of the boat using a remote-controlled underwater vehicle.

The operation to lift the found torpedo boat from the bottom of the Quarantine Bay was first cancelled due to the weather. But when the excitement subsided, the sailors were finally able to raise the hull to the surface. But the metal, which had been lying in the sea for 78 years, could not stand it. The hull broke, the stern partially remained in the water. Therefore, it was decided not to lift the find to the deck of the floating crane, but was carefully towed to the pier of the 41st brigade of missile ships and boats. 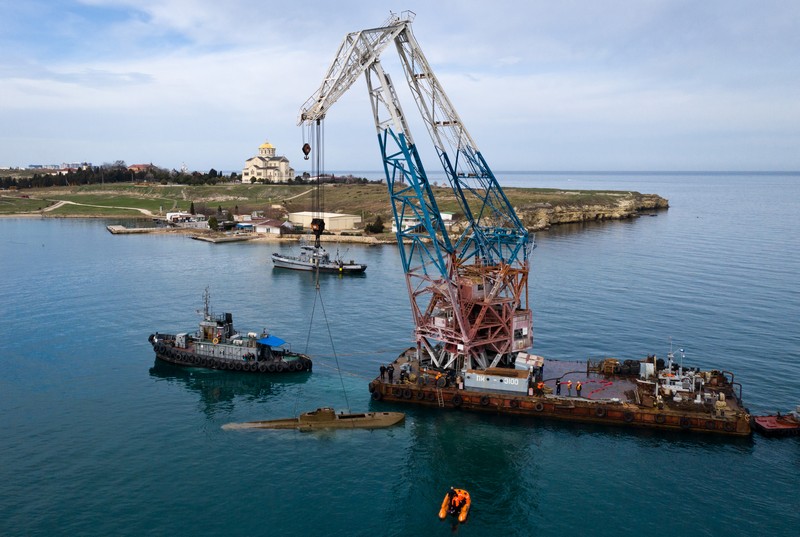 Four divers attached the hull to a floating crane lifting device. In order to return this small, once maneuverable torpedo boat G-5 to its native bay almost 80 years later, three auxiliary vessels worked at once, including a tug, a diving boat and a heavy floating crane.

The divers managed to lift the hull of the boat from the seabed, which was preserved despite the long stay in the water, – concluded the head of the information support department of the Black Sea Fleet Alexei Rulev. 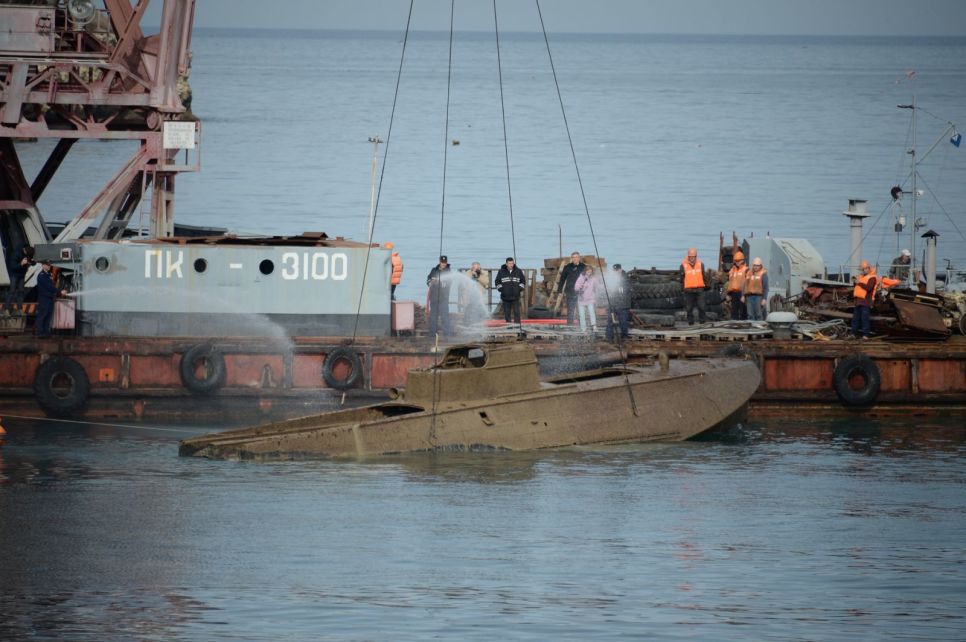 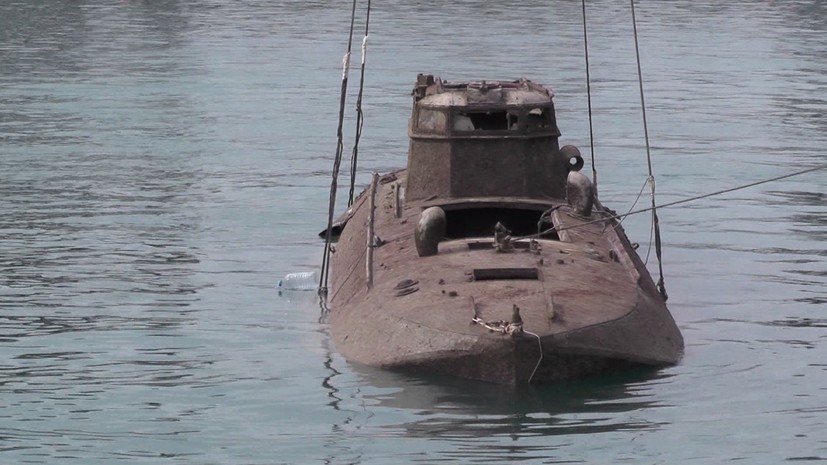 It is known that torpedo boats of the Black Sea Fleet during the World War II made night raids, fired at coastal targets, landed troops, evacuated the wounded, escorted transport ships, rescued aircraft pilots who fell into the Black Sea.

A special commission will study the circumstances of the loss of the boat, as well as assess the condition of the hull and the possibility of using it as a museum object. The found torpedo boat is planned to be restored and transferred to the 35th Coastal Battery Museum in the city of Sevastopol. 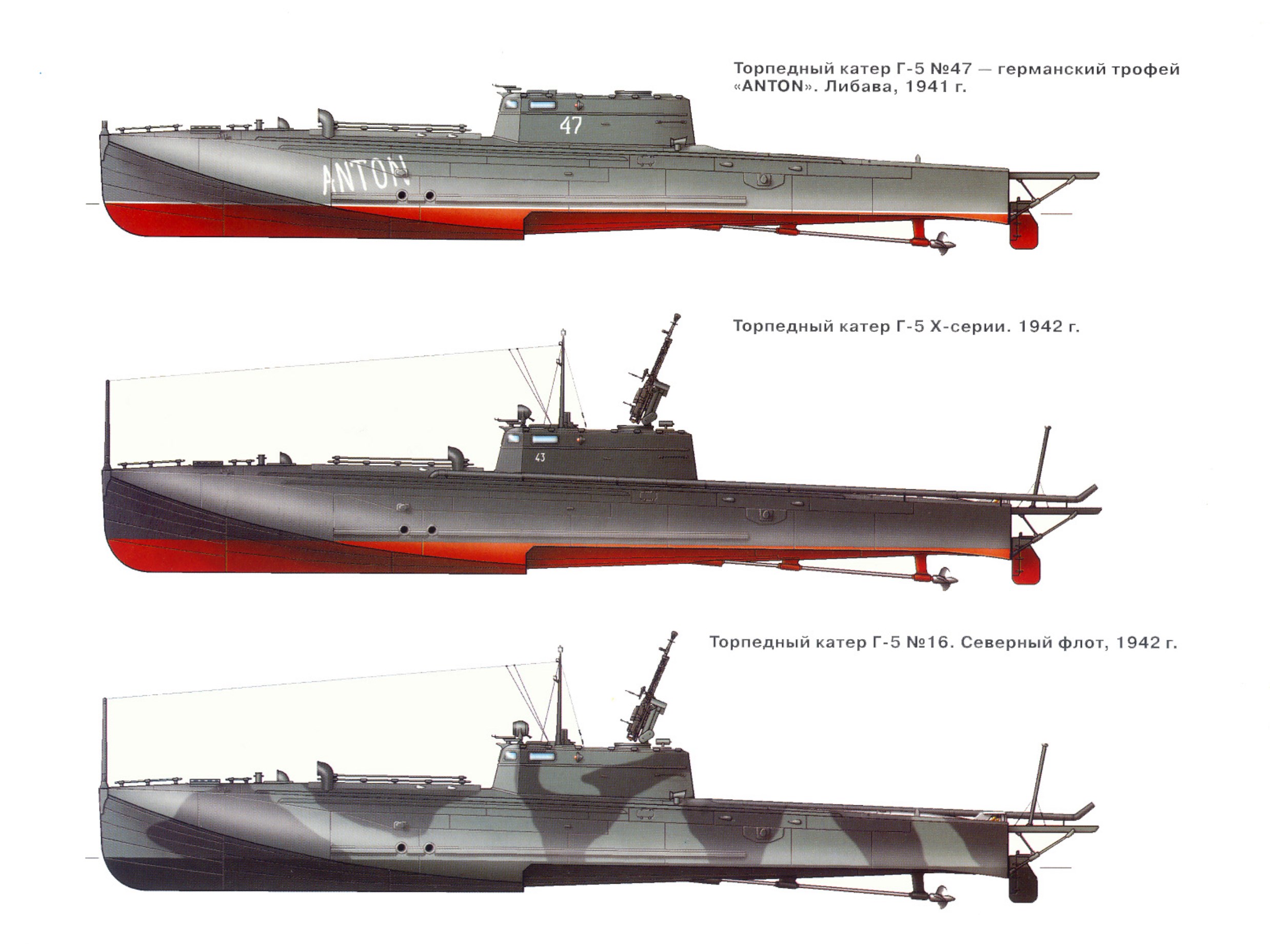 The G-5 was the most massive series of torpedo boats in the history of the Navy. Their production began long before the Second World War, in 1933. The Tupolev Design Bureau was offered to create a high-speed torpedo boat. Tests of the very first G-5 were carried out at the Black Sea Fleet in Sevastopol. They were successful, based on the results, improvements were made, after which mass production began.

The production of the G-5 torpedo boats continued until 1944. In total, more than 330 units were produced, which served in the Baltic, Black Sea and Northern fleets. 30 sailors – crew members of boats of this series – received the title of a Hero of the Soviet Union. 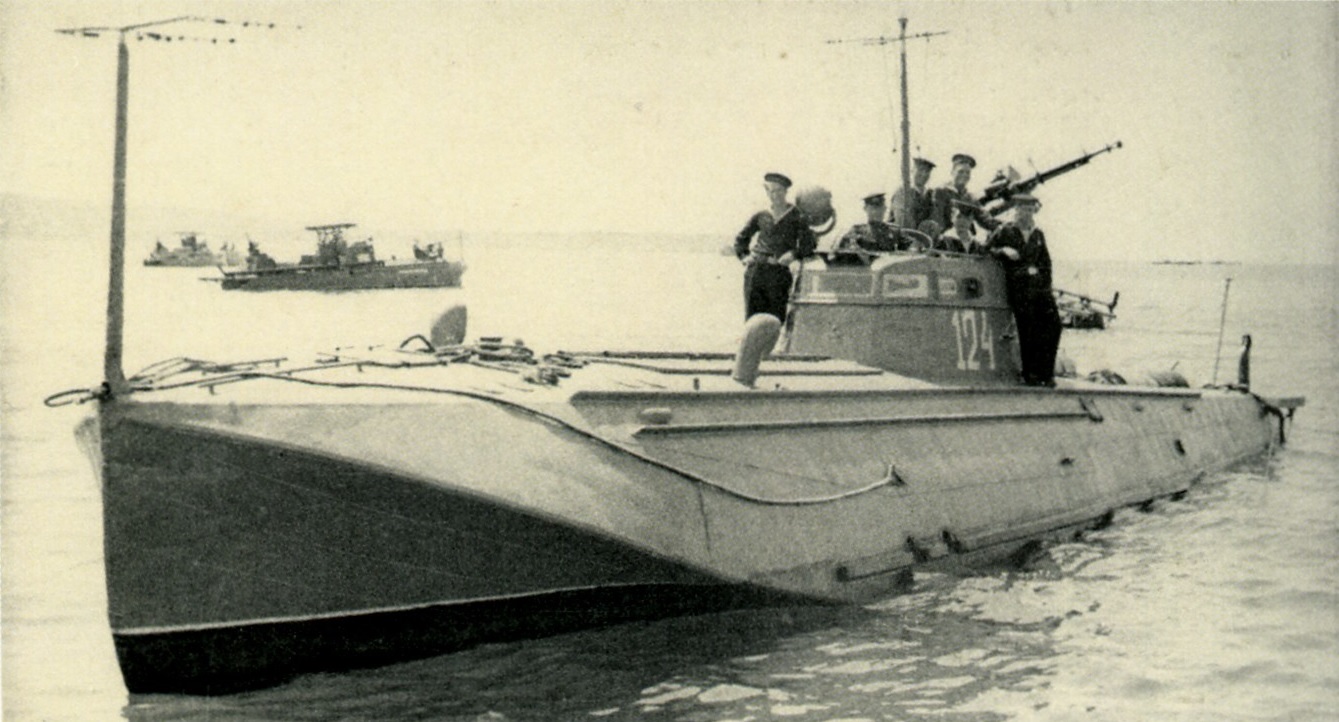 Torpedo boats have become a legend in the small displacement fleet. They acted with lightning speed and developed a tremendous speed – 50 knots (more than 90 kilometers per hour). However, they were practically defenseless during shelling.

Due to their seaworthiness, they were used mainly in the coastal zone, when approaching the main fleet base. They guarded and defended transport, attacked the ships of the Third Reich, which in 1944 tried to export goods from Sevastopol. 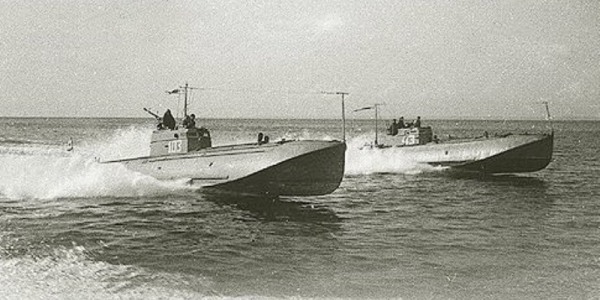 An interesting detail: on board of the boat raised in Sevastopol were missing not only weapons, but also the engine and other mechanisms. Historians speculate that they could have been removed even before the ship sank.

After the liberation of Sevastopol, boats G-5 served in the Black Sea Fleet until the early 1950s, – said the director of the museum. – New boats were no longer produced. To maintain combat readiness, some could be used as donors. Probably the one found in the Quarantine Bay was like that.

Causes of the death of the boat

With a high degree of probability, we can say that the found torpedo boat number 61, which sank on June 15, 1942 in a collision with another torpedo boat number -133, believes Irina Agisheva, head of the World War II history section of the Sevastopol Military History Museum. It’s just that information about other boats that died in Quarantine Bay is not traced in a single document that I have had in my hand. 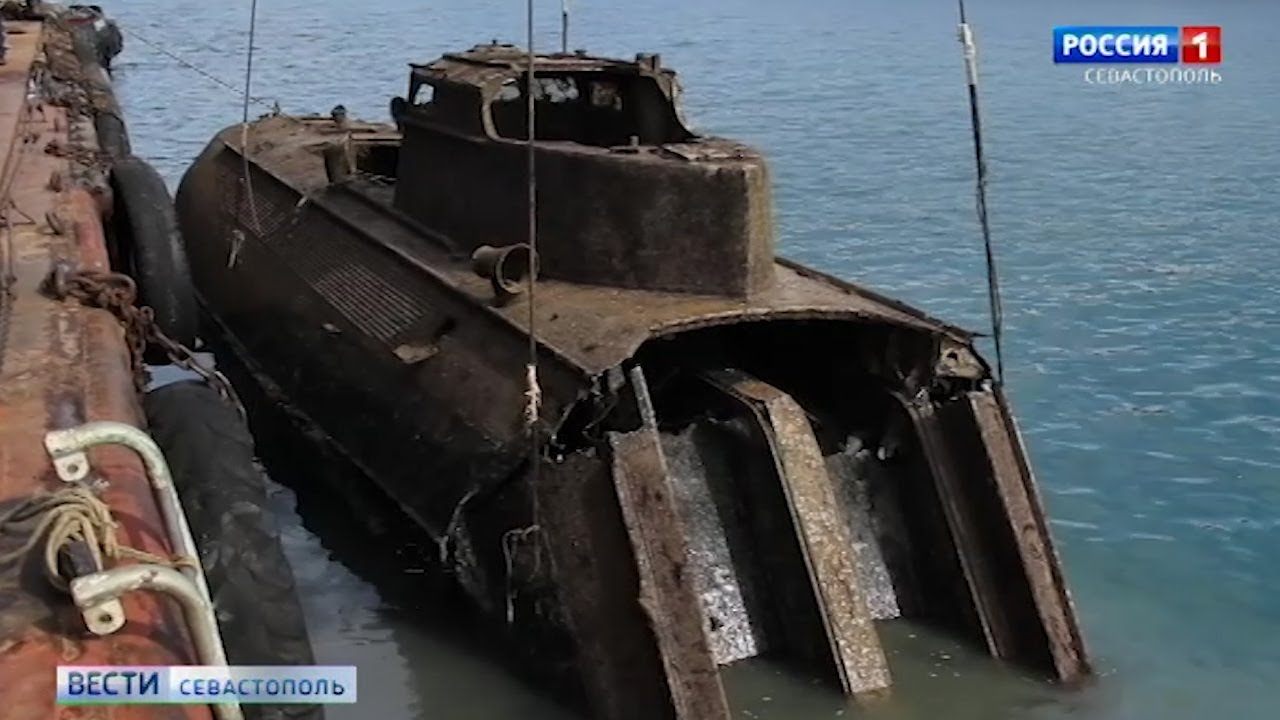 According to another version, it is incorrect to say that the boat was damaged in a battle and sank, – Valery Volodin believes. – Who would lift an engine from the bottom of the bay, which has been in the sea water for a long time? (Recall that the found torpedo boat had no weapons and no engine). Most likely, when all the “stuffing” was removed from the boat, it became light, and during a storm it could be carried away from the pier.

However, in the Sevastopol Military History Museum-Reserve, they adhere to the first version: it is possible that this is a boat with tail number 061, which collided with boat number 133 when leaving the Karantinnaya Bay. This incident is documented. 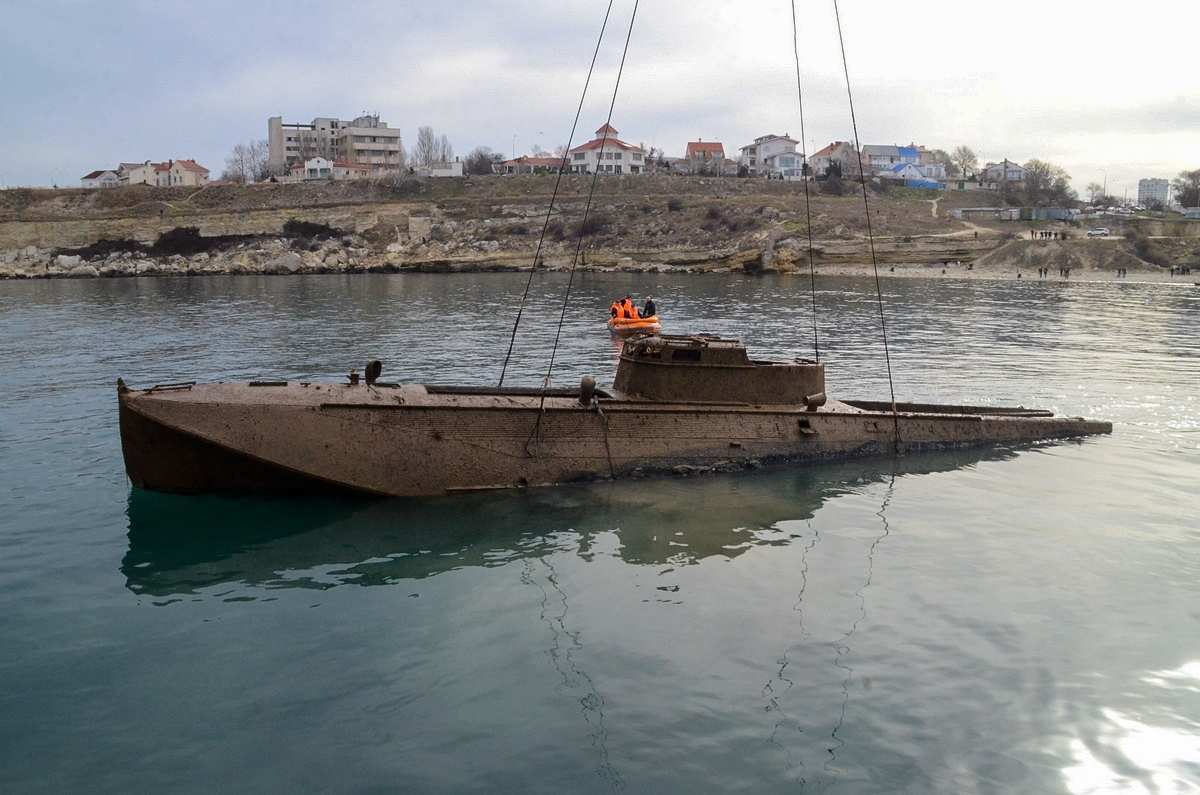 The tail number has not yet been established. You may be able to find the answers after cleaning the case.

“The boat is interesting as a genuine exhibit of the period of the defense of Sevastopol during the Second World War,” notes the director of the 35th Coastal Battery. – We have in our collection the cabin “Sea Hunter-4”, which during the last days of the defense of Sevastopol took out the defenders of the city from here. The G-5s also fought during this period. Therefore, for us this is a very interesting specimen. 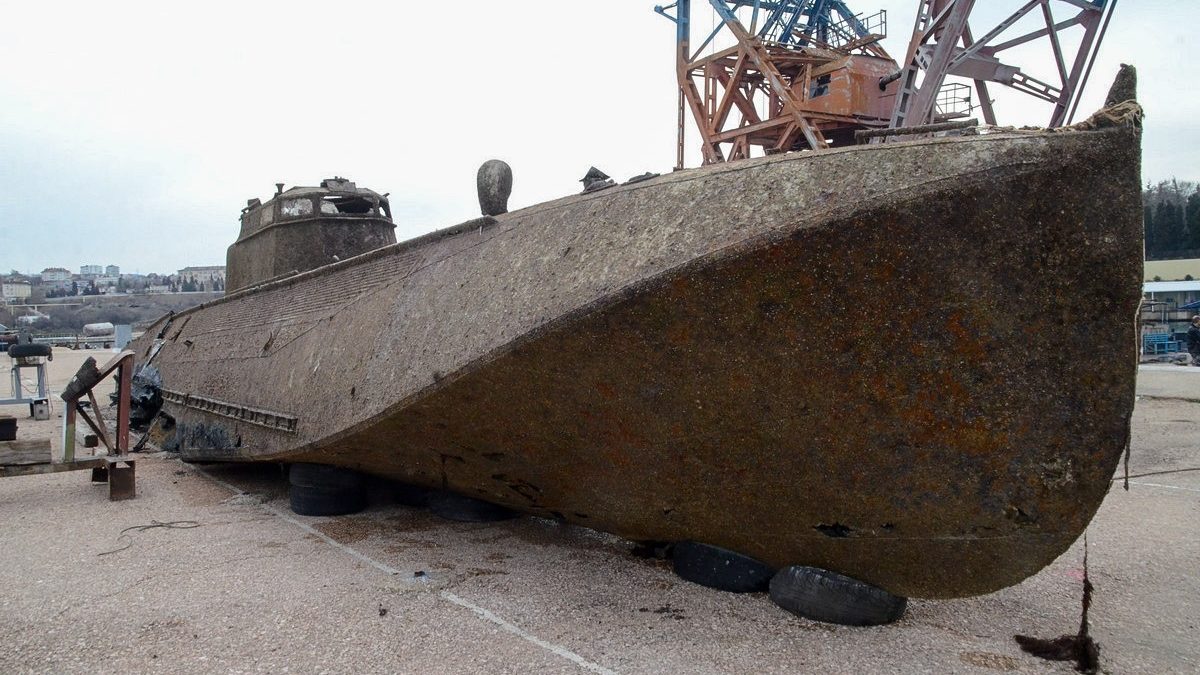 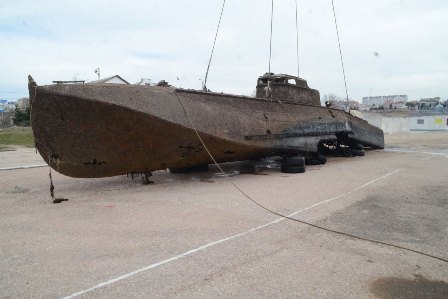 P.S. When lifting out of the water, the boat almost lost its stern – due to corrosion, the hull, which had been lying in the sea for more than 70 years, broke. Rescuers decided to tow it without lifting it out of the water. Now it is on the territory of the 41st brigade of torpedo boats, which to this day is based in the Quarantine Bay of the city of Sevastopol. There, on the alley of heroes-sailors, one of the G-5 boats was installed – earlier it was restored by military ship repairmen. Now they will once again have to return the historical appearance to the warship of the World War II.