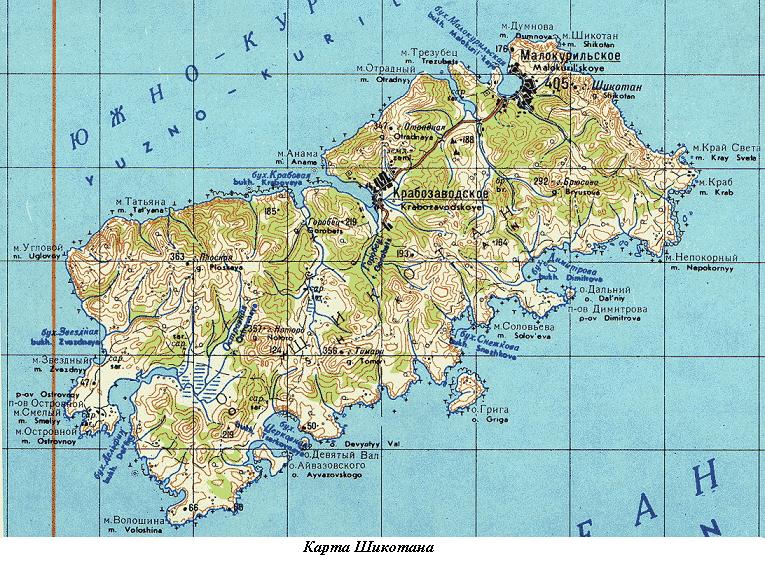 Military heritage from the island of Shikotan

There are no asphalt roads, warships are standing in the port of Malokurilsk, and the banks are still bristling with gun barrels. 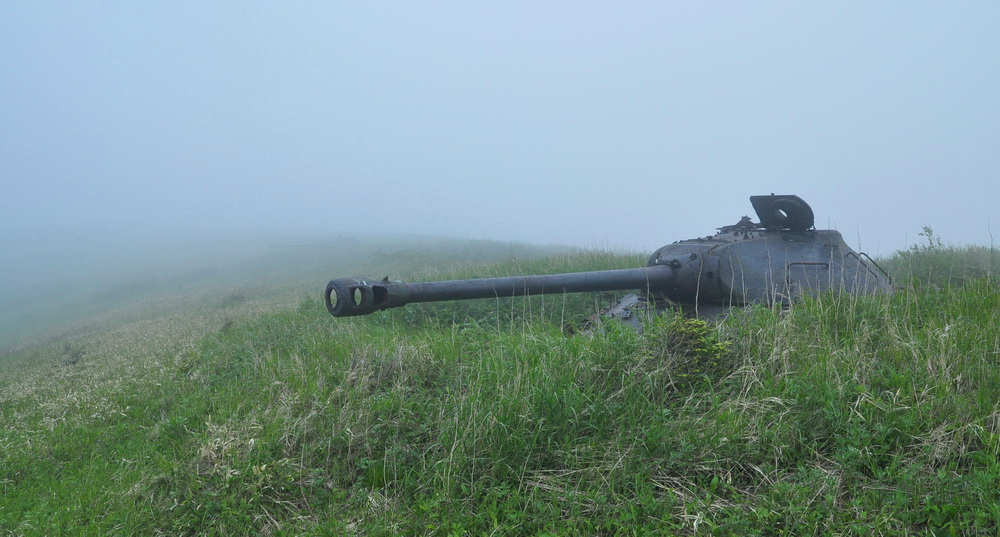 Silent guards of the island.

Upon arriving on the island we went to Malokurilskoe. 15 minutes of gravel road, then, after a short ascent on an all-wheel drive vehicle, we climbed the Malokurilsky “tank hill” for reconnaissance. Immediately we came across the first tank. That was IS-3. Given that these vehicles were produced until 1946 inclusive, the tank in any case was at least 66 years old. Antiques. Directly in combat positions. 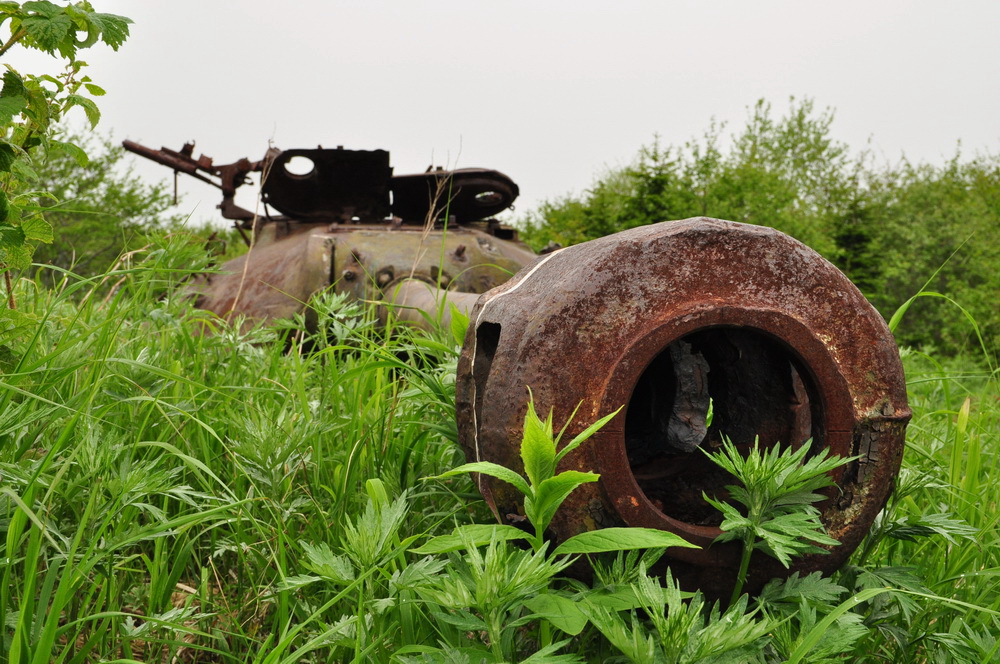 Given that these vehicles were produced until 1946 inclusive, the tank in any case is at least 66 years old.

It is clear that these tanks will not save anyone now, a couple of missiles will fly in and cover the entire island at once, but anyway, it’s sad to see how the abandoned equipment stands and rots. By the way, some tanks came here immediately after the WW2, so we can say that an open-air museum is opened and operates on Shikotan. Only exhibits have not been looked after for a long time. And once upon a time, it was a formidable force that could if not stop, then at least greatly delay the enemy. 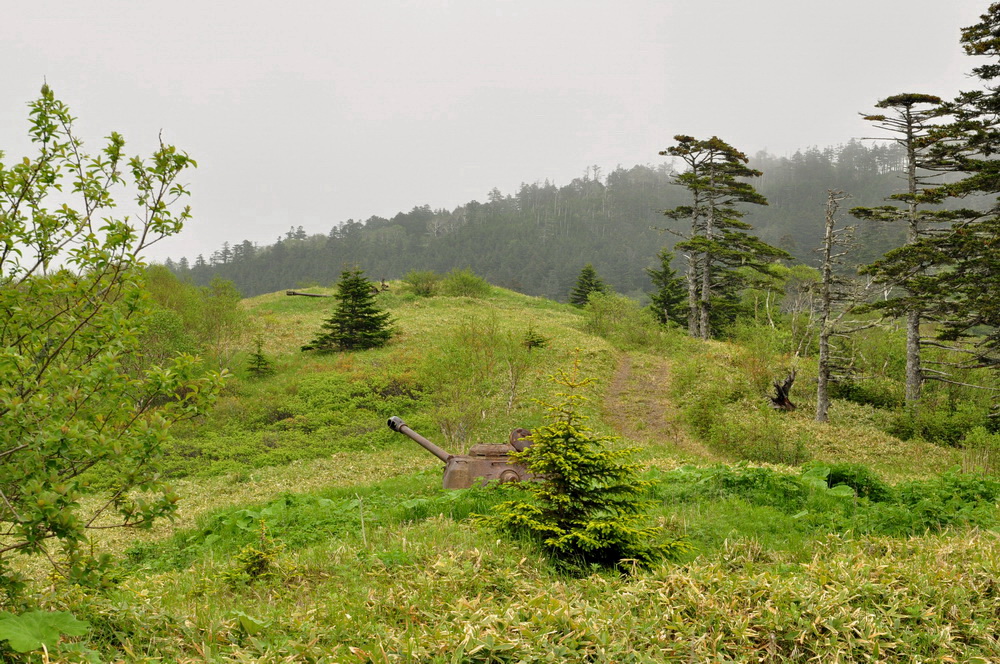 On the right, along the ridge of the hill, the guns of the next two tanks are noticeable. The closest one has a very characteristic tower shape, reminiscent of the T-34-85 tower. Yes, this is IS-2. St. John’s wort, thunderstorm German Tigers. A rare and very interesting car, fanned with well-deserved fame and legends.

Tanks are deeply dug in a hill, and between them trenches are dug, in some places, they are even concreted. The powerful armor of the tanks, and the constant combat training of the crews, and there were 10 vehicles in service, were a very serious problem for a potential enemy of that time. 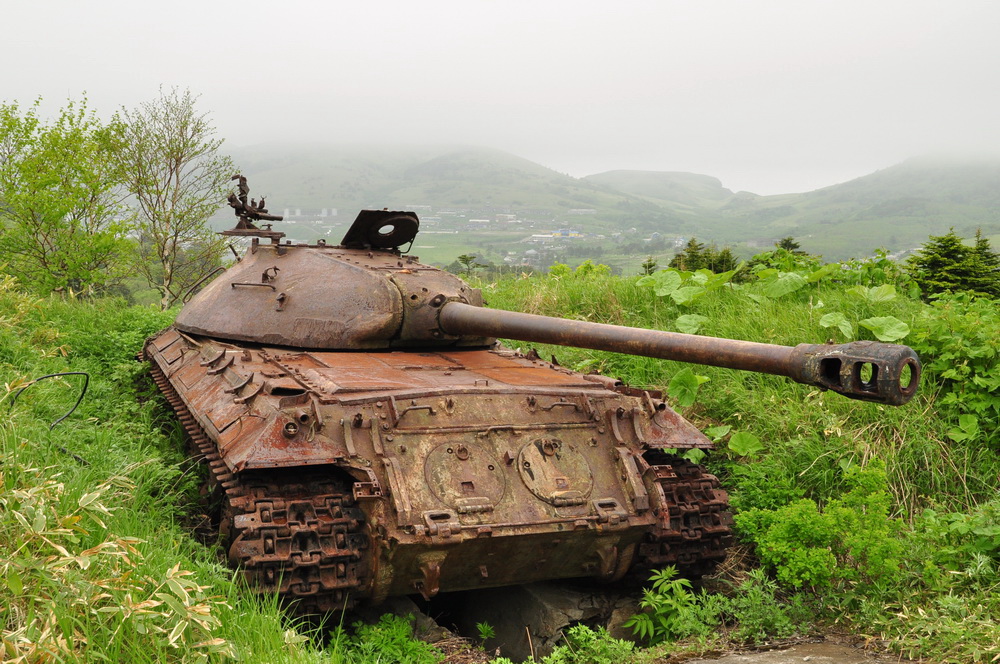 Compulsory live firing was carried out twice a year, and it can be said that every meter was shot. Imagine if a dozen shells hit the same spot at once! Shikotan, and other Kuril Islands, at that time, were reliably protected. On Iturup and Kunashir I have repeatedly met the remains of fortified areas, but this is the first time I saw such a number of tanks. 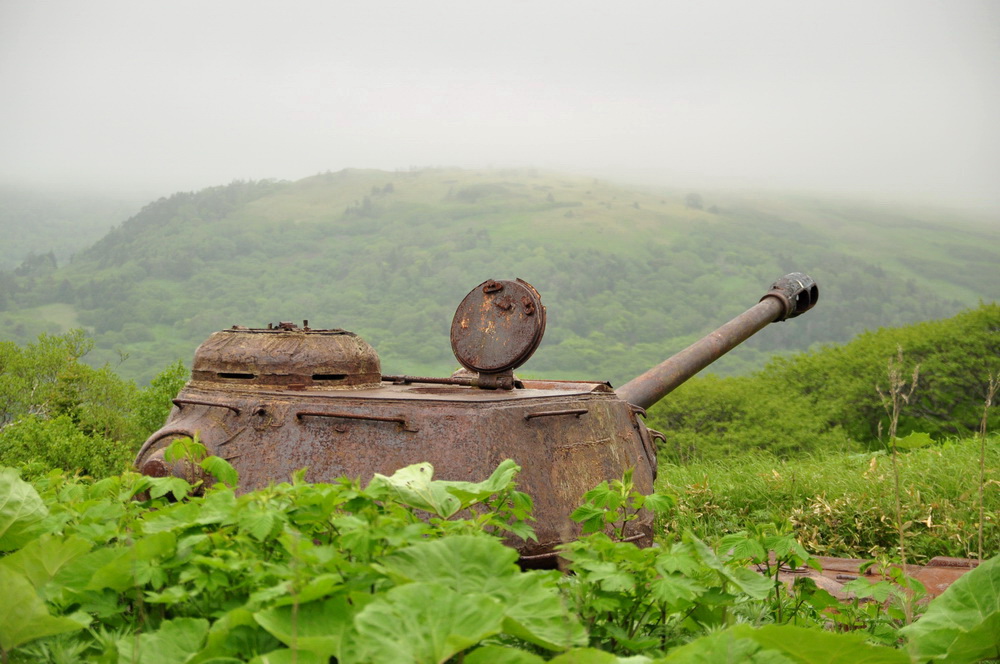 The whole hill seems to be a well-fortified and equipped defense. Do you see the tanks? But they are there! And from the seaside it’s impossible to see them.
You can get to the tanks by the trenches and dugouts, some of which are made of concrete.

It was a little strange to see a tank whose gun was aimed at a quiet and calm Krabozavodsk. Probably someone just tried the mechanism for performance, they say they are all in good condition. But of course, these tanks will never be fired, their trunks have long been covered with lichen and rust. 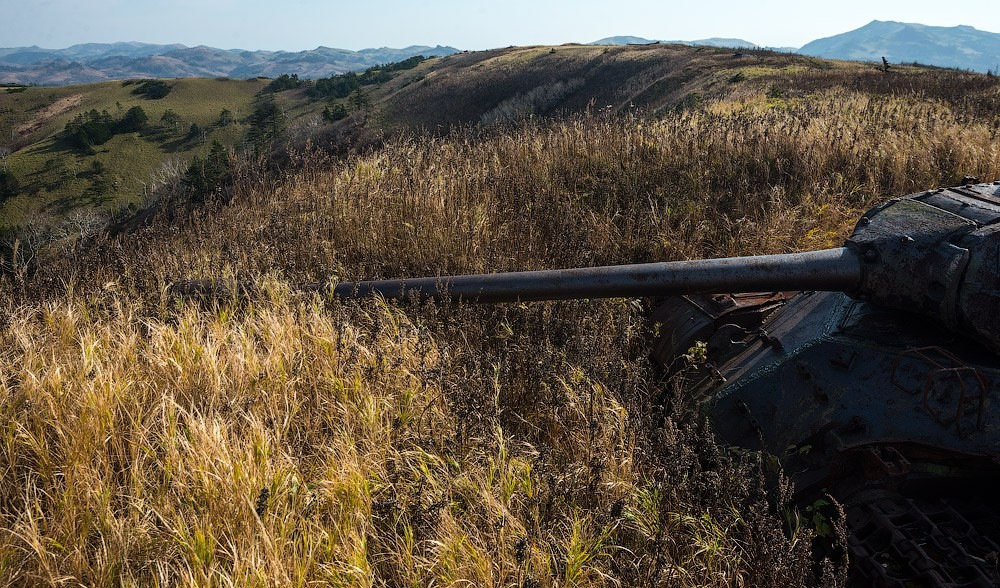 The silhouette of an abandoned IS-2 tank can be seen in the fog. 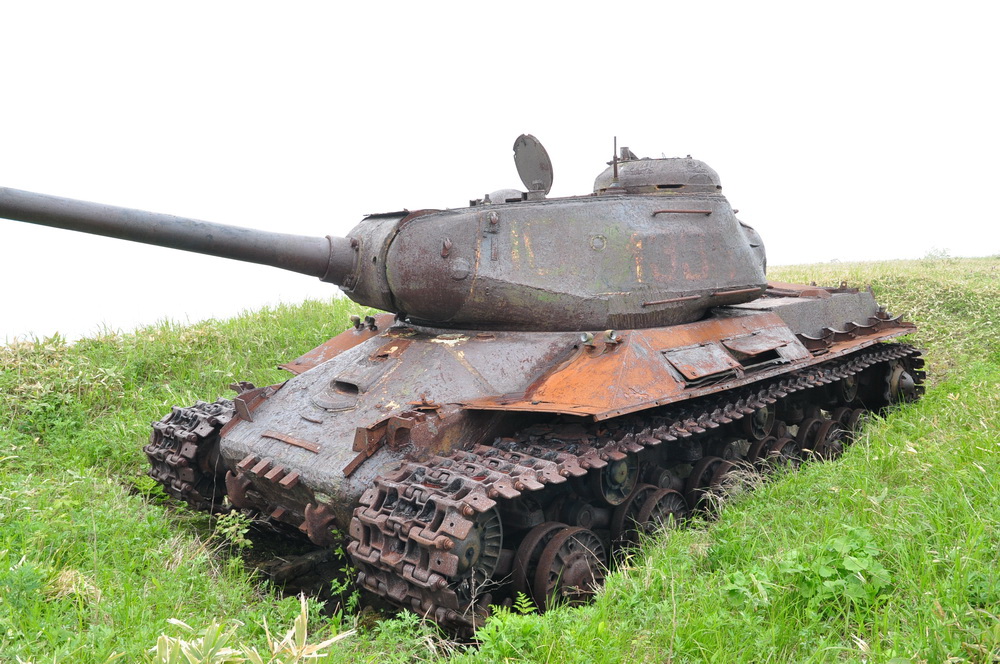 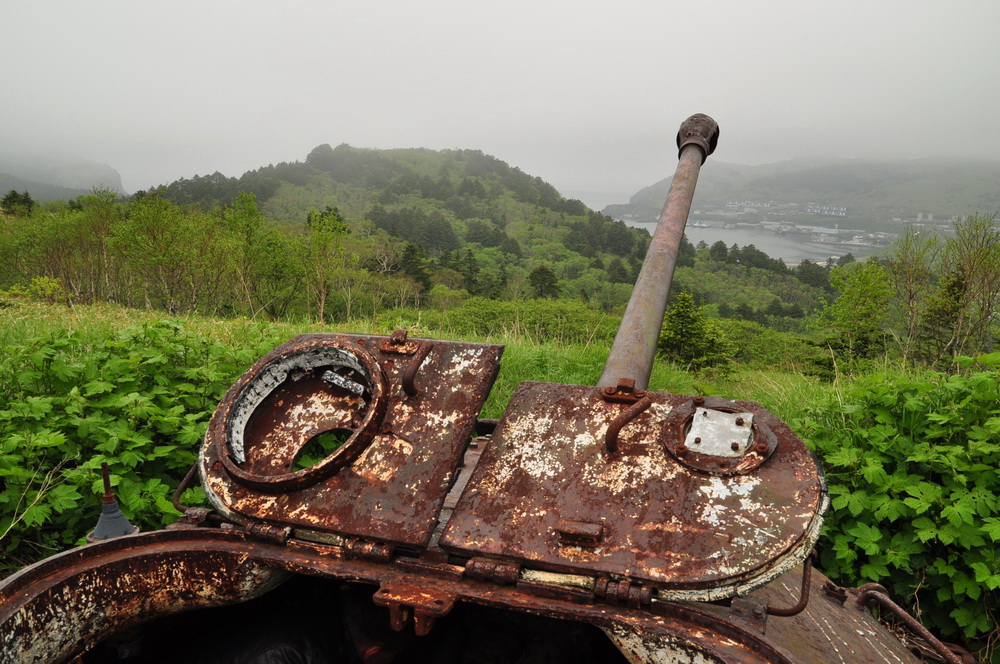 Such a view of the bay was in the gunner.

These abandoned tanks will always remain at their combat post. Gradually, nature will completely absorb them, but the memory of them will live on.

More photos can be seen here.