The Soviet ship Armenia was sunk by two torpedoes launched by a German bomber near the Crimea in 1941. It was only just found in 2020.

The ship was first designed in 1926 by the architect Rednev as a passenger-cargo motor ship, modeled after the Adjaria. It was built at the Baltic factory in Leningrad in 1928. After construction, this newest Soviet liner was managed by the Black Sea Shipping Company on the Odesa-Batumi-Odesa line. It was designed to carry 980 passengers and 1,000 tons of cargo.

Participation in the second world war:

The ship was converted into a sanitary transport ship at the beginning of World War II, based at the Odessa Shipyard. Red crosses were painted along its side and the International Red Cross flag flew over its mast. August 8, 1941, it officially became part of the Black Sea Fleet with Captain-Lieutenant Vladimir Yakovlevich Plaushevsky at its helm.

The ship consisted of an operating room and four dressing rooms with a total of 11 tables. It was staffed by 9 doctors, 29 nurses and 75 orderlies. Pyotr Andreevich Dmitrievsky was appointed 2nd-level military physician, thanks to his experience working in an Odessa-based hospital. The accommodation standards were very limited, and during evacuations (some the same size as Dunkirk, to put it into perspective), they were always significantly exceeded. Taking the place passenger lists weres simply numbers of nameless victims.

During the defense and evacuation of Odessa, Armenia evacuated a total of 16,000 over 15 voyages from Odessa to the ports of the Caucasus. 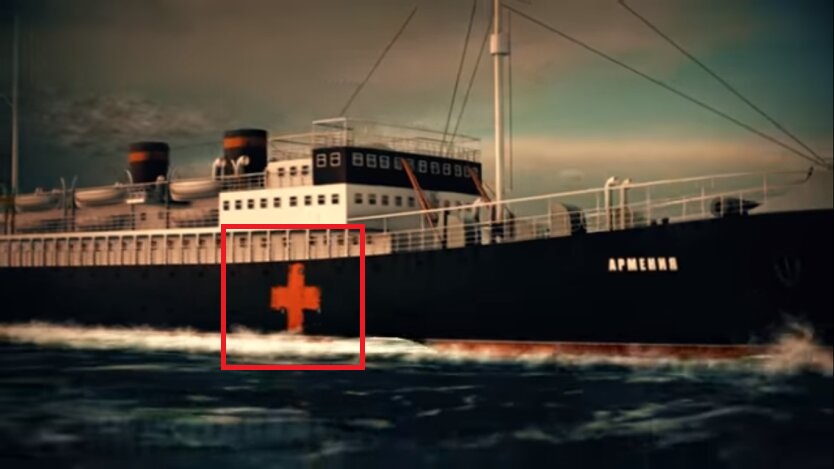 The symbol of the International Red Cross Committee was marked on the motor ship.

Most hospital ships were attacked by German aircraft, which was considered war crimes. In the ship’s defense, four 21K cannons and four 12.7 mm machine guns were installed.

The death of the motor ship:

Around 17:00 on November 6, 1941 the Armenia, led by Captain-Lieutenant Vladimir Yakovlevich Plaushevsky, hurriedly left the port of Sevastopol, evacuating approximately 4.5 to 10,000 people from the following groups: displaced residents, staff and patients from 23 military and state hospitals, as well as the leadership and staff of the “Artek” pioneer camp, their family members and part of the party leadership of Crimea.

It made its first stop in Port Yalta at 2:00 on November 7, where it took on board several hundred more people and some cargo. At 8:00 the ship left the port, escorted by SKA 0122.

Headquarter operatives report that at 11:25 a bomber struck the Armenia with two torpedoes, most likely belonging to the 1st squadron of the air group I / KG28, commanded by Oberst Ernst-August Roth and armed with torpedo bomber Heinkel He-111. German reports confirm record attacking another convoy of three transport ships on the same day, probably TR Voroshilov, Kommunist, in the vicinity of Laspi Bay.
It sank within 4 minutes.

Imagine the Heinkel 111 approaching the Armenia from the coast at a distance of 600 meters and simultaneously dropping both torpedoes, which almost simultaneously hit the port side of the ship under the wheelhouse (in principle, this is the bow, as indicated in Soviet reports). The German report literally translates as “large military transport sunk by two torpedoes.” After the contact explosion of the first torpedo, the second detonation occurred, which was still at some distance from the side. The warhead of the German lufttorpedo LT-F5b airborne torpedo was 185 kg, so 370 kg of explosives hit the side of “Armenia”, which was more than enough to cause a huge explosion to scatter all the structures above the site of the explosion. In addition, a powerful double explosion was supposed to make a huge hole and sweep away the structures inside the vessel, which explains such a rapid flooding of transport. 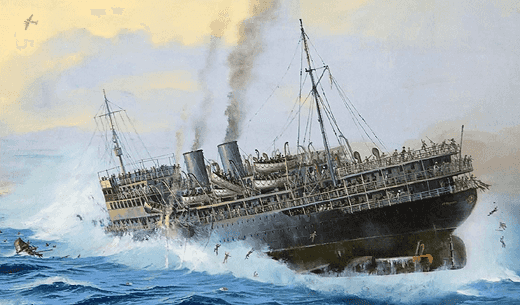 The picture, which depicts the moment of the death of “Armenia”.

5,000 people reportedly perished, with some estimates increasing to 7-10 thousand people years later. Only eight were saved. The Armenia catastrophe is one of the largest in world history, in terms of the number of victims.

Search for the remains of a dead ship:

In the 2000s, the Marine Heritage Department of Ukraine began prospecting at the alleged site of the ship’s sinking, but it hit a dead end.

In 2006, at the request of the Ukrainian side, the United States Institute of Oceanography and Oceanology (NOAA) joined the work under the direction of Robert Ballard. The Americans found a lot of interesting objects in the alleged area of ​​the ship’s loss, but Armenia was never found during this project.

Finally, the remains of the ship were discovered in 2016, 18 miles from the coast at a depth of 1,500 m by an expedition of the Russian Geographical Society. 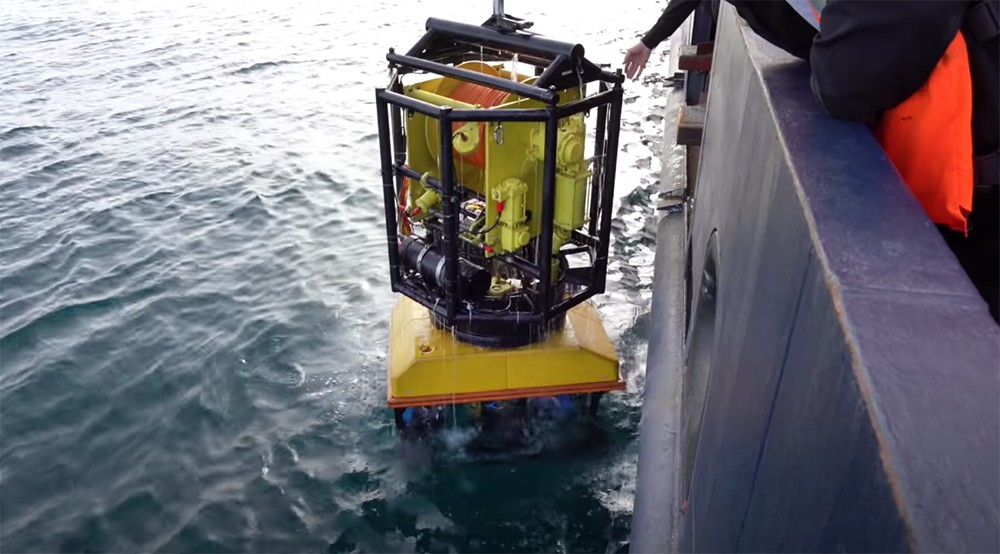 The bathyscaphe sets off in search of “Armenia.” Author: © urc-rgs.ru 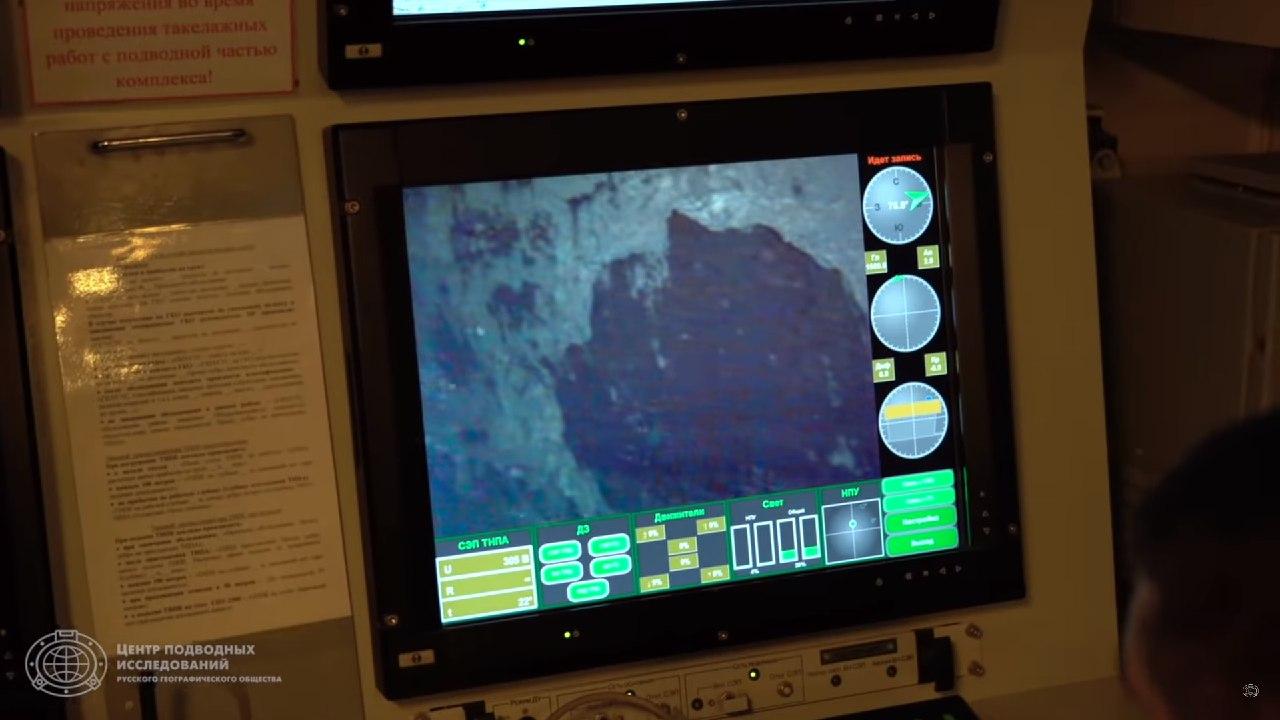 That’s what researchers see when they search using the bathyscaphe. Author: © urc-rgs.ru

During the next expedition, a remote-controlled unmanned underwater vehicle captured the first underwater shots of the wreck. Fragments of the deck and other elements were discovered. During the inspection, photos captured characteristic features of the Armenia, such as the location of decks and peculiar openings in the guard rail.

According to the scientists, doubts were dispelled after the ship’s bell is was discovered on the deck, on which the inscription Armenia was clearly read. 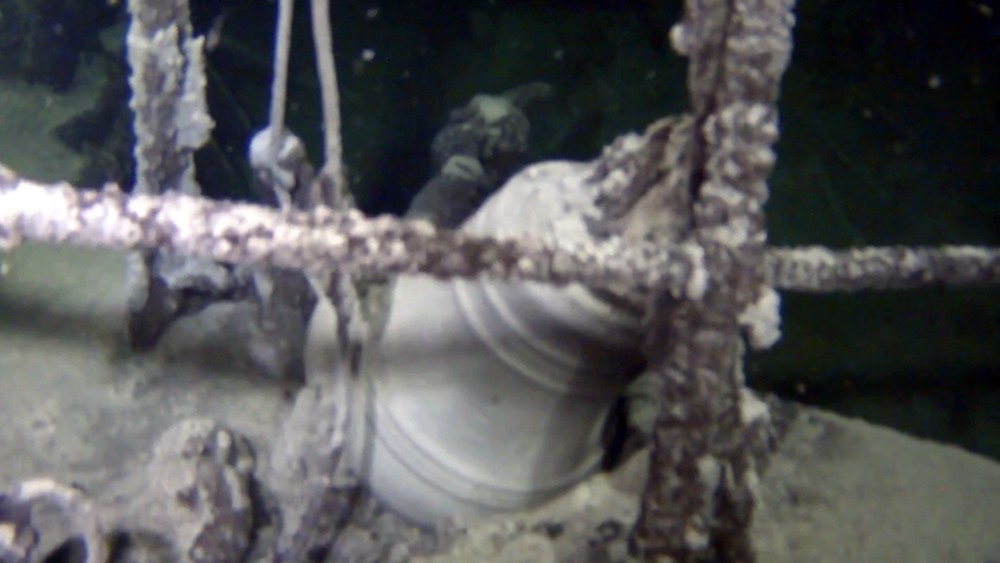 If you look closely, the inscription “Armenia” is visible on the ship’s bell. Author: © urc-rgs.ru 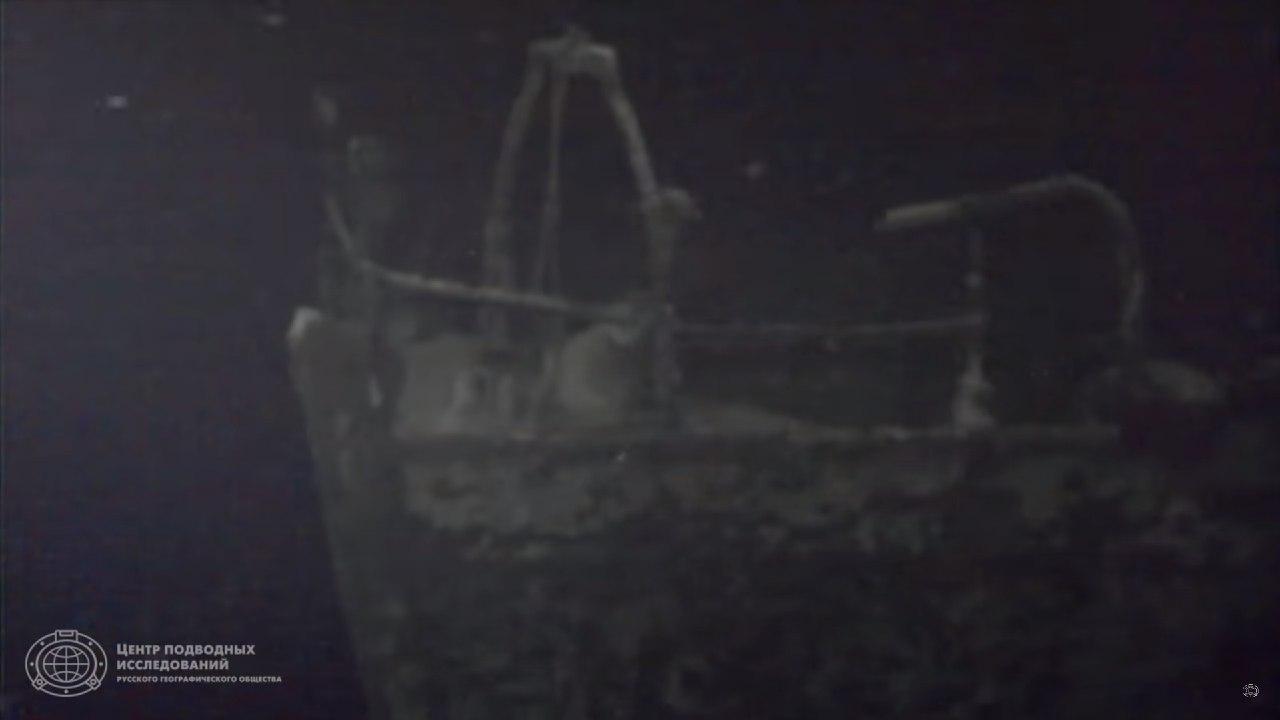 The bow of the ship “Armenia”. Author: © urc-rgs.ru 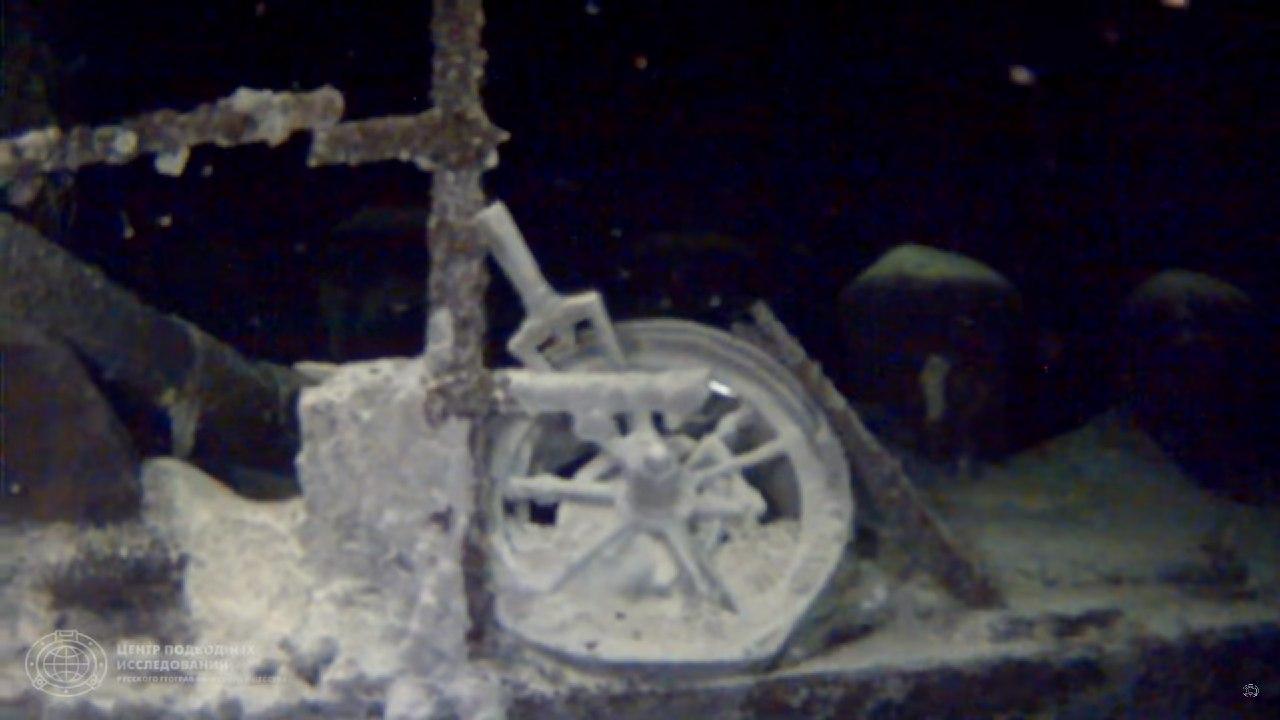 Details of a ship that is being explored using a bathyscaphe at a depth of 1,500 meters. Author: © urc-rgs.ru 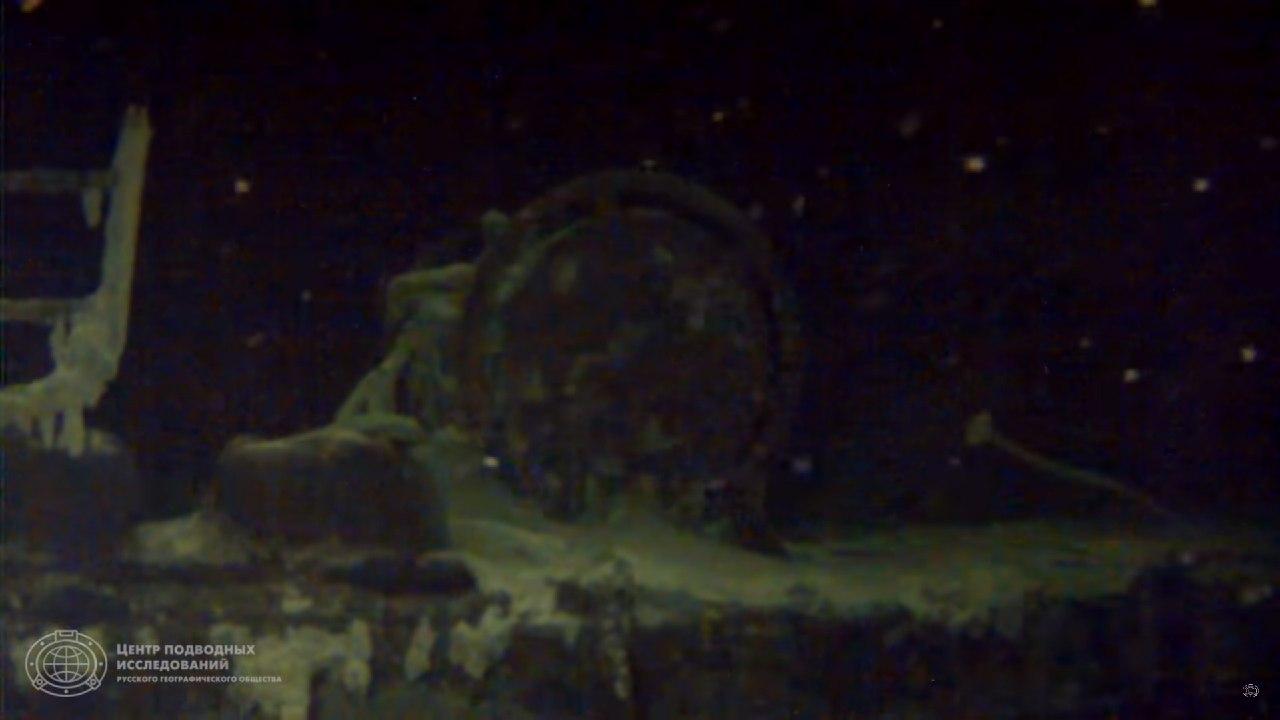 Details of a ship that is being explored using a bathyscaphe at a depth of 1,500 meters. Author: © urc-rgs.ru

During the final dive, the robot examined the port side, but the destruction was so vast that scientists couldn’t even estimate the number of explosions that destroyed the Armenia. It became clear that the object did not split into parts, it stands on an even keel with a course of 220 as a single fragment at a depth of 1.5 kilometers. The distance from the coast is 18 nautical miles (more than 33 kilometers). The hull is covered with a layer of silt. The main damage occurred on the middle and bow of the superstructure closer to the port side, which may indicate aircraft bombing at the direction of the ship, that is, German planes attacked from the stern, the researchers said.

According to the expedition, no new dives to the Armenia are expected.