We again came to the Leningrad forest, where there was once a front. Searching for relics with a metal detector has become a part of our life. This time we carried out excavations at the positions of the Wehrmacht army. Enjoy the reading.

It was a warm October day. We arrived at the location of the Wehrmacht army. More than 70 years have passed since the military events, but everything around reminded of the past. The entire territory was covered with German trenches and dugouts, which kept the history of that war. Having chosen the dugout we needed, we proceeded to excavate it.

The first find was a wooden military box for storing artillery shells. On the surface of the box were inscriptions in a familiar font. 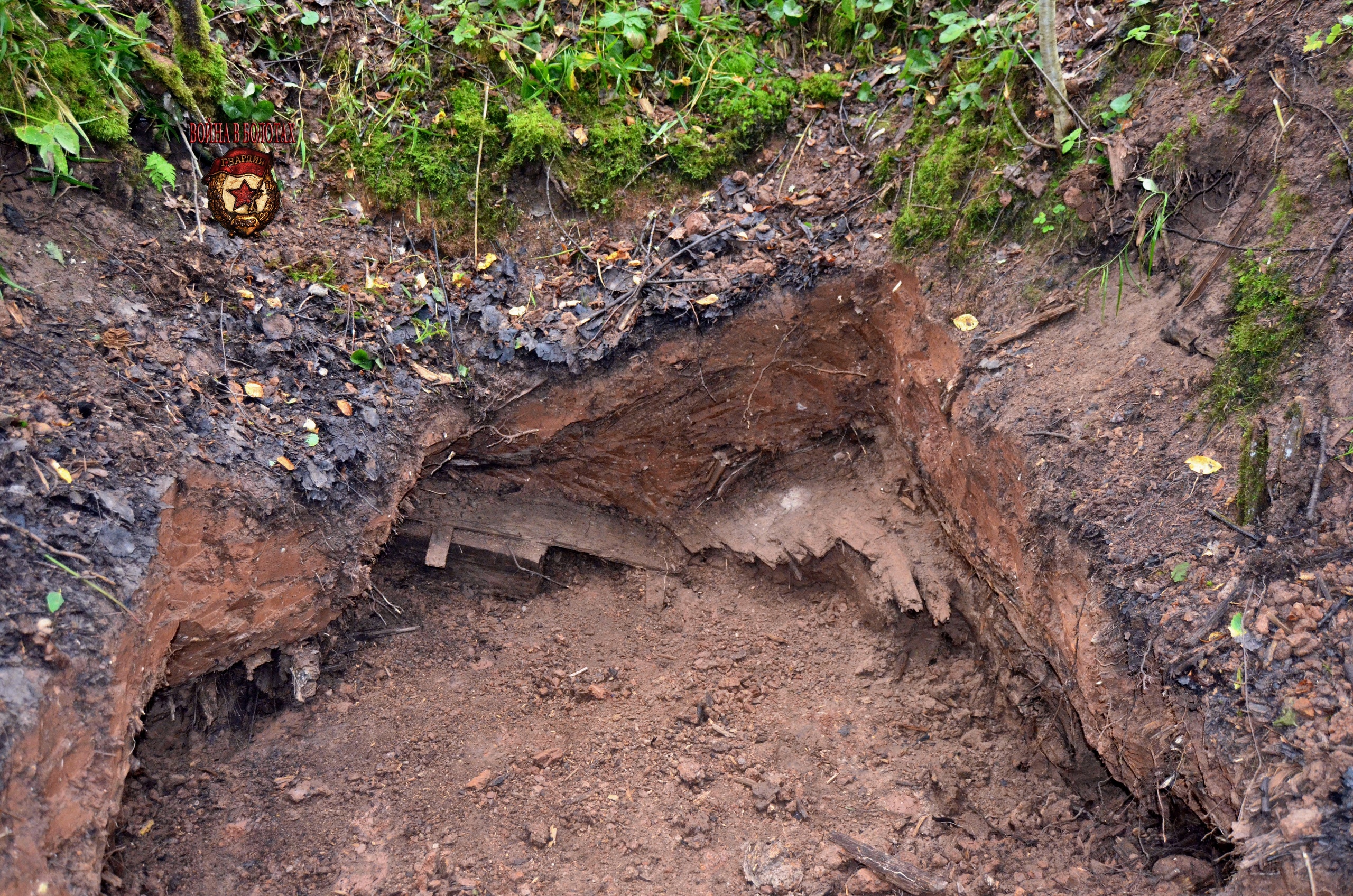 Looking closely, you can see a German artillery box under a layer of clay. Photo from @swamp_war

Half an hour later, there were already several boxes like that one. There was also an iron box for storing M-24 grenades along with wooden boxes. 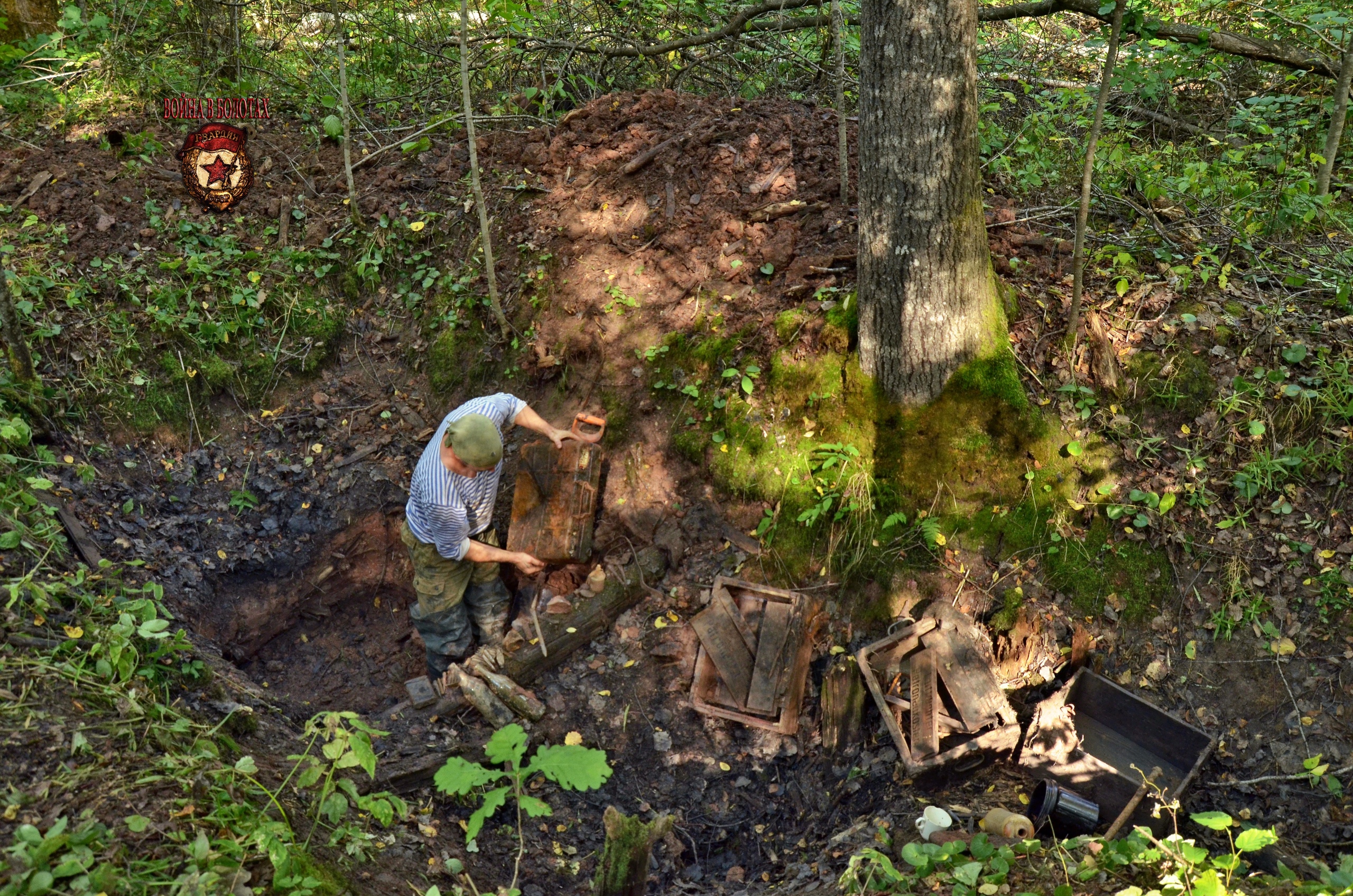 Under the boxes I found a large number of household items (alcohol bottles, a cleaning kit for a Mauser 98 carbine, tent pegs, etc.). Photo from @swamp_war 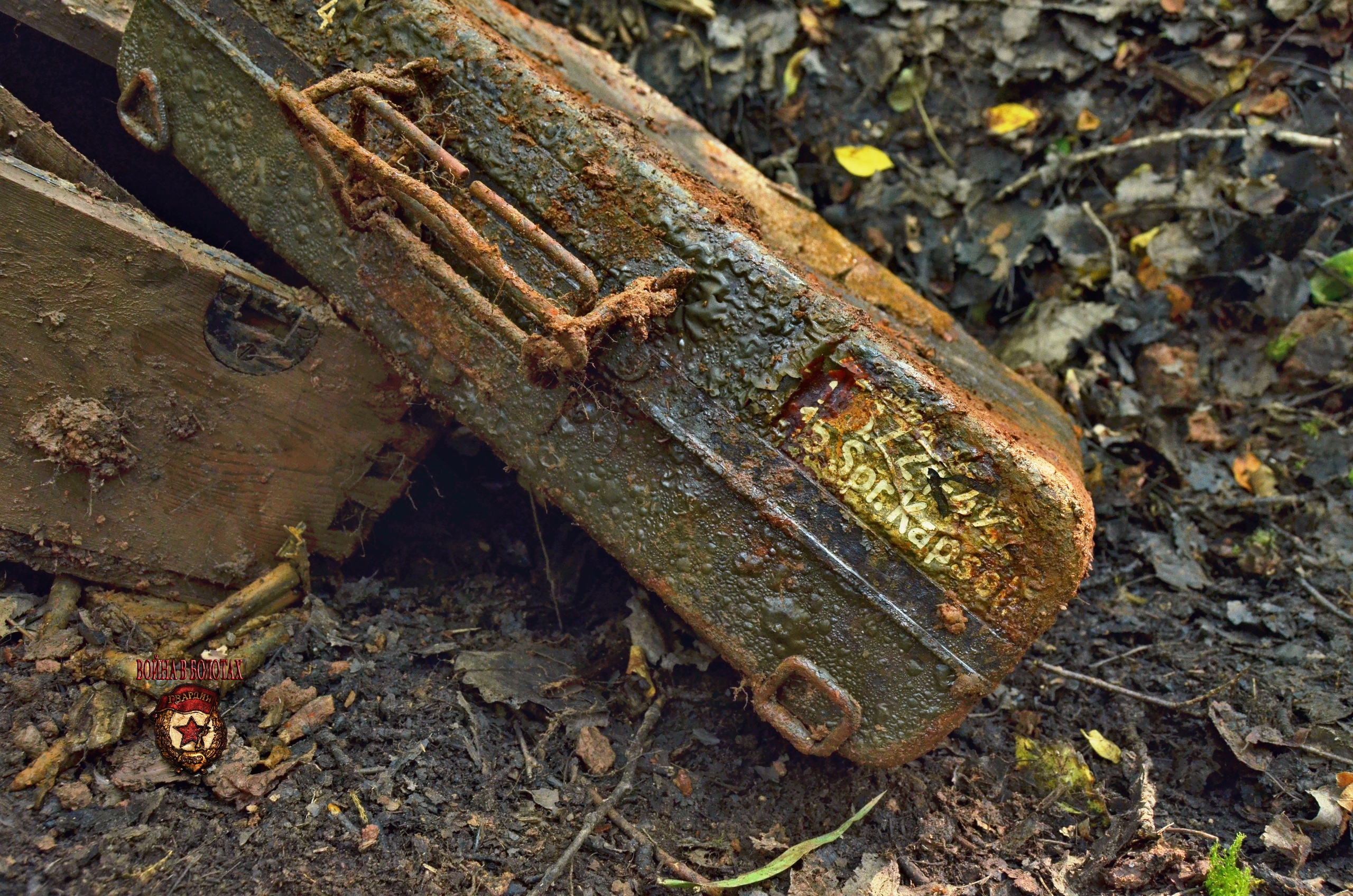 An empty box in which the soldiers of the Wehrmacht army kept their M-24 grenades. German soldiers loved to use this grenade, because thanks to the wooden handle it was convenient to throw the grenade at a long distance. Photo from @swamp_war 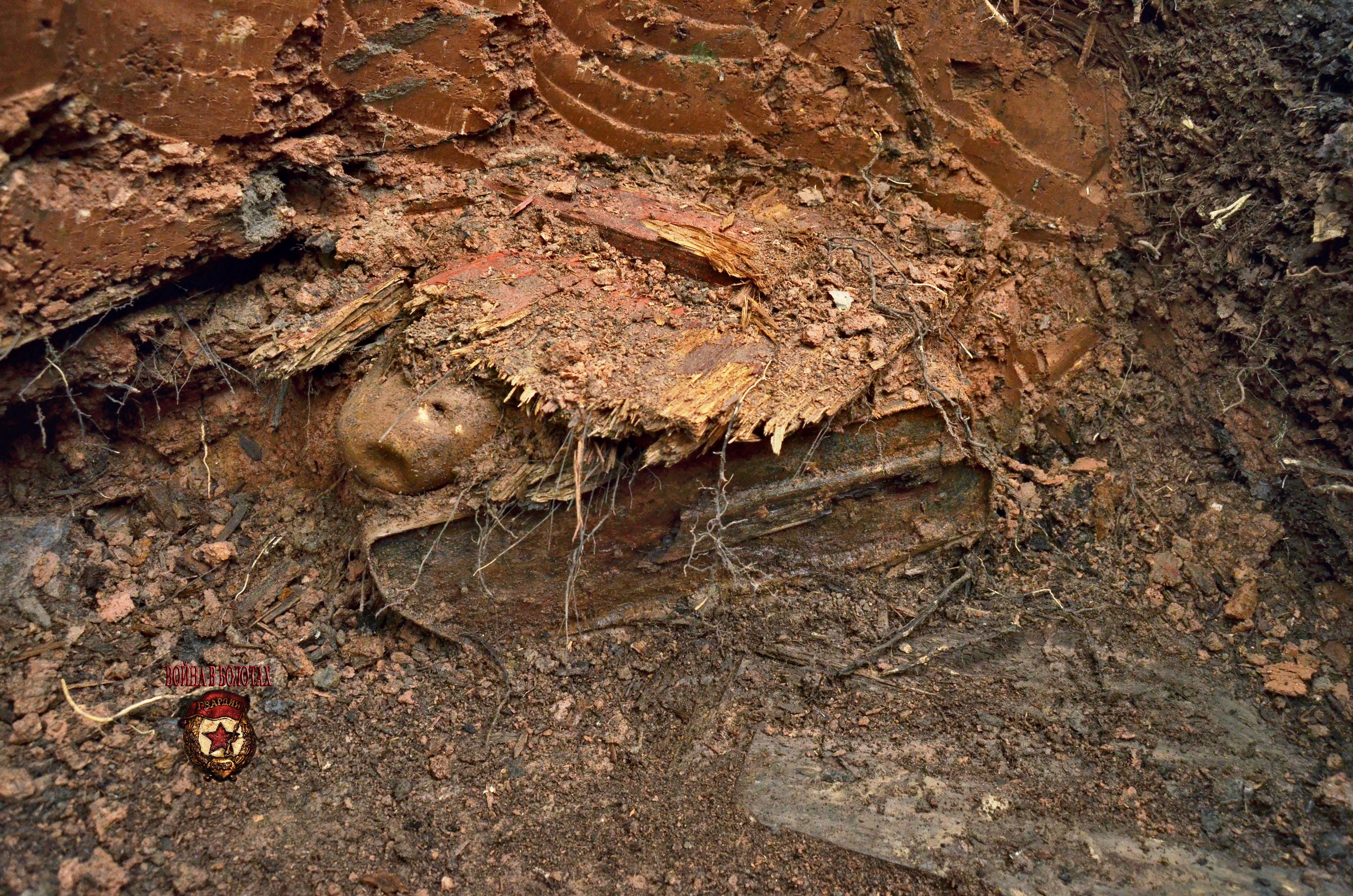 There is a German aluminum flask on the box. Often these flasks are crushed by a layer of soil and clay. Photo from @swamp_war

Suddenly, among the remains of the wooden walls of the dugout, I found a white porcelain cup. Unfortunately the cup was slightly damaged. However, it took its rightful place in my collection of tableware. At the bottom of the cup there was a stigma indicating that this cup was made in Holland. 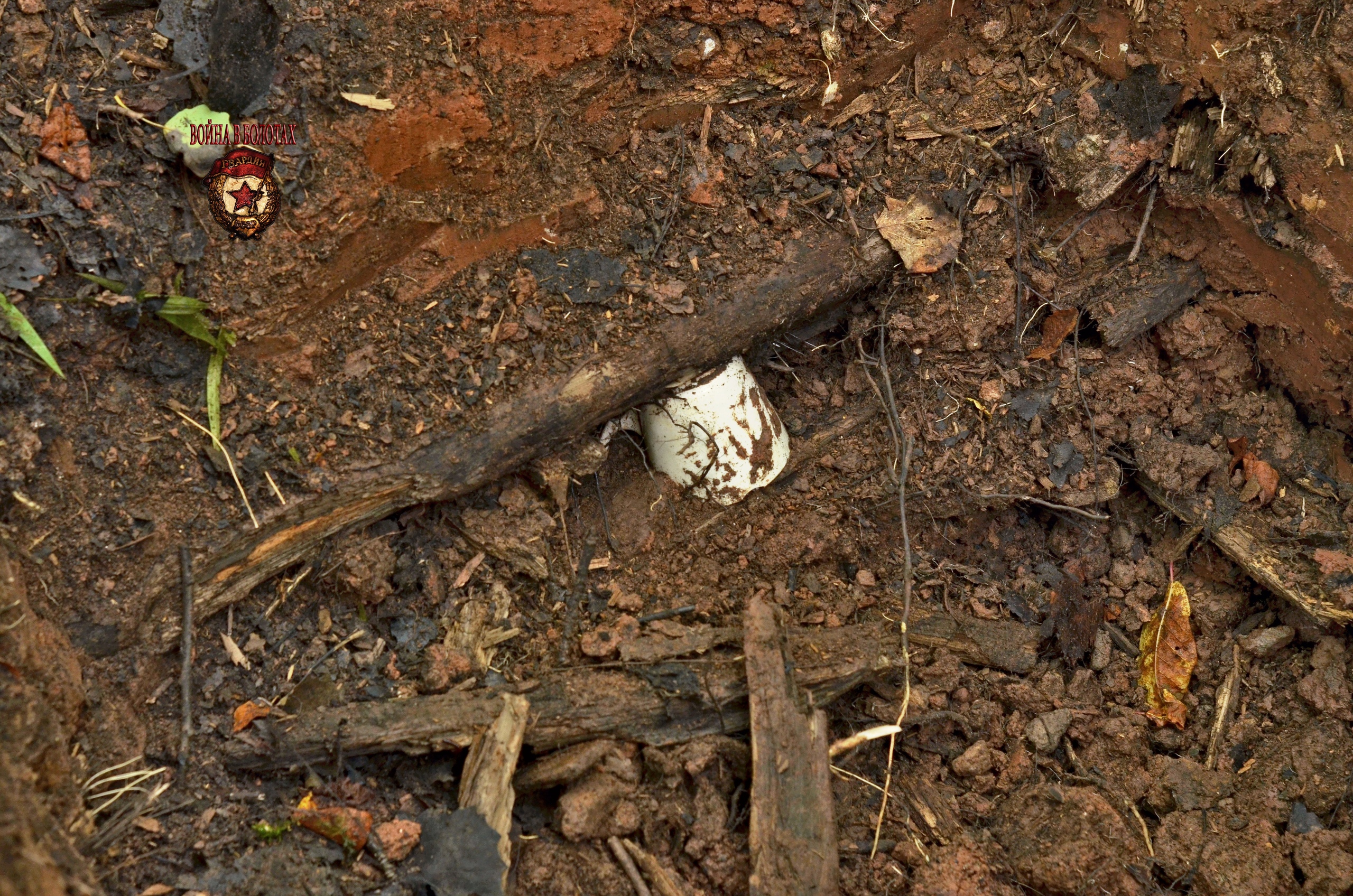 The cup was sandwiched between the logs. It was very difficult for me to get it without breaking it. Photo from @swamp_war 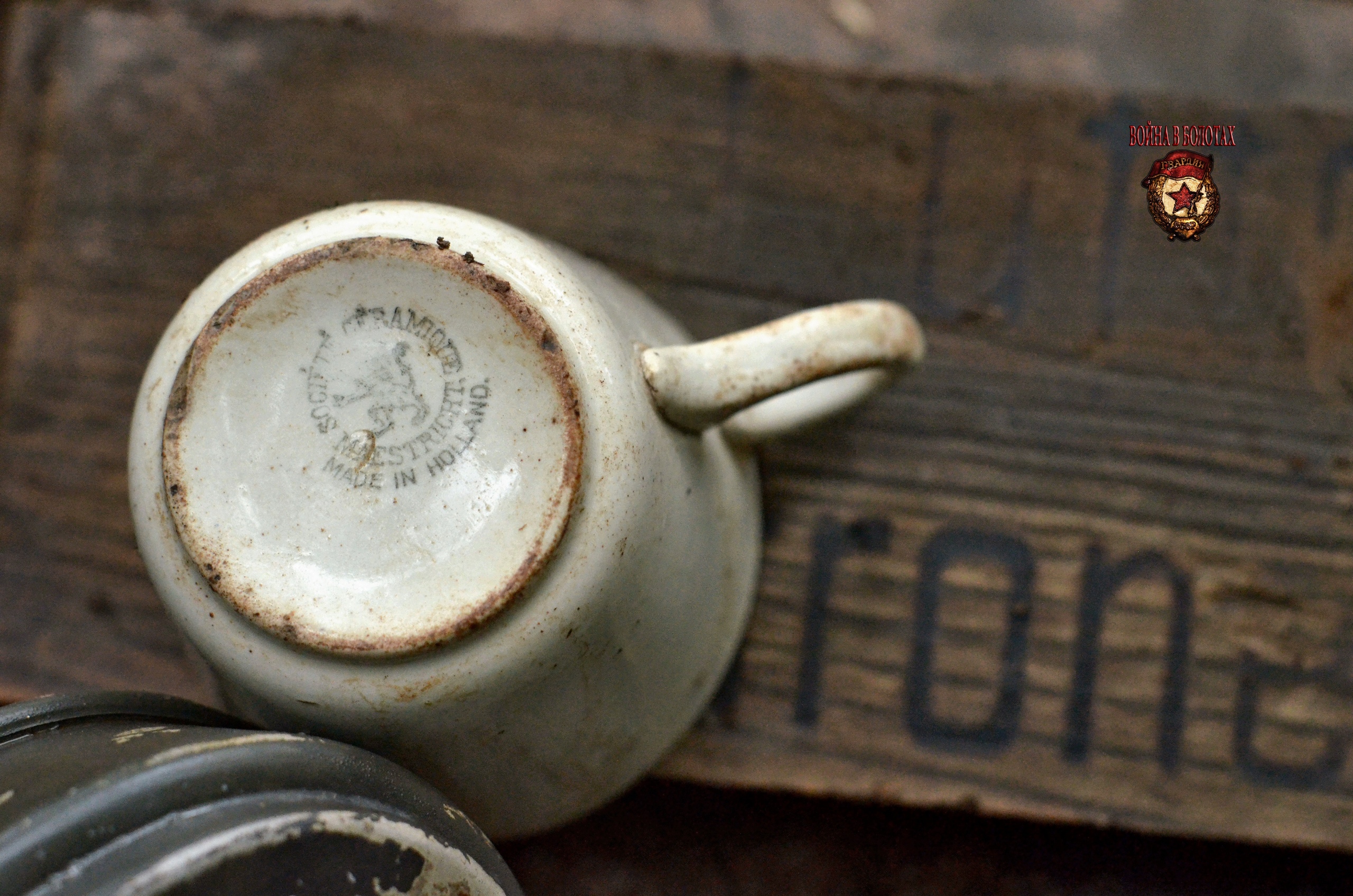 A lion was also depicted at the bottom of the cup. Photo from @swamp_war 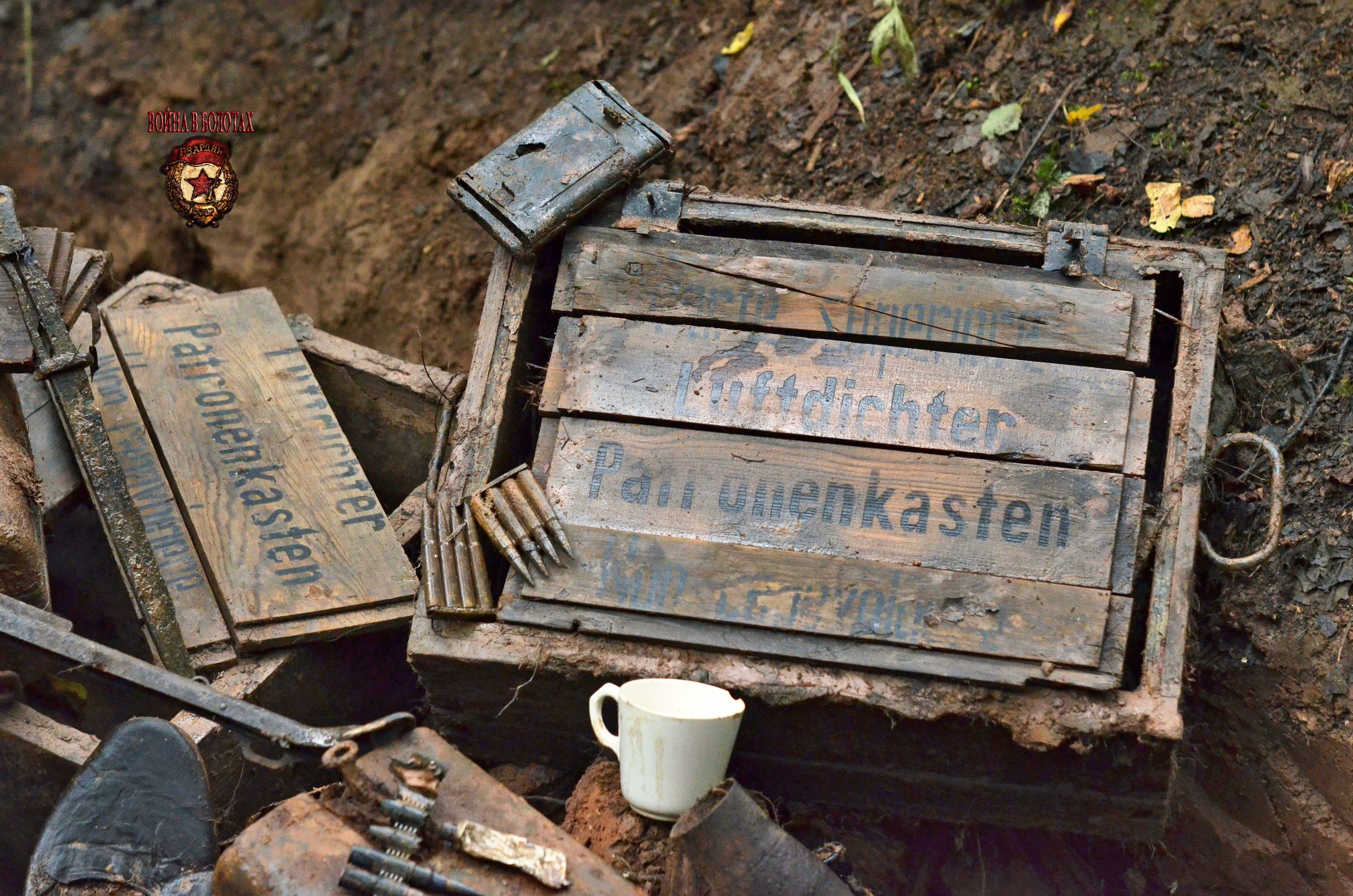 In just a couple of hours, I was able to find many relics. Photo from @swamp_war

Approaching the bottom of the dugout, I dug a lid for a German aluminum pot. The lid has been covered with original feldgrau paint. 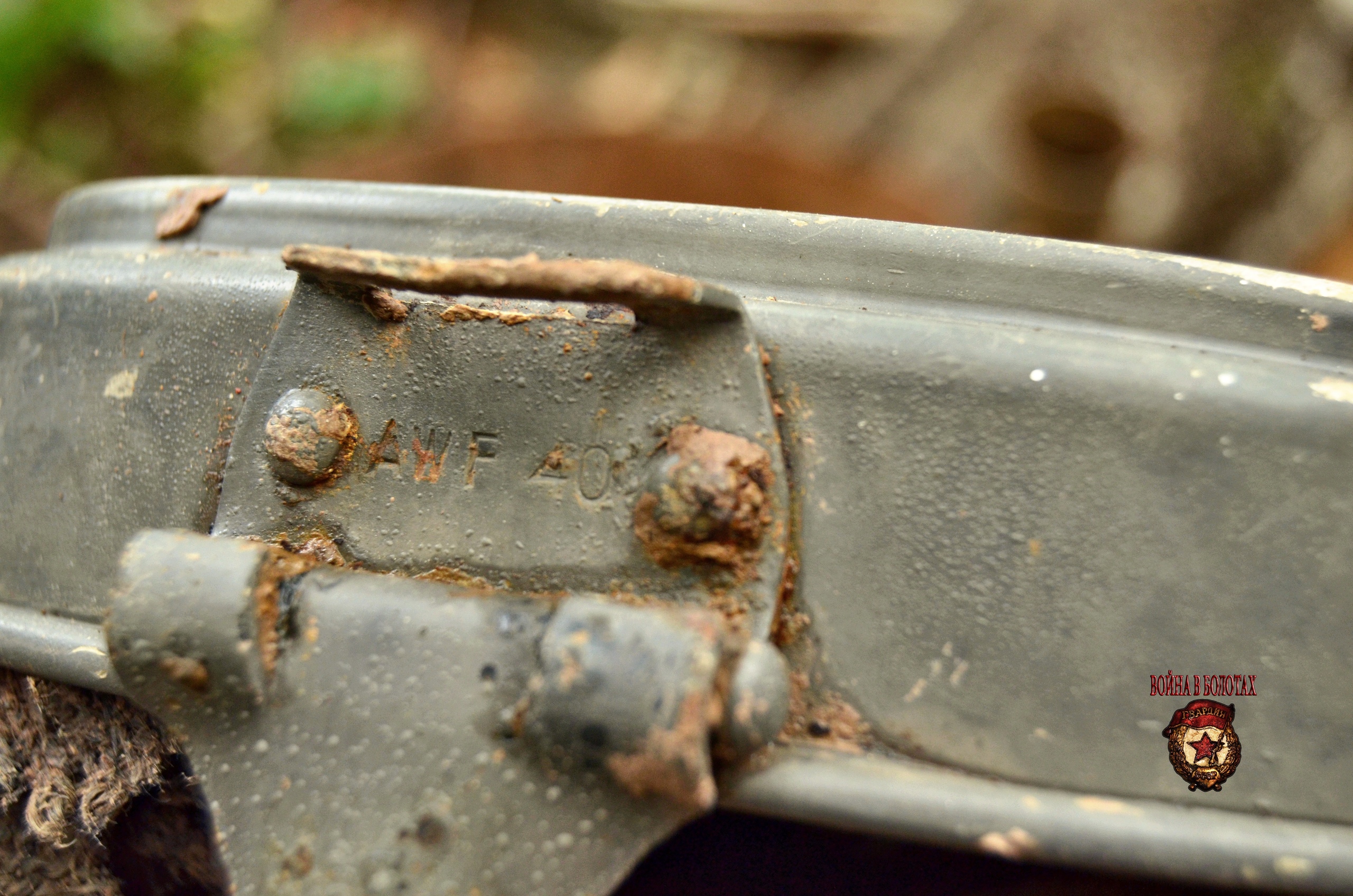 Feldgrau (field-grey) is a greenish grey color. It was the official basic color of military uniforms of the German armed forces from the early 20th century until 1945 (West Germany) or 1989 (East Germany). Armed forces of other countries also used various shades of that color. Feldgrau was used to refer to the color of uniforms of the armies of Germany, first the Imperial German Army and later the Heer (ground forces) of the Reichswehr and the Wehrmacht. Photo from @swamp_war

Read: Here’s what you find in a German dugout (13 photos)

It took me about 6 hours to excavate this dugout. During these 6 hours I managed to dig up a huge amount of relics. Many detectorists spend several weeks to find so many items. One of the very interesting finds was a bipod for the famous German MG-42 machine gun (Hitler’s buzzsaw). Unfortunately, the machine gun itself was not found by me. 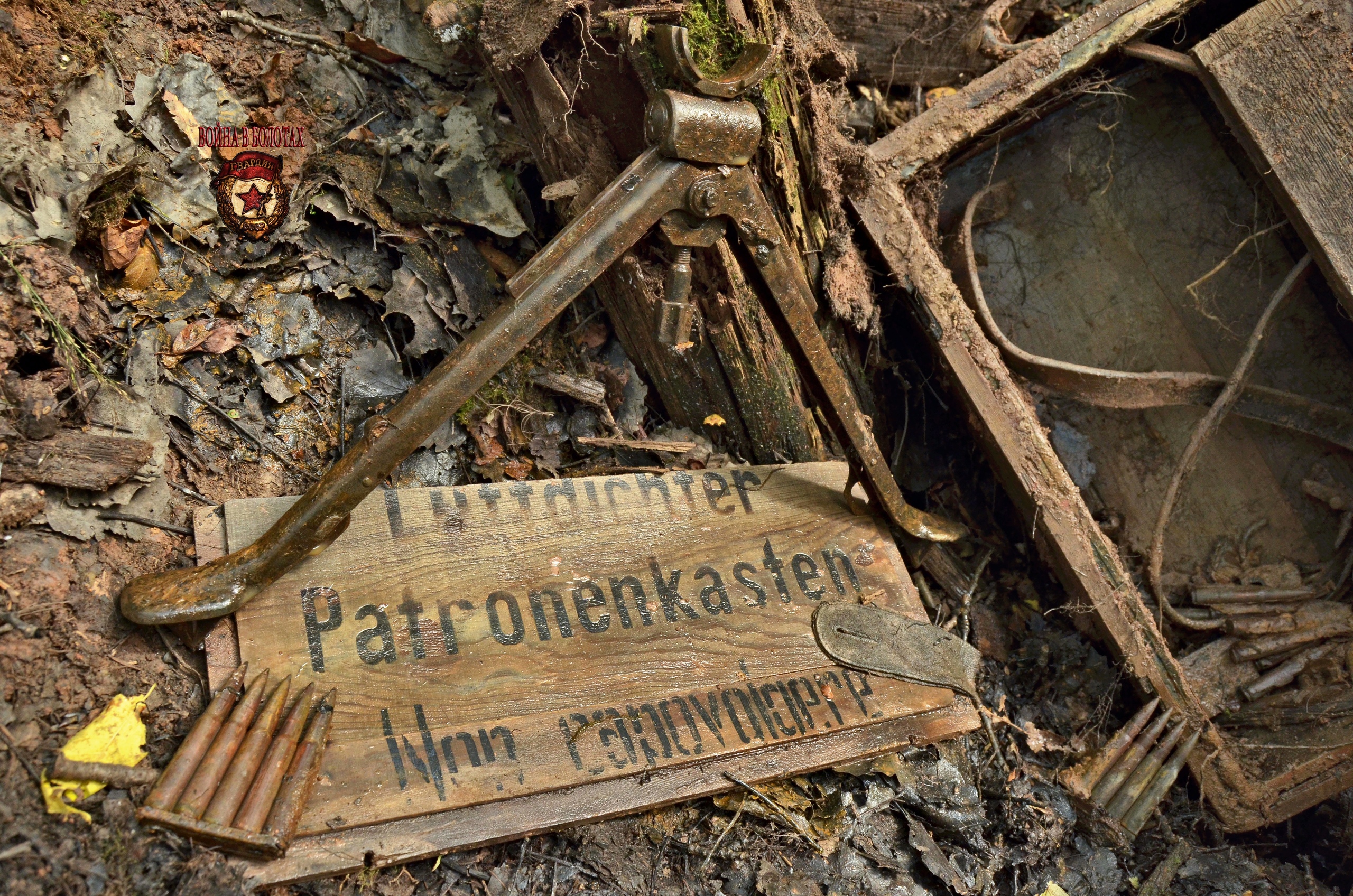 In total, there were over 100 items in this dugout. All relics will be donated to the local WWII museum.

I hope you were interested. You can find videos of these and other excavations on the YouTube Channel. Thank you for your attention. 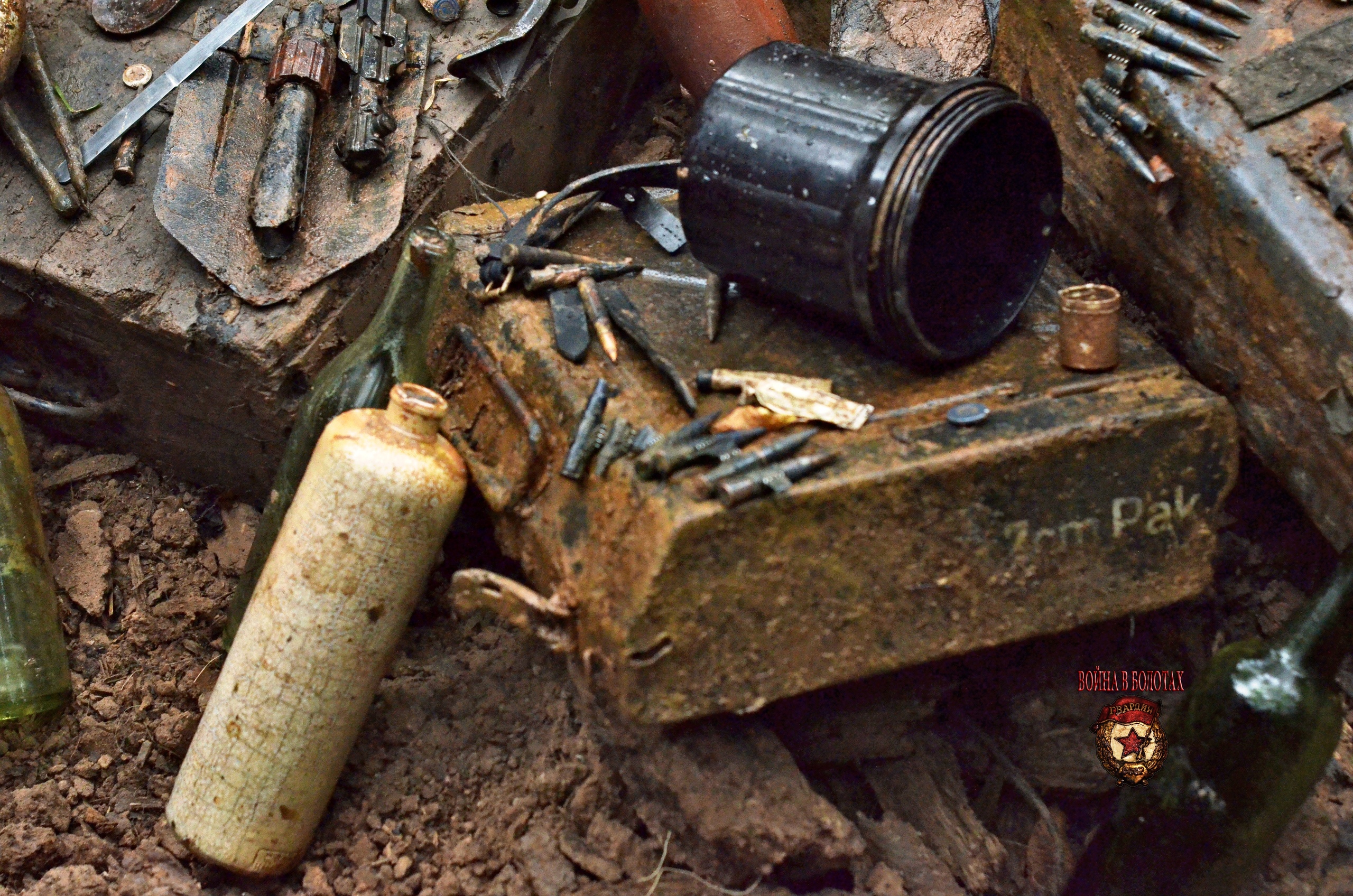 All the finds from that day. It was a very interesting German dugout. Photo from @swamp_war 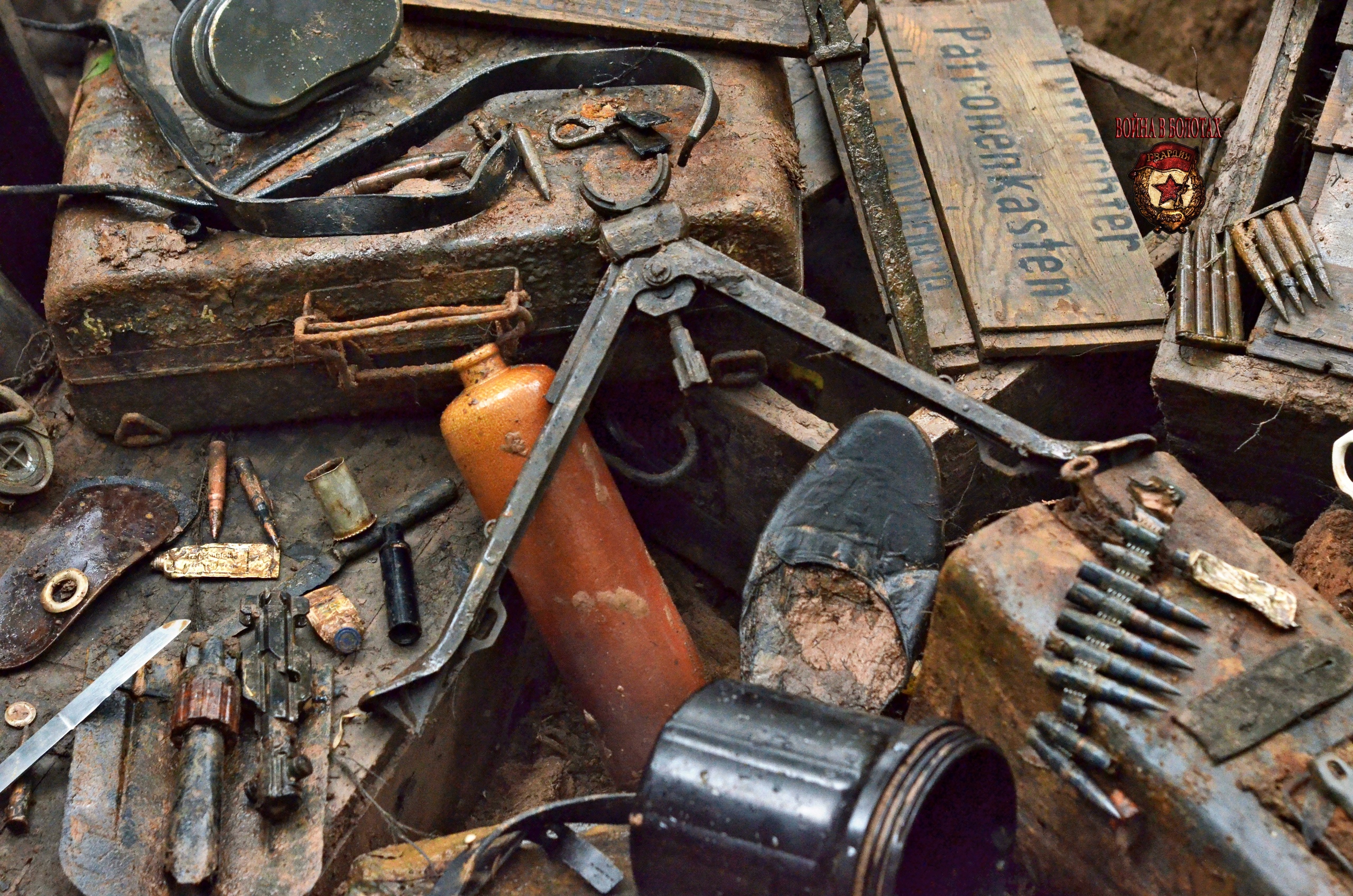 All the finds from that day. It was a very interesting German dugout. Photo from @swamp_war

Hello dear reader! This time again I will tell you about the excavation of the relics with metal detector of the Second World War. On ... Read More

The Gold Star medal is a mark of distinction for persons awarded the title of Hero of the Soviet Union. The medal was instituted in ... Read More