Today I will tell you about German WWII helmet M-40 from Russian swamp (Leningrad front). This helmet has been underground for over 70 years, but it is perfectly preserved. Even the leather details have their original appearance.

My comrades and I arrived in the forest where the military events of the Second World War took place. At a certain location, we found a large pit that was filled with water. On the breastwork of the pit lay a great number of human bones. Most likely, the marauders dug up the remains of the soldiers and abandoned this place, taking the relics with them. We decided to dig this hole.

Having pumped out all the water from the pit, I started excavations. In the first minute, I found many bones dropped in one place. Judging by the accompanying items, they were Soviet soldiers. Unfortunately, most of the remains were destroyed. I took all the remaining bones from the pit. According to my calculations, there were 8 dead soldiers of the Red Army in this pit. Unfortunately, I could not find a single ID. These remains will be reburied with all military honors. 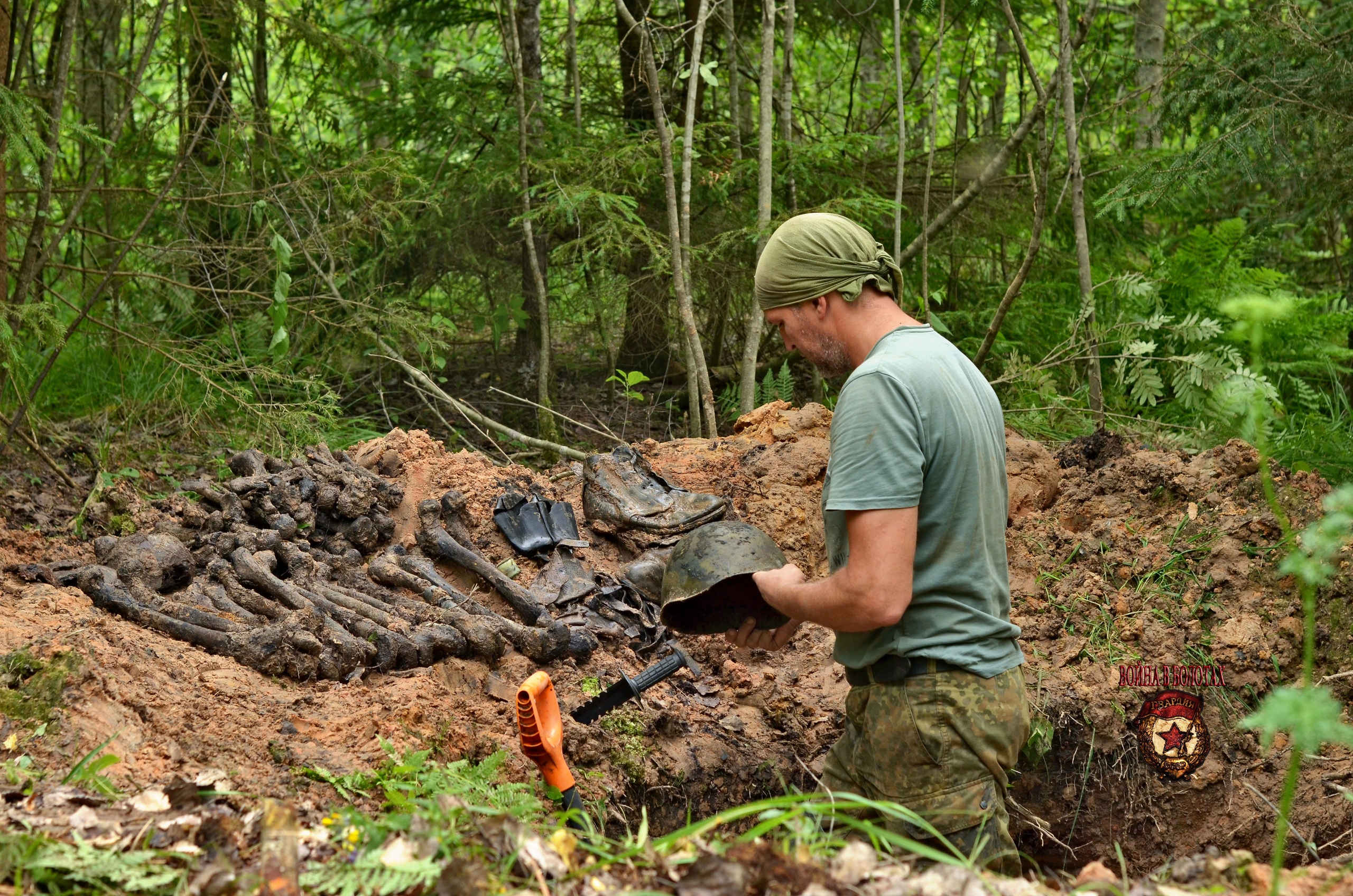 Only large bones have survived. A total of 8 people were lying in this pit. Photo by @Swamp_war. 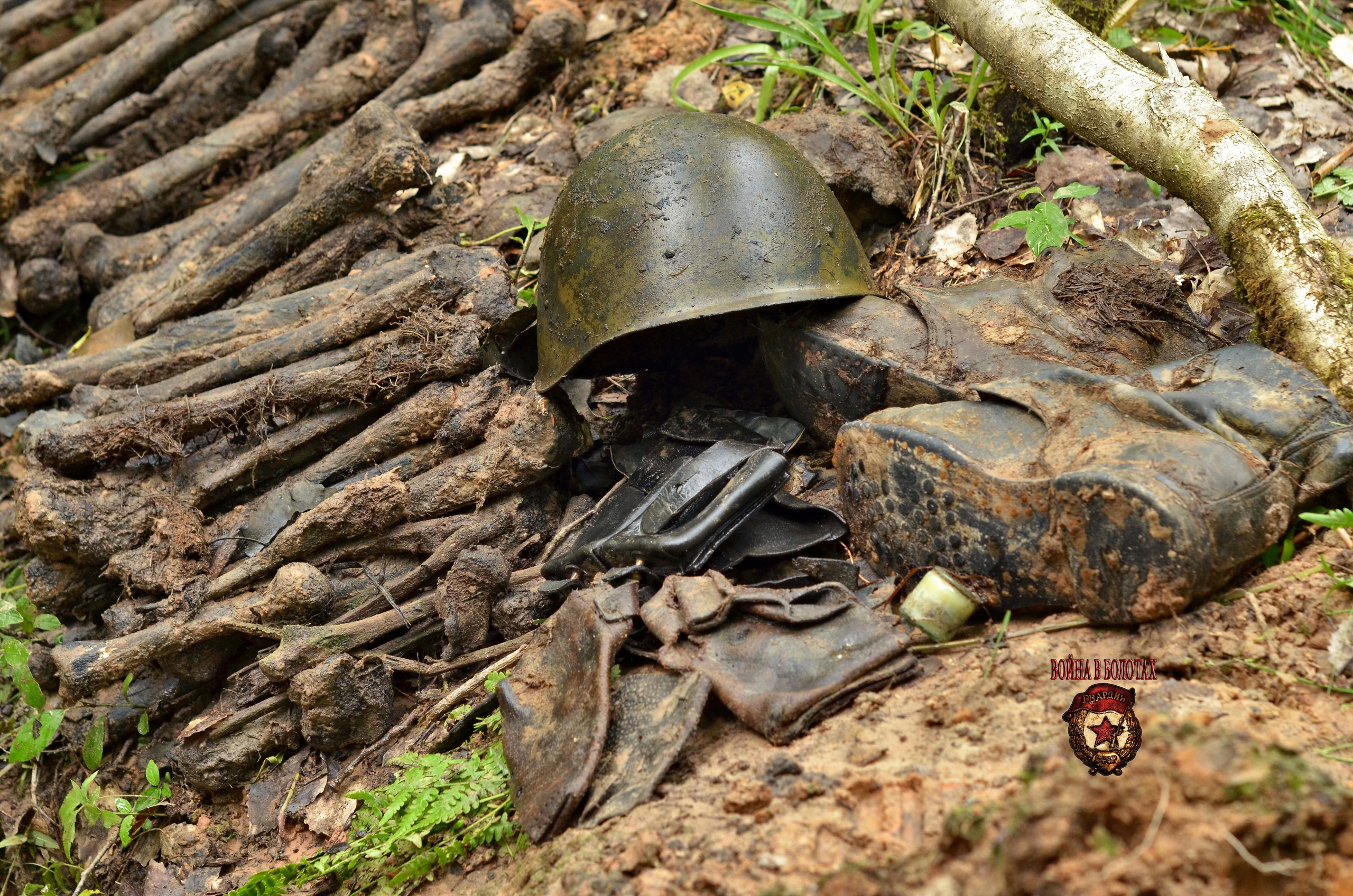 Remains of Soviet soldiers. Most of the bones were destroyed by time. Photo by @Swamp_war.

Having finished working with this dugout, I moved on to the next signal.

Read: Remains of Soviet soldiers, Wehrmacht propaganda leaflets, TT pistol and many other relics of the WWII +18 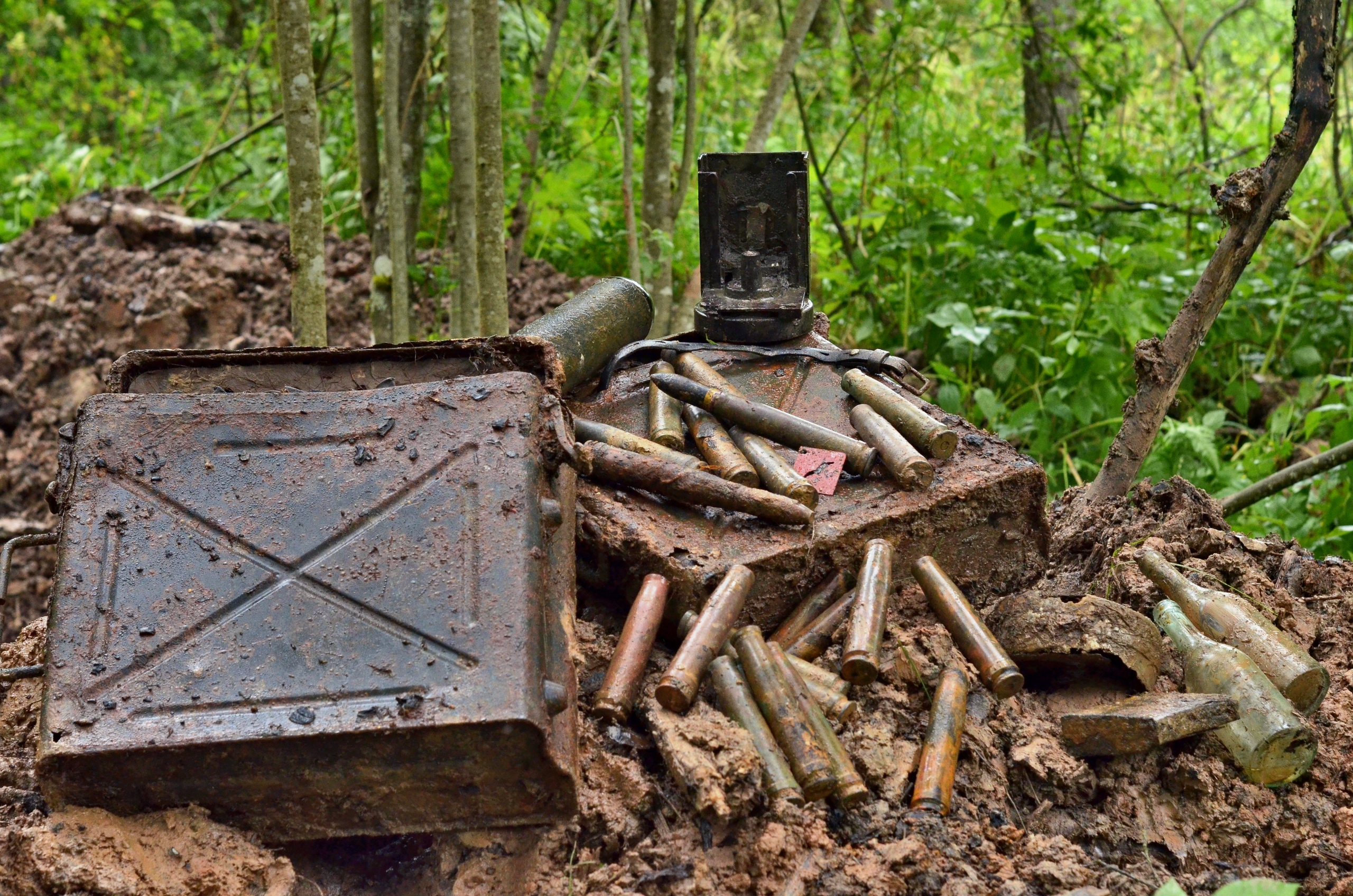 Finds from a German dugout. Leningrad front. Photo by @Swamp_war.

With the help of a metal detector, I was able to detect a strong signal that came from another pit filled with water. The object was not deep, and I decided to reach it with my hands. In the depths of the water, I managed to feel with my hands a familiar silhouette – this is a German helmet. I felt the leather parts with my fingers.

This meant that the helmet should be in good condition. For several minutes I tried to get the helmet out of the clay (the clay has fixed the helmet very firmly for 70 years). Finally I managed to pull out the helmet. I couldn’t believe my eyes! It was a German M40 helmet in perfect condition. The helmet has remained practically unchanged after 70 years – the paint coating has been completely preserved. The decal is also in excellent condition. The leather details seem to have been made yesterday. This is a very cool relic of the World War II. 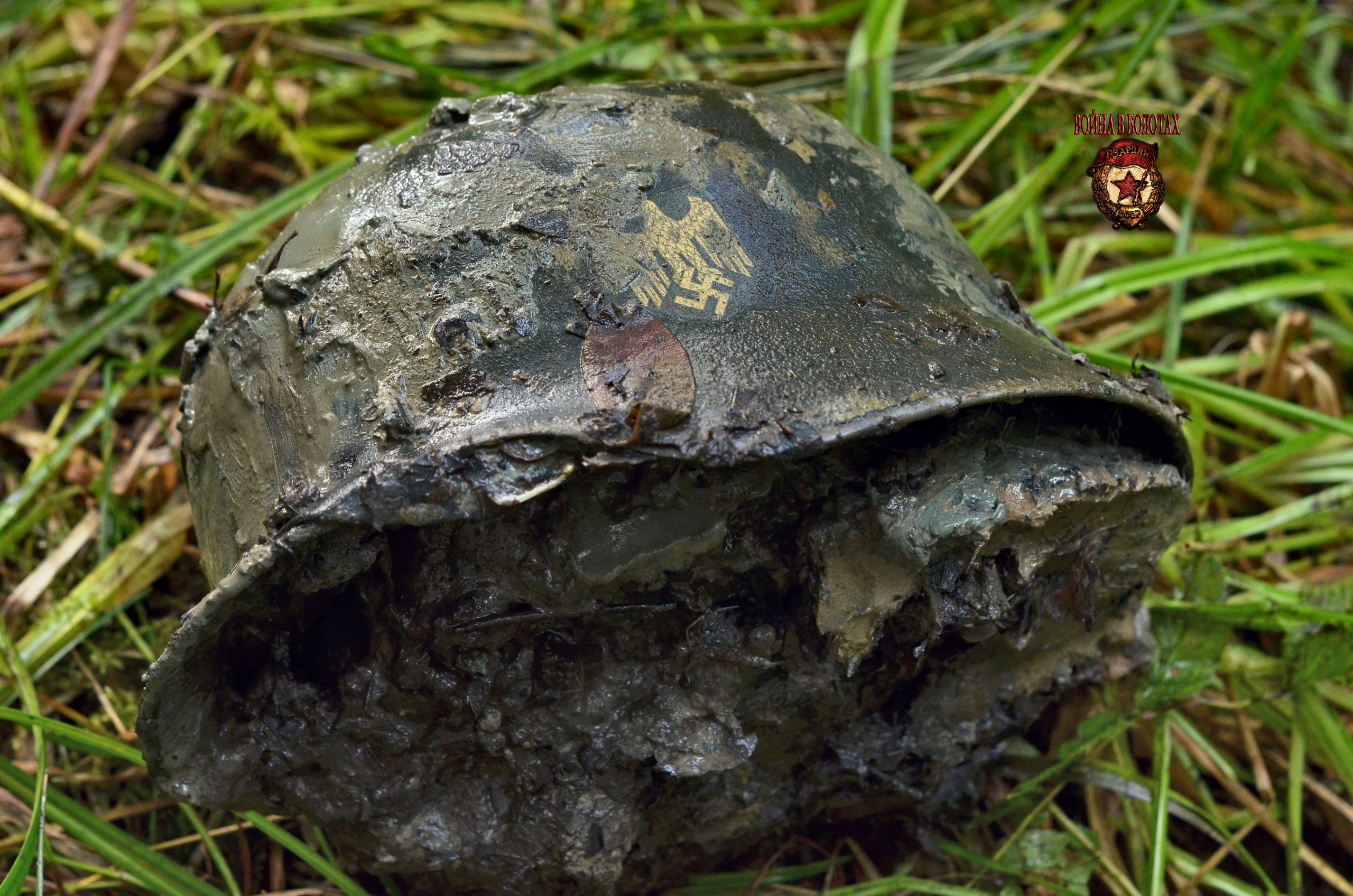 German helmet M-40 from the Leningrad swamp. The absence of oxygen perfectly preserves the metal. Photo by @Swamp_war. 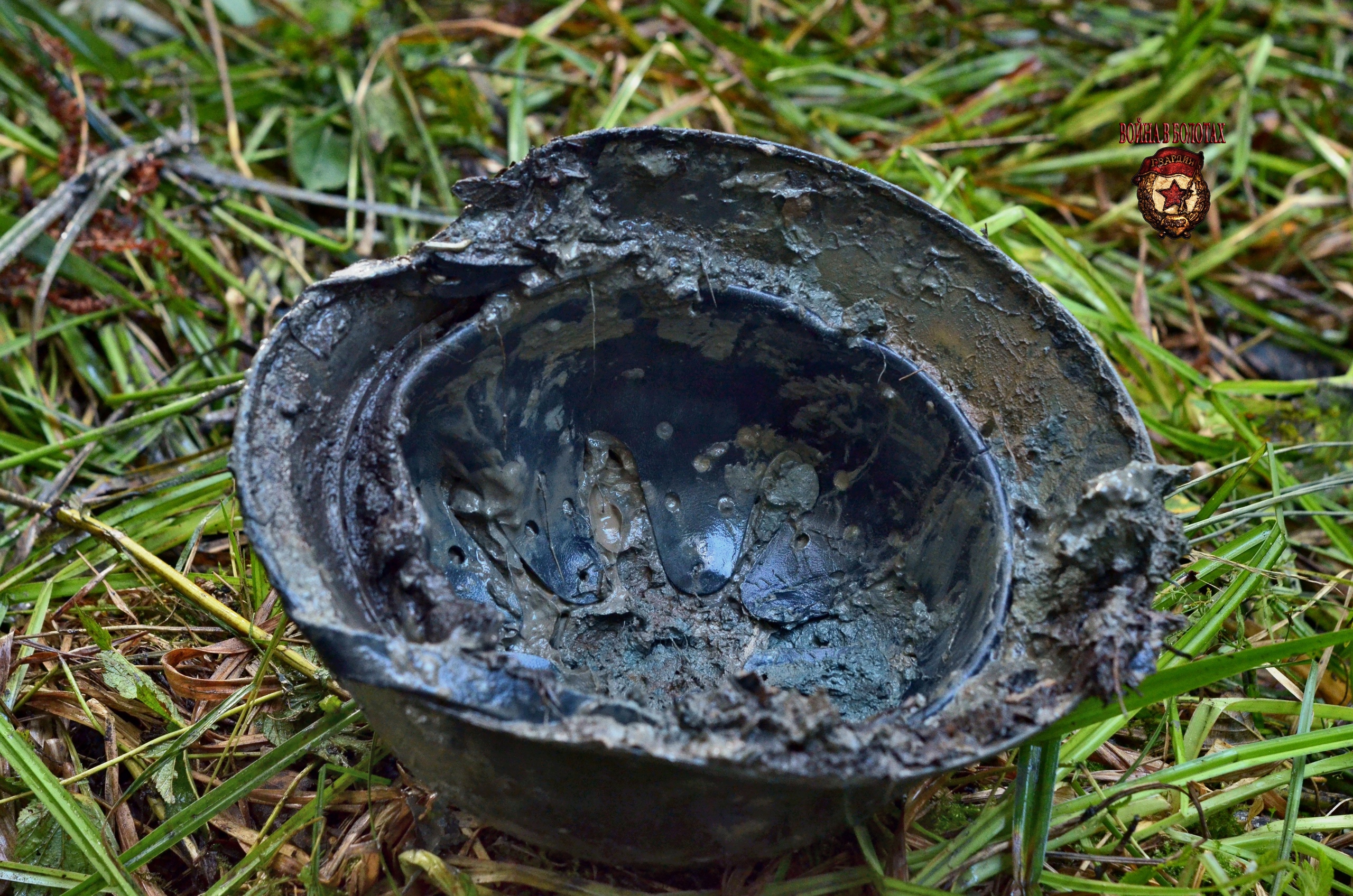 The leather details are also perfectly preserved. Photo by @Swamp_war.

Having washed my helmet with a brush, I was even more surprised. I have never seen helmets from the ground in such a state. It will be a great exhibit at the local museum. 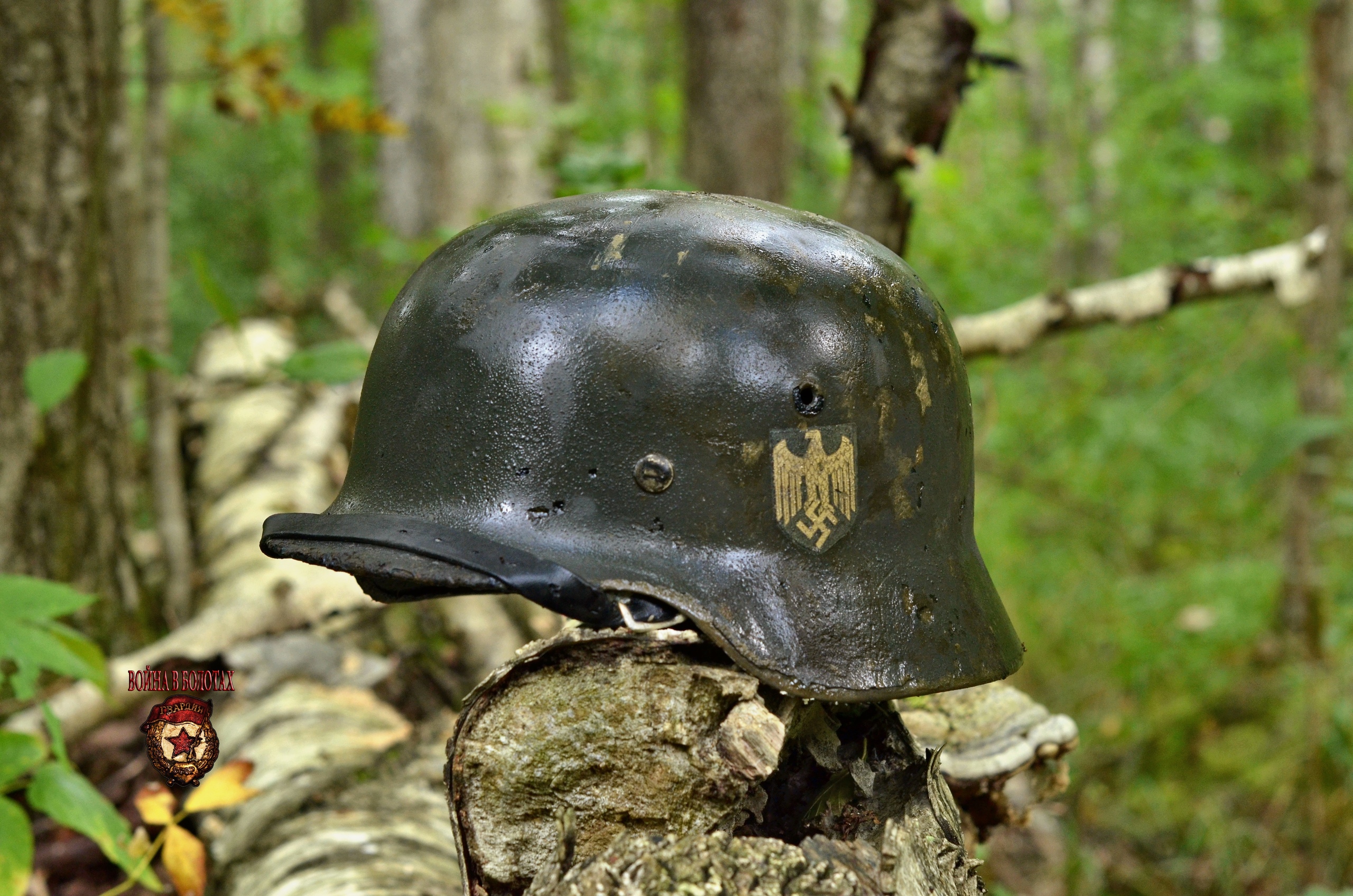 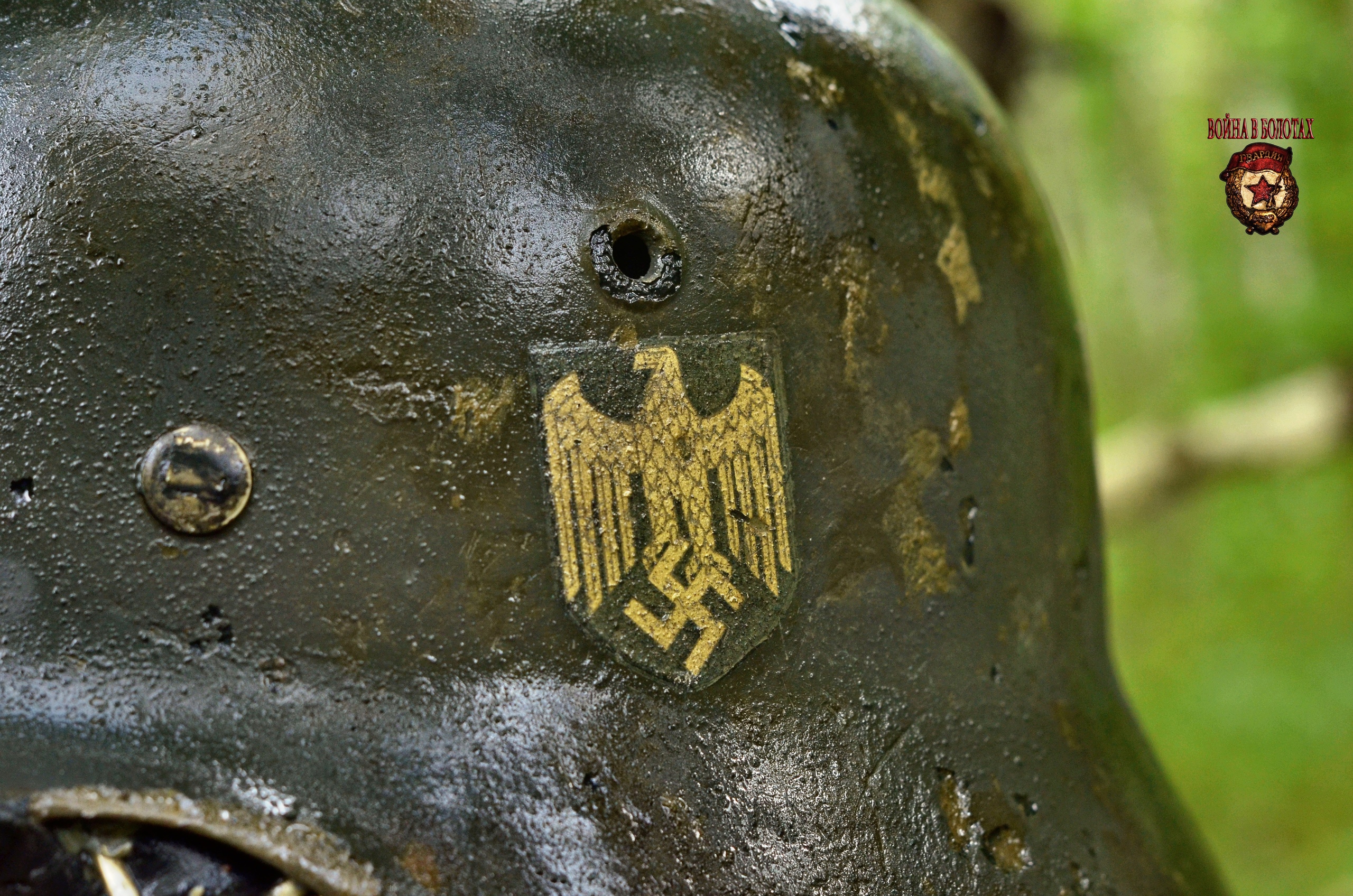 Decal on a German helmet. Photo by @Swamp_war. 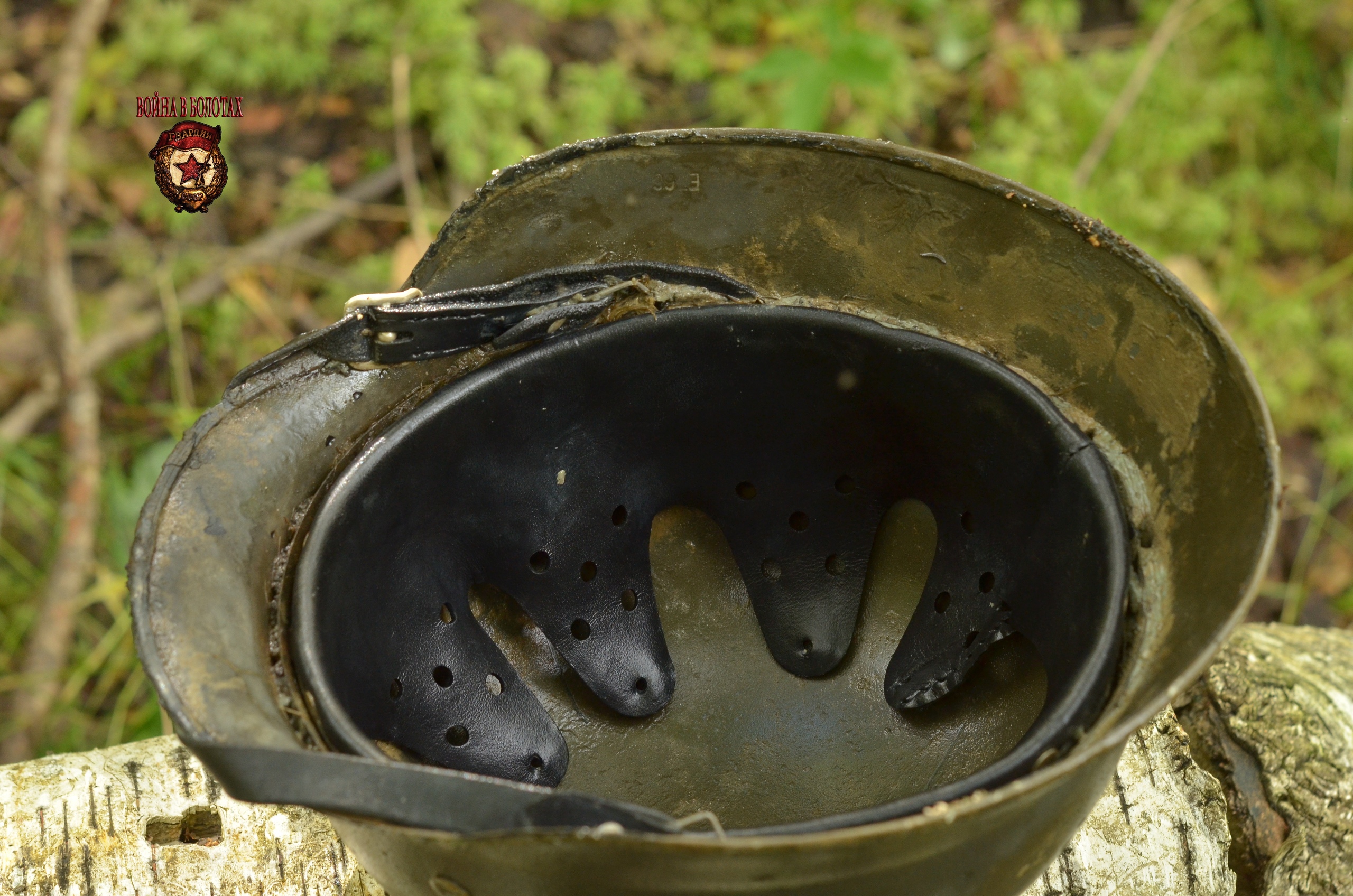 The leather balaclava is also preserved. Photo by @Swamp_war. 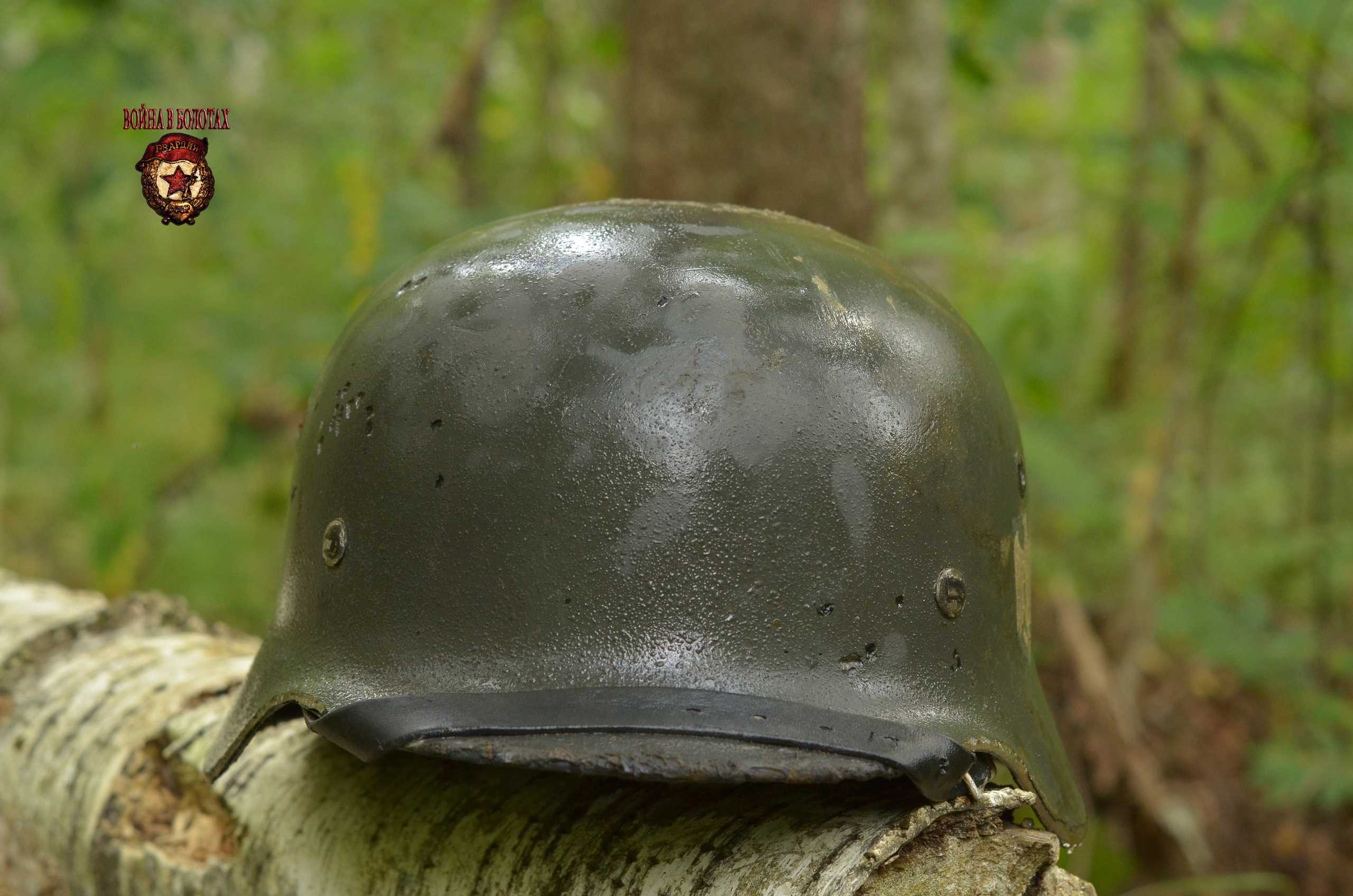 The paint on the helmet is completely preserved. Photo by @Swamp_war.

Continuing the excavation, we found parts from the tank armor. Casings and shells lay next to the tank armor. As it turned out, this was the site of the destruction of the American M3 Lee tank. 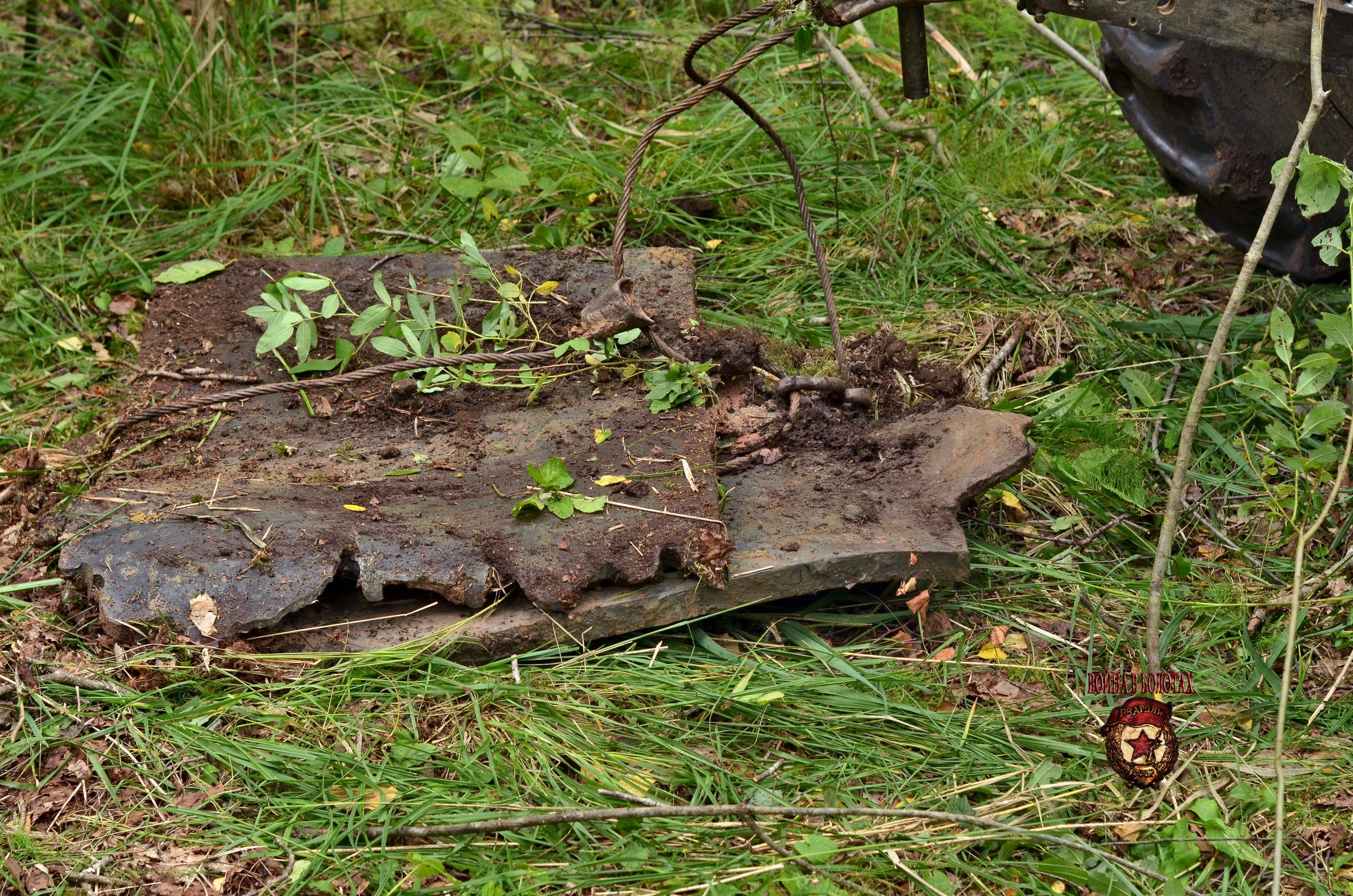 Armor of the American tank M3 Lee. Photo by @Swamp_war. 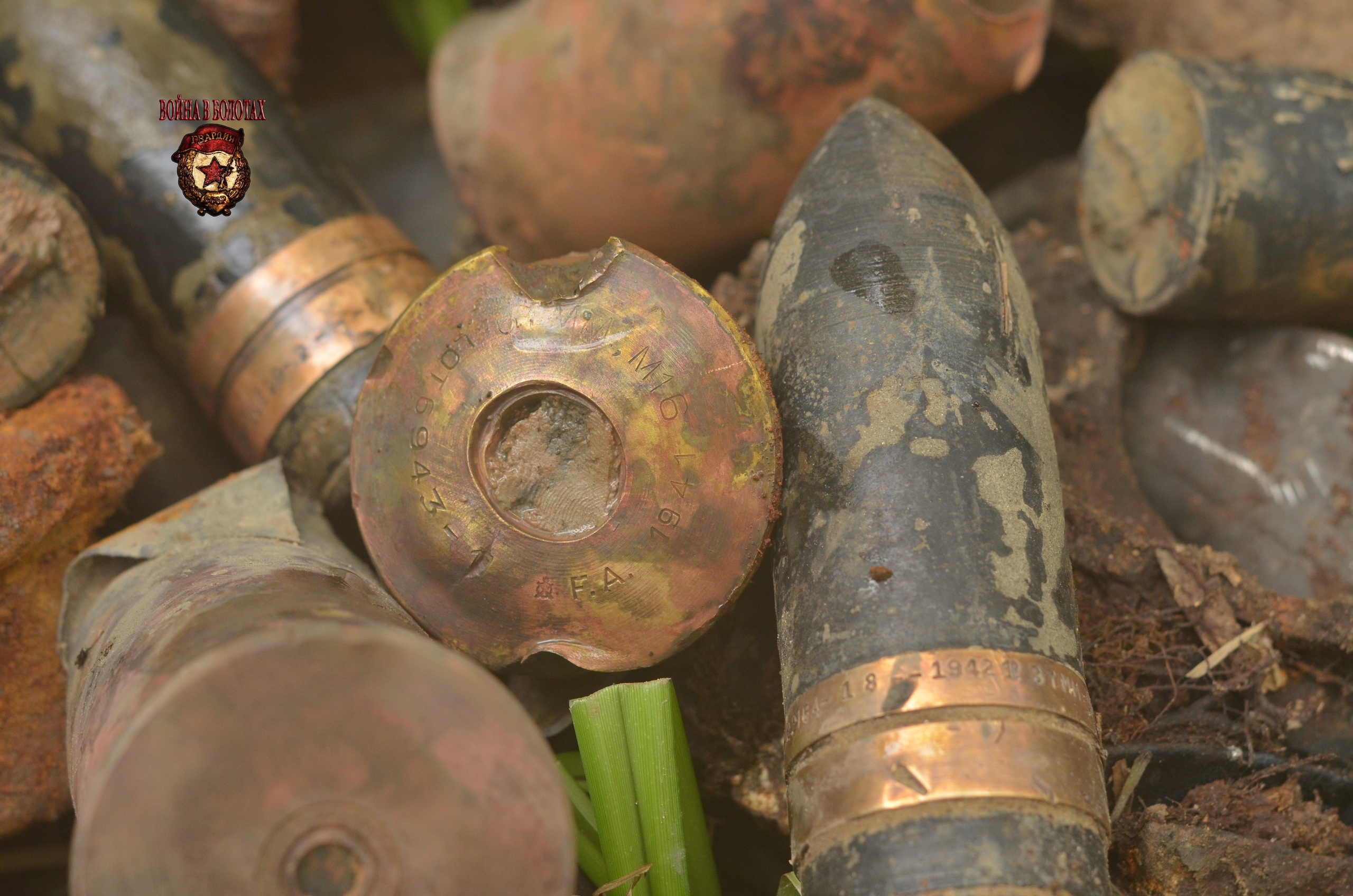 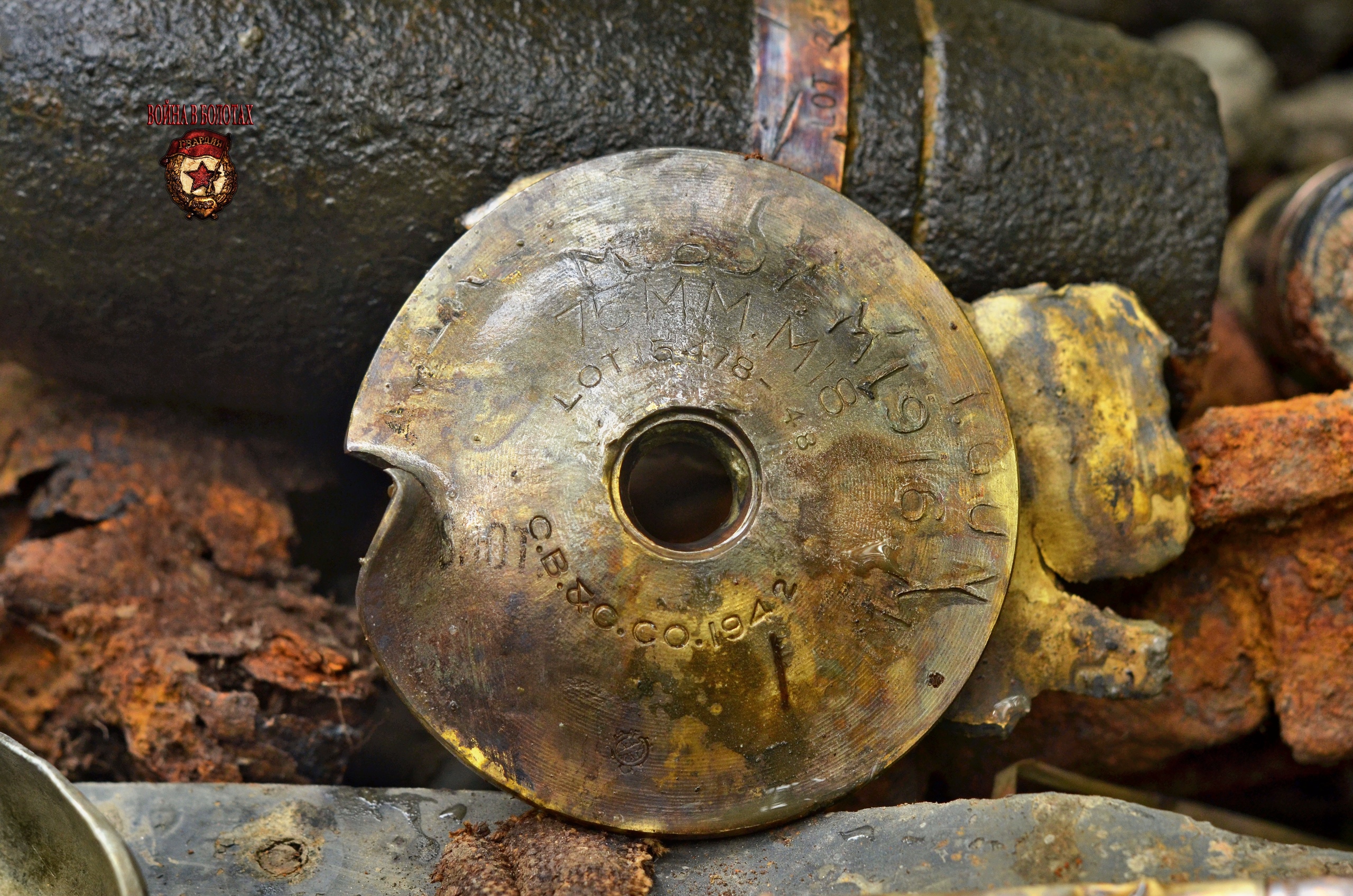 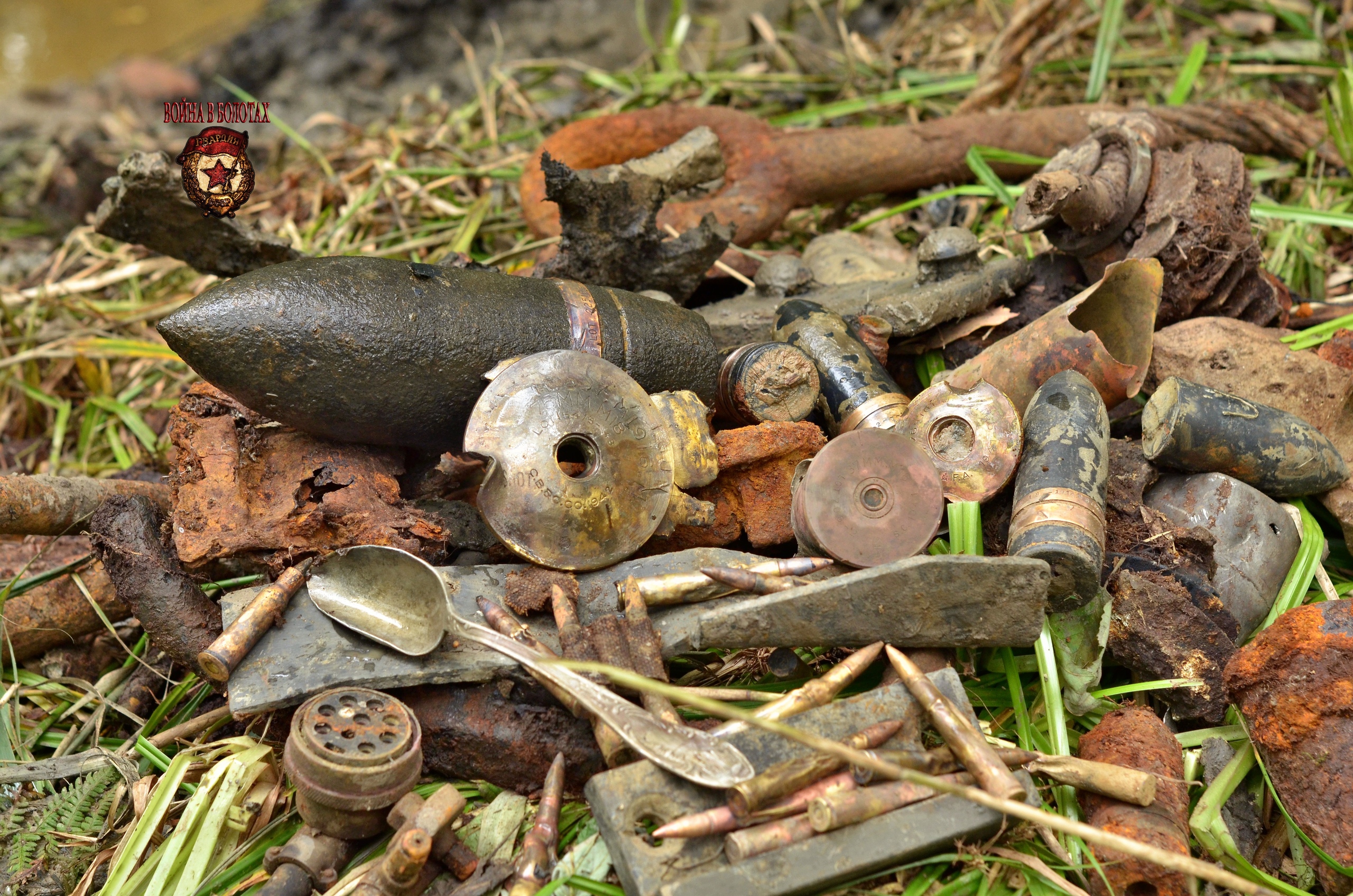 The rest of the findings of this day. Photo by @Swamp_war.

You can see a video of these excavations on the YouTube Channel “Swamp War“. The video is attached below. Thanks for your attention.