The end of October is a great time to excavate. There is almost no grass left in the forest. The insects are already in a dormant state. We again came to the forest to search for WWII relics in the Leningrad front.

The beginning of our work day

The sun sets quite early, so we had to leave very early in order to dig as long as possible in the sunlight. Arriving at the place first of all, we set up camp. I set up my tent and made a fire on which we will cook breakfast. My friend found a clearing with mushrooms near the camp. Now we have scrambled eggs and fried mushrooms for breakfast. Food cooked on fire is thousand times tastier than food cooked on the stove. Having a healthy supper, we took our metal detectors in a fighting mood and went in to search of relics. 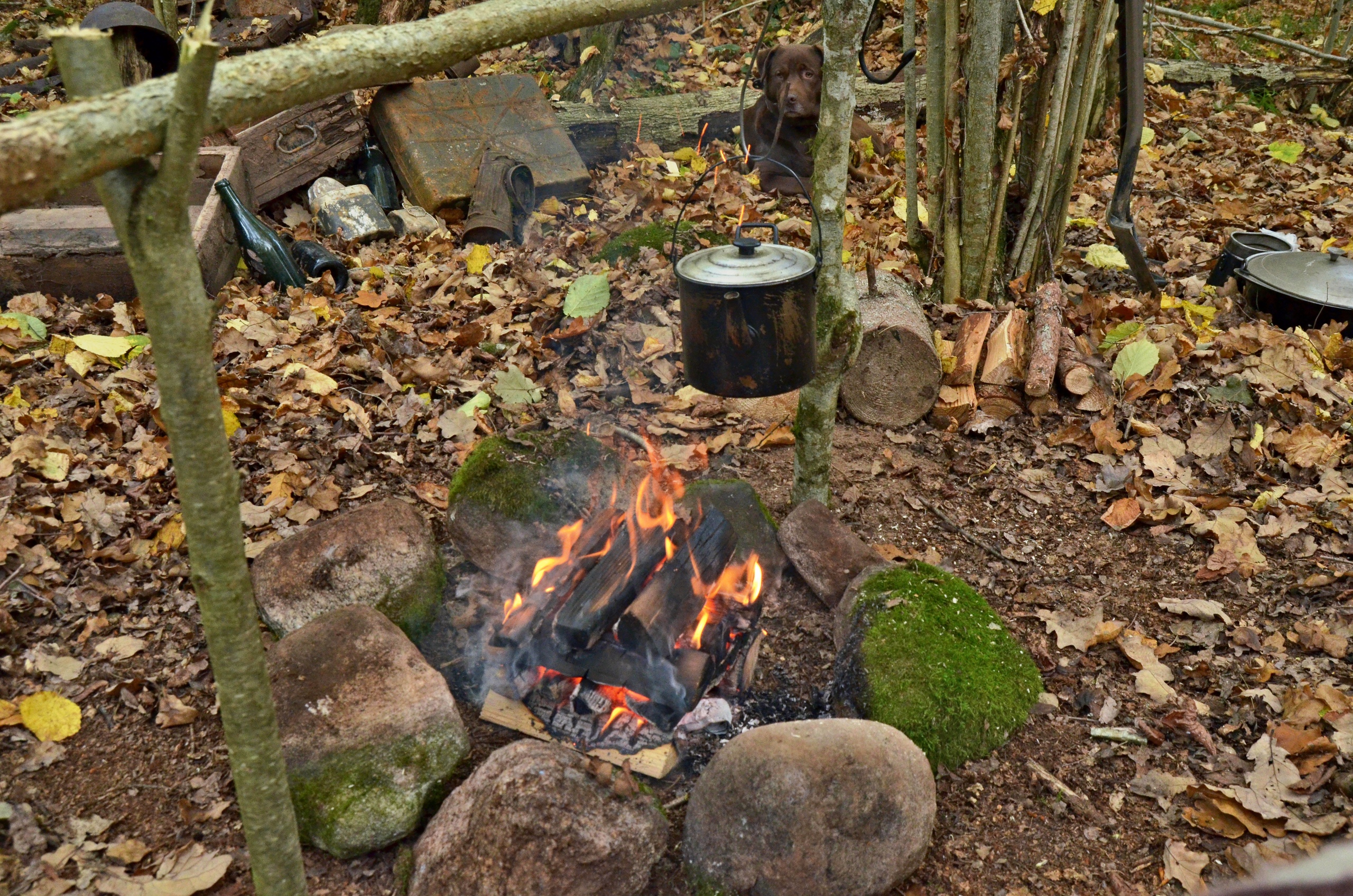 Resting in the forest always increases your appetite. Photo by @Swamp_war

Turning on my metal detector, I walked a few meters from the camp and found a strong signal. Based on my experience, I knew that there was something big. Having driven the shovel halfway into the ground, I ran into something solid. These turned out to be large brass artillery casings. Taking one case in my hand, I read the stamp on its bottom. These were Soviet 76 mm casings. For some reason, all of them were cut by almost half. Perhaps the soldier wanted to do some kind of craft. This is the so-called “trench creativity”. In total, there were 11 brass artillery casings in this pit.

Digging up some more small signals and found a very rusty Soviet helmet. This is a very common find on battlefields. After digging a few more signals, I again found a very strong signal. It was something big and round. Removing the soil layer I saw a familiar silhouette. It was a part from a Soviet 80mm mortar. We will take it to the local museum for restoration. 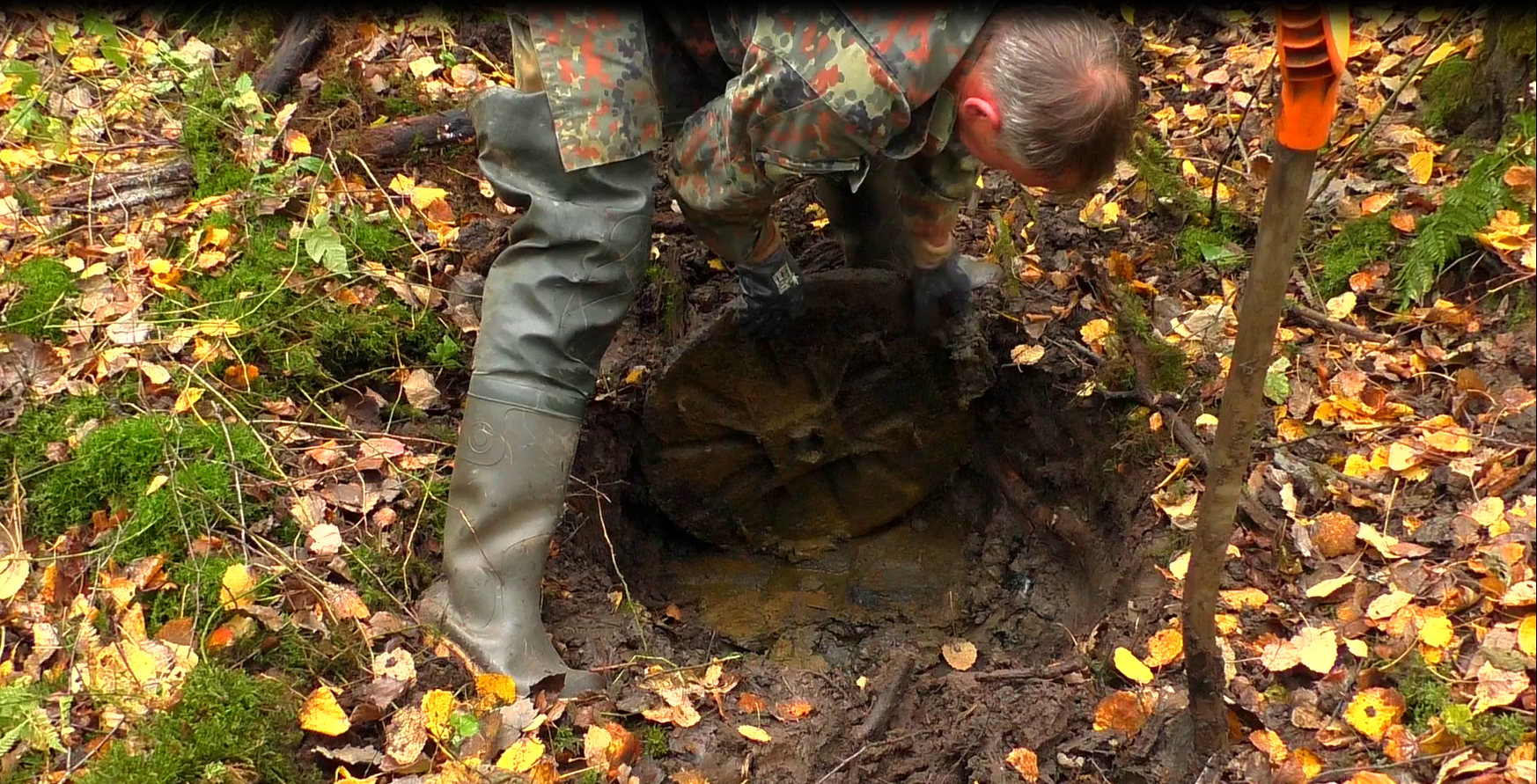 Part from a Soviet 80mm mortar. Photo by @Swamp_war 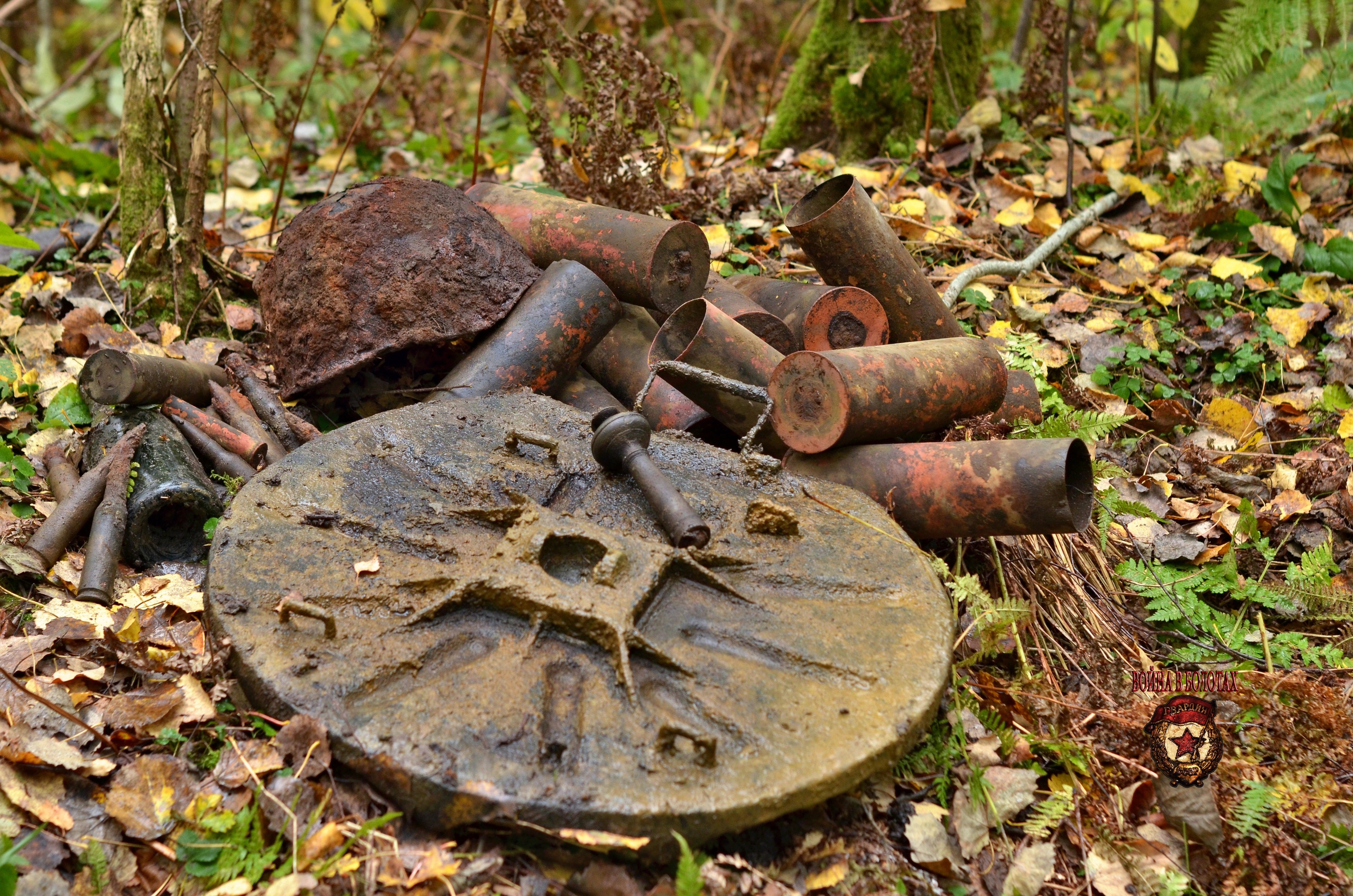 Here’s what I managed to find near our camp within a short period of time. Photo by @Swamp_war

Among the trees I saw a large pit filled to the brim with water. It was a dugout in German positions. Previously, it had not been excavated by other detectorists. I took the pump and started pumping out the water. The water had to be pumped out regularly, since the pit was constantly filled with groundwater. 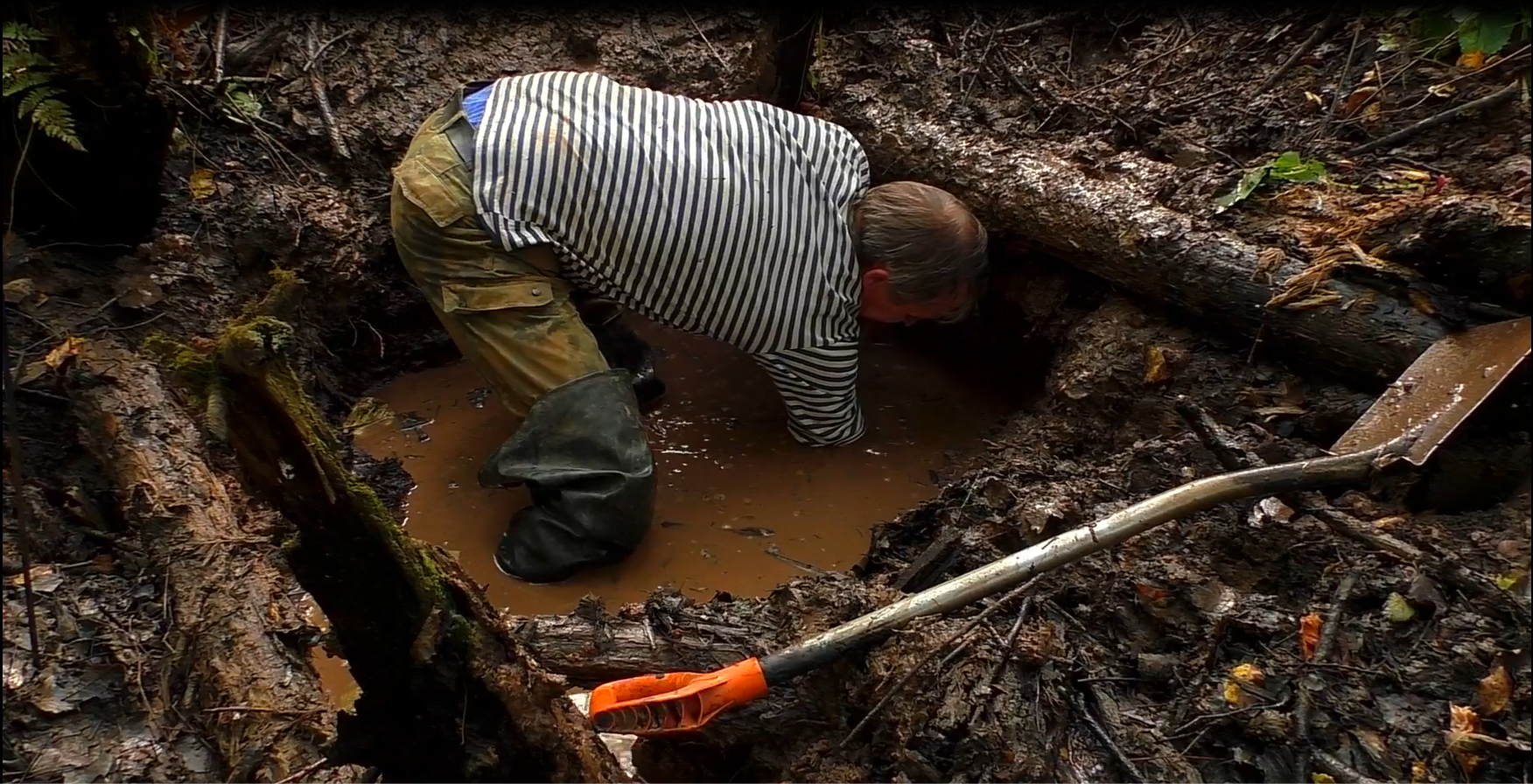 The whole pit was filled with pine logs, with which the Germans laid out the walls and roof of the dugout. Photo by @Swamp_war

At the bottom of the dugout, I found a large number of wooden and iron military crates. Many of them were in good condition and even covered in paint. All these boxes will become museum pieces. In addition to the boxes, there were various war items in the dugout, which I often found in other dugouts. I did not find anything particularly interesting. 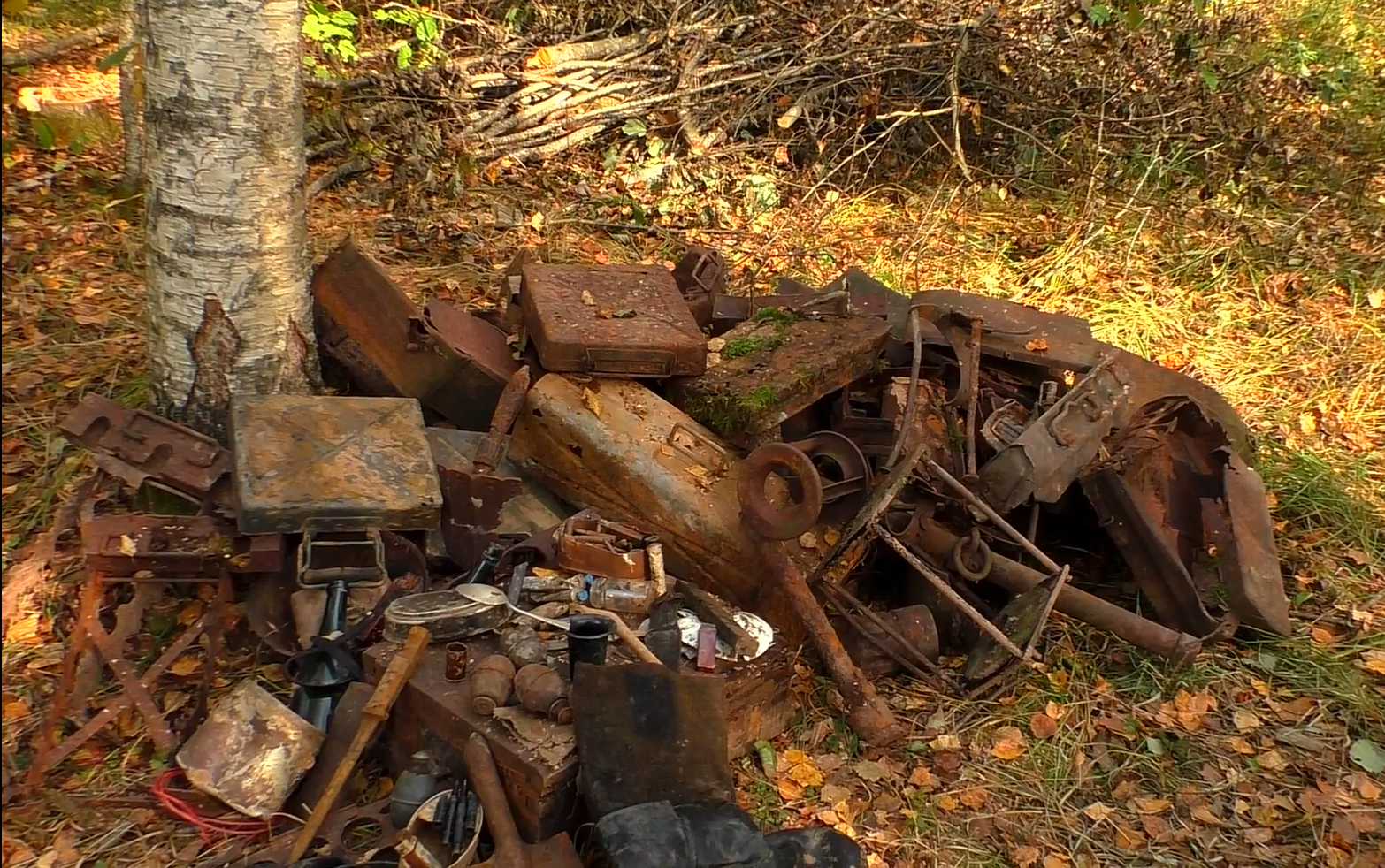 All this heap are finds from a German dugout. Some items will be restored and become museum pieces, and some will become props for the reconstruction of the battles of the Second World War. Photo by @Swamp_war

Interesting relics found by my comrade

My friend also dug a German dugout. Under the boards that were once the floor of the dugout, he found two beautiful German handles. One was a fountain pen and the other was a ballpoint pen. Both pens were in excellent condition and if properly refurbished they will write again. 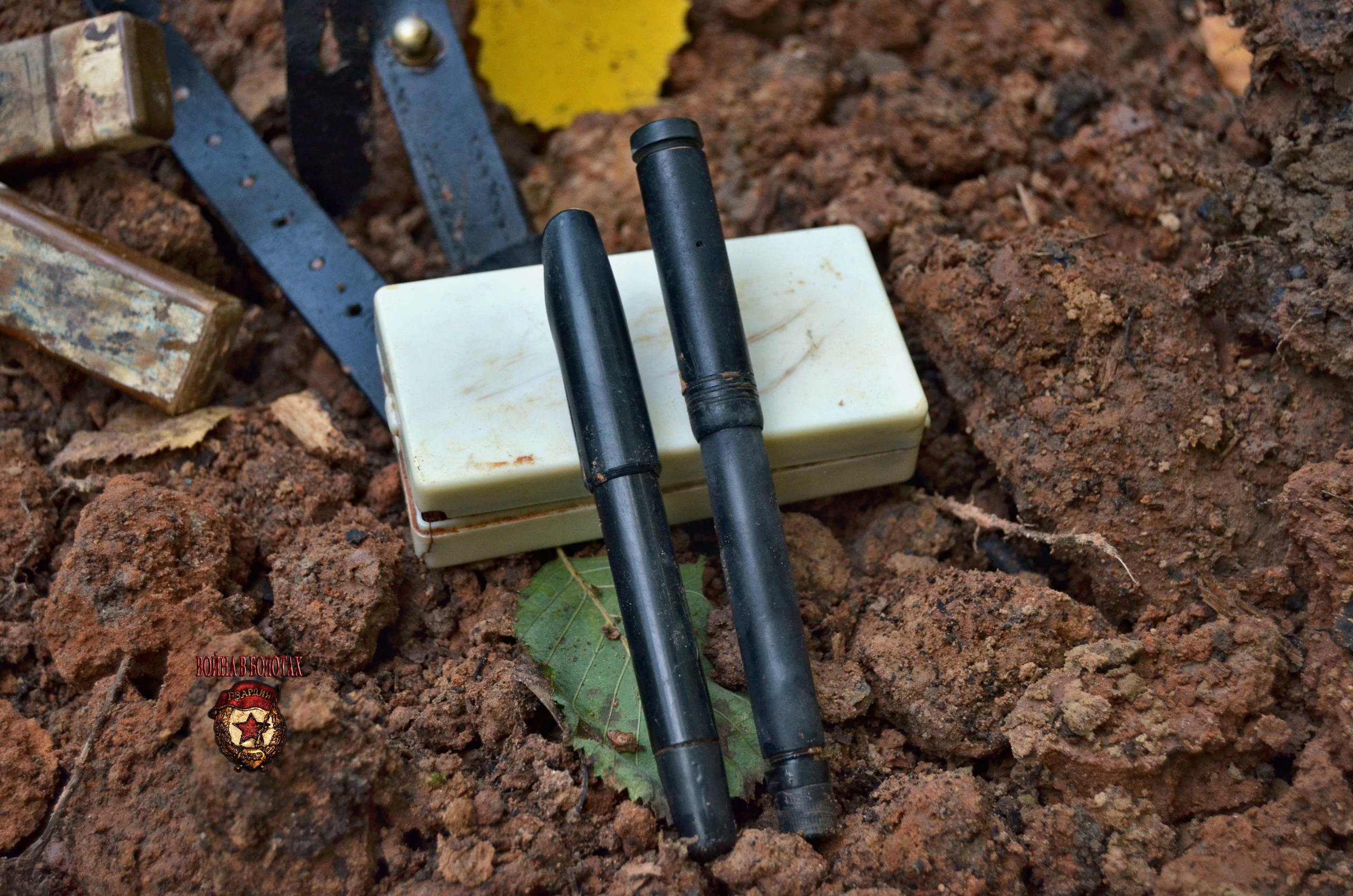 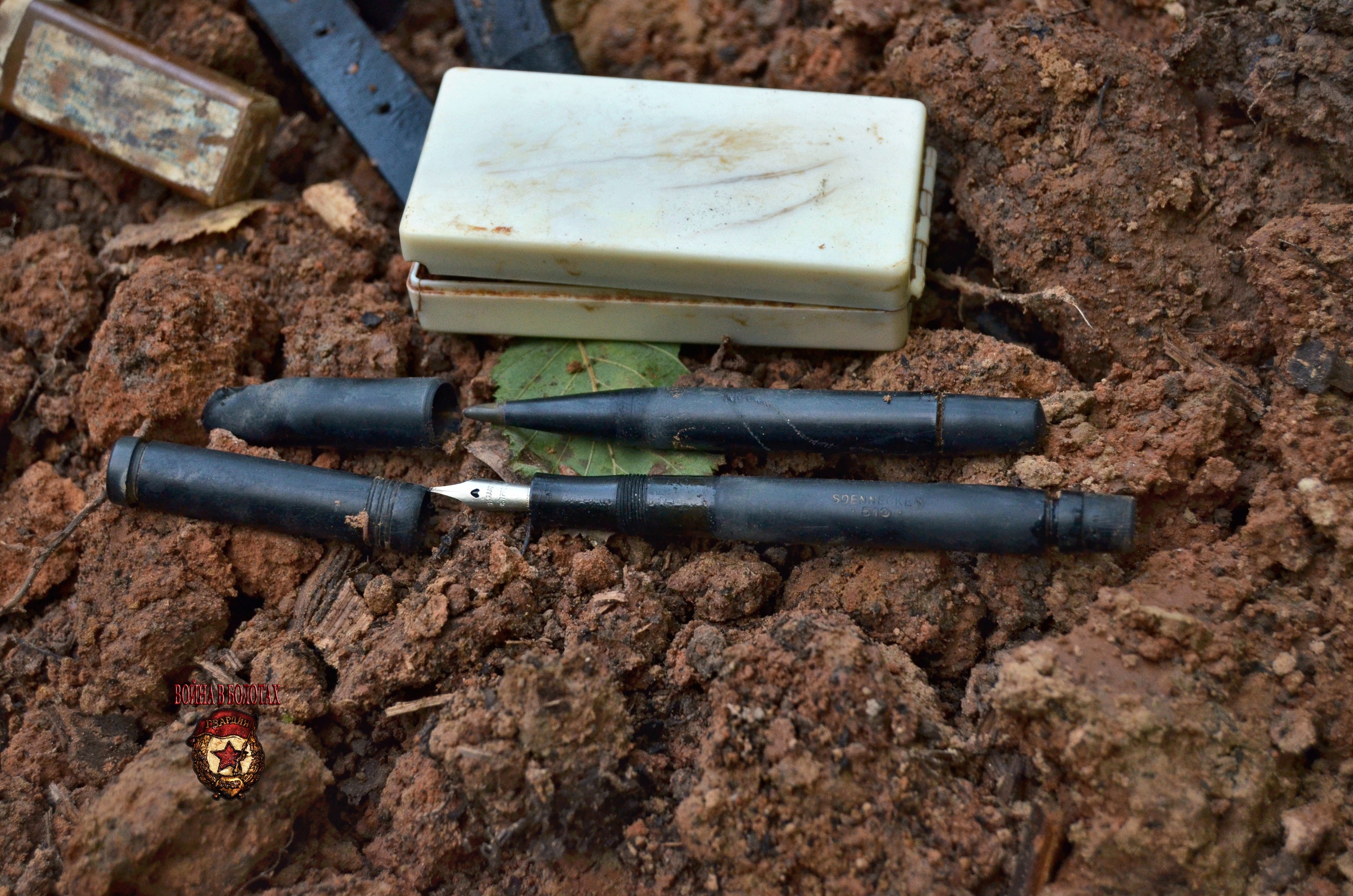 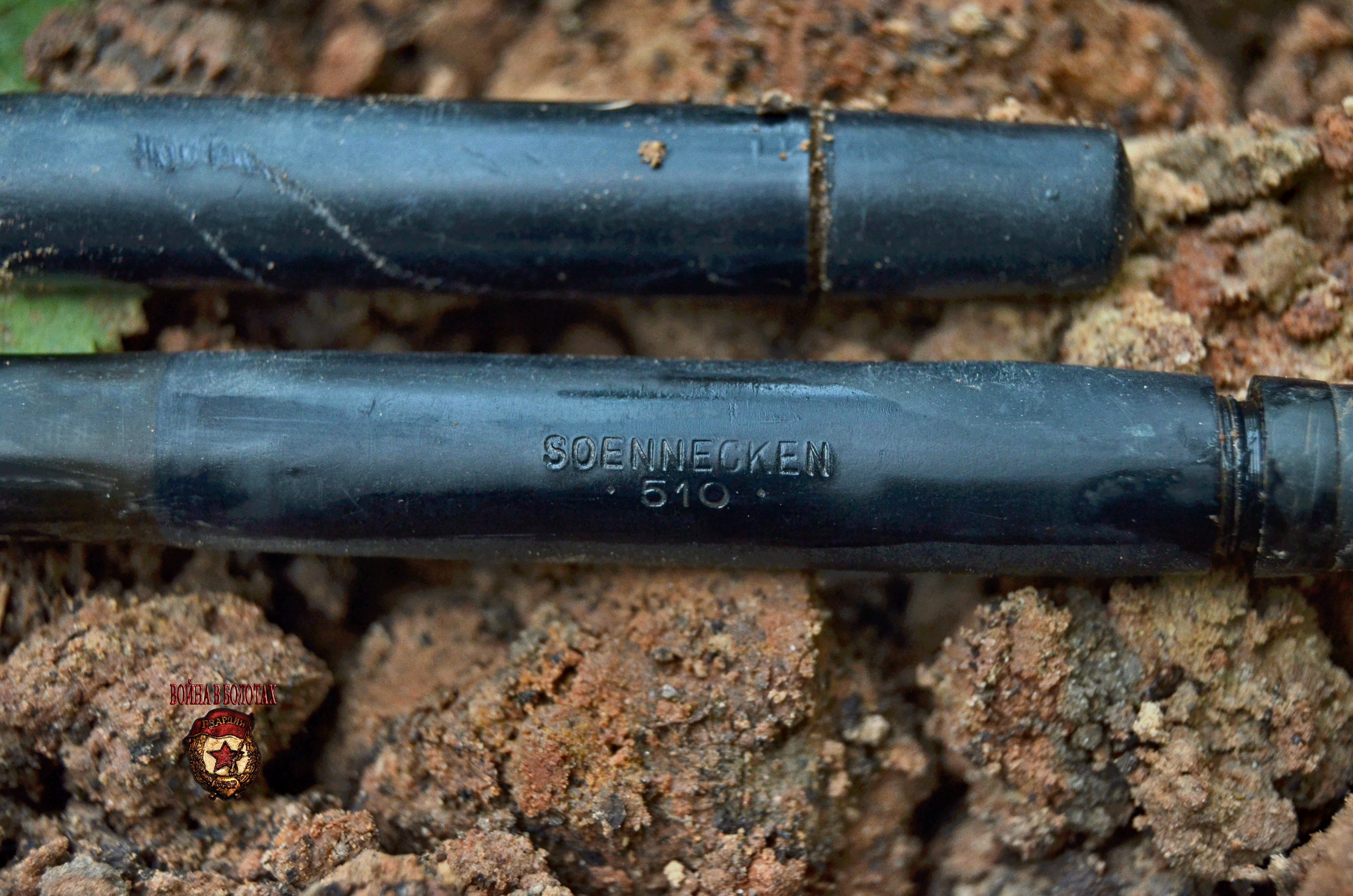 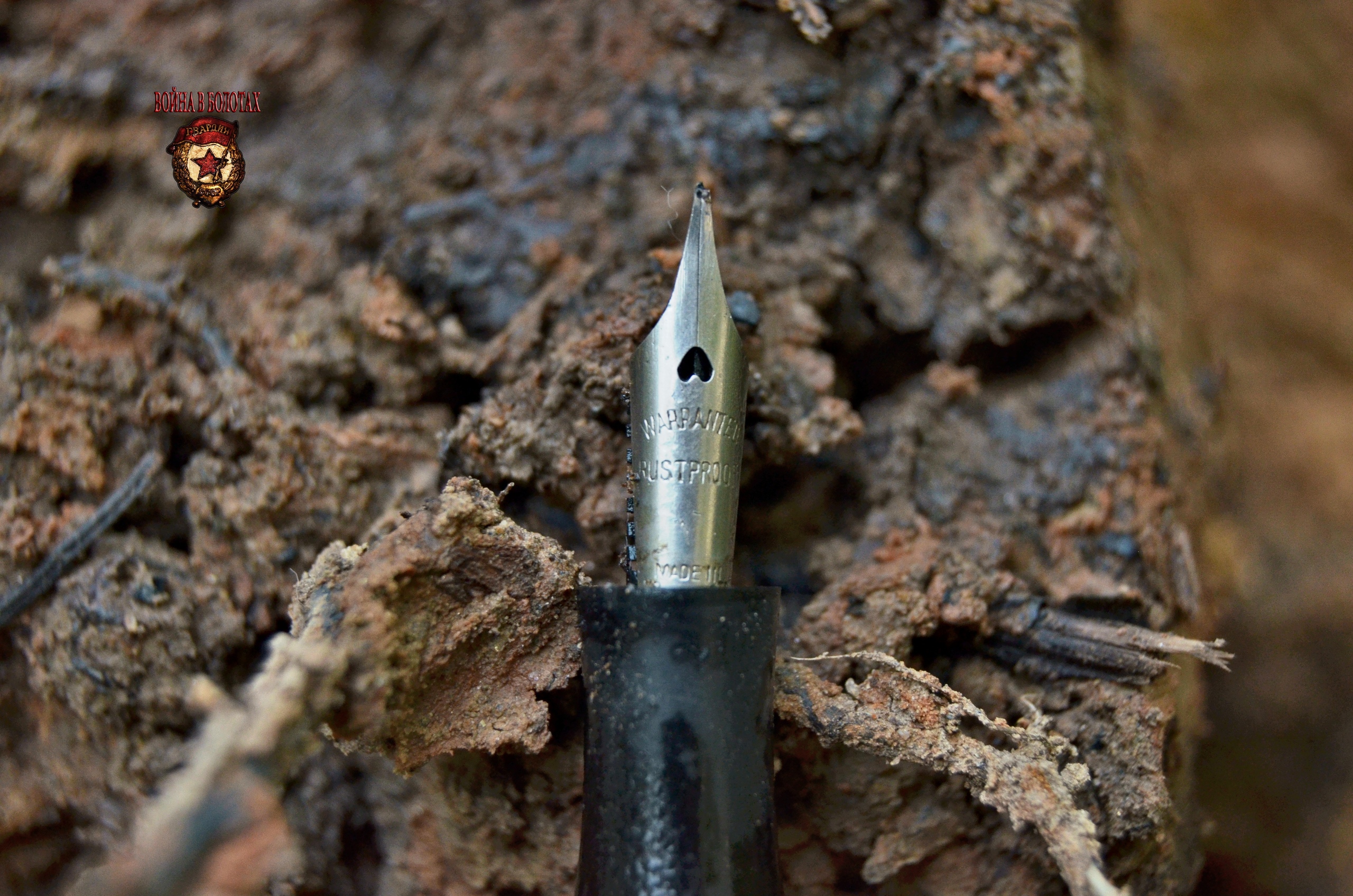 Another pleasant find of my friend was a Wehrmacht soldier’s spoon, made of stainless steel. It is perfectly preserved under a layer of clay. On the handle of the spoon was a stigma – an eagle holding a swastika in its paws. 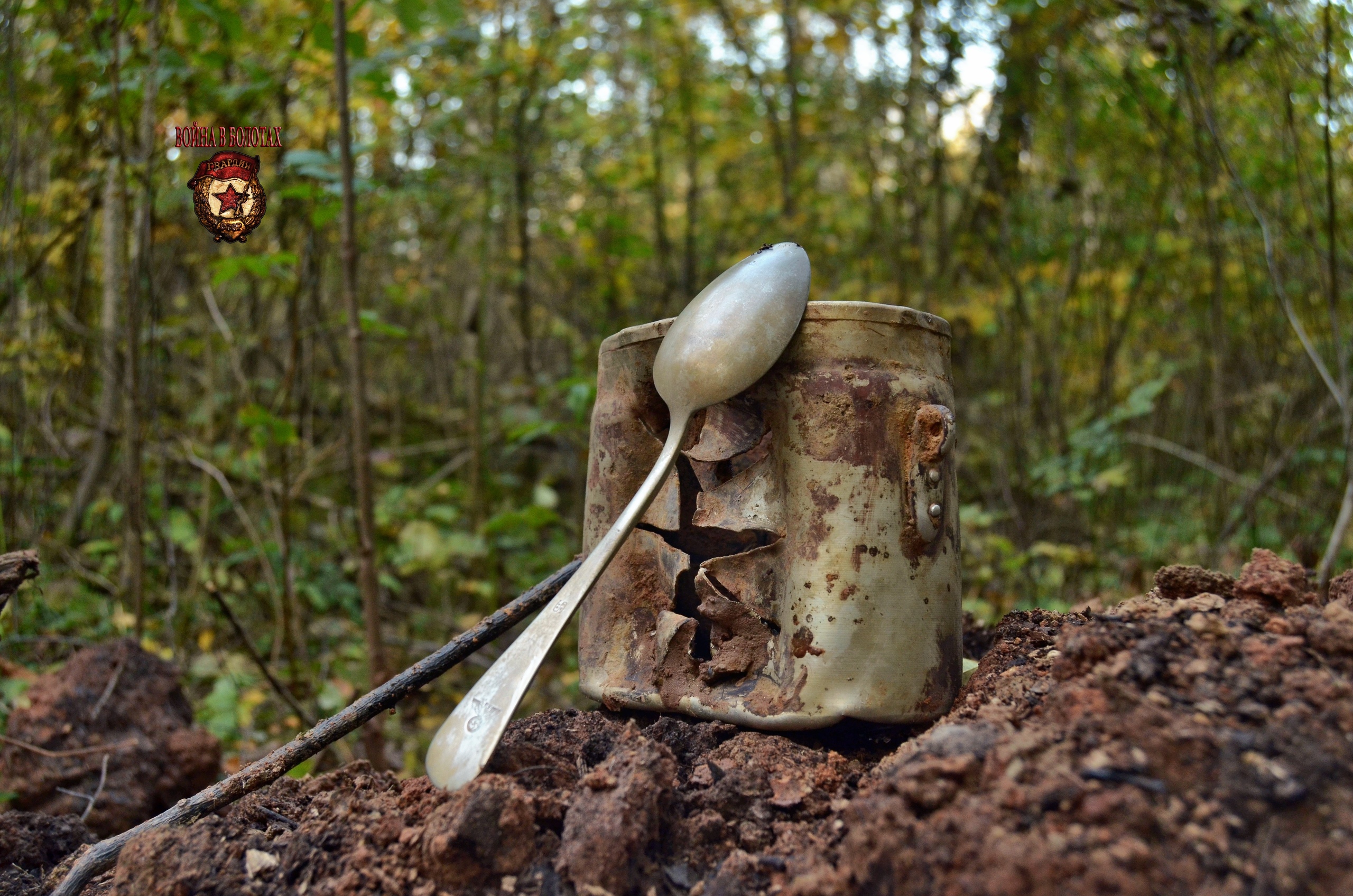 Together with a spoon in the dugout lays a German aluminum pot, from which the soldier made a mini-cooker. Photo by @Swamp_war 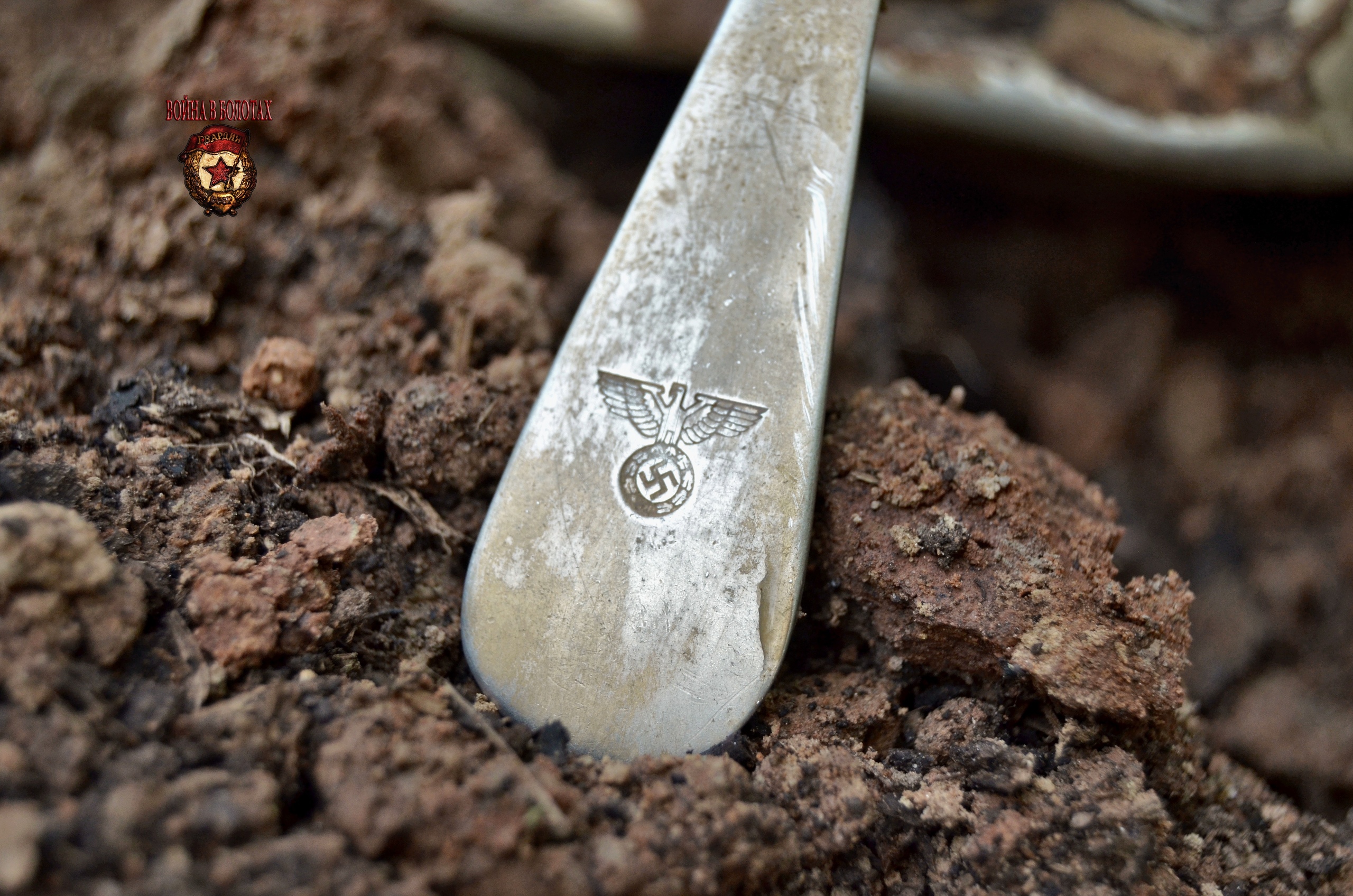 With this our day of searching for relics ended. Thank you all for your attention. I hope you were interested in reading my article. I will attach a video of these excavations with English subtitles to the article. Good luck! 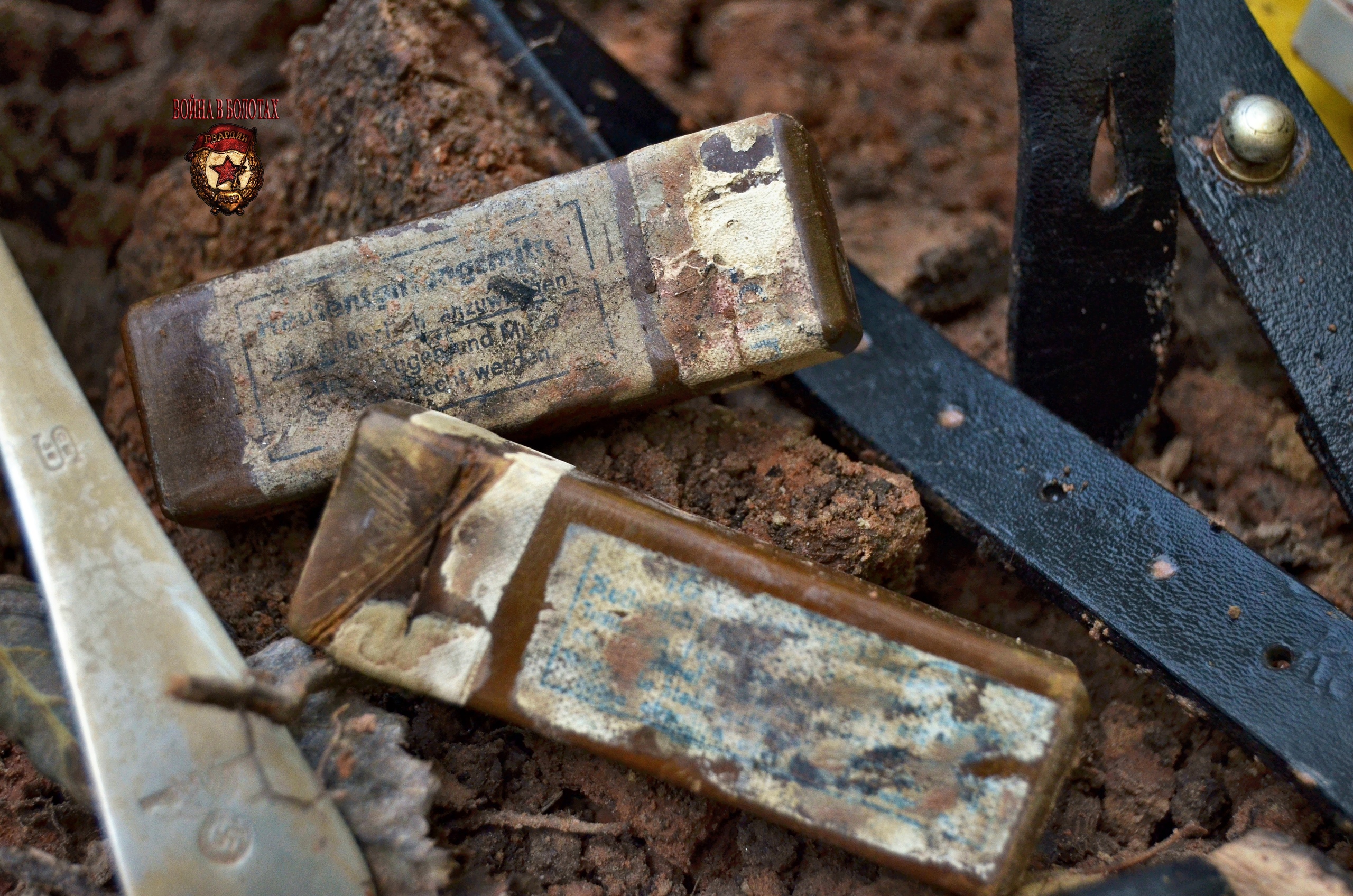 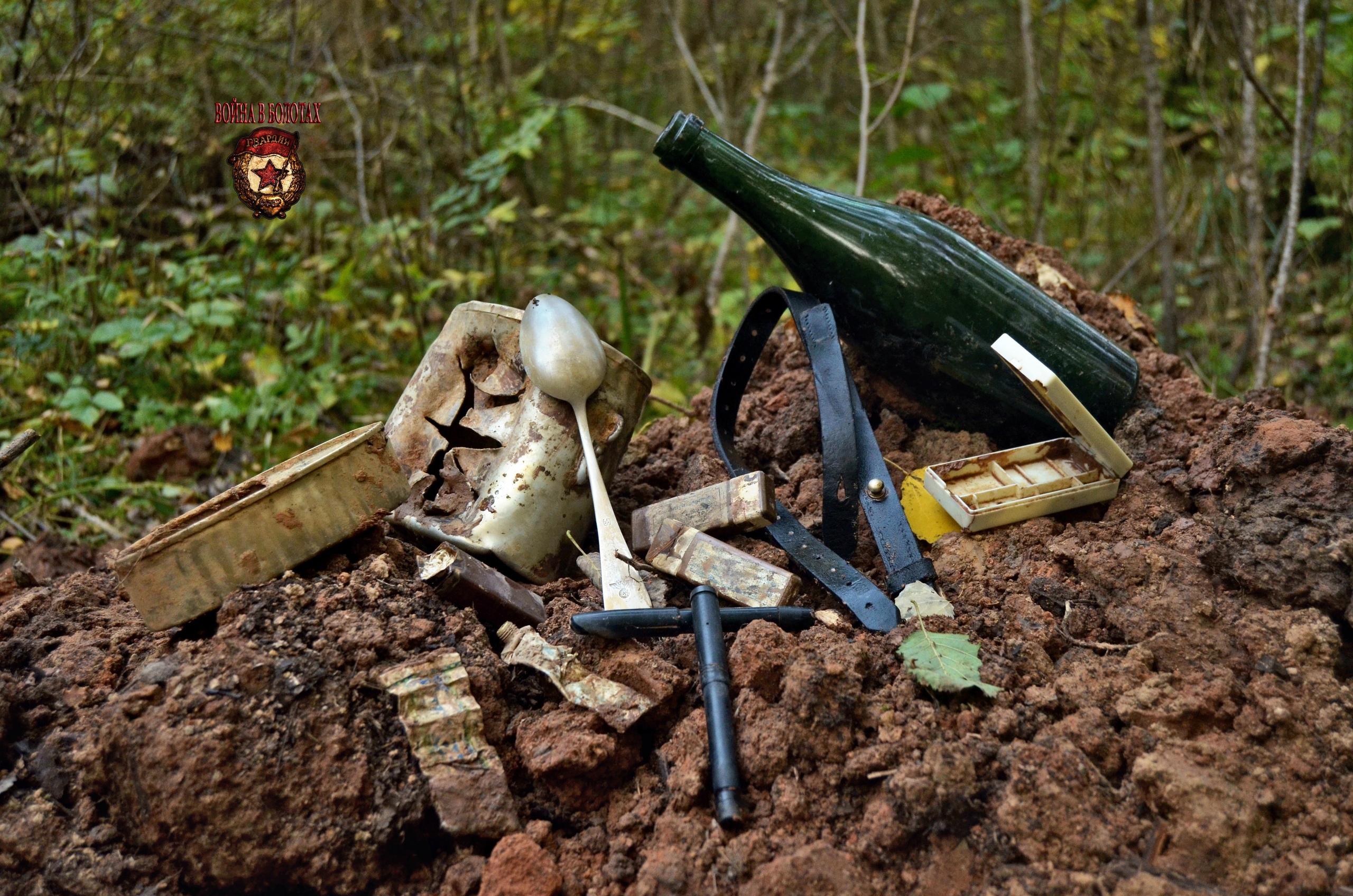