In this article we will talk about the most massive and at the same time the rarest helmet of Nazi Germany, one of the most recognizable relics of WW2 – the helmet M42 / Stahlhelm M42.

The 1942 steel helmet (Stahlhelm Modell M42) is an infantry helmet approved as the standard combined arms helmet of the Third Reich armed forces in the summer of 1942. In this article you will find all the information about this helmet.

The first modification which was intended to speed production up would take place in 26 March 1940. The air vents on both sides of the helmet would be embossed into the steel instead of being a separate piece peened into place. The steel would change as well to heavier manganese-silicon steel. The prior to used Molybdenum steel would no longer be used as 90% of the worlds molybdenite needed to manufacture the steel was in the USA. and South America and was becoming unavailable for German purchase.

While the embossed air vents would allow for faster helmet production it would not suffice for long. With the Invasion of the Soviet Union in June of 1941, not to mention campaigns in North Africa and the Balkans more helmets were going to be needed quickly. The final modification was ordered by the German high command on 6 June 1942.  As an economic measure the helmet’s rolled edge would be discontinued in favor of a raw edge. The method of manufacture would change as well. The original method of slow press forming in combination with over-heated tempering which had to be done in multiply steps was changed to a rapid hot-stamping method which could produced the helmet in four short steps.

On April 20, 1942, preparations began for the release of the latest military modification of a steel helmet. They tried to reduce the cost and simplify the production as much as possible, for which they changed the rim of the helmet in comparison with the M35 and M40 models – this was to reduce manufacturing time and reduce the number of production operations. This helmet received the designation “Steel helmet model 1942”, M1942 or M42. 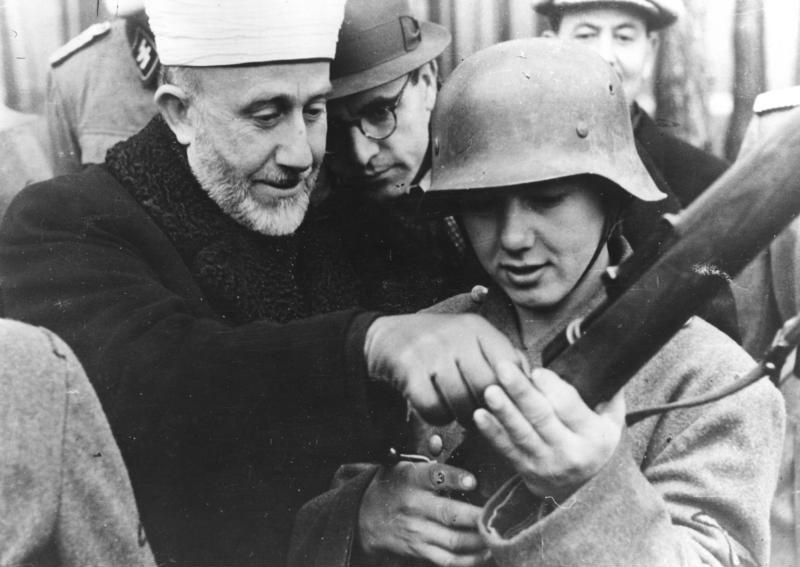 German teenager in a helmet M42. Photos from Wikipedia

The first M42 helmets were produced on August 1, 1942. From the previous M40, the new M42 externally differed only in flanges, which no longer rolled inside the helmet, but after stamping remained practically unprocessed, bent out (flanged). Another difference, invisible to the eye, was much more important: the composition of steel has changed, now it has ceased to be alloyed.

The M42 helmet was a simplified version of the M40. A distinctive feature of this helmet is that the edge of the base of the helmet was not rolled, but remained sharp. This feature was dictated by the need to simplify and reduce the cost of the helmet manufacturing process. In addition, decals ceased to be applied to M42 helmets, although decals of the Wehrmacht, Luftwaffe, Kriegsmarin, SS and police were sometimes applied on early helmets.

German helmets are one of the most recognizable relics of WW2.

How to distinguish an M40 helmet from an M42 helmet?

The main difference between the helmet M42 and the helmet M40 is not only the quality of the metal (in the production of steel helmets M42 used milder steel) and the edges of the helmet. The M42 helmet was produced by stamping and its edges after production did not bend inside the helmet, but remained from the outside not bent and almost untreated. In the photo below you can see these differences.

The main differences between the helmets M42 (left) and M40 (right). Photo from antik.saarland and ebay.com

One of the most popular helmets

The helmet of the 1942 model (M42) is the most common of all German army helmets used during the Second World War. This is primarily due to the fact that the release of M42 was carried out from 1942 to 1945, while most of the helmets of the early models were lost during the fighting. For this reason, currently, of the entire “model range” of German helmets during the Second World War, the M42 model is the most common. 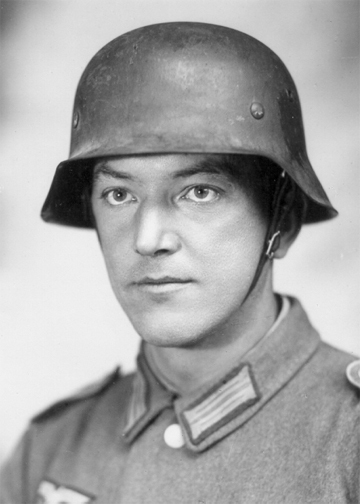 The M42 helmet was mass-produced until the end of 1944 – the beginning of 1945, when most of the factories that manufactured helmets and components for them were captured by the Allies or stopped due to lack of materials for further production. Released M42 were used in the army along with M35 and M40 until the very end of the war, gradually replacing them.

How decals were applied to the German helmet M42?

Decals of German steel helmets had a multilayer structure, and one of the layers was aluminum. This gave the decal a metallic silver color. This is especially noticeable on the Waffen SS emblems that used the silver box.

In addition, decals ceased to be applied to M42 helmets, although decals of the Wehrmacht, Luftwaffe, Kriegsmarin, SS and police were sometimes applied on early helmets. 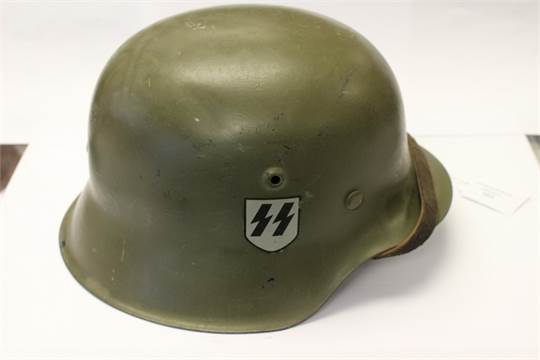 Decal SS on a M42 helmet. Photo from www.the-saleroom.com 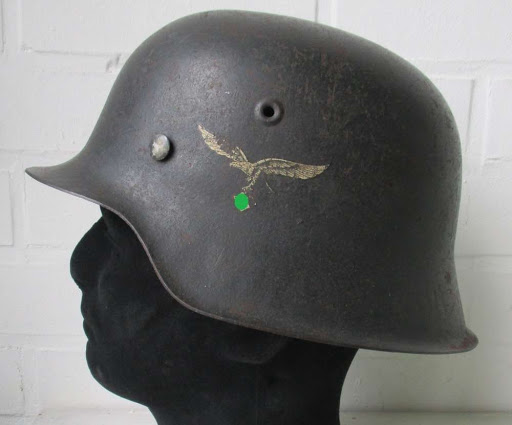 Decal luftwaffe on a M42 helmet. Photo from www.nachschublager.de/ 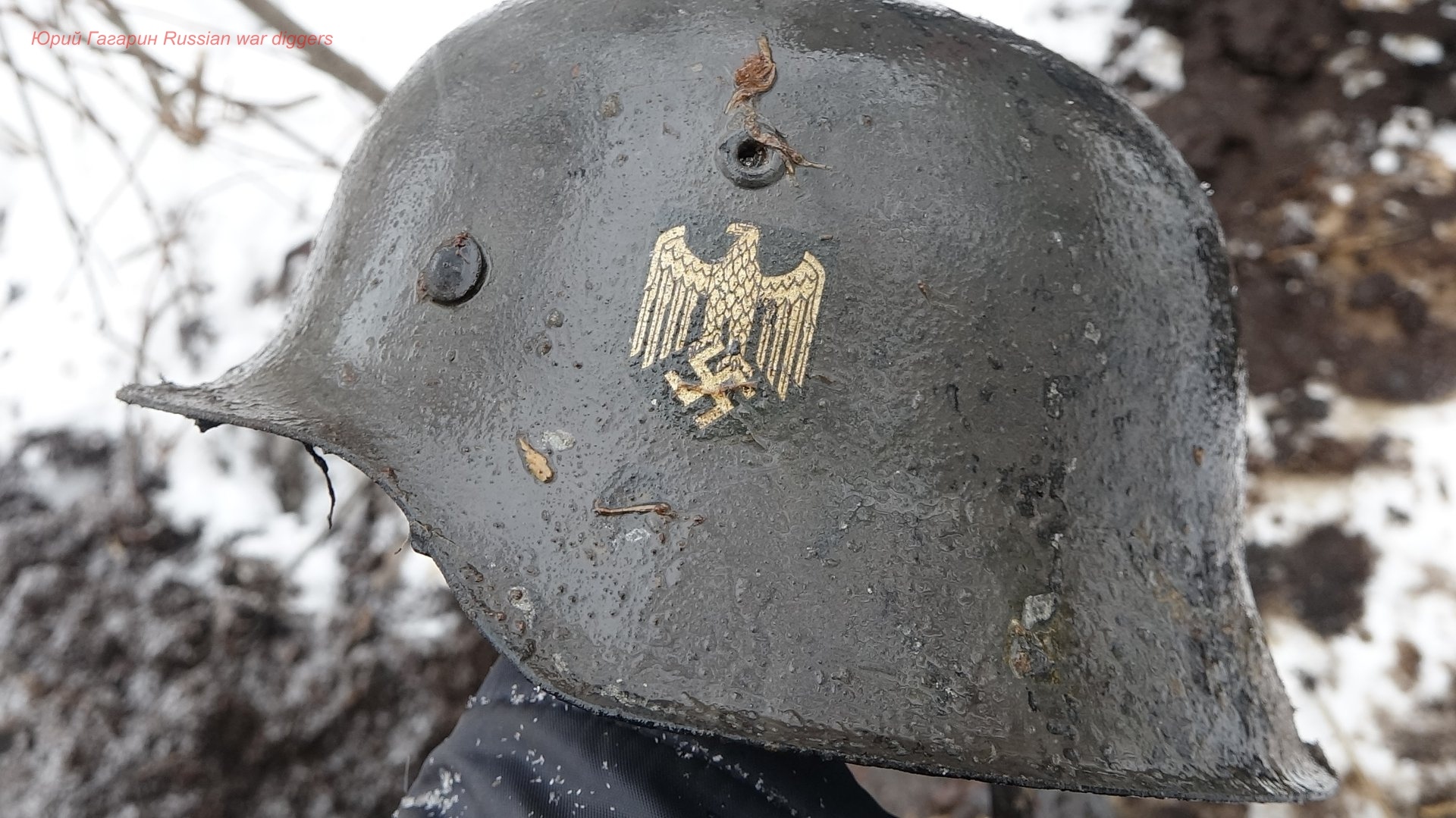 Decal wehrmacht on a M42 helmet. Photo from Yuri Gagarin

The helmet was painted, like previous models, with standard factory paint of gray-green color. Often, already in combat conditions, the helmet was repainted or camouflage was applied to it.

By the time the M42 helmet was in full production the German military was experiencing set backs across every front. The need for helmets continued to expand however, therefore manufactured helmets which might not have been considered acceptable in prior years were sent to the front. Due to this fact M42 helmet were frequently made from poorer quality steel than their predecessors. M35 and M40 helmets almost always exhibit smooth steel free blemishes. M42s however are often encountered with rough seemingly unfinished steel. These blemishes are caused by impurities in the steel, in years past these impurities were removed during the refining process. This was both an added cost and aside it slowed the manufacture process down. Thus the extra steps necessary to produce finer steel for helmets was abandoned.

This maybe due to the use of slave labor by both of these factories. Surviving records show Vereinigte Deutsche Nickelwerke AG, Schwerte utilized both French POWs as well as Russian women forcible removed from the occupied parts of the Soviet Union as slave labor. Emaillerwerke AG, Fulda used both Russian men and women drawn from a near by slave labor camp. Not surprising most of these men and women had poor training, few had any background in metal work, and naturally had little true motivation to produce a quality product. 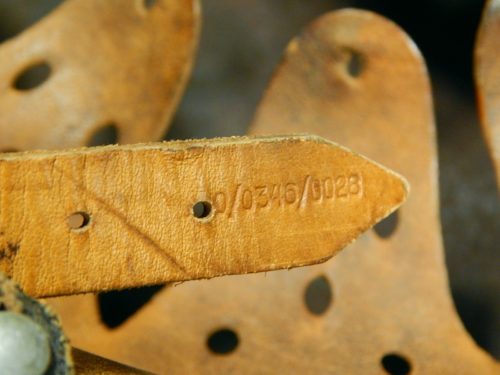 M42 helmets utilized the same liner and chinstrap system as the M40. The liner consisted of two interlocking zinc alloy bands held into the helmet with three split pins. While liners from the early part of the war typically used steer hide, or sheep skin, later in the war these higher quality leather were exchanged for much cheaper pig skin.

Although the helmet’s chinstrap remained almost unchanged from 1935 on, by the time the M42 came into production the markings on the strap did. Prior to 1943 chinstrap were marked with a manufacture name and year of production. Starting in 1943 the manufacture was substituted for a code known as a Reichsbetriebsnummer or RB number. These numbers were used on all sorts of German equipment, uniforms and field gear not just chinstraps. The code was tied to a specific manufacture for quality control proposes. The use of the code was done to confuse allied intelligence from knowing the location of military equipment manufactures.