The end of the summer. It started raining, but it didn’t stop us. We were again moving to the positions of the Wehrmacht army to search for the dead soldiers of the Second World War. Many people consider us to be black archaeologists. But this is not the case. The bulk of all the relics are in the local museum of the World War II. All the remains of the soldiers are reburied with all military honors.

Arriving at the planned place, I set up a camp. It usually takes a couple of hours to set up a camp. After breakfast I took my metal detector and went in search. The first interesting find was found literally in the first 10 minutes of the search. It turned out to be a small bakelite box. It was closed, but there was something in it. After cleaning the box from dirt, I opened it and I was pleasantly surprised. It was a German razor in perfect condition. 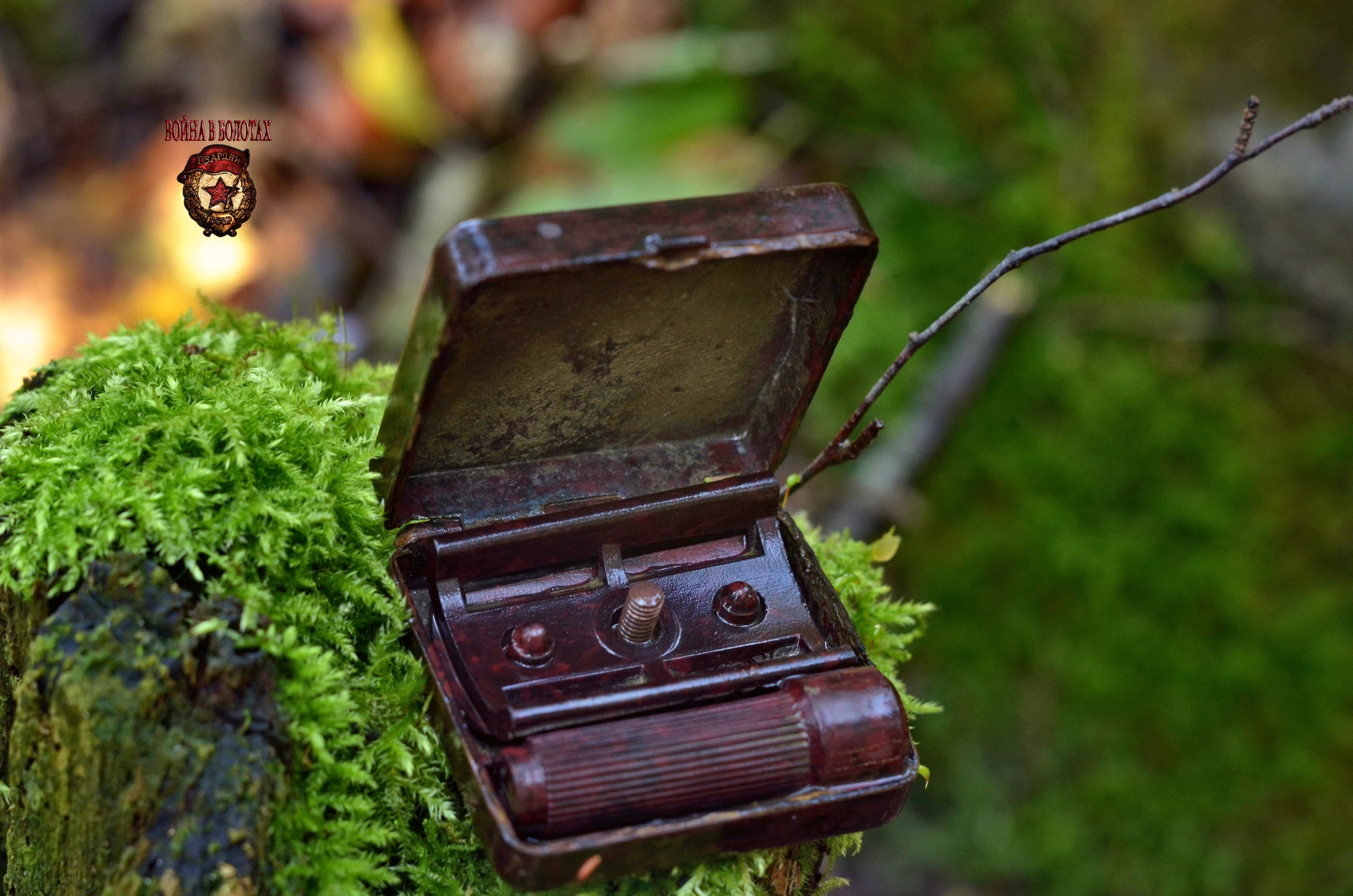 German razor. After lying in the ground for over 70 years, it has been perfectly preserved. Photo by @swamp_war 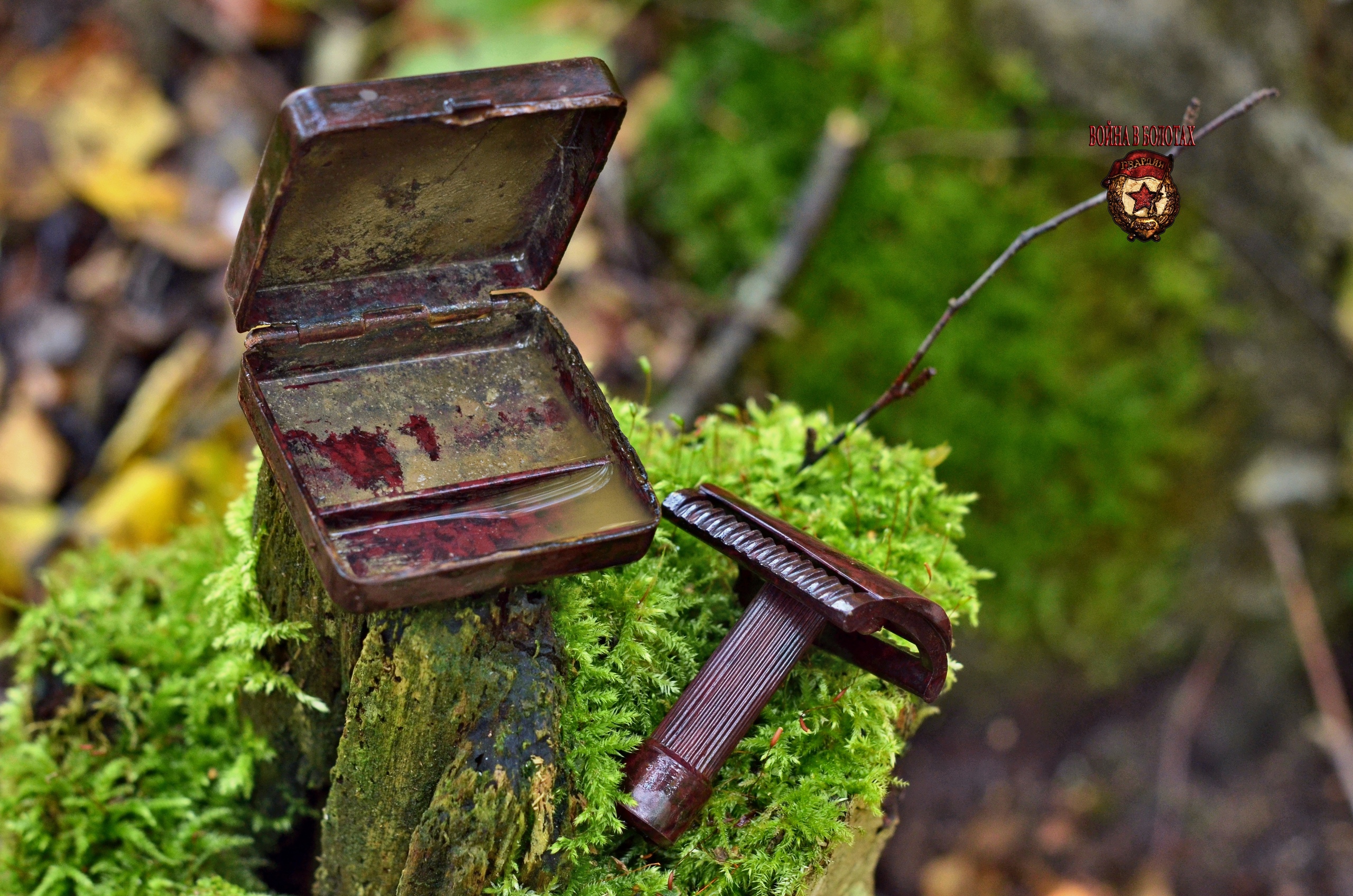 German razor from the Leningrad front. Photo by @swamp_war 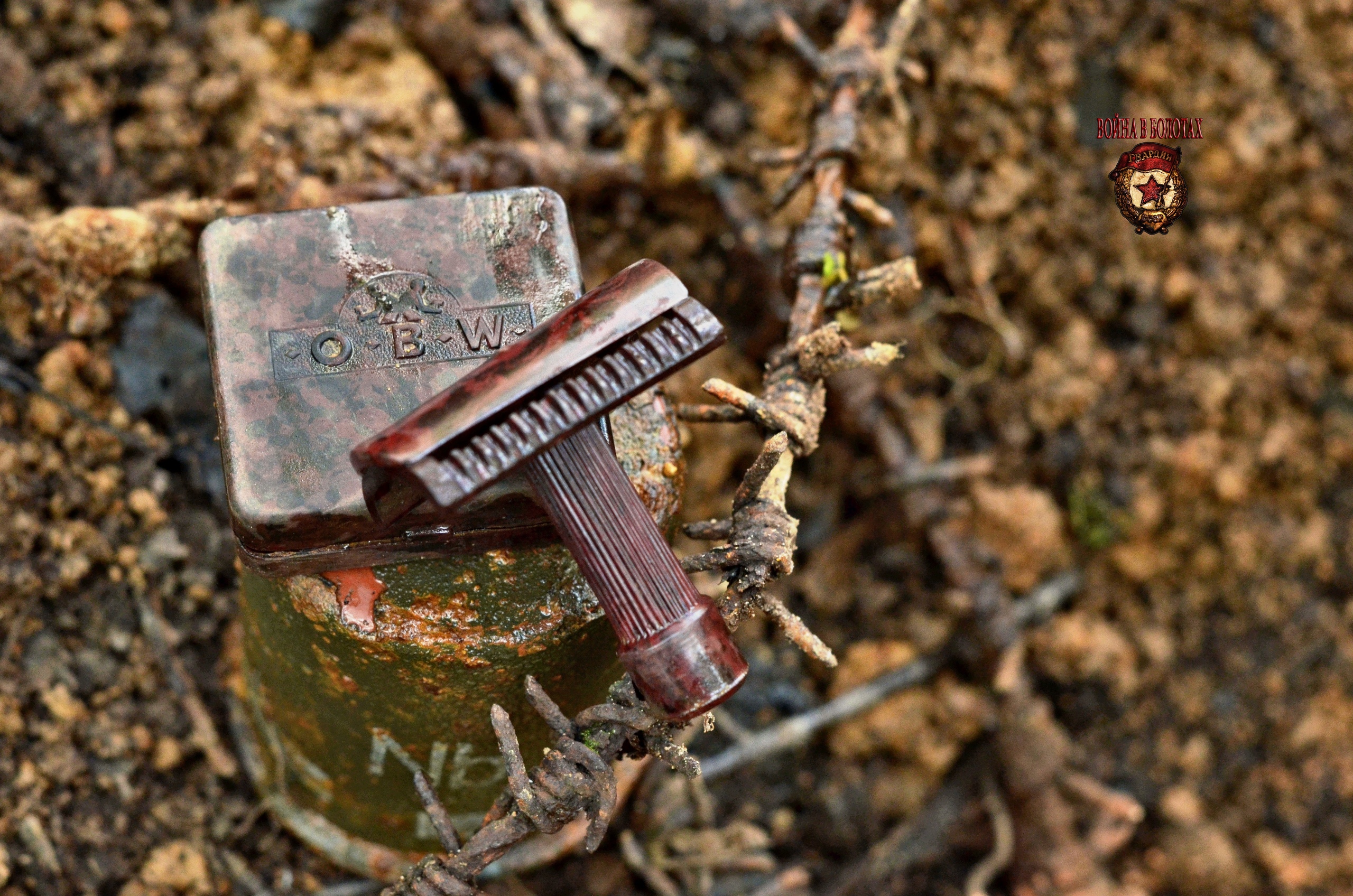 The shaver was washed with plain water. Photo by @swamp_war 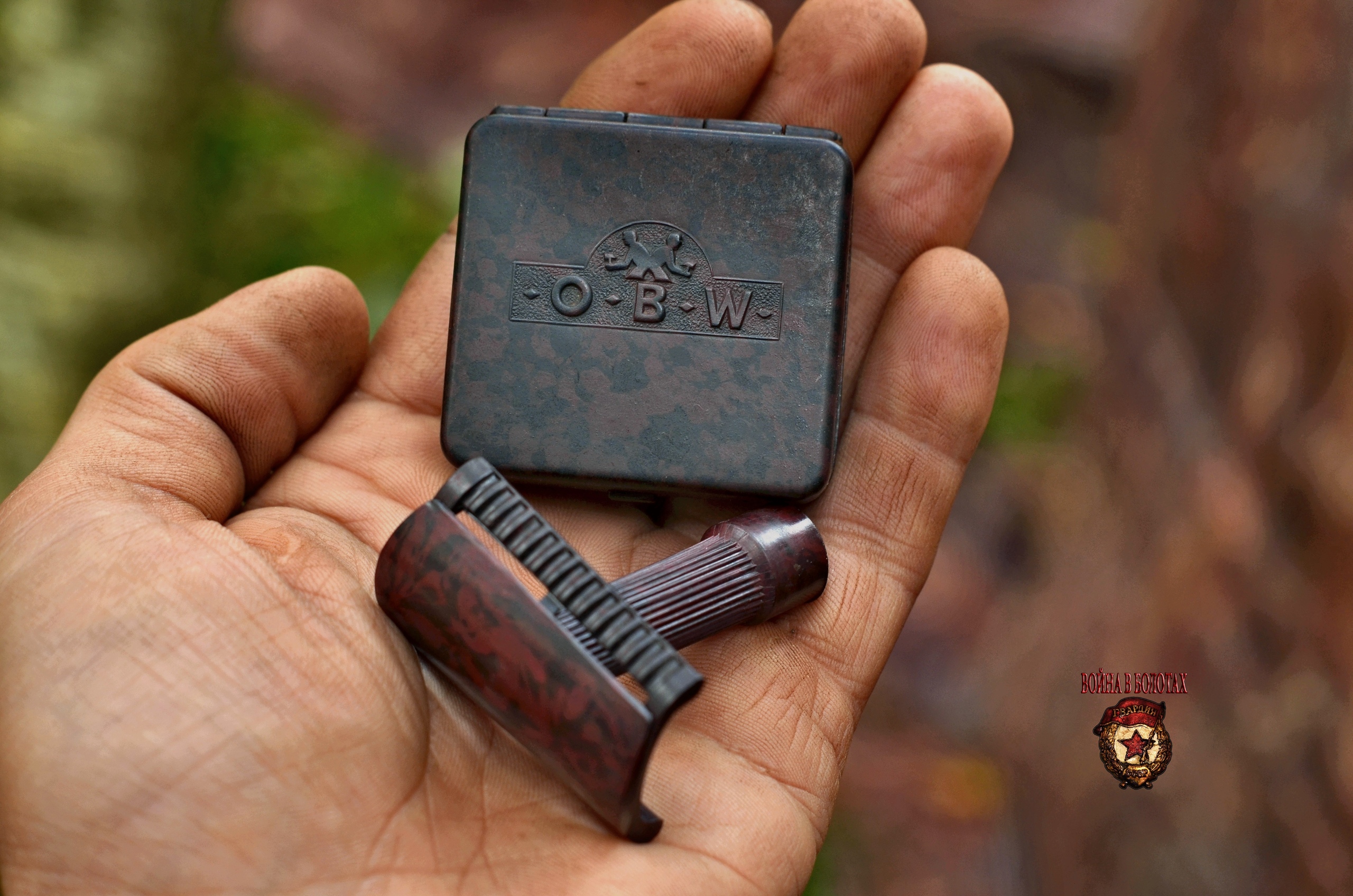 The razer is in perfect condition. You can shave right now. Photo by @swamp_war

The next finds were German cannon shells. These are quite frequent finds in the forest. Withdrawing another shell, I found something white nearby. It turned out to be a porcelain mug. Unfortunately the stigma was destroyed by time. Therefore, I did not manage to find out whether it was a German cup, or a Soviet one. 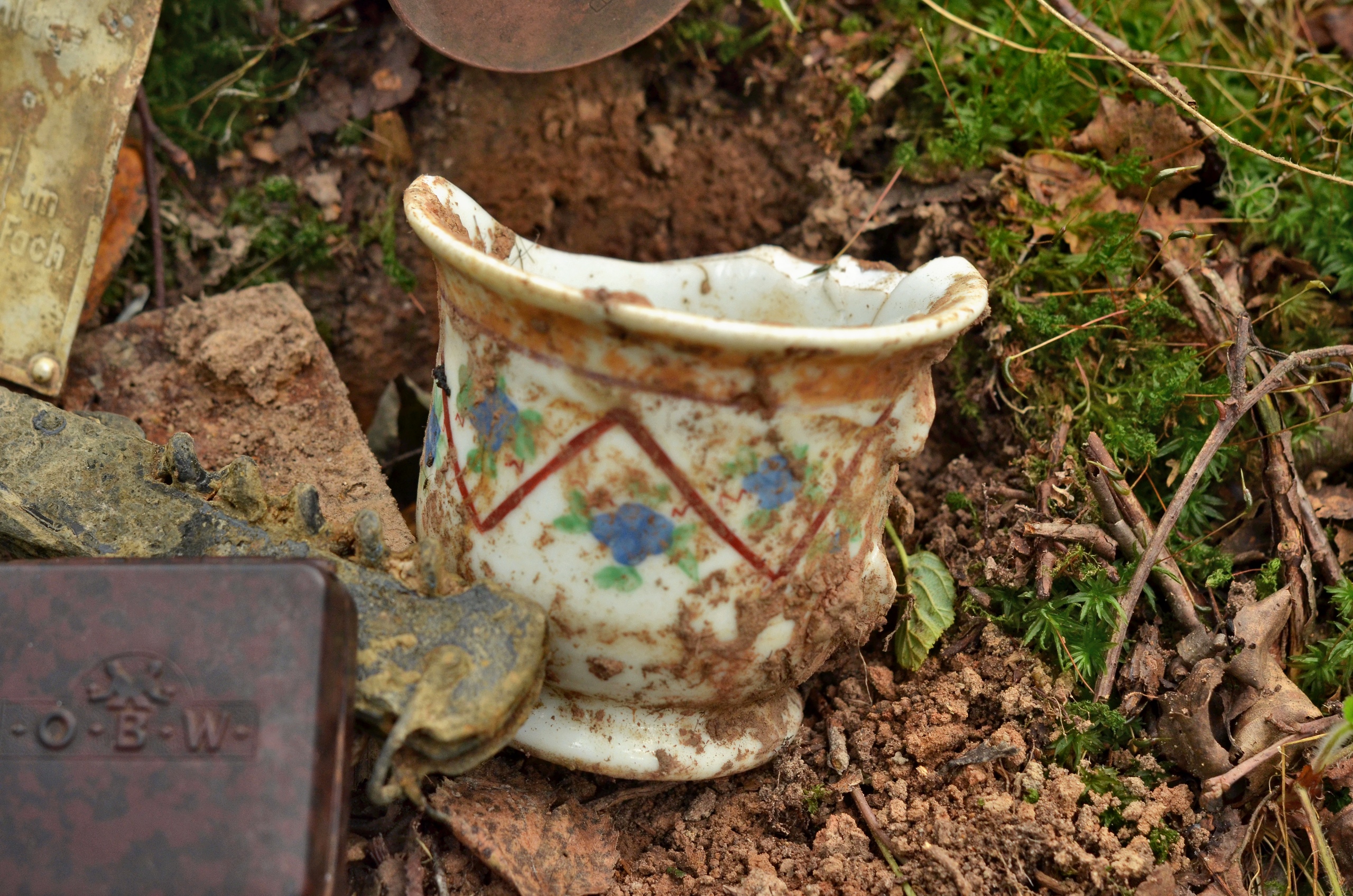 A beautiful porcelain mug. Unfortunately she was broken. Perhaps I broke it with a shovel. Photo by @swamp_war

Read: The remains of Wehrmacht soldiers abandoned at the military road of the Leningrad front (18+)

I also found an interesting German nameplate. If some of you know German – make a translation in the comments to this article. Perhaps you could also tell which thing this nameplate was a part of. 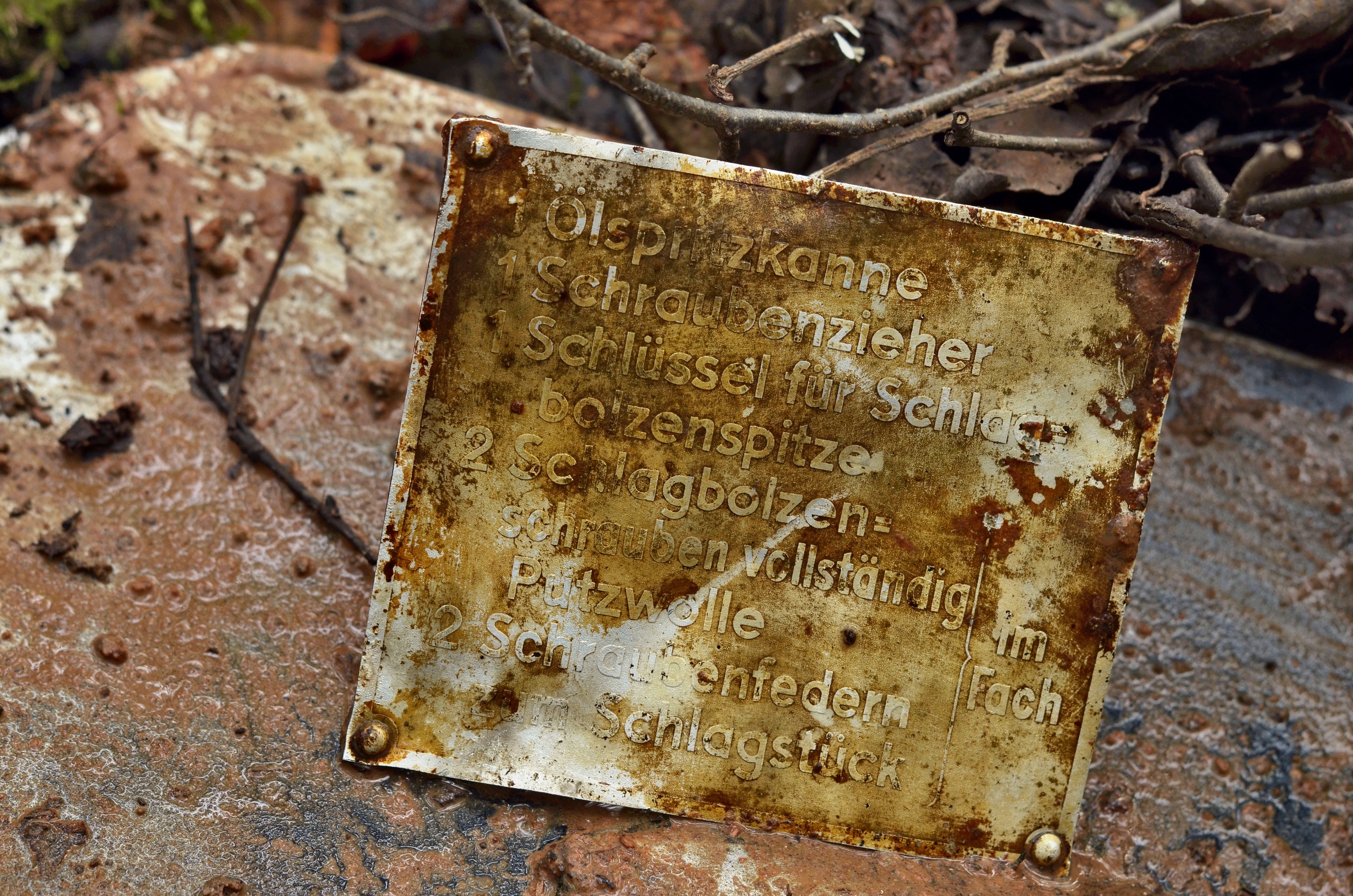 The nameplate may be from some kind of German transport. Photo by @swamp_war

I find grenades in almost every dugout. And this dugout was no exception. I dug up three German M-39 hand grenades in the original paint. These are dangerous finds. If you are excavating, try to avoid contact with explosive objects. There are a huge number of accidents every year due to neglect of safety measures. 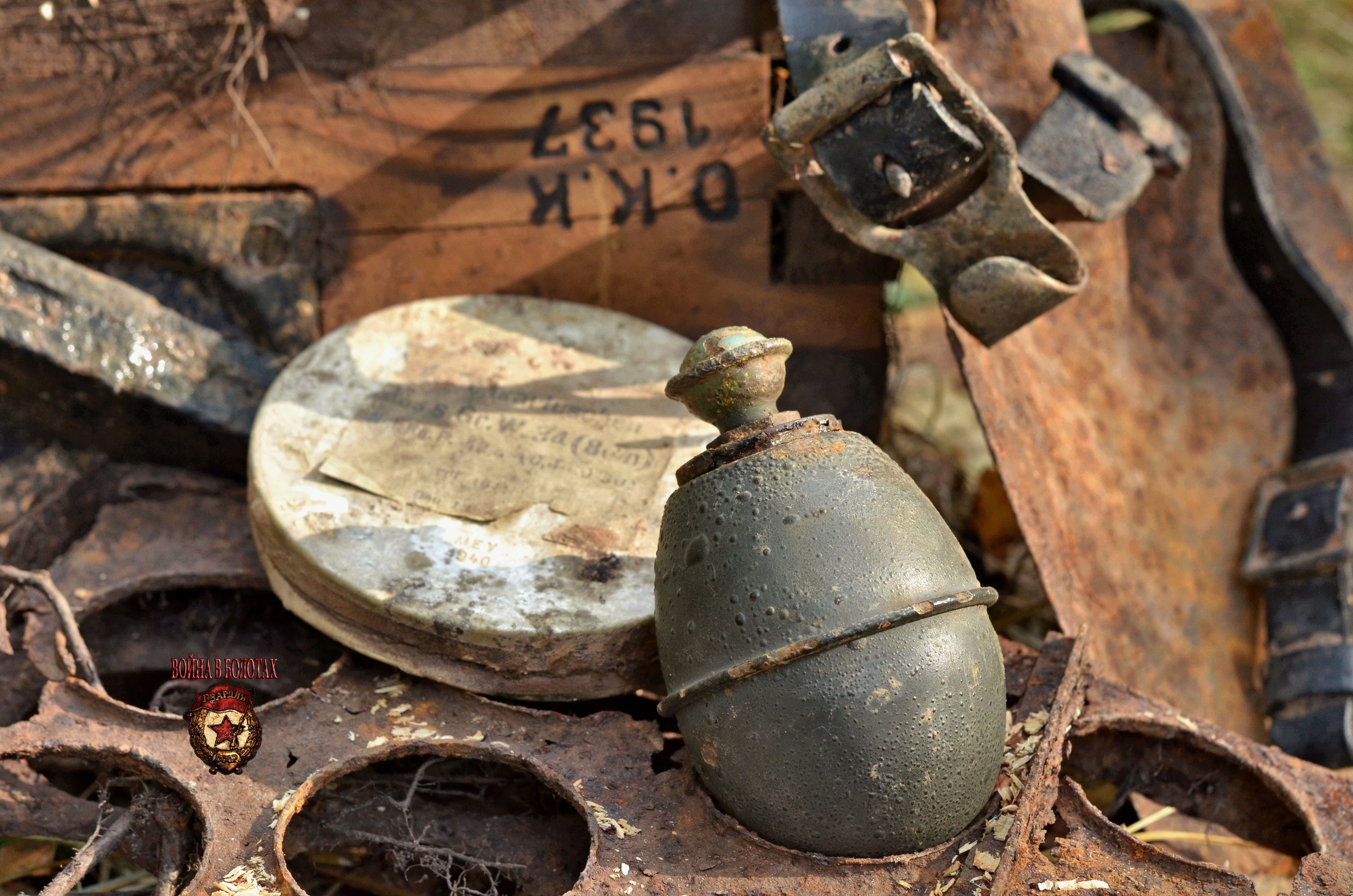 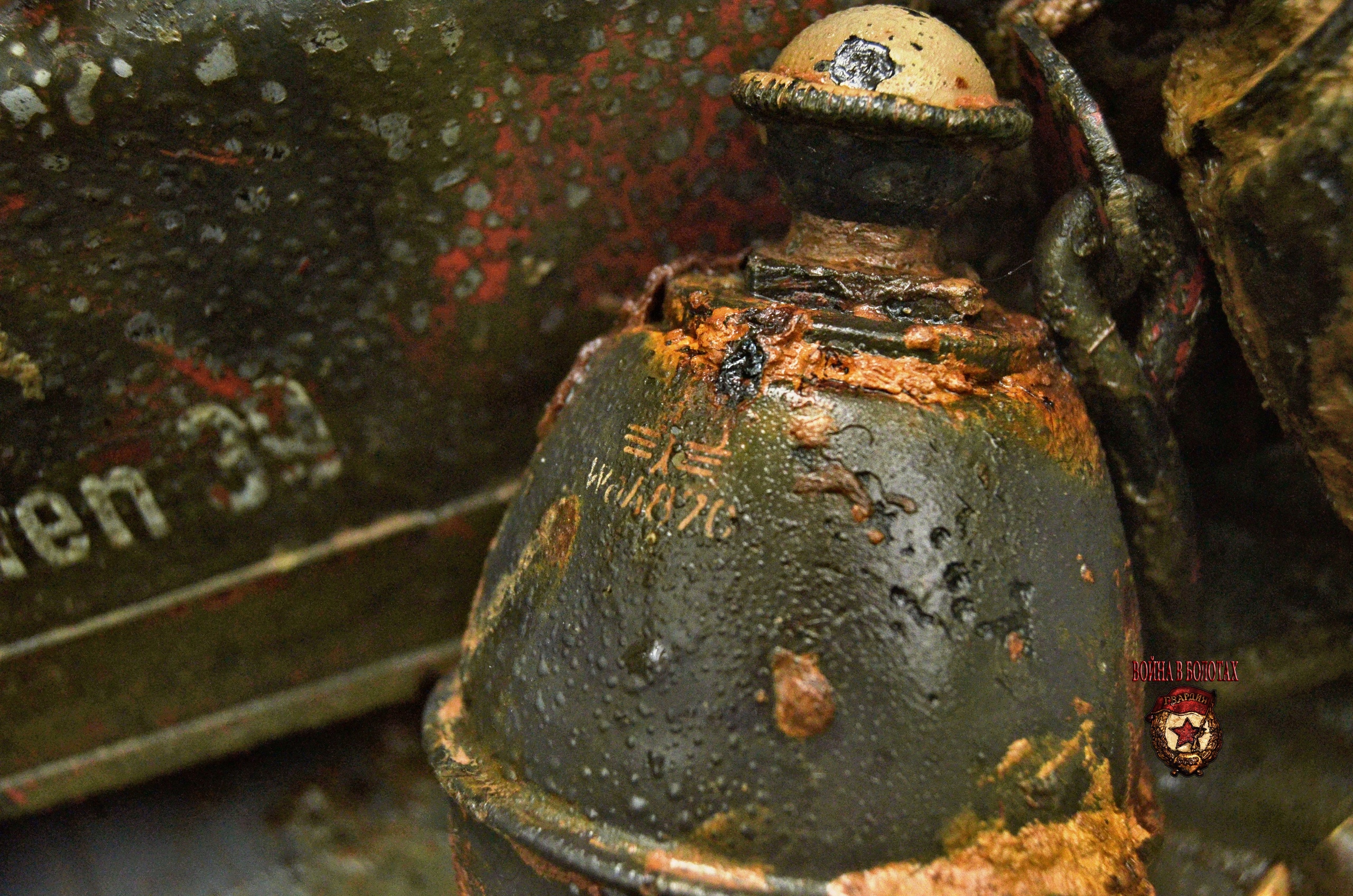 Another dangerous find from this dugout was the German mine – Tellermine 35 Stahl (T Mi 35 St) anti-tank mine. 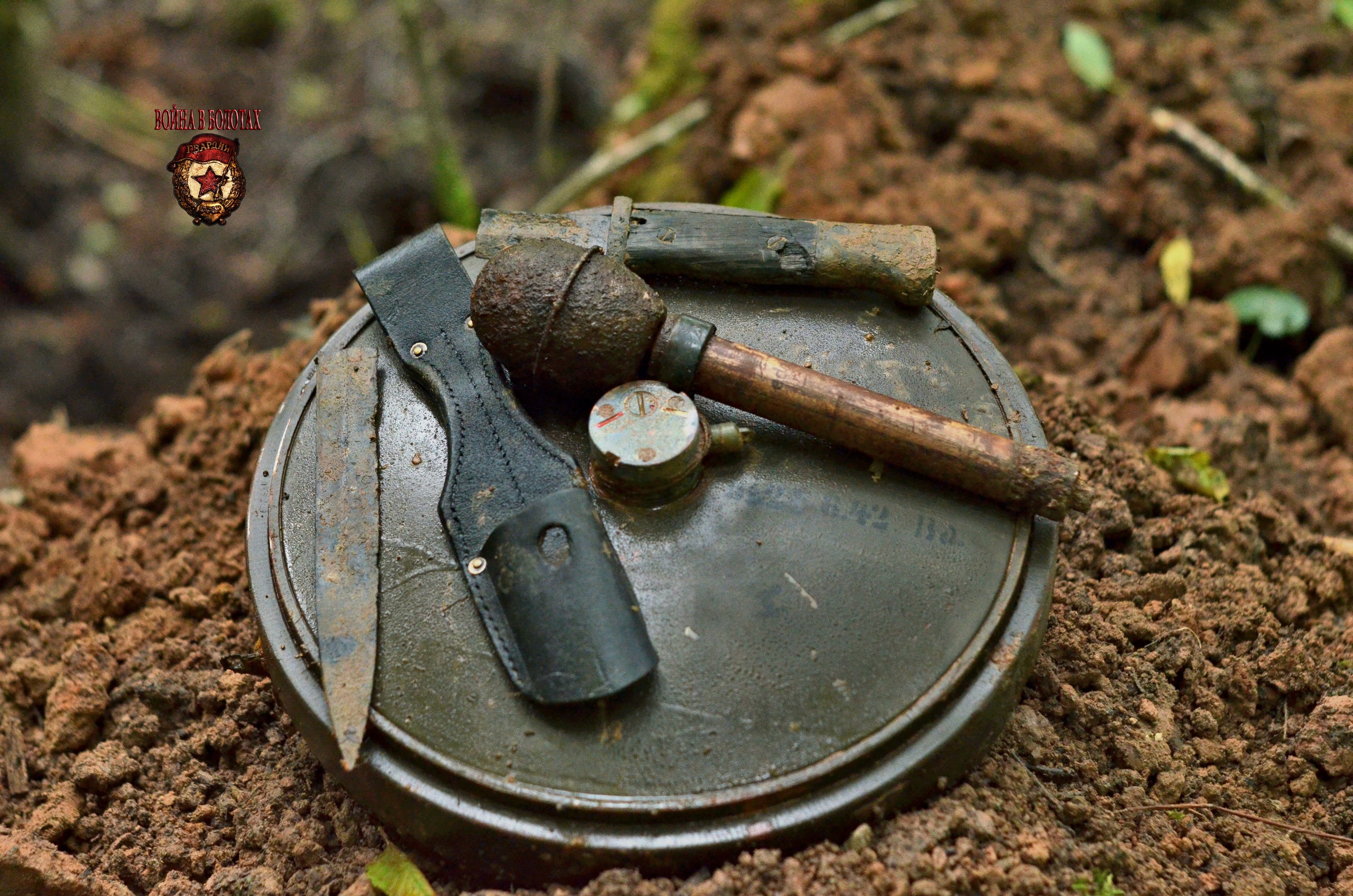 In the photo you can see a German anti-tank mine, on which lies an M-39 grenade with a wooden handle for more comfortable throwing. You can also see a German bayonet and a leather sheath for this bayonet. Photo by @swamp_war

Read: Artillery dugout and the remains of a soldier 18+ (15 photos)

I also found a part of a German book. The lack of oxygen helped save several pages. I would be grateful for the translation of the text in the comments to this article. 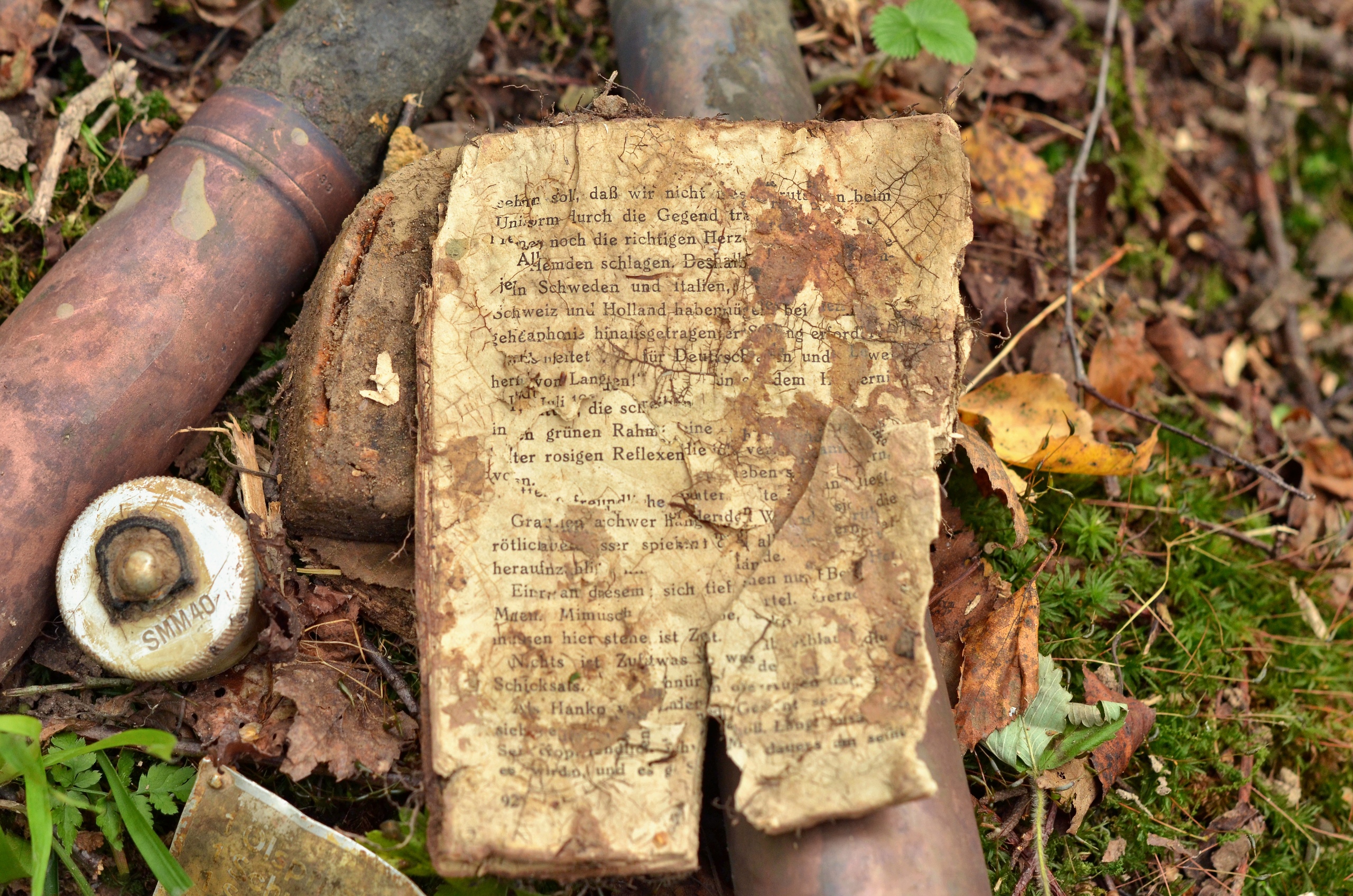 Remains of pages from a German book. Photo by @swamp_war

During the day, I managed to find a few more relics from the dugout. I will attach the photo below. Also at the end of the article I will attach a link to a video about this excavation. The video has English subtitles. I hope you found this article interesting. Thank you for attention. 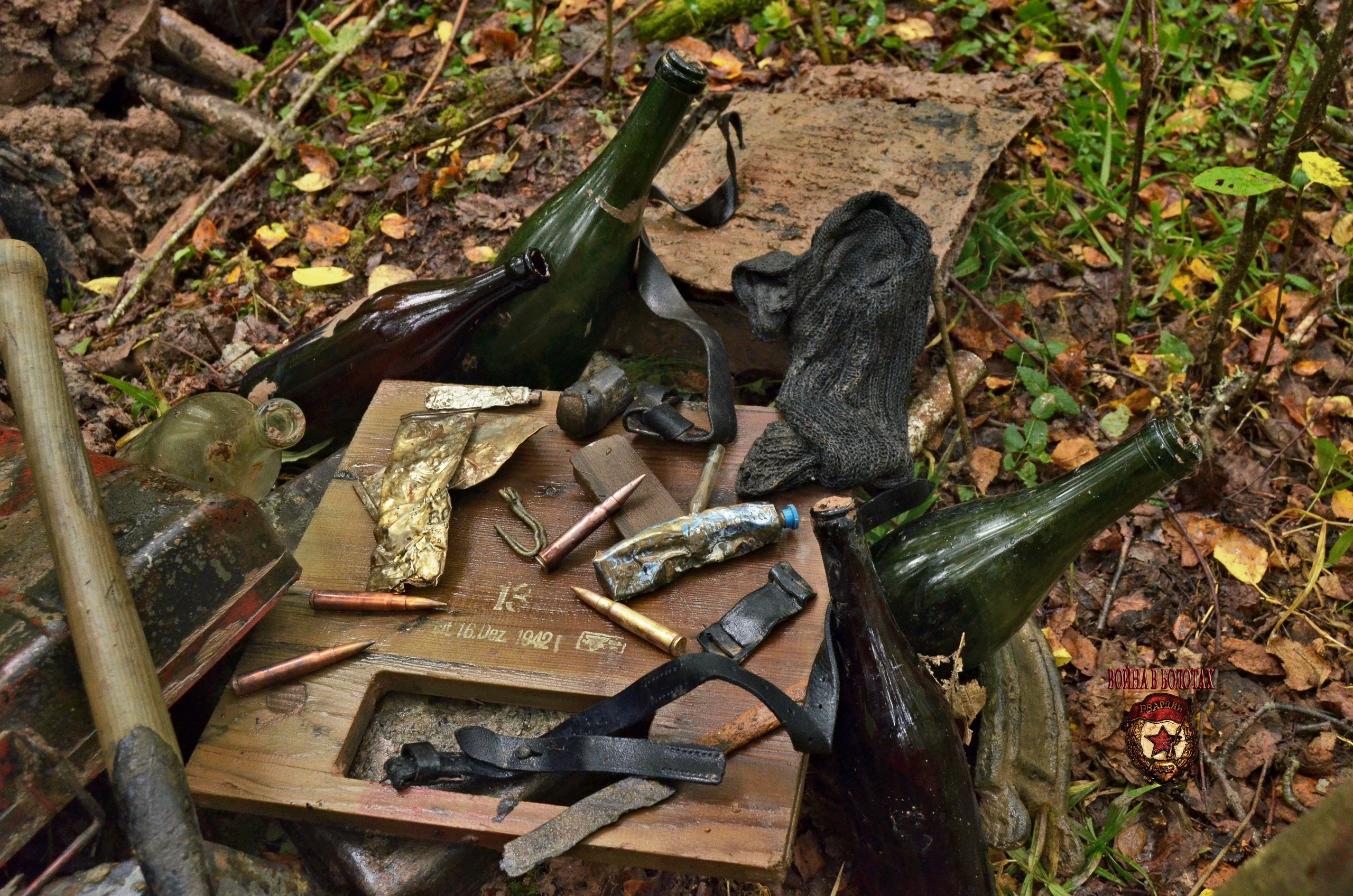 World War II relics from a German dugout. On the right you can see a German sock. Photo by @swamp_war 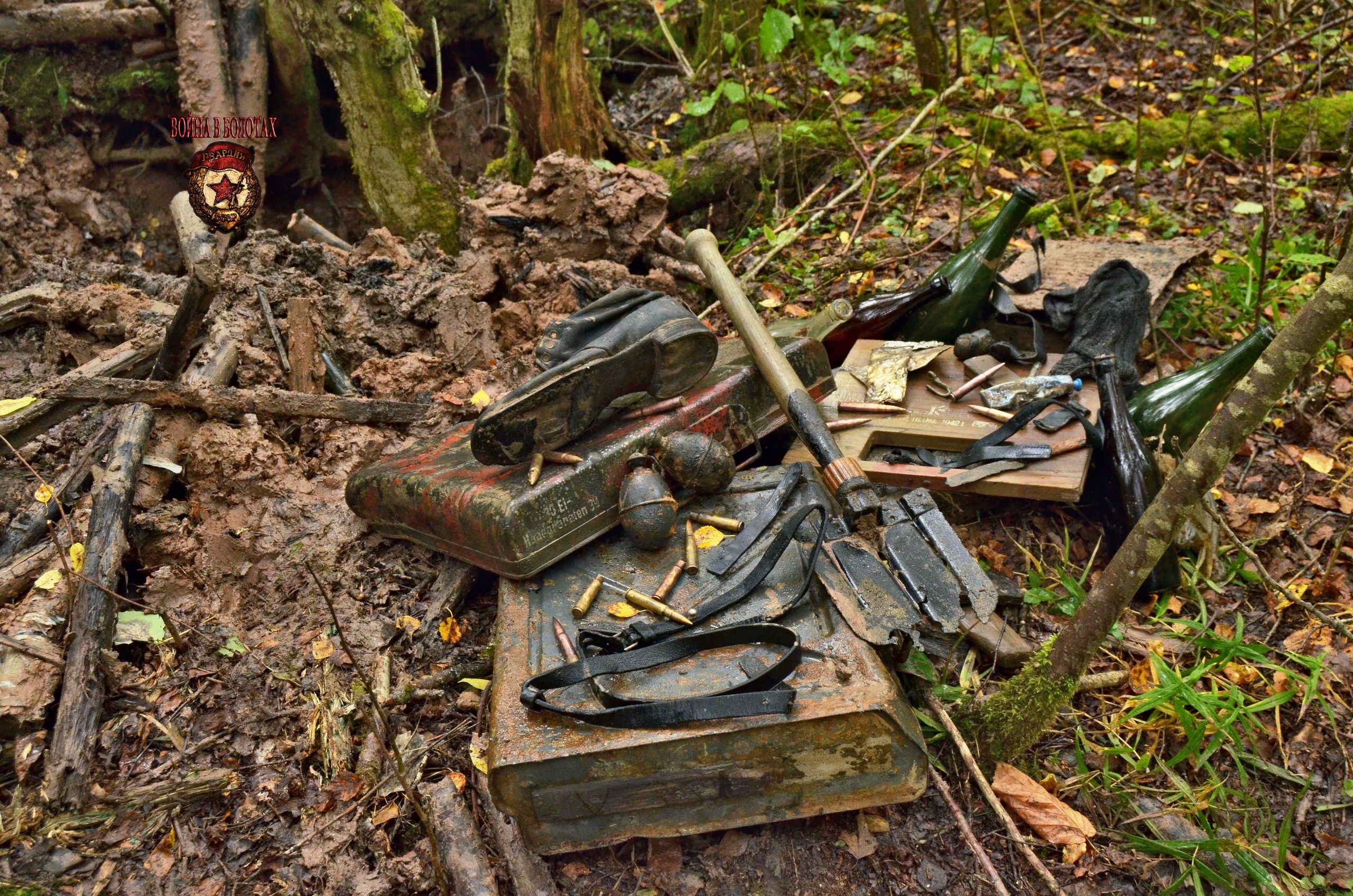 WWII relics from a German dugout. Photo by @swamp_war

CATEGORIES All FindsWar relics
TAGS dugoutLeningrad frontM-39razerRussiavideo
NEWER POSTJunkers Ju-87 found at the bottom of the Adriatic Sea
OLDER POSTPreparing the British for the Battle of Singapore. Photo in color