In this area in the 16th century stood a Cossack fortress city. The city was attacked many times by robbers and enemy troops, and was even burned several times. It was impossible to excavate at this place – very tall grass, spiky bushes, and small trees did not allow the use of a metal detector.

In 1718-1719, this settlement survived a severe plague epidemic, in the fight against which most of the city buildings, including two churches and fortress walls, were burned. Also, a plague epidemic affected the settlement in 1738. According to archaeological data, the population left the territory of the fortress at the end of the 18th century and  since then nobody  settled in this area. 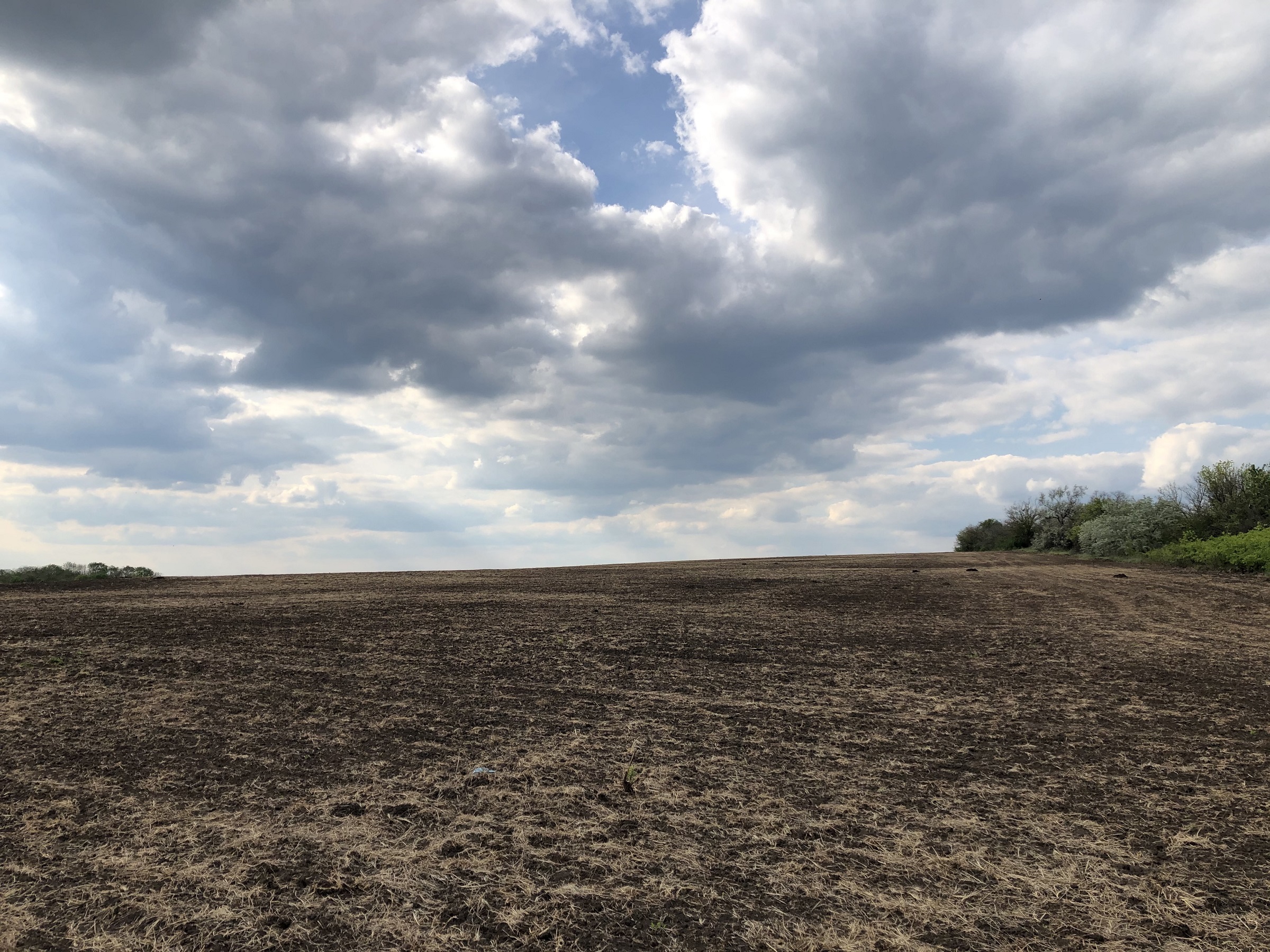 A fortress was built on this site in the 16th century by Cossacks. Photo by Vitamin.

Arriving at place, we quickly assembled the metal detectors and  went in search of relics. A large number of pieces of broken pottery made it clear that we were on the right track. . The whole field was covered with pieces of broken pottery. This is a good sign when looking for an excavation site. Photo by Vitamin.

After 5 minutes, I already had a find – an old copper Orthodox cross. Unfortunately, it was a little broken. But I was very happy, because this cross is more than 300 years old.

After a few more minutes, I found a small copper coin called “fish scales” because of its size and shape. My first find on this day. Photo by Vitamin. 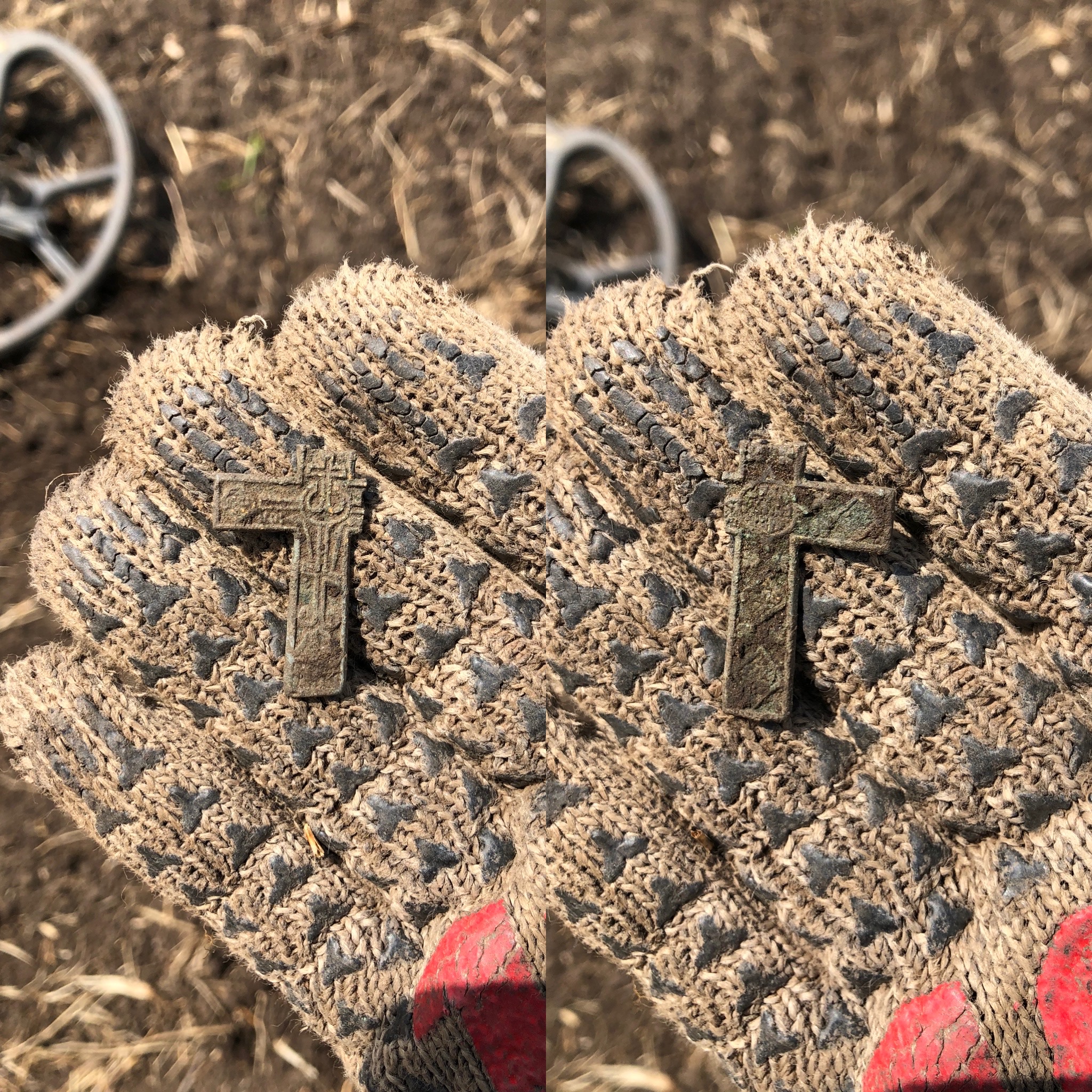 At the end of the article you can see this cross and other finds after cleaning. Photo by Vitamin. 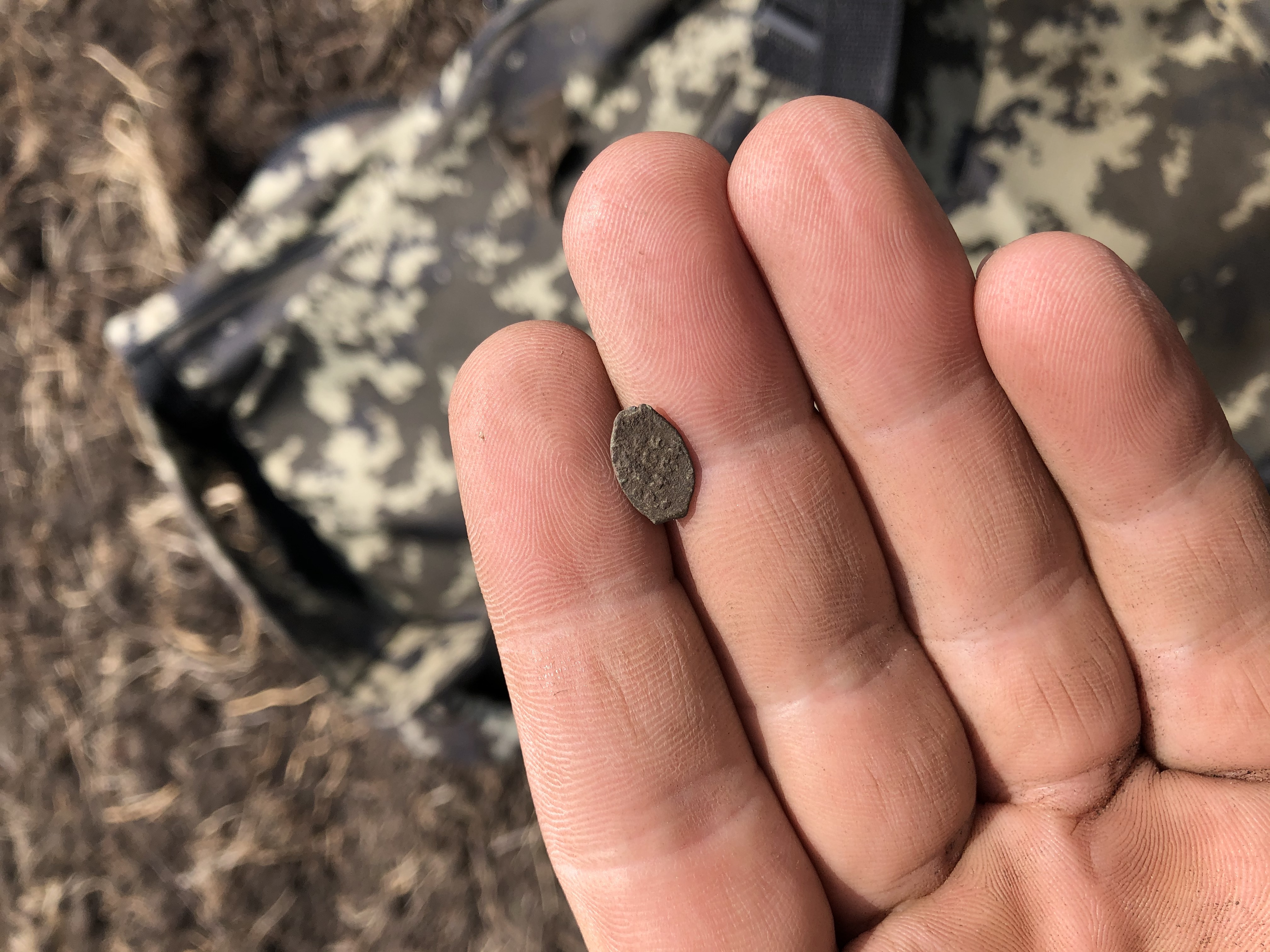 For this day, most of the finds were such copper coins. Photo by Vitamin.

After two hours of continuous excavation, we decided to take a break (we ate and brag about our finds). In total, in two hours we dug out 18 copper coins, 7 silver coins, 4 crosses and more. After rest, we continued excavations of the ancient settlement. 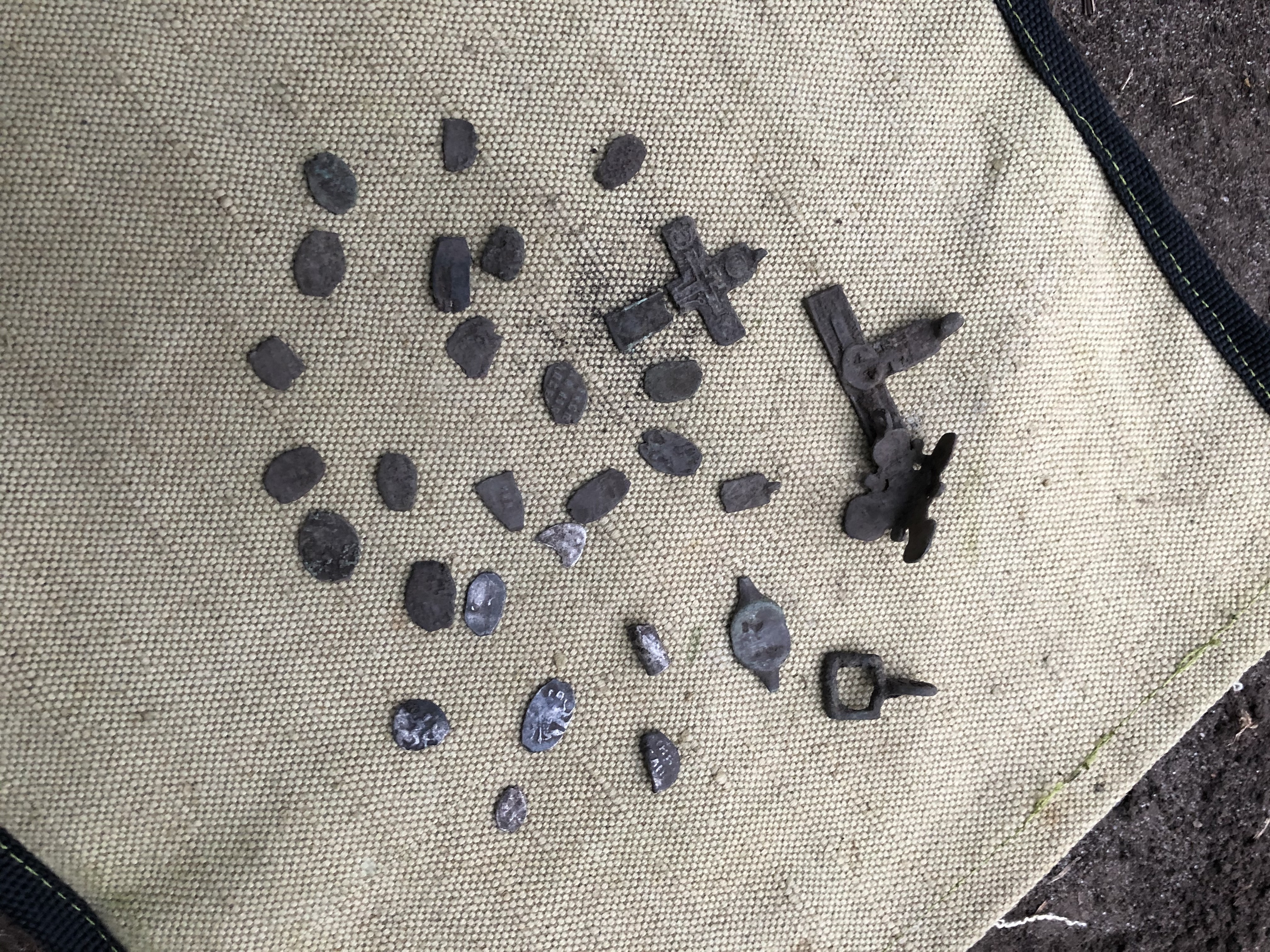 Our finds after two hours of excavation. Photo by Vitamin.

A companion dug up a very old pectoral cross, which in his opinion depicts Nikita Besogon, an early Christian saint, an apocryphal great martyr who was tortured and took death for Christ in Constantinople; the fictional son of the Roman emperor Maximian. He is widely known in Christian iconography in the motive of beating the demon-devil, who tempted him to accept paganism. Saint Nikita, beating the demon. Pectoral cross of the first half of the XVI century. Photo by Vitamin.

Among the coins of Tsarist Russia, we found Polish coins of that period. 1 – Polish solid. 2 – Polish groschen. Polish coins from the Middle Ages. Photo by Vitamin.

We stayed on the field until midnight. As a result, for that day with the help of a metal detector we were able to find about 100 copper and silver coins, 7 Orthodox crosses, a Cossack copper ring, and more. We were tired but pleased with the excavation results. 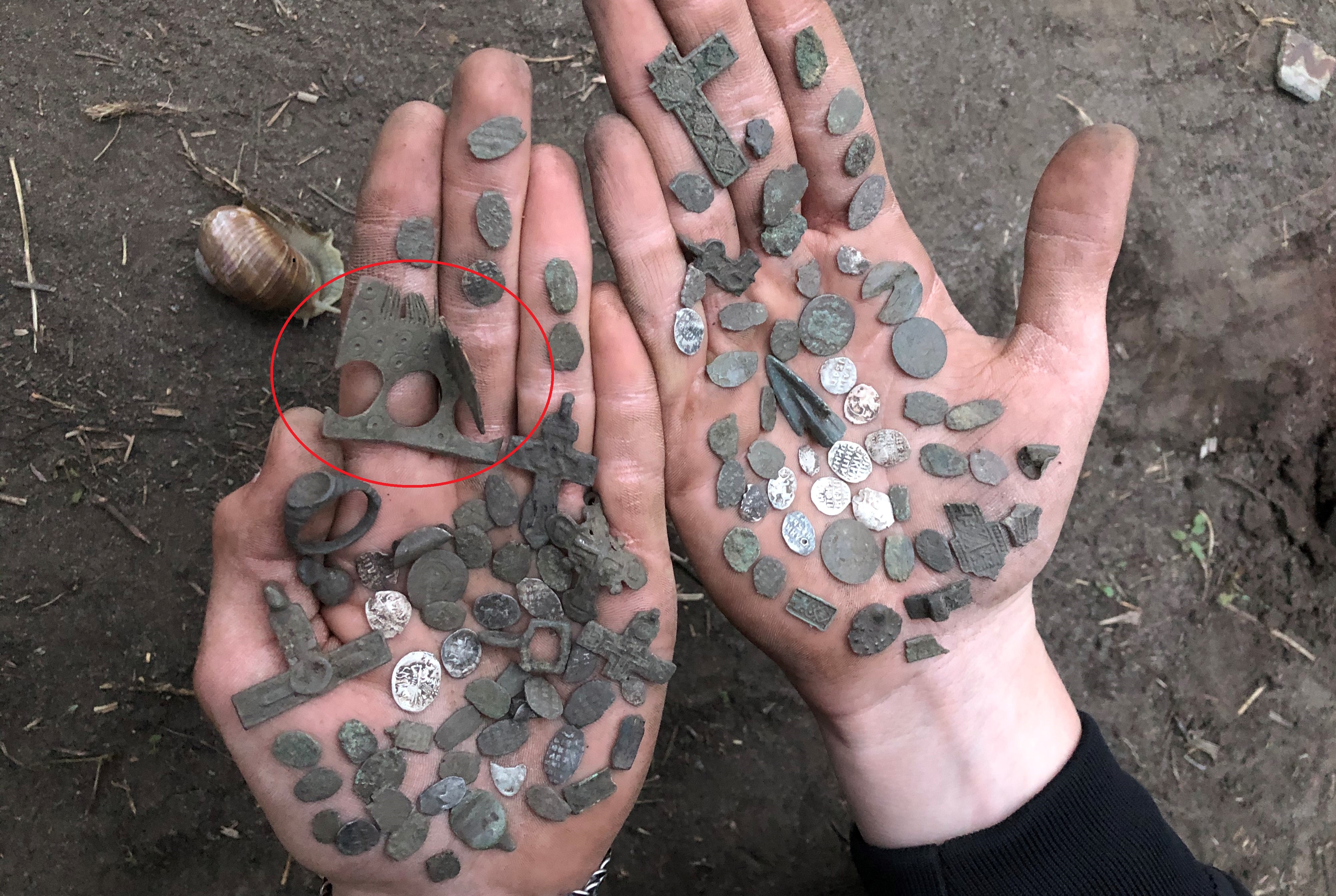 Almost all the finds of that day. The red oval marks the comb for the beard. Photo by Vitamin. 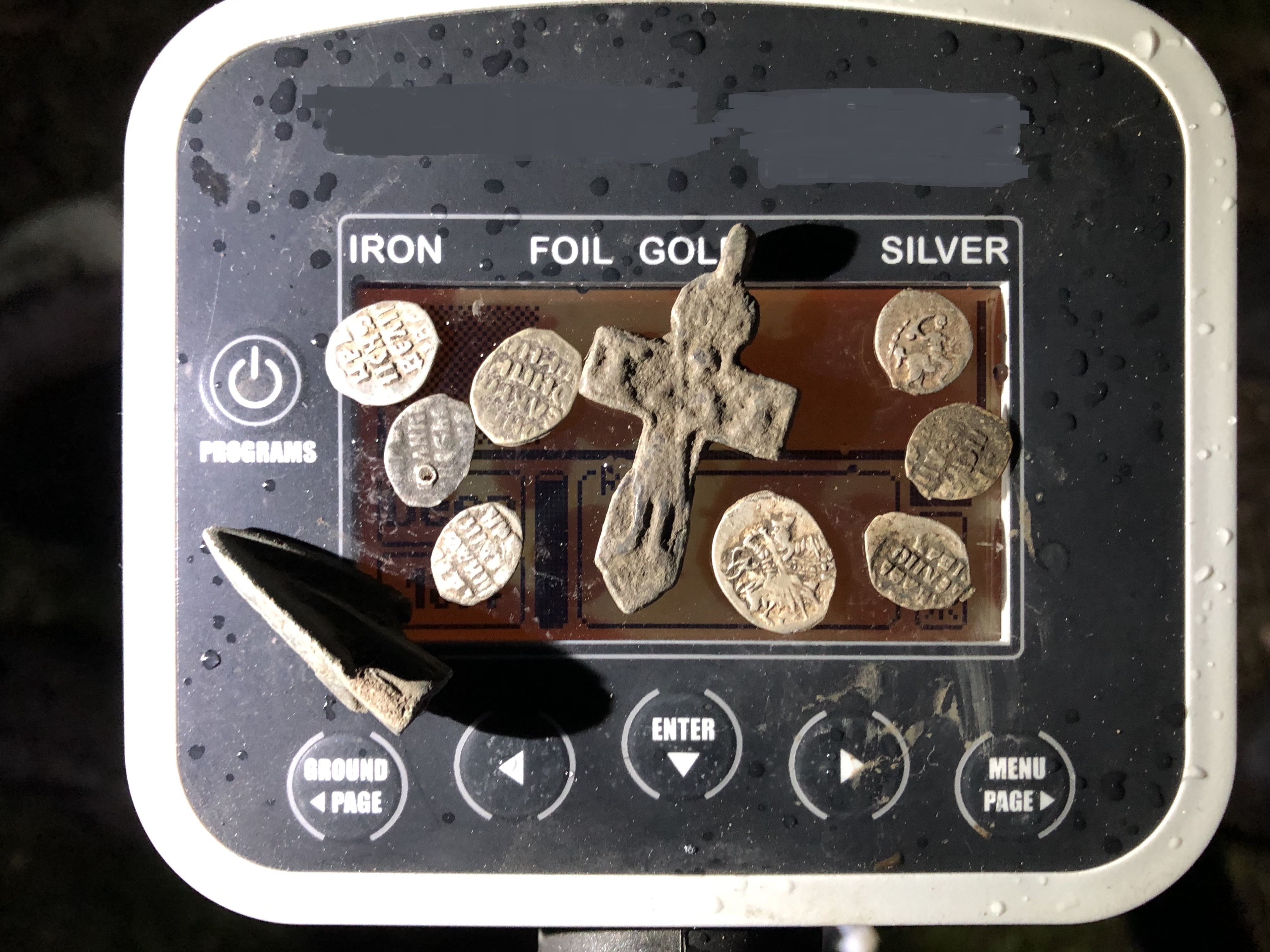 Some interesting finds of that day. Photo by Vitamin.

As I promised – here is a photo of some brushed finds. The method of cleaning is boiling in the oil. If you are interested in learning more about this method, write a comment under the article, or write to me on Instagram (@vitalikaranevich). 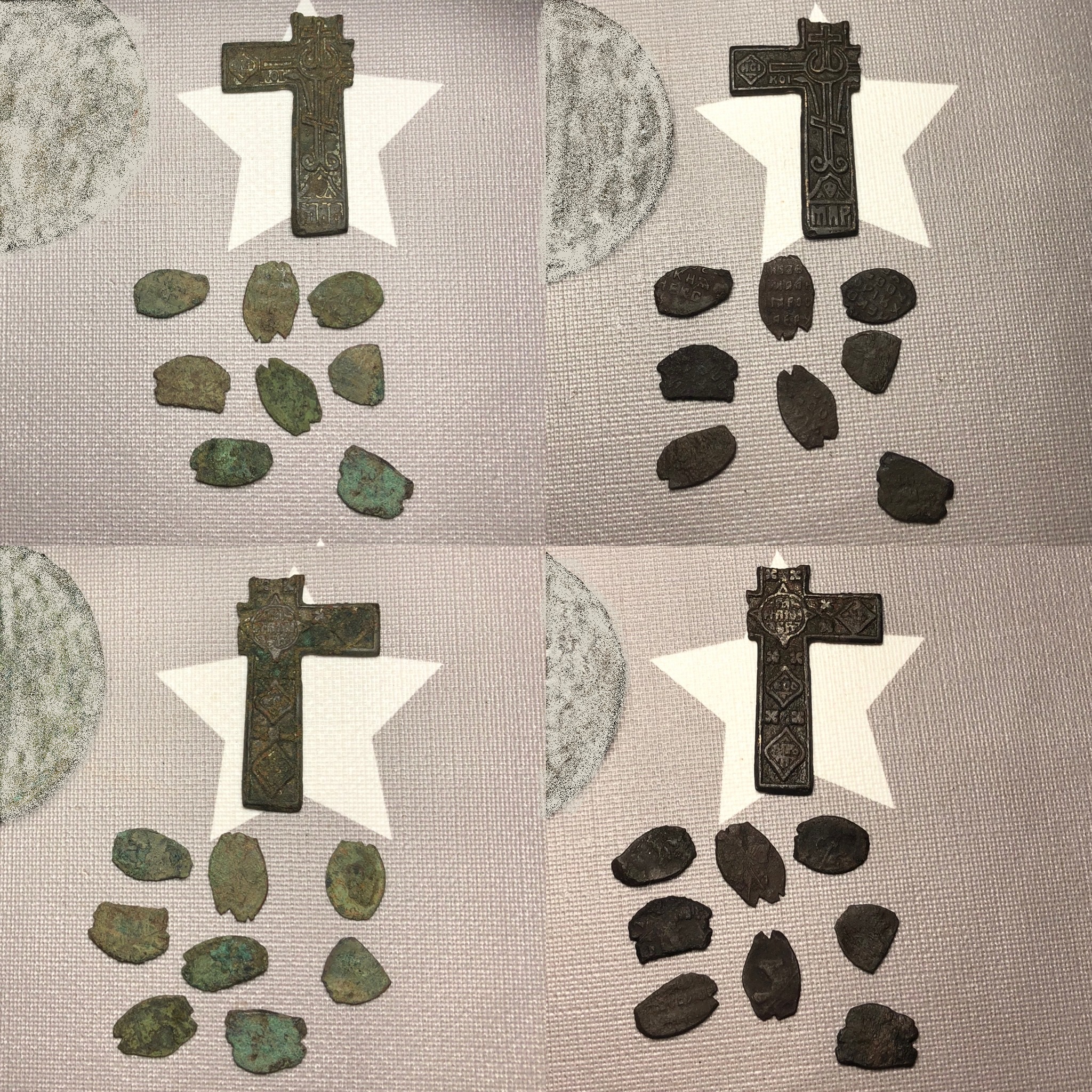 Some of my finds after cleaning. Photo by Vitamin.