The battles for the capital of Ukraine in 1941 were particularly fierce and bloody. The defensive line around Kyiv played an important role in deterring the German offensive. Some of the bunkers hold the defense for more than 70 days, fully surrounded by the enemy. Just imagine, 70 days to fight hard, in a bunker where there were a bunch of dead and wounded friends, little air, powder gases and complete suspense … Where is the help? How long do you have to fight? 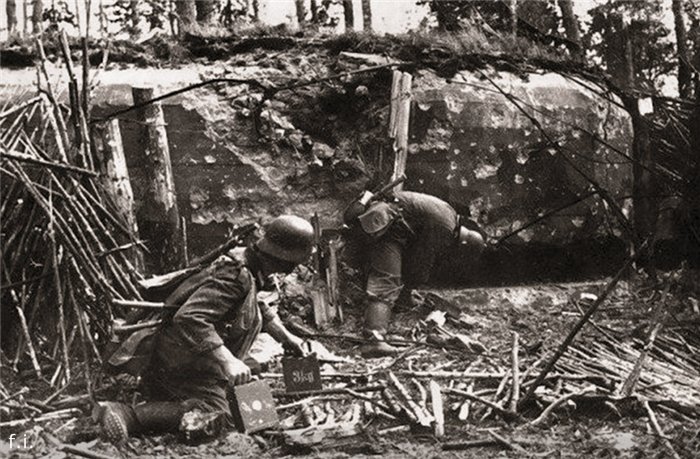 The Kiev Fortified Region (Russian abbreviation КиУР, УР-1, 1-й укреплённый район, 1-й укрепрайон) is a fortified district in the Kiev area, a complex of defensive structures, consisting of permanent and field fortifications and engineering obstacles. It was built in the period from 1929 to 1941 for the protection of the old border of the USSR. The total length of the fortified region is about 85 km between the flanks, which are anchored on the river Dnieper, and the depth of the defensive zone ranges from 1 to 6 km.

It was near one of the bunkers that these two soldiers were found. They lay at a depth of 5-10 centimeters, almost on the surface. All this time they were not buried, just every year more and more leaves fell on them, and hid from human eyes …

Both soldiers were killed by the landmine. The funnel from it was a meter away from the dead. They got terrible wounds …

In this form, it has been lying in the ground for over 70 years.

This soldier had his feet torn off in a result of the explosion. Numerous shards of damage were all over the body. Part of the upper jaw was dislodged. Unfortunately, the locket with his personal data was damaged, the soldier was left unknown forever …

The second soldier was closer to the epicenter of the blast …

The second soldier was closer to the center of the blast. His skull was completely destroyed, fragments ripped through his body. The leg was torn off and part of the pelvis could not be found. There was also no medallion. Both soldiers remained unnamed.

Soldiers were found and exhumed by searchers from “Vertical”

These photos in color were taken by a USA citizen from Utah who lived in Berlin as part of his work for the Third Reich ... Read More