The secret report of the Red Army artillery research and development testing ground on the tests of the 18-ton Famo tractor was released in February 1941. In the traditions of that time, the car was called a “tractor” because of its tracked chassis. The main goal was to determine the suitability of a half-track tractor for towing heavy artillery systems of high power. At the same time, it was planned to test the 12-ton half-track Daimler-Benz Sd.Kfz.8 tractor, but it came to the test site in a defective state. According to the report, it was already in an inoperative state when entering the artillery range from the “tank” range in Kubinka. Whether it was put out of action at the GABTU is unknown, but the gunners were unable to repair the Daimler-Benz engine on their own. As a result, they started testing the Sd.Kfz.9 Famo. 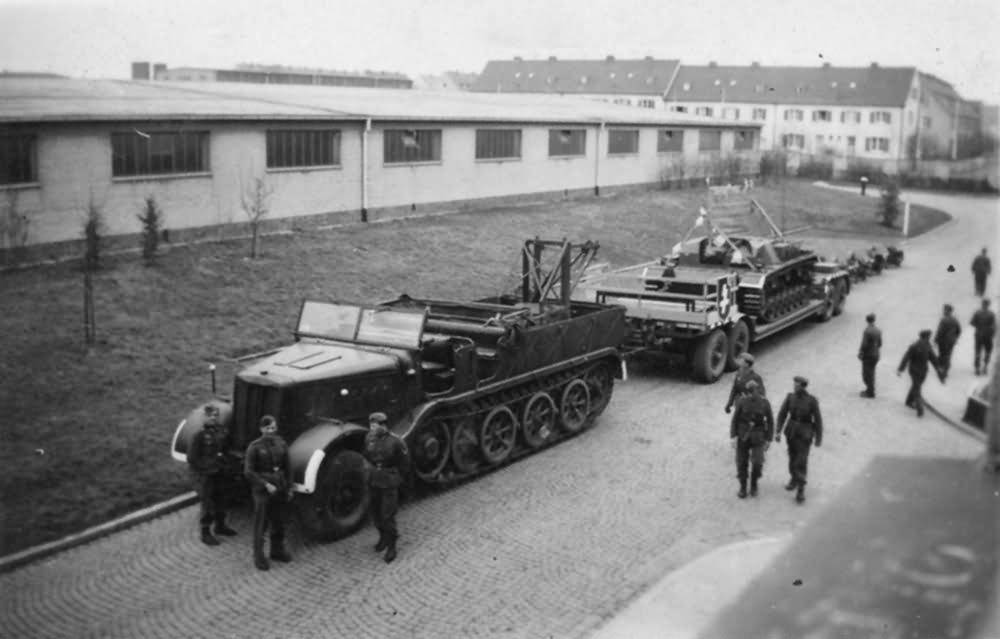 German soldiers familiarize themselves with an 18-ton artillery tractor. Photo by worldwarphotos.info

The German tractor, bought shortly before the war in Germany, had to work hard: at the test range from January 25 to February 5, 1941, it had to transport parts of heavy artillery pieces through snow half a meter deep, along rolled highways and country roads. It is noteworthy that the organizers expected to carry out comparative tests of the “German” with the Soviet heavy tractor “Voroshilovets”. But … At the beginning of 1941, the artillery range did not have a working tractor at its disposal.

We must pay tribute to the specialists of the artillery range: the test program was verified to the smallest detail. For example, on predetermined sections of the highway along which the Famo tractor drove, the angles of ascents and descents up to minutes were indicated. This is strikingly different from the testing of captured equipment in wartime, when engineers sometimes did not even have suitable training grounds. For Famo, four trailers of different weights were prepared: a barreled carriage of a 305 mm Skoda cannon (19 tons), a machine for the same weapon (20 tons), a barrel carriage for a 211-mm German howitzer (11 tons) and its 12-ton machine. On one of the sections of the rolled highway, a tractor with an 11-ton trailer accelerated to an average of 43.4 km / h – a decent indicator for a heavy vehicle. However, it was impossible to operate the giant half-track vehicle normally at such speeds, so the workers were at speeds up to 15 km / h. 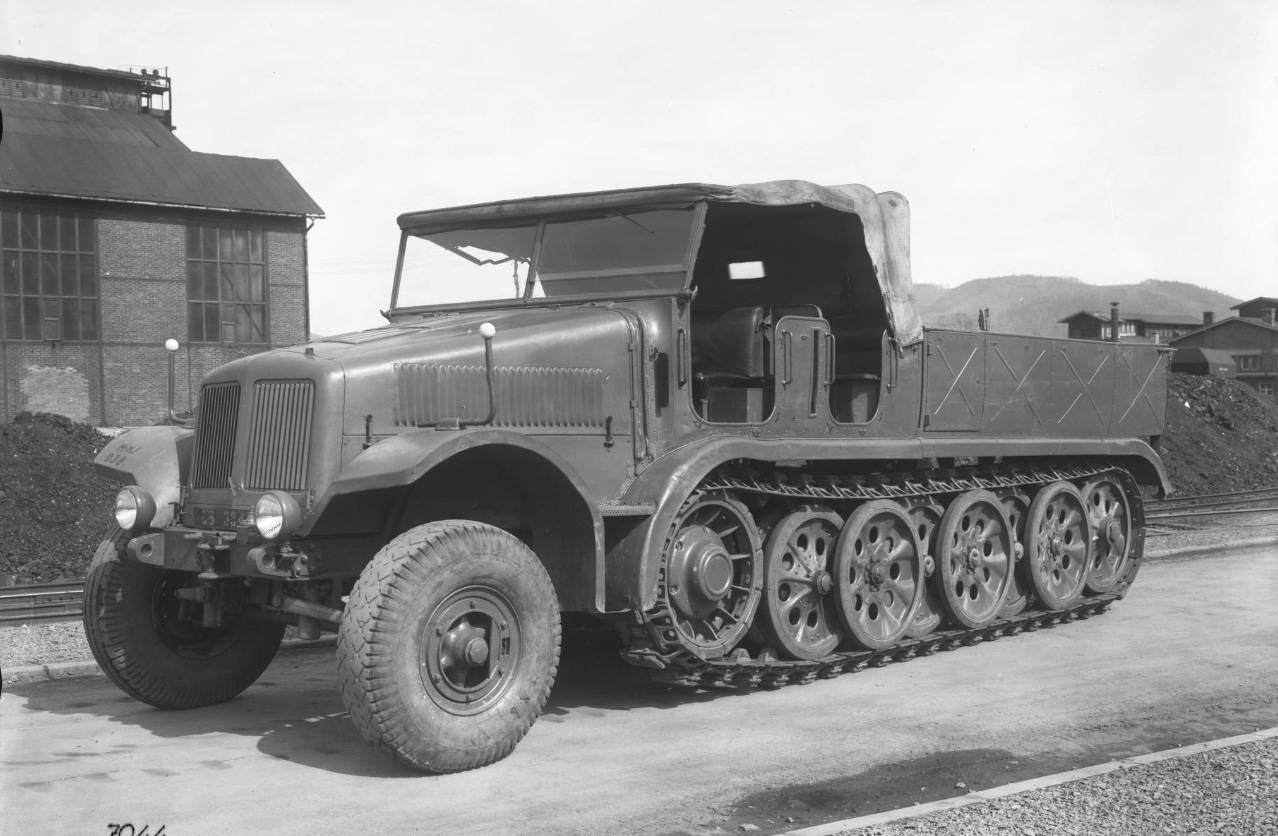 Approximately 2,500 were produced between 1938 and 1945. Photo by worldwarphotos.info 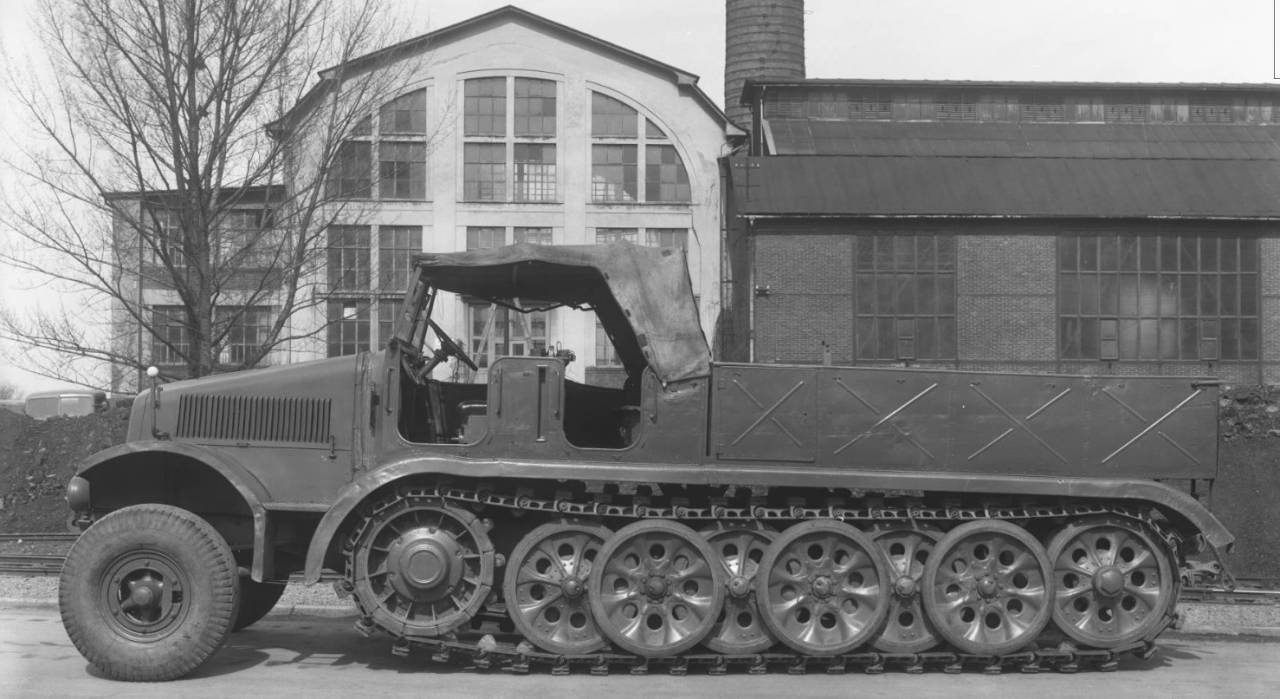 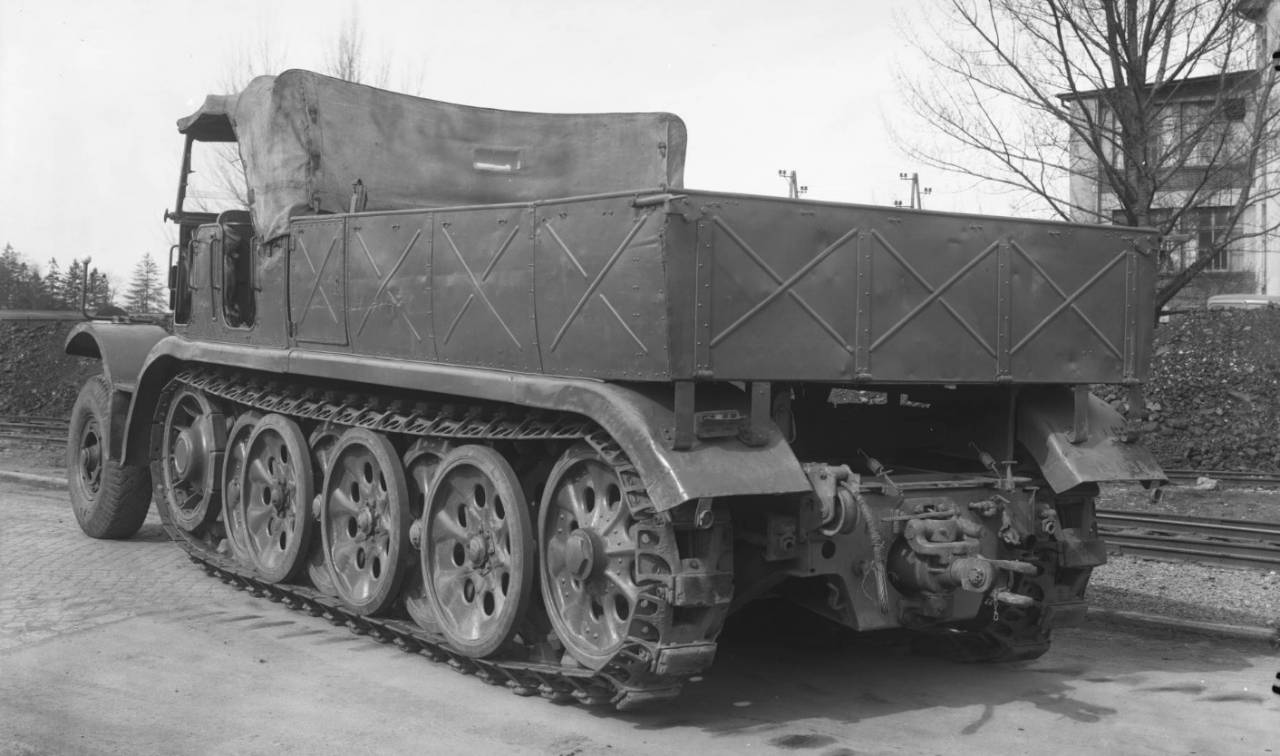 Famo took snow virgin lands of half a meter depth at speeds from 3.5 to 11.3 km / h, depending on the weight of the trailer. Moreover, before the tests, the car previously made a track in the snow without a trailer, otherwise it would immediately get bogged down. When it came to storming the slopes, with the heaviest trailer, the German tractor could not overcome the 11-degree slope, covered with 87 cm of snow. In general, the cross-country ability of the tractor with a 20-ton trailer was recognized by the testers of the landfill as not entirely satisfactory.

Tests of the tractor winch were a separate program. 5 people had to unwind the 100-meter cable. According to the most conservative estimates, its maximum tractive effort exceeded 4600 kgs. After some tests of the unit, the testers wrote in the report that “the winch is successful in design and works quite reliably.”

The 18 ton Famo was a hefty car. Its height almost reached three meters, and its length exceeded eight meters. Naturally, this tractor was clumsy. As the test engineers of the artillery range noted, the turning radius on 26-cm snow was 18 meters. And it’s to the right. To the left, the radius was from 19 to 21 meters. When the machine of the Czechoslovak cannon was hooked up to the tractor, the turning radius became from 22.5 to 32.25 meters. On the snow, the Famo was almost indifferent to where and how the wheels were turned, the movement was mainly along the radius of the tracks. As a result, the German tractor failed all the maneuvering tests.

In the artillery park with trailers, the tractor could not turn at all. After an overnight winter stop, Famo almost completely lost its ability to maneuver: it needed to ride for 10-15 minutes before the oil in the differential box warmed up. The wheels made it difficult for the car to move on muddy roads. The wheels pressed on the ground with a force of 4 kg / cm2, and the tracks – 0.7-2.33 kg / cm2 – the tractor had a kind of plow in the form of two wheels on the front end. At the same time, Famo’s grip on the road was always insufficient and with a hook load of about 3 tons, the tractor began to slip. 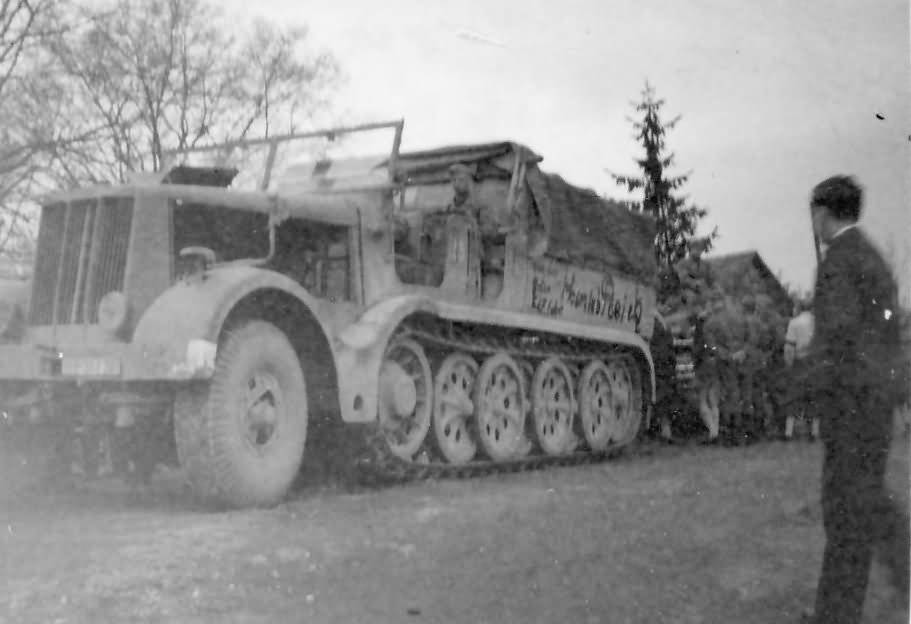 German half-track that was a  widespread use in World War II. Photo by worldwarphotos.info

How Famo engine started in the harsh Russian winter.

The first time it was launched at the test site on January 25, preliminary warmed up with hot water and towed by two Kommunar tractors. The engine did not want to start the first time. After keeping the car in the cold for two days, it was decided to start the engine using an electric starter. The temperature outside the tractor was quite harmless – minus 14 degrees. Initially, the engine was warmed up with hot water to 80 degrees, which took 170 liters (or 11 buckets) with a cooling system capacity of 90 liters. An attempt to start the engine with an electric starter was in vain. The Famo also had an inertial starter as standard. Four people spun the inertia system for three minutes, but the Maybach 12-cylinder engine would not start. As a result, tractors were brought to the rescue again, dragging the Famo with the gear engaged and ignition. It took only 20 meters. To justify the German tractor, the testers in the report wrote that in all subsequent cases, the engine reliably started from the electric starter. At the same time, the temperature dropped to minus 25 degrees on some days. But in the end, the engine, which required expensive high-octane gasoline, was still rejected by the testers due to excessive fuel consumption. On the highway in winter, a tractor with a trailer could travel no more than 150 kilometers at one gas filling.

The high production culture and well thought design are evidenced by the high reliability of the machine. For two and a half thousand test kilometers, the Famo showed only cracks in the exhaust pipe, the speedometer cable and the safety pin of the track tensioner burst. This, recall, in the conditions of Russian frosts. Double differential and winch circuits schema. They made an impression on the Soviet testers. Source: Report of the Artillery Research Experimental Range of the Red Army. 1941 year

The torsion bar suspension and chassis aroused great interest among Soviet researchers. Large rollers, firstly, spared the rubber tires, and, secondly, evenly distributed the load on the ground. The unusual mating of the tracks with the help of pins on needle bearings obviously reduced the losses due to the rotation of the tracks, but seriously complicated and made the design more expensive. Therefore, directly in the report, test engineers wrote that before putting into production such solutions, it is necessary to conduct thorough tests of German tracks. If they only knew that in just six months, the Soviet tank building industry will have completely different tasks: to promptly evacuate production inland and organize mass production of armored vehicles at the lowest cost!

Summing up the winter tests of the heavy German Famo, Soviet testers did not recommend using it as an artillery tractor. Despite the good ergonomics, reliability and well-thought-out individual components, the gunners were not satisfied with the clumsiness, the gluttonous carburetor engine and insufficient grip.

In less than four months, war will begin, and the gunners’ conclusions will receive mixed confirmation on the battlefield. Outdated and not the most perfect Soviet tractors will prevail over the elegantly executed half-track structures of the engineers of the Third Reich. Field tests do not always guarantee objectivity, especially in military affairs.

CATEGORIES CollectionsHistory of weapone
TAGS artillery tractorFamo tractorhalf-trackRussiaSd.Kfz.9 Famotractorvideo
NEWER POSTSoldiers’ grave was found based on photos in 1942 from the place of execution
OLDER POSTCannon carriage of the Cossack time was found at the bottom of the Dnipro