In this article you will learn about the world’s first anti-tank rifle – the Mauser Tankgewehr M1918, which was invented in Germany and actively used during the First World War.

In September 1916, Great Britain first used tanks on the battlefield, and soon this technique became a regular component of the battles. The German army immediately began to look for ways to deal with tanks, including creation of anti-tank weapons suitable for use by infantry. The most notable result of such searches was the appearance of the Tankgewehr M1918 anti-tank rifle from Mauser. 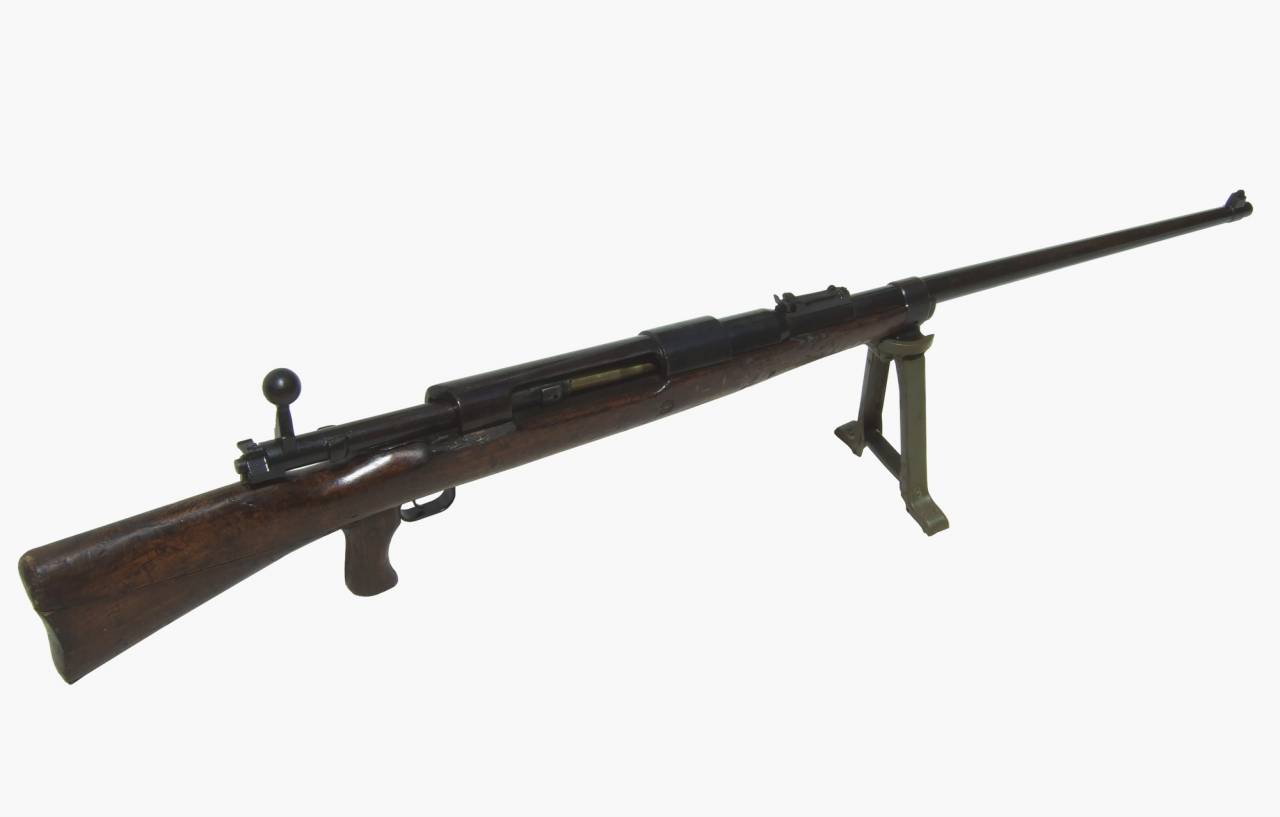 The Mauser 13 mm anti-tank rifle with bipod from MG 08/15. Photo by Sassik.livejournal.com

By 1916, the German army was already armed with an armor-piercing rifle cartridge of 7.92×57 mm with a Spitzgeschoss mit Kern (SmK) type bullet. The parameters of such ammunition were sufficient to defeat the early British tanks, and regular army rifles turned into anti-tank rifles. In addition, the SmK bullet was quite effective in anti-aircraft fire.

However, after a few months more advanced tanks appeared with enhanced armor. The survivability of aircraft also grew steadily. The SmK bullet lost its effectiveness and required replacement. The army needed new means to combat armored vehicles and aircraft.

In October 1917, the Gewehr-Prüfungskommission (GPK) commission launched a program for the development of a new rifle complex. To deal with tanks and aircraft, it was necessary to create a heavy machine gun and a cartridge for it. Subsequently, such a weapon was called MG 18 Tank und Flieger. However, the development of the rifle complex could take a lot of time, and new weapons were required as soon as possible. In this regard, there was a proposal to create a special anti-tank rifle of the simplest design possible, which could be put into production as soon as possible. Despite obvious limitations, even such a temporary solution allowed to obtain positive results.

In November 1917, Mauser received an order to create a promising anti-tank rifle. To accelerate work in the conditions of a lack of resources, the project was given a high priority – the same as the production of submarines. Thanks to this, in January 1918 the first prototype was made, and in May they launched mass production.

The new model was adopted as the Mauser Tankgewehr M1918. Also abbreviated as T-Gewehr.

Rifle with a new bipod. Photo by Wikimedia Commons.

As the basis of the program, a new cartridge with high penetration characteristics was considered. In the early stages of its project, the Mauser studied several similar structures with a bullet of 13 to 15 mm caliber and various characteristics.

The solution was found thanks to the Polte cartridge plant from Magdeburg. It had already created an experimental cartridge with an armor-piercing bullet of 13.2 mm caliber and a 92-mm sleeve with a partially protruding flange. The finished cartridge was adopted under the designation 13.2 mm Tank und Flieger (TuF). 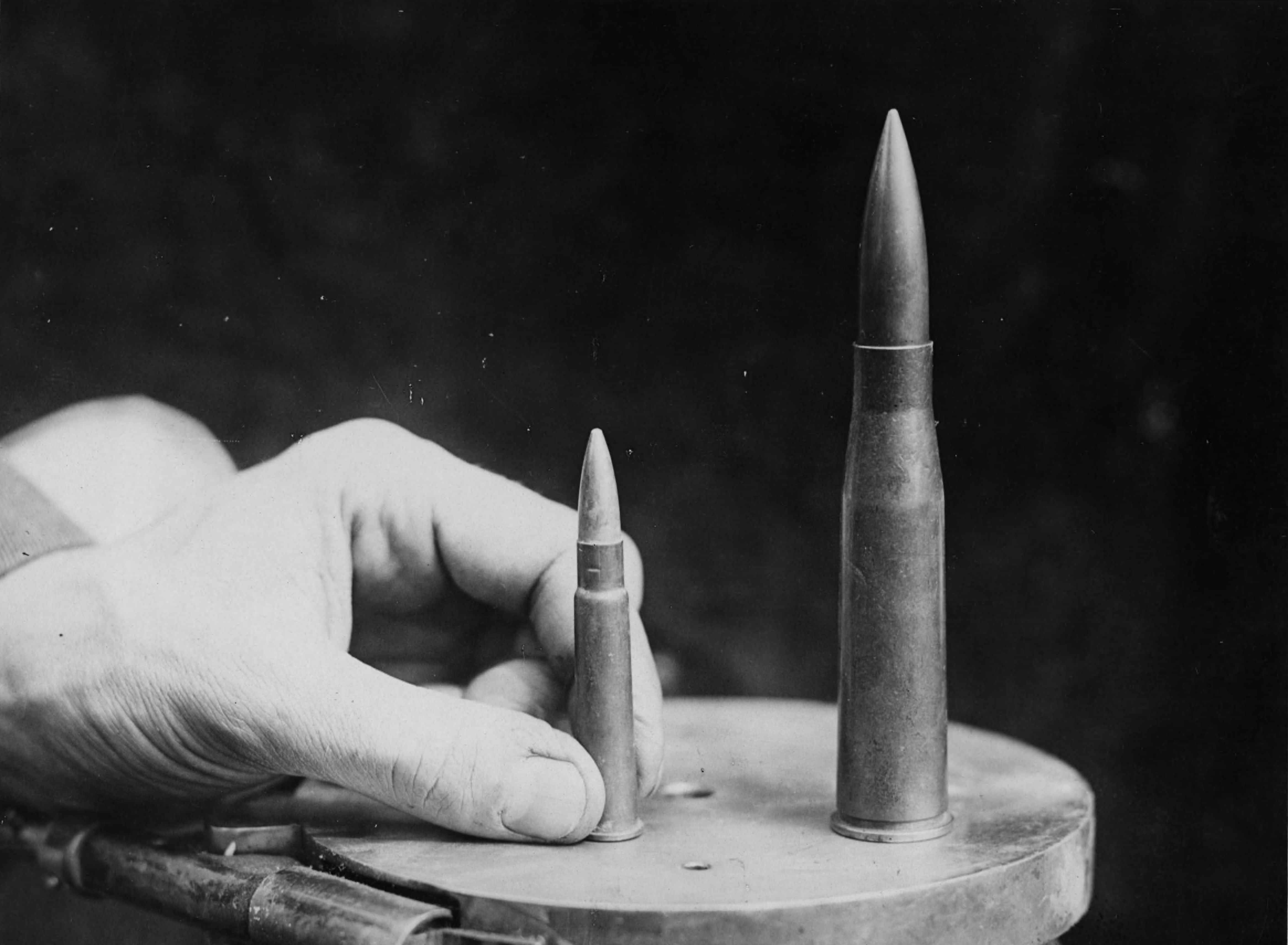 Comparison of a standard .303 British rifle cartridge and a 13.2 mm T-Gewehr cartridge. Photo by Wikimedia Commons.

To speed up the development, they decided to make the new T-Gewehr based on the design of the serial Gewehr 98 rifle, supplemented by some elements from the Gewehr 88. This allowed to obtain the desired result without doing a long and complicated search for technical solutions . However, the original design still had to be scaled for a new cartridge and refined taking into account the difference in energy and improved ergonomics.

T-Gewehr was a single-shot large-caliber rifle with a sliding bolt. The barrel with a reinforced receiver and the simplest trigger was fixed on a wooden bedding. There was no place for ammunition cartridges; it was proposed to supply them through a window for ejecting cartridges. 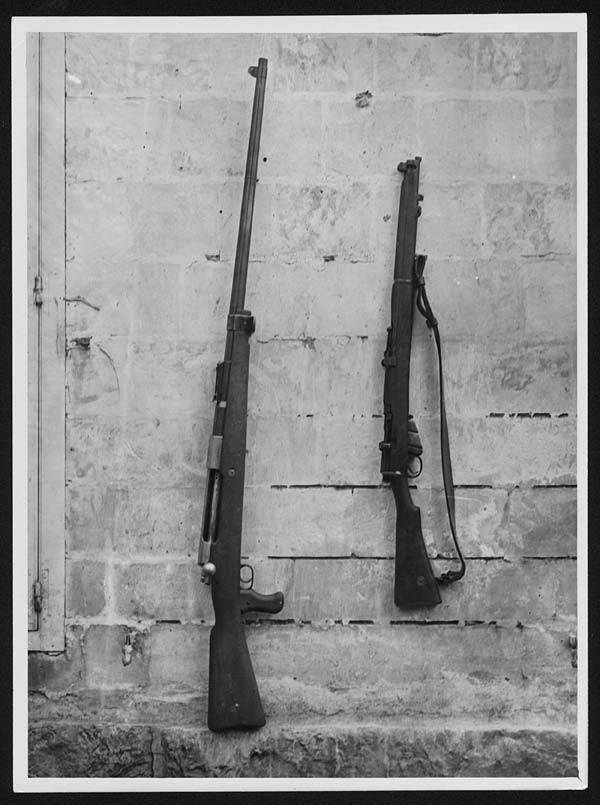 Experienced rifles and the first 300 serial ones received a rifled barrel with a length of 861 mm (65 klb) with relatively thick walls. Later, thinner trunks with a length of 960 mm (73 klb) were produced. They allowed to reduce the total mass of the rifle, as well as slightly improve combat qualities.

Anti-tank rifle received a shutter made on the basis of the decisions of the Gew.88 and Gew.98 projects. Its main part was distinguished by its large size and corresponding mass. The locking was carried out by two pairs of combat stops in the front and rear parts of the shutter. As before, in the back there was a fuse  that blocked the movement of the hammer. In case of a breakthrough of gases from the shell, three holes were provided in the shutter — through them, gases from the hammer channel were discharged to the outside. The first 300 rifles retained the sight from Gew.98, marked up to 2000 m. Next, a new open sight was used with markings from 100 to 500 m. Effective shooting at tanks with 500 meters or more was excluded. Moreover, most modern enemy armored vehicles could be hit with only 300 m.

A small part of the rifles received a solid wooden bed. Most were equipped with glued bedding with attached bottom of the stock. The reinforced bed had a too thick neck, which is why a pistol grip appeared under it. 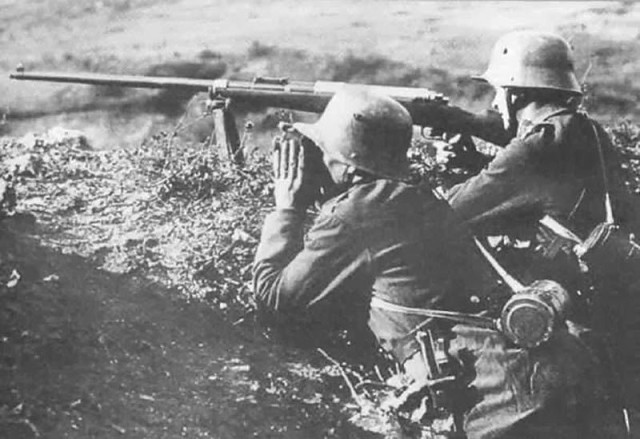 Crew Tankgewehr on the position. Photo by Armedconflicts.com Расчет Tankgewehr на позиции.T-Gewehr of the first issues were equipped with a bipod from the MG 08/15 machine gun. It was not too comfortable and later gave way to a new one, designed specifically for T-Gewehr. The standard mount for the bipod on the bed made it possible to put the rifle on all installations compatible with a light machine gun. The troops often improvised and put the rifle at other bases, including trophy.

Depending on the barrel, the T-Gewehr M1918 had a length of not more than 1680 mm. Late rifles with a long barrel without a cartridge and a bipod weighed around 15.7 kg.

Tankgewehr M1918 on the battlefields

Already in the early summer of 1918, the first serial production rifles of the new model went to units on the Western Front, where the Entente actively used tanks. Serial production was launched at the Neckar factory in Obendorf. Quite quickly, the enterprise reached the highest production rates. 300 rifles were produced daily. Until the end of the war approx. 16 thousand of such products were produced.

The weapons were transferred to infantry regiments, where special rifle divisions were formed. Each regiment was supposed to have only 2-3 anti-tank rifles, however, the proposed tactics of use made it possible to realize the potential of weapons even with a small number. 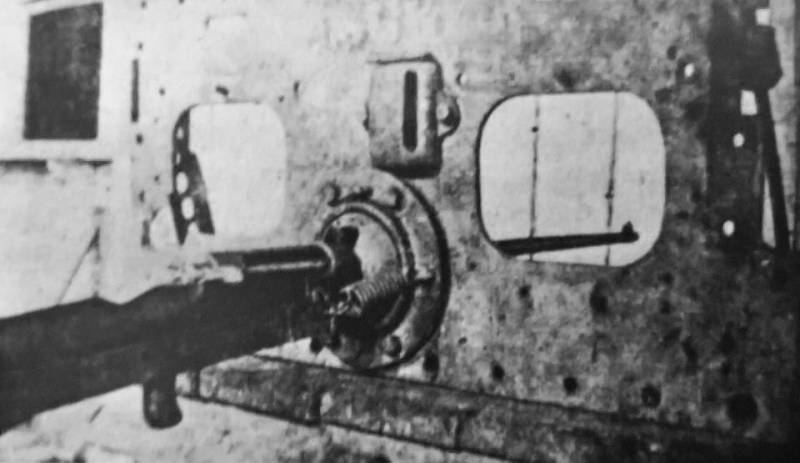 Anti-tank rifle on the machine gun mount of the captured Mark IV tank. Photo by Tanks-encyclopedia.com.

The crew of the rifle consisted of two people – the shooter and assistant. In connection with the specifics of the combat work, the rifles were trusted to the most brave fighters who were able to let the tank get at 250-300 m close and shoot it in cold blood. Wearable ammunition included 132 rounds of 13.2 mm TuF. The gunner had a bag of 20 cartridges, the rest was carried by the second number.

The main tactic of using T-Gewehr was to focus on tank hazardous areas. The shooters had to fire at the approaching tanks, trying to damage vital units or injure the crew. In this they were helped by fighters with regular SmK rifles and bullets.

13.2 mm bullets could penetrate the armor of the tank and cause damage to units or people. The cracking of the armor and the destruction of rivets were also observed, causing a stream of fragments without direct penetration. The simultaneous use of anti-tank rifles and rifles increased the chances of incapacitating the tank.

It should be noted that the rifle from the Mauser did not differ in convenience and ease of operation, which affected the combat use. The rifle had no means of reducing recoil. To avoid injuries, the shooters had to change after several shots. However, even in this case, there were headaches, temporary hearing loss and even dislocations. That Tankgewehr was the reason for the appearance of jokes about weapons, from which you can shoot only two times – according to the number of healthy shoulders. 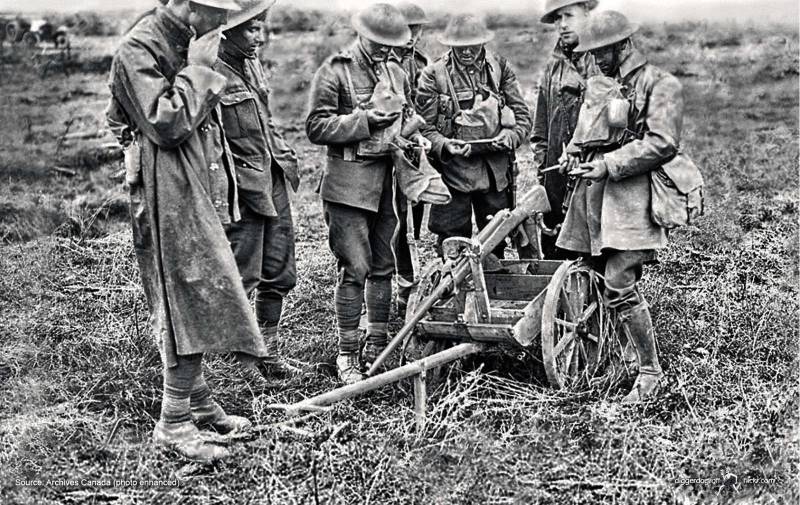 Canadian soldiers are studying a German anti-tank rifle on a wheeled machine. Photo by Archives Canada.

In general, the Mauser Tankgewehr M1918 anti-tank rifle has established itself as a fairly effective, but difficult to use weapon. It significantly strengthened the defense of the German troops and caused damage to the enemy. The exact losses of the Entente from the fire of anti-tank rifles are unknown. However, they were sufficient to stimulate the development of armored vehicles and crew protection equipment.

The period of active use of the T-Gewehr anti-tank rifle lasted only a few months – until the ceasefire. During this time, part of the issued rifles was lost or decommissioned, but the army had at its disposal significant stockpiles of weapons. Soon the Treaty of Versailles determined their future fate.

Under the terms of the peace treaty, Germany was forbidden to have anti-tank rifles in service. The accumulated stocks of M1918 products were seized as reparations and shared between several countries. Part of the rifles soon hit the secondary market. So, Belgium received several thousand anti-tank weapons, and then sold a significant part of them to China.

German anti-tank rifles dispersed in many countries and underwent careful study. Attempts were made to copy and refine the existing design – with different results and successes. Their main result was an understanding of the fundamental possibility of creating a relatively light anti-tank system for infantry. Soon, this concept was developed, as a result of which new variants of anti-tank rifles appeared.

It should be recalled that the Mauser Tankgewehr rifle was developed as a temporary measure in anticipation of a heavy machine gun. The latter was able to create and even released an extremely small series, but it was the “temporary” rifle that was widely used. Moreover, it became the first model of a new class and led to the emergence of a mass of new weapons of a similar purpose.

In 1999, a Soviet abandoned tank dating back to World War II (WW2) was found in a swamp in northeast Estonia. The tank was raised ... Read More

In 1999, a Soviet abandoned tank dating back to World War II (WW2) was found in a swamp in northeast Estonia. The tank was raised ... Read More