MG-42 (Maschinengewehr 42) is a German machine gun, developed by Metall- und Lackwarenfabrik Johannes Großfuß in 1942. Deservedly considered one of the best machine guns of the Second World War.

At the beginning of World War II, the Wehrmacht army was armed with a machine gun created in the early 1930s – MG-34. With all its advantages, it had two serious drawbacks: first, it was quite sensitive to contamination of mechanisms; secondly, it was too laborious and expensive to manufacture, which did not allow to satisfy the ever-growing needs of the troops for machine guns. The machine gun was adopted by the Wehrmacht in 1942, and put into production at the Grossfus company itself, as well as at the Mauser-Werke, Gustloff-Werke factories and others. Production of the MG-42 continued in Germany until the end of World War II, and a total of about 400,000 machine guns were produced. At the same time, the production of the MG-34, despite its shortcomings, was not completely ceased, since, due to some design features, it was more suitable for installation on tanks and combat vehicles. 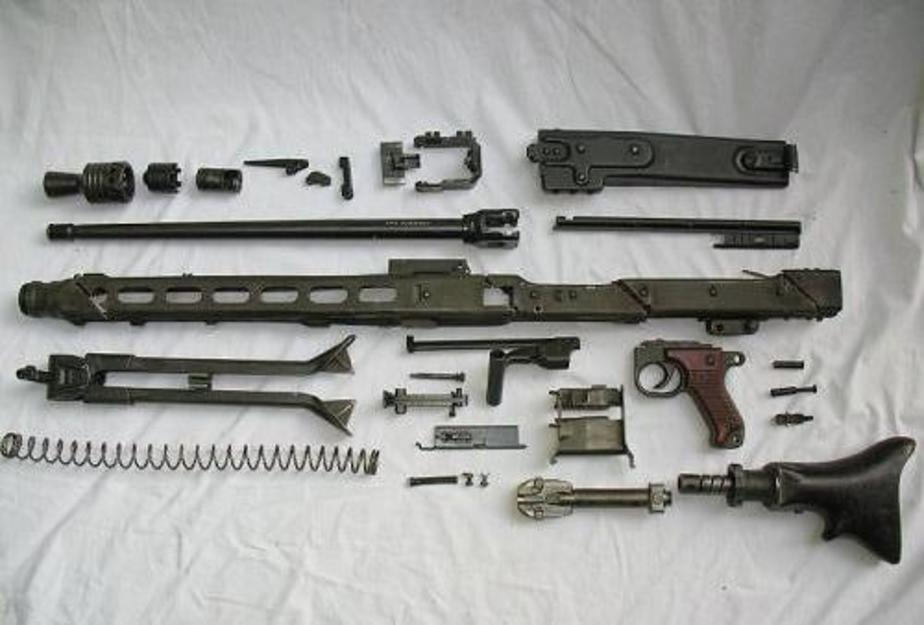 The high rate of fire of the machine gun led to the widespread use of the MG-42 as a light air defense system for infantry, as well as an anti-aircraft machine gun for armored vehicles. On the basis of MG-42, several anti-aircraft installations were created from several machine guns fastened together. 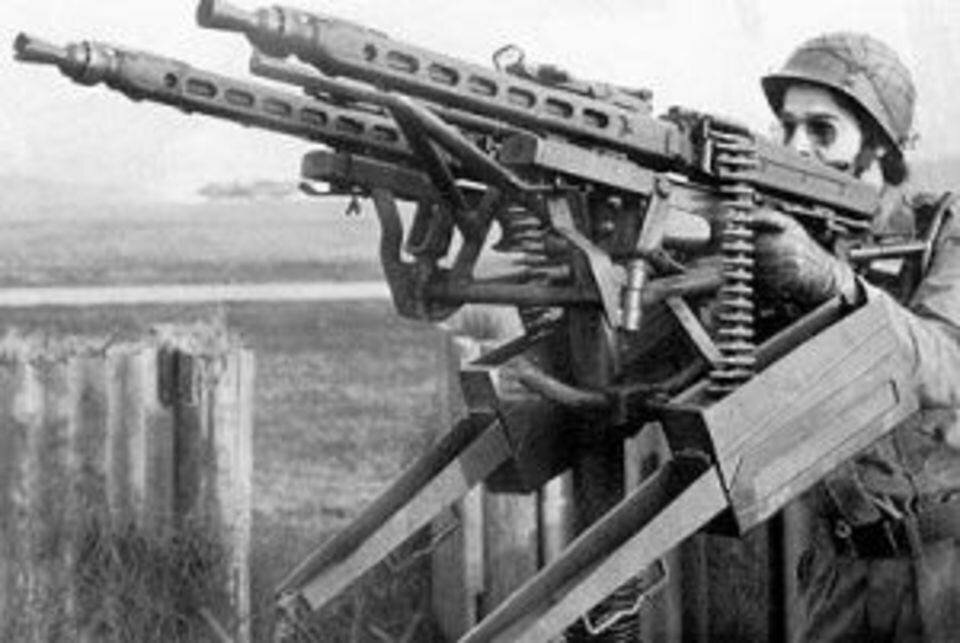 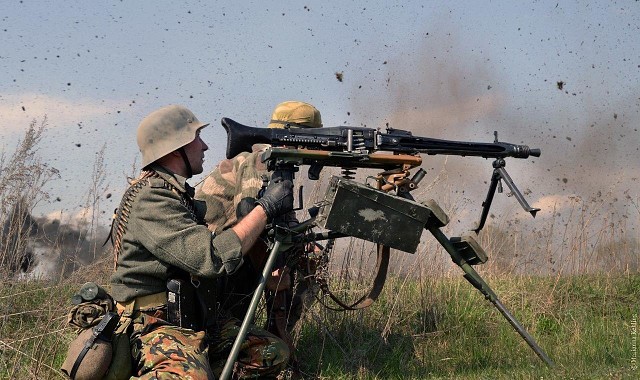 At the end of the war, the MG-42 was recognized as one of the best machine guns of the Second World War. Since the late 1950s, Germany has been adopting the MG-42 variants, with modifications for the 7.62 × 51 mm cartridge, first under the designation MG-42/59, and later – MG-3.

The same machine gun is in service in Italy, Pakistan (in production), and in a number of other countries. In Yugoslavia, a copy of the MG-42 under the name Zastava M-53 was in service until 1999 in a version chambered for the initial cartridge 7.92 × 57 mm. Switzerland adopted a variant of the MG-51 machine gun under its 7.5 × 55 mm cartridge in 1951, and a few years later “SIG Sauer” company developed several commercial (export) versions on its basis for 6.5 × 55 mm and 7 cartridges. 92 × 57 mm, but a lighter analogue of the Rheinmetall MG-3 – SIG MG 710-3 – went into production. 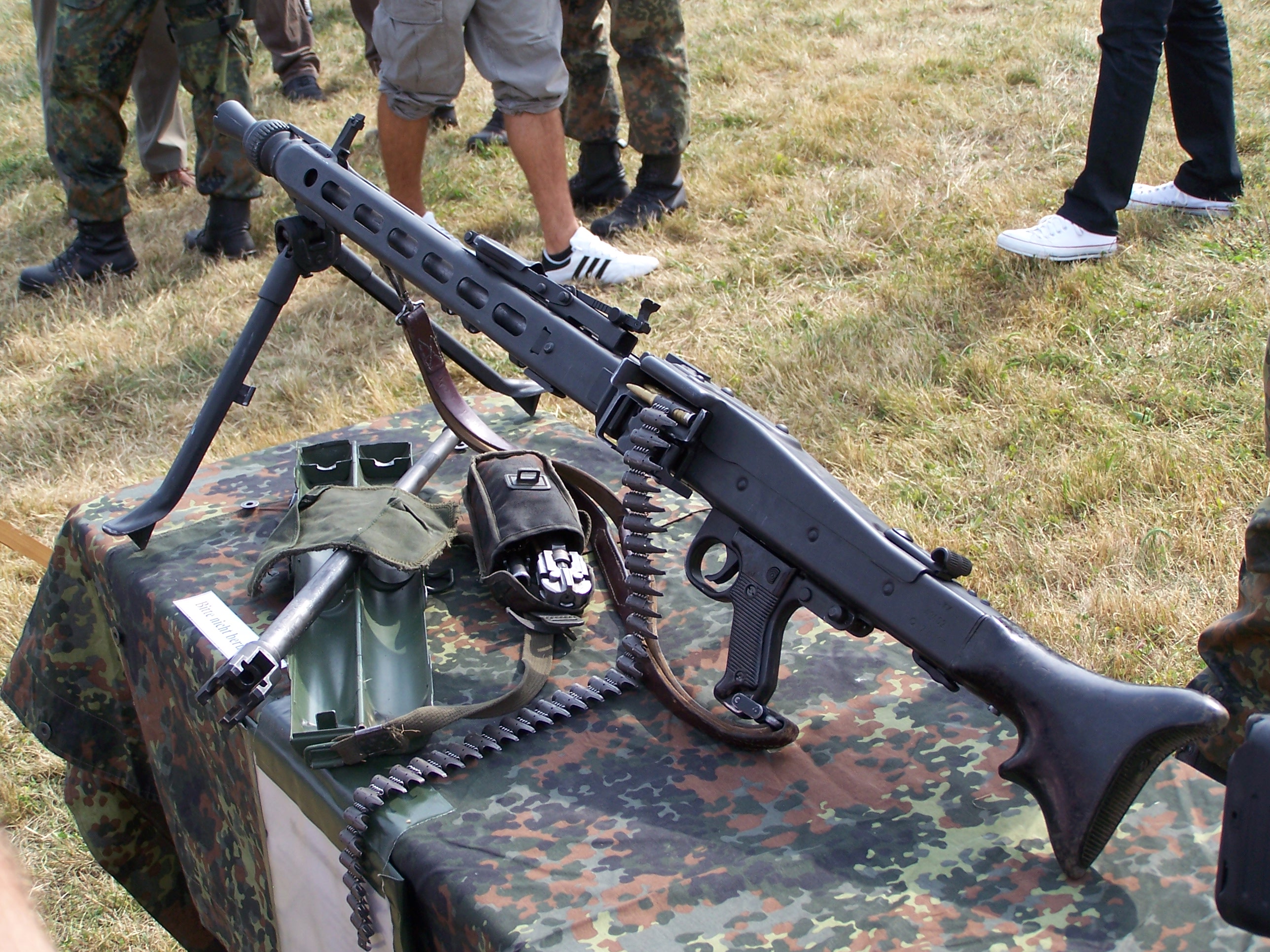 MG-3 (Maschinengewehr 3) – German machine gun, which is an improved version of the MG 42 machine gun. Photo by Wikipedia

MG-42 was the main German machine gun of the final stage of World War II. This weapon was known for its reliability, unpretentiousness and durability. We can confidently say that in this case, the simplification of the design only went to the benefit of the weapon.

In addition to the general simplification, many changes were made to the design of the machine gun due to the experience of using the MG-34. The gaps between the parts were increased, which made the weapon more reliable; new parts made it possible to work with a machine gun in winter gloves. 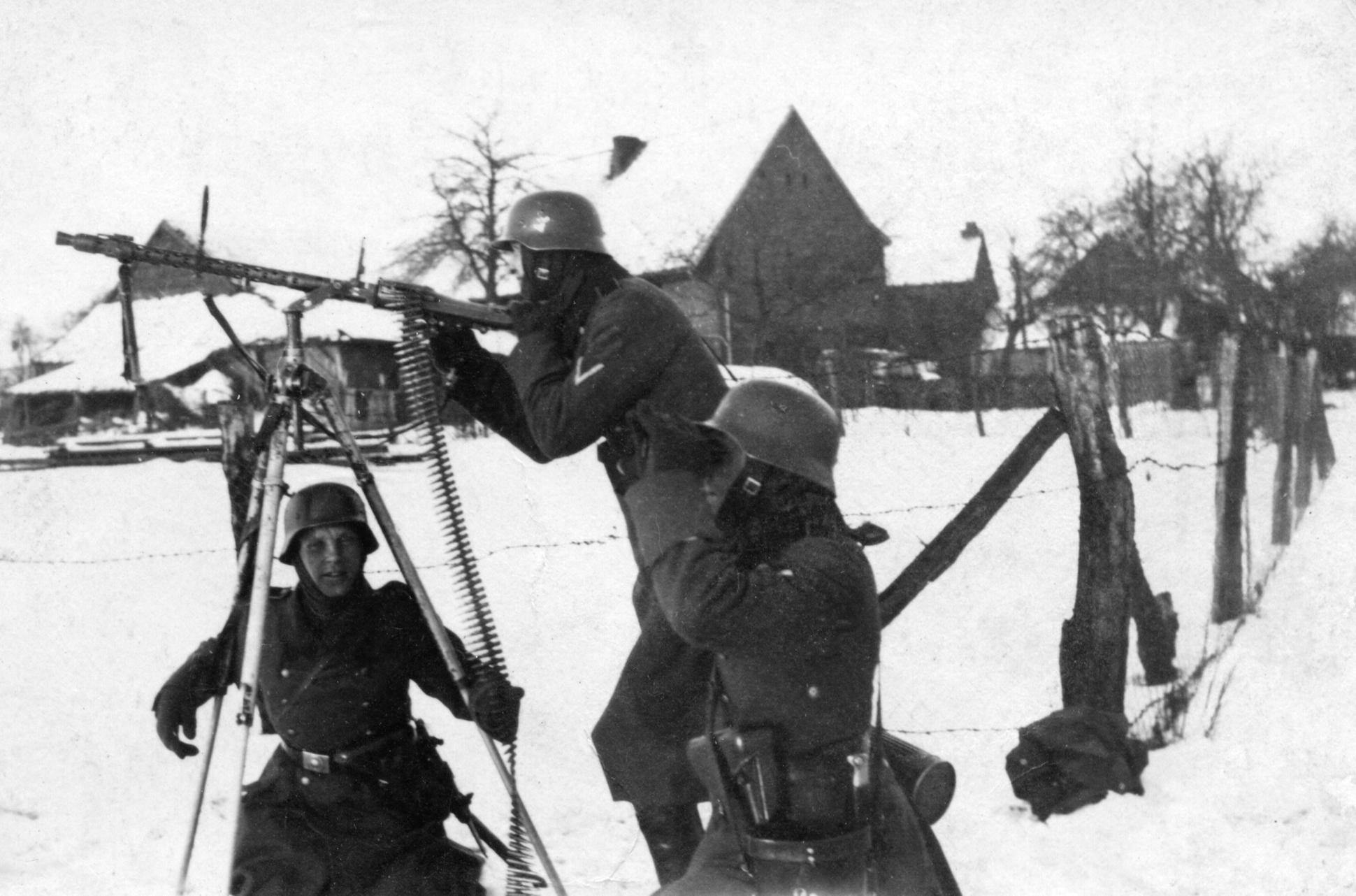 It was inconvenient to shoot from the MG-34 in winter gloves. This often led to frostbite of the soldier’s fingers.

The MG-42 was less demanding on the quality of the lubricant, its disassembly and maintenance were easier. Germany prepared a huge number of machine gunners for its armed forces (by the end of the war, their number was more than 400 thousand people). However, the main feature of this weapon was its rate of fire. The machine gun could produce from 1200 to 1500 rounds per minute. Although the dispersion at this high rate of fire is quite significant, it is not critical. The vibration and recoil of the MG-42 does not interfere with its handling and does not cause any particular complaints.

As a rule, the calculation of the machine gun consisted of the first and second numbers, a shooter was also attached to them, as well as an ammunition carrier. It should be noted that the German field tactics of that time was largely built around a single machine gun. If the Americans and the British put the rifleman at the forefront, then in Germany the machine gunner was in charge. In the German army, the number of machine guns was maximum, most of which were precisely the MG-42.
The MG-42 crew could make a solid fire barrier through which the attackers simply could not break through. This leaden rain was interrupted only during the barrel change. American and British soldiers were specially trained to hide from MG-42 firing and to advance during barrel replacement. The psychological impact of firing this machine gun on enemy soldiers was very great. The Americans released a special training film on how to deal with shock after being under fire from MG-42. 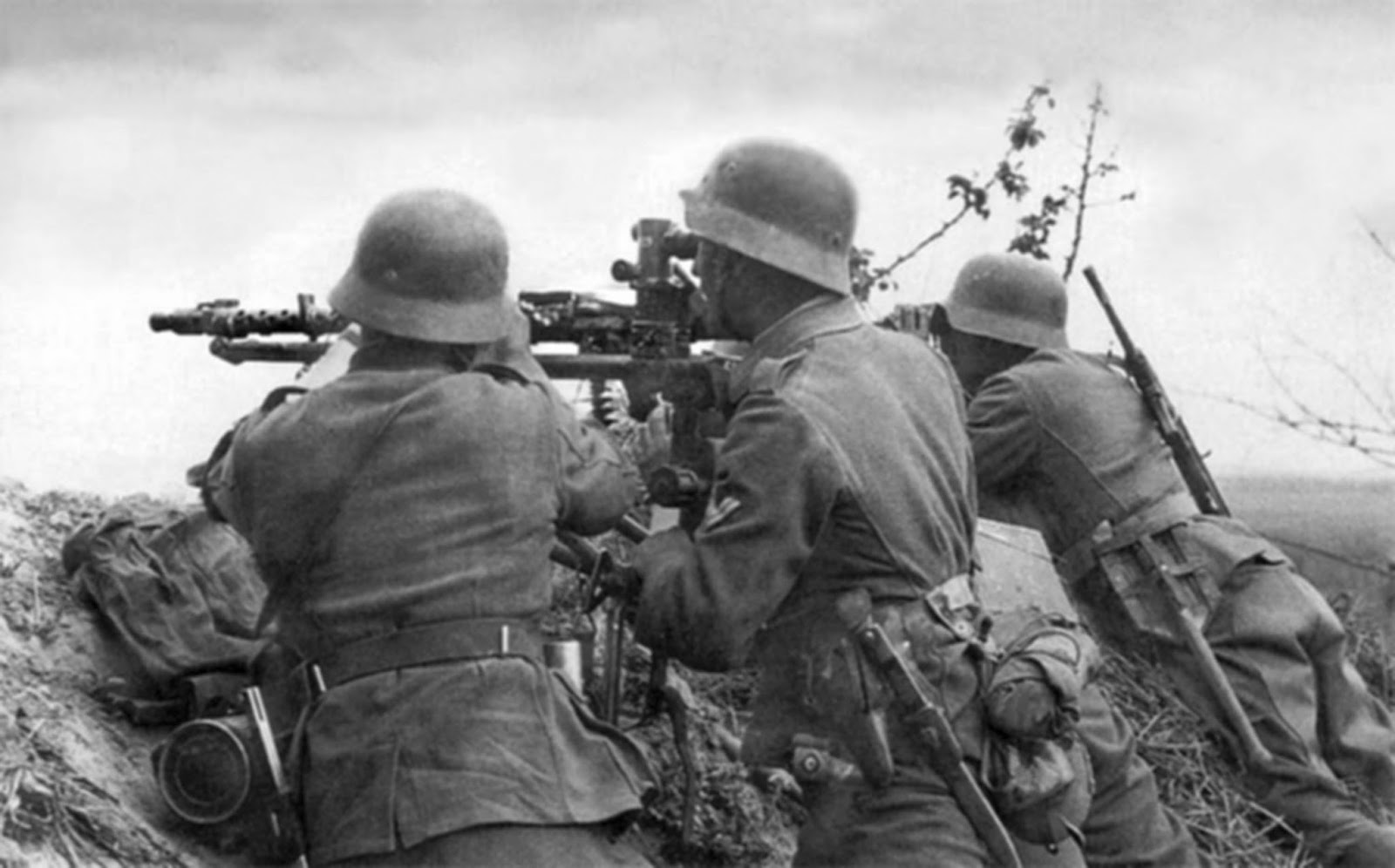 The Americans and the British called this machine gun “Hitler’s buzzsaw”, and the Soviets called it the “lawn mower”, “widowmaker” and “bone cutter”. Based on these names, one can imagine its killer effectiveness. The characteristic growling sound of the operation of this weapon brought real terror to the enemy soldiers.
MG-42 could not conduct single fire, and for a machine gunner a good indicator was the ability to shoot bursts of three to five rounds. The German army had strict regulations on how to fire the MG-42. It was forbidden to release more than 250 cartridges in one turn, the optimal rate of fire was 300-350 rounds per minute. Such instructions were introduced to reduce barrel wear and increase weapon accuracy. 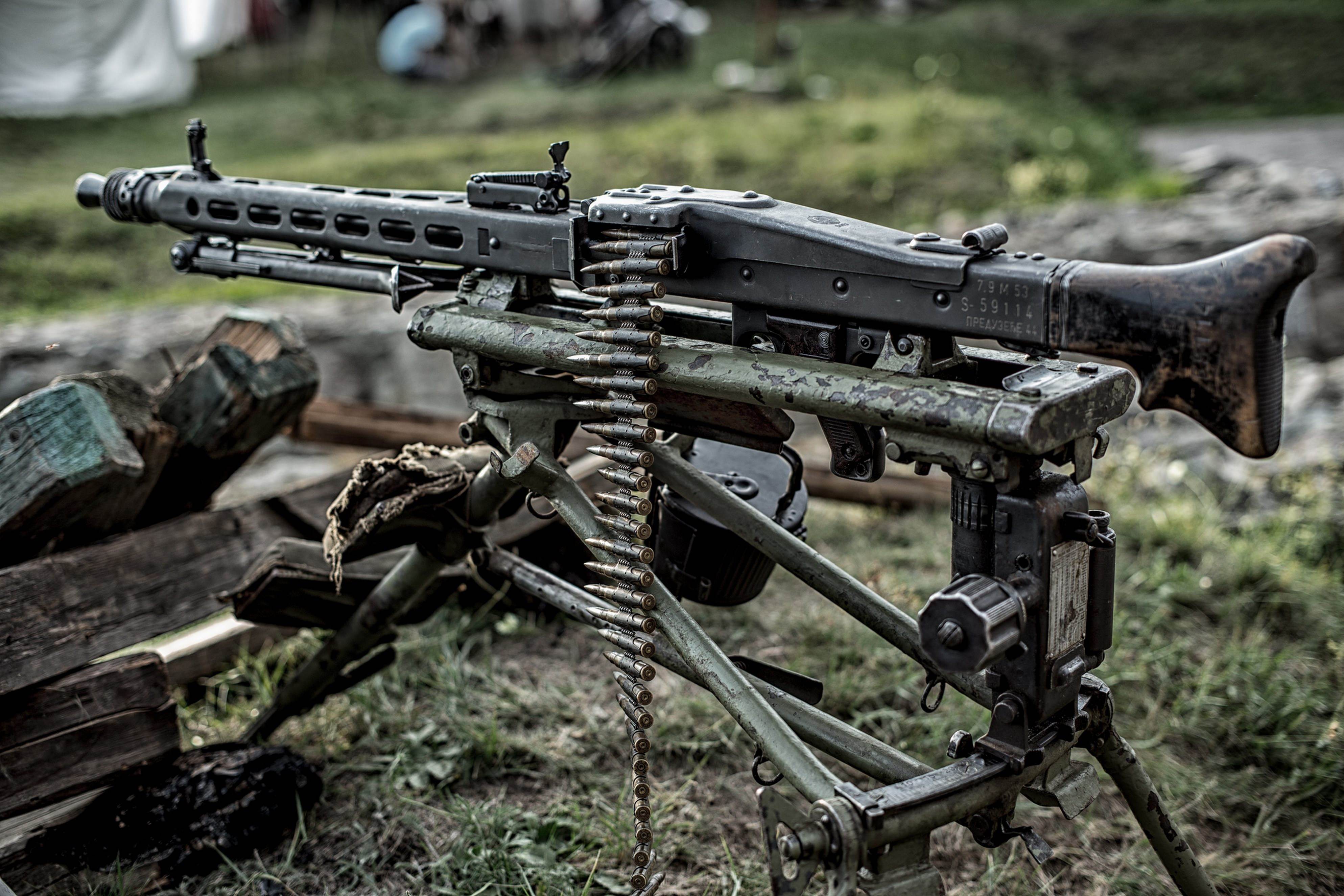 Summing up the above, we can conclude that the MG-42 is indeed the best machine gun of the Second World War. The MG-42 has proven its reliability in the sands of North Africa and in the snows of the Eastern Front.