The revolver of the “Nagant” M1895 system became a legendary gun of both the First and the World War II. In 1994 it celebrated its 100th anniversary of service. After going through the First World War, the Civil War in Tsarist Russia, the Soviet-Finnish War, the World War II and the Russo-Japanese War (all this time, it was the Nagant M1895 that was in service with the Red Army), it continues to serve as a service weapon. Some called it the best World War 2 gun.

Also, the Nagant is a welcome find and relic of the WW2 for collectors from all over the world.

The revolver of the Nagant system has forever entered the history of many countries. Its name has become a household name, applied to any combat revolver, and sometimes a self-loading pistol. For many people, along with cold steel, it is associated with the revolutionary movement of 1917 in Tsarist Russia. Then there was the First World War, then the Finnish War, then the Nagan as a weapon used in WW2 became the symbol and the main weapon of the officers of the Red Army, and the Nagan has always served faithfully.

There are many reasons for such popularity, however, according to military experts, the main ones are design reliability and effectiveness for close combat. More than 2,000,000 copies were issued in Russia alone. Until the beginning of the 50s, this Weapon was in service with the army and the police, until recently it was used by collectors, and many pistols are two, and sometimes three times older than their current owners. 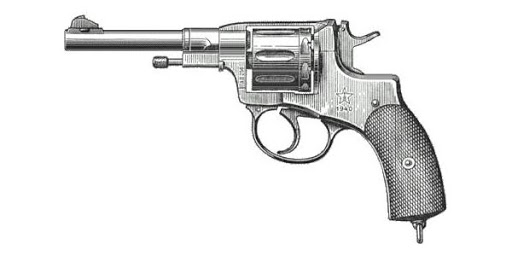 It was the model of the Nagant M1895 system that became a legend. All subsequent modifications did not significantly change the design. In addition to combat, it found peaceful use – on its basis, a sports and signal revolver was developed.

The history of the creation and development of the revolver Nagant

The history of the weapon that was used in the two world wars and the civil revolution begins in Belgium, the city of Liege, in a small family arms workshop of the Nagant brothers. It was here that Emil, the eldest of the brothers, developed and then patented a drawing of a multiply-charged combat revolver of his own design.

At the end of the 19th century, many countries faced the problem of rearmament of their armies. The most promising for that time were considered to be short-barreled fire revolvers. 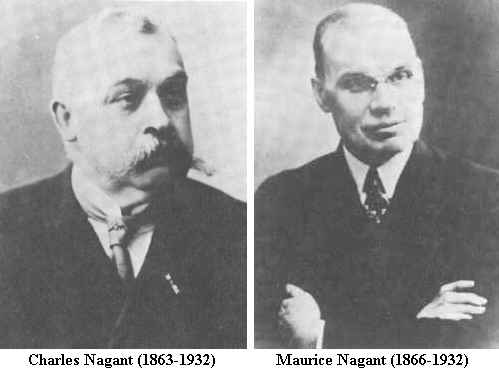 Since the weapon invented by the Belgians met the necessary requirements, the pistol was put into service under the name “Nagant M1877 Revolver”. Positive feedback from army officers (including the Red Army) contributed to the acquisition of the world famous Nagant product and brand. Until the mid-1890s, in various modifications (Nagant M1884, M1887, M1993), a slightly revised and improved revolver was soon adopted by Norway, Sweden, Belgium, Brazil and Luxembourg.

Russia, too, tried to follow global trends and prospects in the field of military weapons. So, in 1879, a trial batch of seven-shot revolvers in a thousand pieces was ordered for the Russian Maritime Ministry.

Improvement work was carried out constantly. In 1892, a model appeared, which embodied the best characteristics of the previously developed ones: a six-round weapon, a 7.62 mm revolver caliber, a new double mechanism, which was cocked both automatically and by hand before firing. With all modifications of the revolver, this mechanism was practically not subjected to serious modifications. 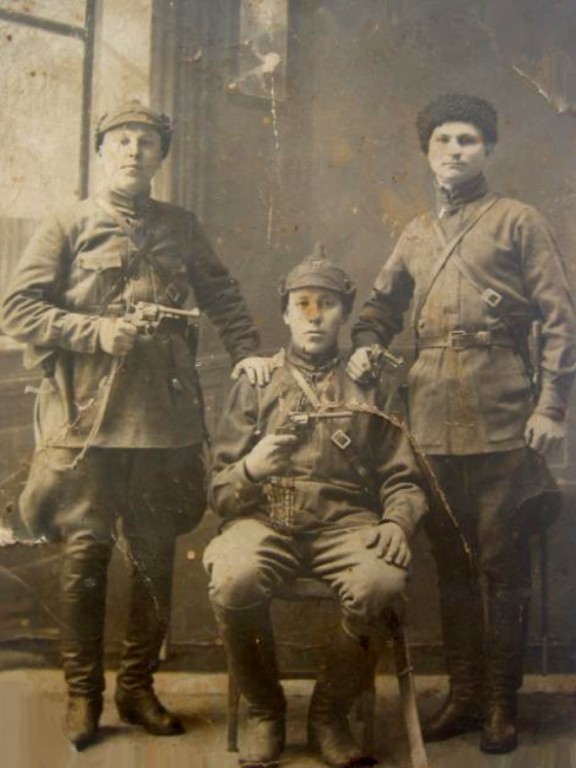 Soldiers of the Russian tsarist army with a revolver Nagant

During 1893 – 1894, Nagant consistently developed several improved models of his weapons, in which almost all the shortcomings of the 1892 revolver were eliminated.

In 1895, the M1895 Nagant was put into service in Russia. Nagant, feeling that he could make significant profits, adapted his revolver to the requirements of the Russian military. Senior officers of the Red Army received a full-fledged pistol with an automatic platoon. For junior officers, to reduce the cost of manufacturing these weapons, pistols were supplied, which were manually cocked.

Revolver revolver М1895 in service with the Red Army

In 1895, the government of Tsarist Russia concludes a contract with the Nagant Liège firm for the supply of 20,000 Nagant M1895 revolvers to the Russian army over the next three years. At the same time, the contract specifically stipulated the obligation of the Belgian side to provide assistance to Russia in establishing the production of revolvers at the Tula Arms Plant.

Therefore, the very first samples, mainly with a double-action firing mechanism, were purchased directly from the Belgian company of the Nagant brothers in Liege and were intended primarily for arming officers and non-commissioned officers. By 1899, their production in Belgium ceased, and in Russia, its own production of Nagans was launched.

Under Soviet rule, only models with a double (automatic) platoon were in service. Repeatedly the weapon was considered obsolete. They tried to replace it with newer designs, but it continued to be produced and was successfully used in WW2 and during the Russian – Finnish war. Only in the 50s of the XX century, the revolvers were finally removed from the service of the Red Army. But even after that, they were in great demand for a long time in the paramilitary guard, courier service, and among collectors. They also admitted that this is one of the best World War 2 guns. 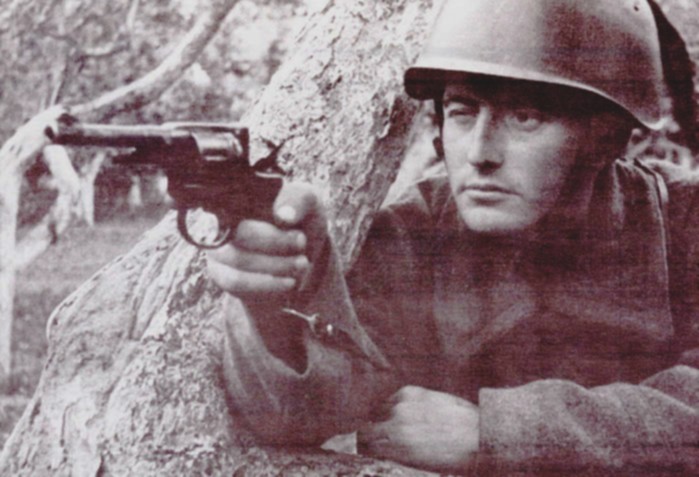 Soviet soldier in a trench with a revolver Nagant М1895

According to experts, the revolver Nagant M1895, stood on a par with the most advanced models of this weapon of that time. It was significantly superior in combat and operational qualities to the Smith-Wesson revolver that was previously in service with Russia. From the point of view of the concepts of that era, it was a typical representative of military weapons – powerful and reliable in operation, but at the same time simple and relatively cheap. 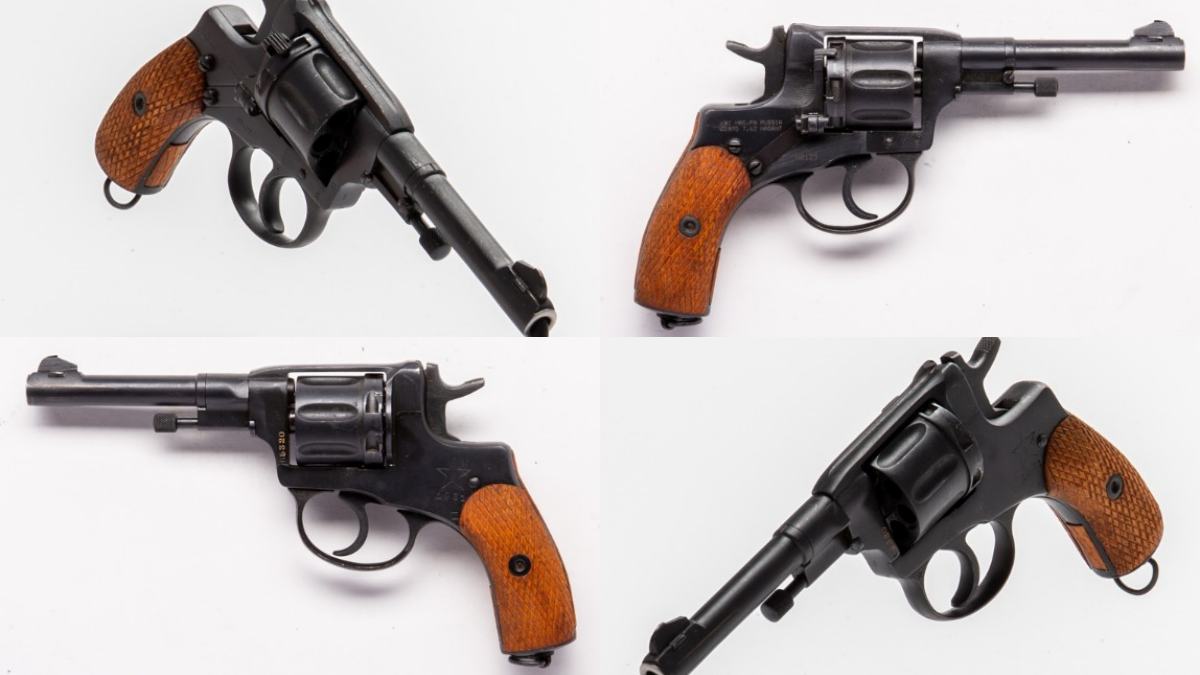 If you look at it with a modern look, then as a weapon, the Nagant M1895 revolver was very bad because:

But for that time, it met all the requirements: it was reliable, had good shooting accuracy, and therefore enjoyed popularity for many years. That`s why it became a famous weapon in the World War 2.

The main modifications of the revolver

In addition, Russian gunsmiths, seeking to expand the functionality of the revolver, in 1912-1913 produced a very limited number of revolvers with a barrel extended up to 300 mm and an integral butt on the order of a separate border guard corps. The new model was supposed to equip equestrian border guards. This weapon, which actually belonged to the class of revolvers-carbines, was intended to engage targets at distances up to 100 m.However, the extremely large dimensions (total length was almost 700 mm), the low lethal effect of a light revolving bullet at firing distances over 50 m, as well as the complexity of reloading served as the main reasons for abandoning this sample.

Revolver carbine for border guards, made on the basis of the revolver Nagant M1895 . Photo by shooting-ua.com

In general, the design of the Nagant M1895 revolver became classic in its time. Along with the widely established production of “Nagans” in Russia, and later in the USSR (for the Red Army), many foreign firms have repeatedly copied its design. So, the Belgian firms Lepage, Bayard, Francott, as well as the German firm in Suhl C.G. Haenel have established production of both direct analogs and several modified Nagant M1895 revolvers. In the 1920s-1930s, the Spanish arms company F. Arizmendi y Goenaga produced a modified revolver Nagant M1895 chambered for 7.5 mm. From 1930 to 1935, under the designation “Nagant Model 30”, it was also produced by the Polish state arsenal in Radom using equipment purchased during the liquidation of the Belgian company of the Nagant brothers in 1930.

In addition to combat and service use, the Nagant revolver of the 1895 model was also used in sports. In pre-revolutionary Russia, no major changes were made for target shooting in the design of revolvers. At the competition, a standard revolver with a non-self-cocking trigger was used, which was distinguished by high stability and accuracy of the battle.

This is a collection of photos of American soldiers of the Second World War, who returned from the front line after a week of fighting ... Read More