Dear reader, in this article you can learn about the Wehrmacht army’s jet mortar – Nebelwerfer. In the Red Army, this mortar had the nickname “Vanyusha”, and was considered the antagonist of the Soviet multiple launch rocket system “Katyusha”.

“Nebelwerfer” (smoke mortar) is a German jet mortar during the Second World War. According to Soviet post-war historiography, the Nebelwerfer emerged as a Nazi-copied weapon, the German industry’s response to Soviet “Katyusha” multiple rocket launchers. In fact, the Nebelwerfer, like the “Katyusha”, were rocket-propelled mortars originally designed for the use of chemical weapons.

The literal translation of the name from the German “Fog thrower” suggests that the original gun was supposed to be used as a mortar to create chemical and smoke screens. During the hostilities, chemical shells for these weapons were also captured, confirming its original purpose. However, in fact, during the Second World War, it was used for firing high-explosive fragmentation mines. In the states of military equipment of the Wehrmacht passed under the name “rocket cannon”. 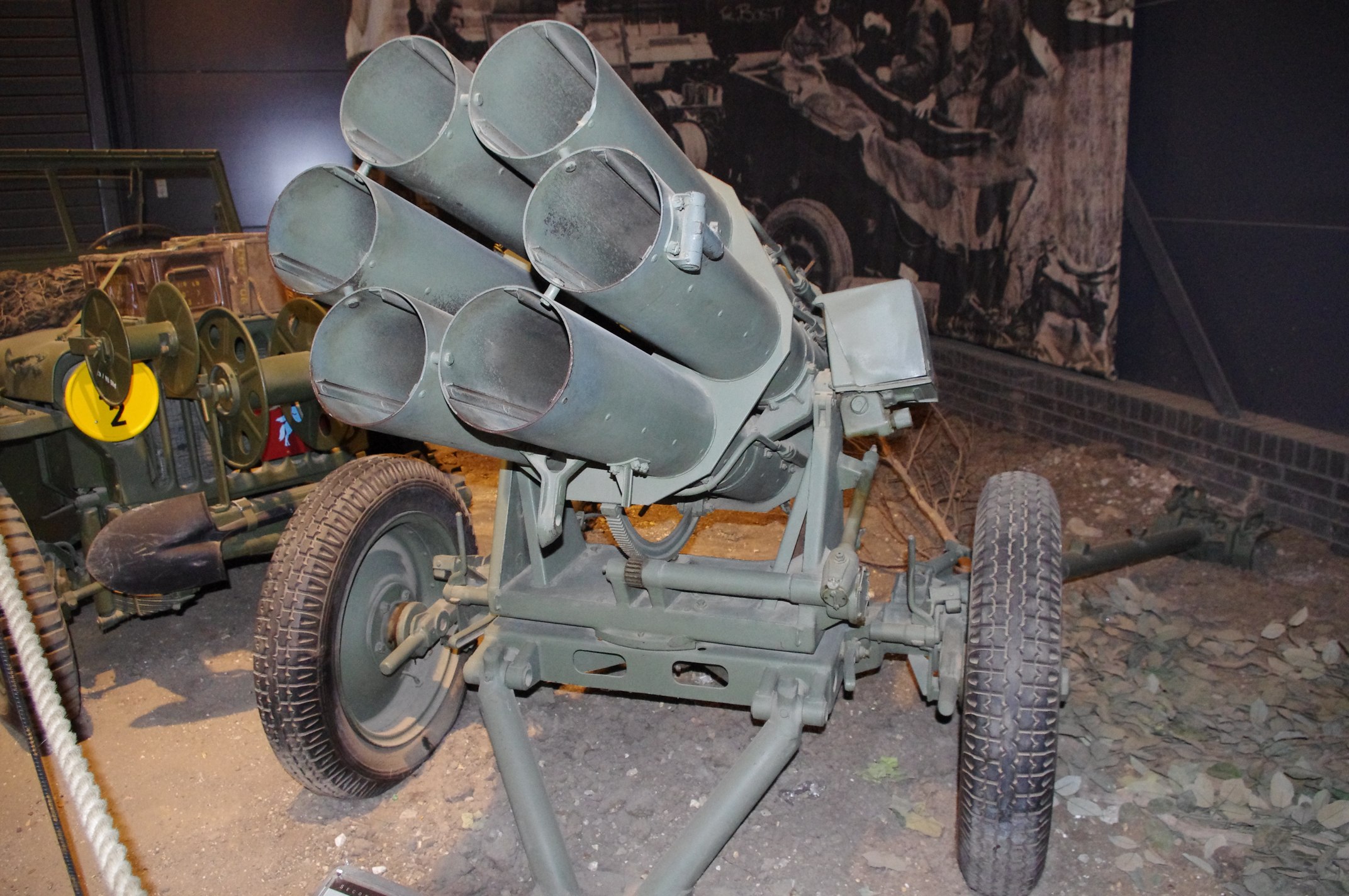 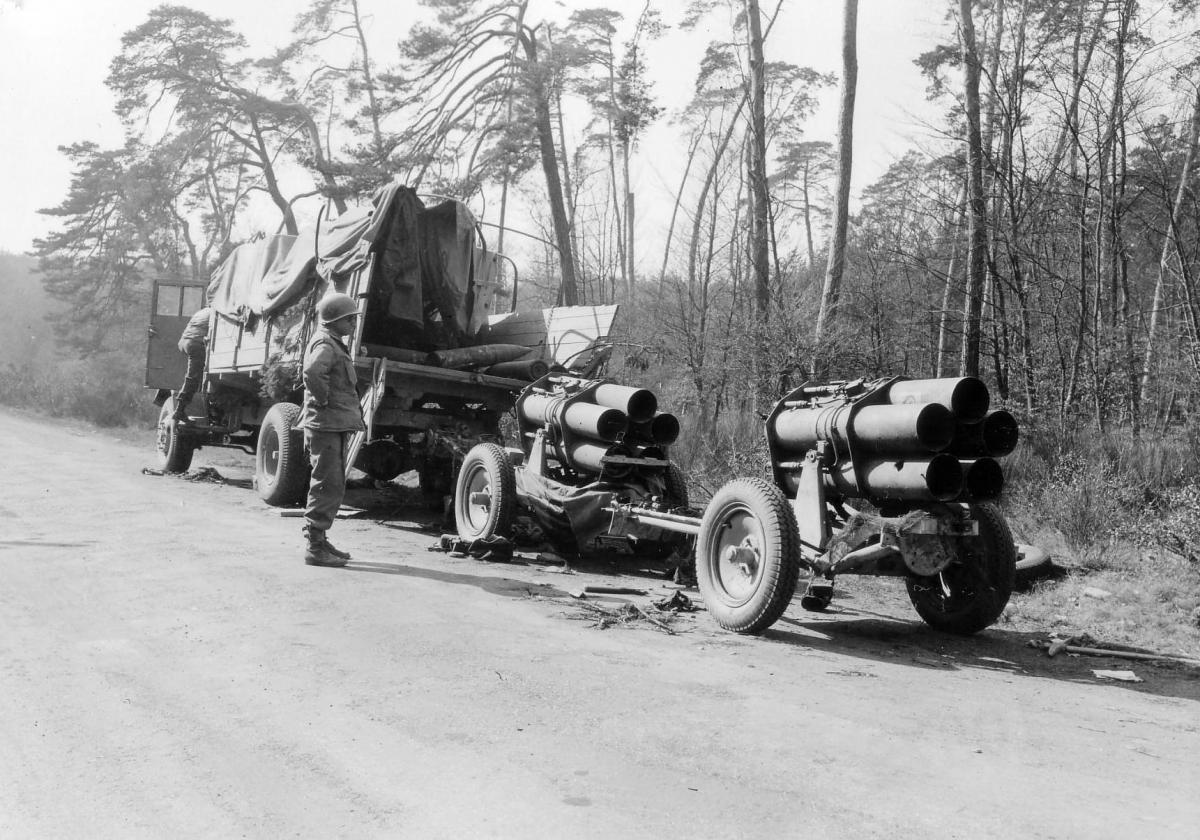 It is worth noting the fact that from 1940 to 1943, the Wehrmacht successfully used a self-propelled version of the multiple launch rocket system. But it refers not to the “Nebelwerfer”, but to the “Wurfrahmen 40” (installed on the standard armored personnel carrier “SdKfz 251/1”). Three frames were attached to each side of it and carried five 280 mm rocket mines and one 320 mm incendiary mine. 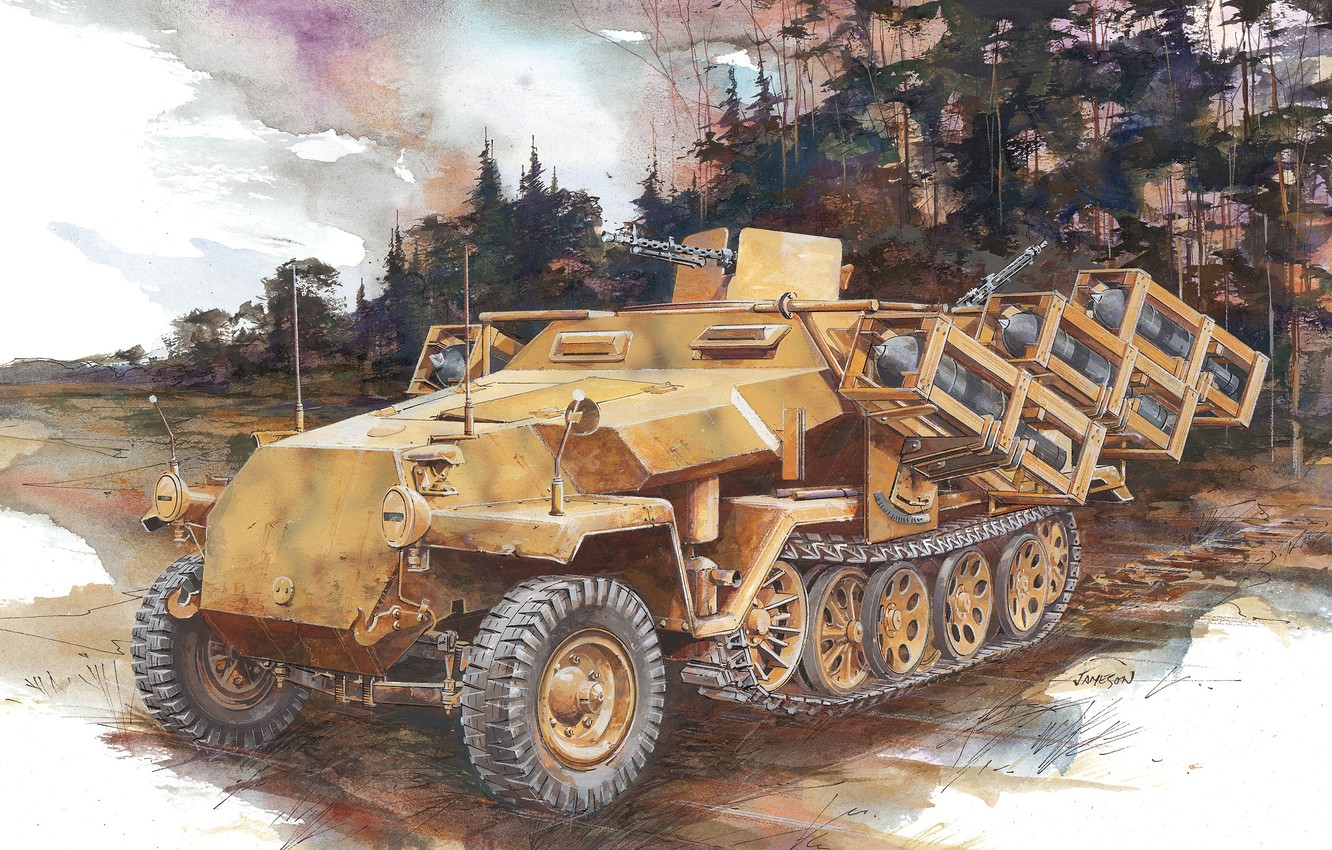 Design of rockets for the Nebelwerfer

The rocket mortar ammunition is a 158 mm cylinder. The weight of the entire rocket is 39 kg, of which up to 2 kg goes to explosive (TNT). The entire cylinder is filled with a slowly burning di-glycol gunpowder. The downside of such projectiles was the powerful smoke of the projectile route, unmasking the firing position. At the back of the cylinder there are several nozzles tilted 14 degrees off the axis. There are 28 nozzles in total. They impart a rotation around its axis to the mine in flight, which achieves high accuracy of the projectile (dispersion at a distance of 6000 m: in range – 80-100 m, lateral – 60-90 m). The manufacture of such shells was record-breaking cheap and did not require special equipment.

At the end of the cylinder, a small container is attached as a warhead, which is filled with explosives. The channel of the main nozzle of the engine passes through it, providing the mine with translational motion. There is also an inertial shock detonator. 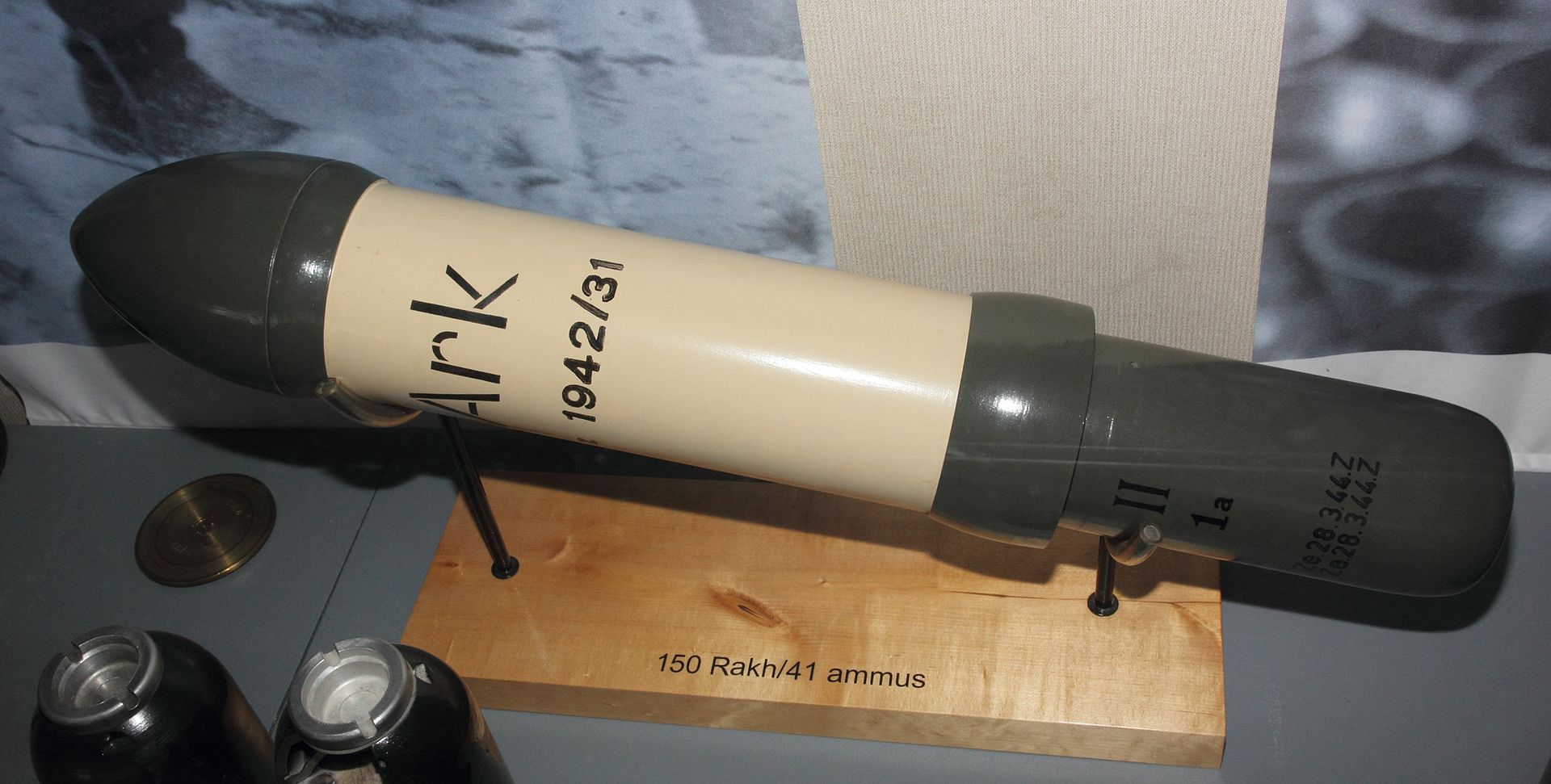 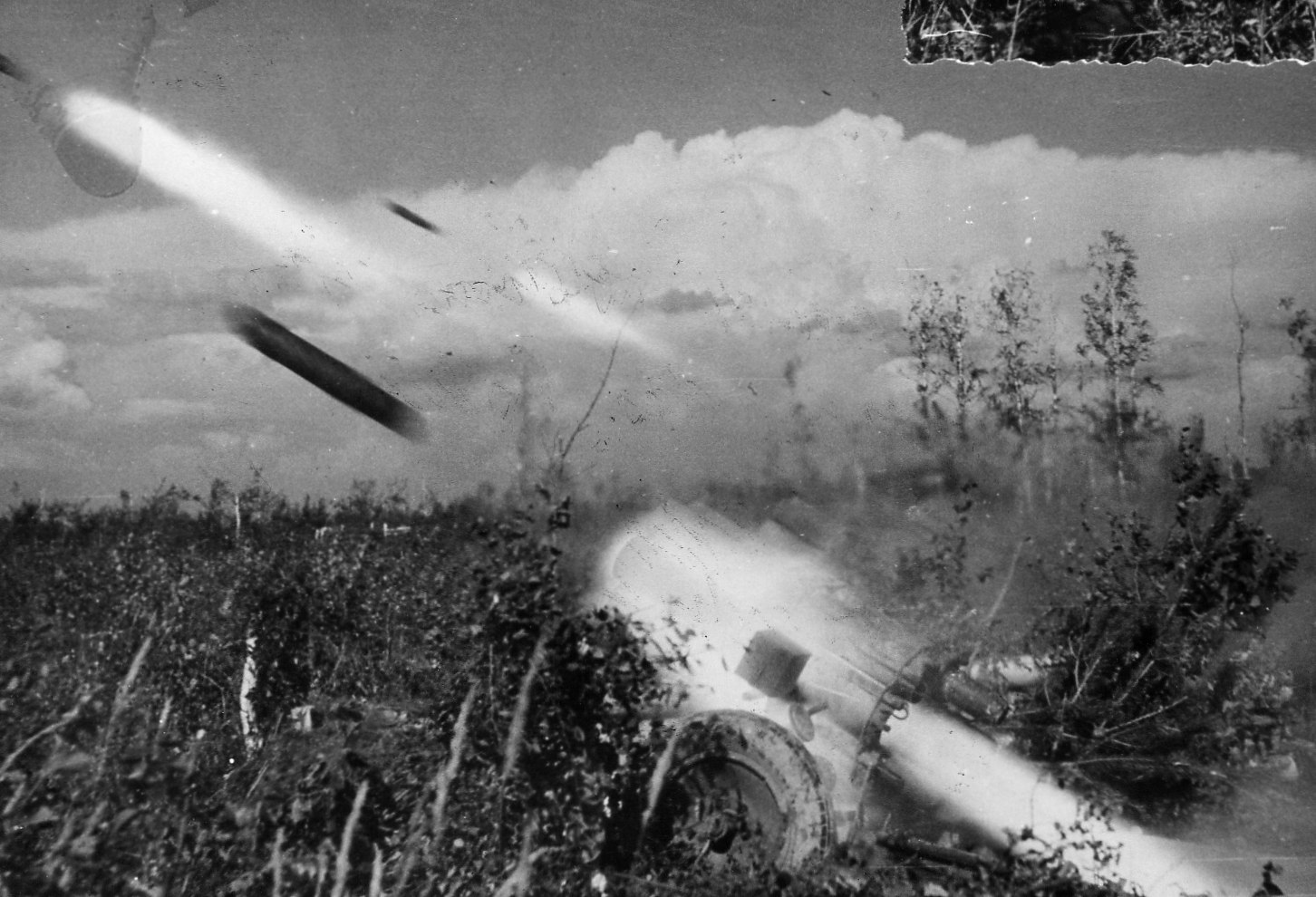 The photo shows shots from the Nebelwerfer.

“Nebelwerfer” had 5 types of jet mines designed for a wide range of tasks.

There were the following types of jet mines: 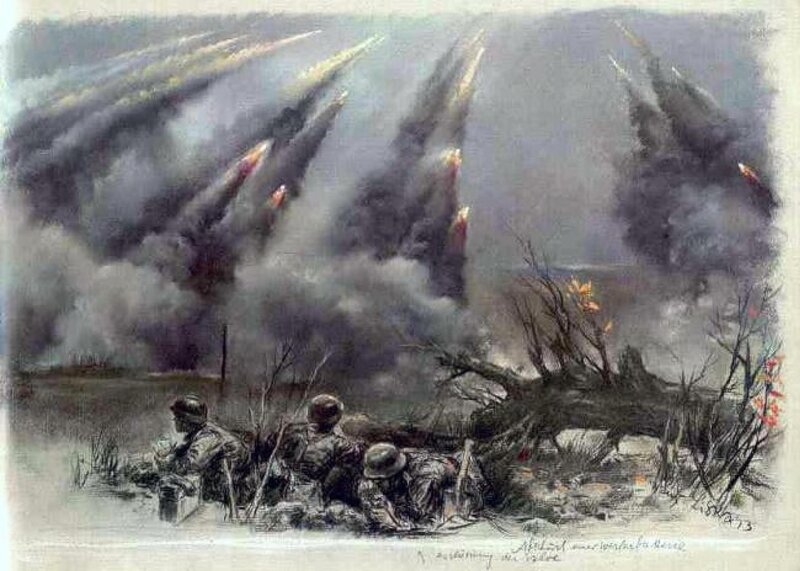 Salvo of the Nebelwerfer rocket battery. by Hans Liska

Its initial use was under jet gas mines – with chemical weapons or for creating smoke screens. It was first used in European theaters of war during the French campaign, and was used specifically for setting up smoke screens. It was also used during the Battle of Crete (Operation Mercury) – already as a strike weapon, due to its compactness and low weight. During the attack on the Soviet Union, it was first used against the Brest Fortress as a strike weapon (used by the 4th Special Purpose Chemical Regiment), firing over 2,880 150 mm high-explosive rocket mines (3 times more powerful than a standard projectile for 150 mm howitzers).

On the eastern front, the installation was used in the most important directions and only in conjunction with barrel artillery – due to this, a myth appeared in Soviet historiography about allegedly large accumulations of enemy heavy artillery. Delivered fairly accurate strikes at long ranges. Due to its compactness, it was also used in amphibious operations.

The smoke trail left by the shells was an excellent reference point for enemy artillery, so it was needed to change position as soon as possible. But due to the fact that on the Soviet front “Nebelwerfer” was used in conjunction with regular heavy artillery, howitzers and cannons, such a need for a quick shelter was not required until 1943.

The rockets used for the Nebelwerfer were also used on German air defense planes to attack dense Allied bombers.The main disadvantage of the mortar in the later stages of the war was its low mobility, because of which it could become prey for the enemy air dominant aircraft. For greater mobility, the mortar was installed on a half-track chassis. This machine was named “Panzerwerfer”. The ammunition transporter, which housed 20-30 rocket mines, was named Munitionskraftwagen fur Nebelwerfer (Sd.Kfz.4). At the end of the war, cheap (often wooden) disposable Wurfrahmen launchers were produced, which were delivered to the firing position on a tractor.