“Sturmtiger” is a self-propelled artillery mount, which was a “Tiger I” tank converted into an assault gun, designed for firing special projectiles at stationary targets.

“Sturmtiger” could fire both direct fire, and from a position remote to a distance of 6 km. The 380-mm mortar, or howitzer, was created as an arsenal of submarines for firing ground targets, since the gun was fired using rocket propulsion, this installation can be considered the forerunner of modern ballistic missiles launched from submarines. When the Kriegsmarine abandoned his venture, the army chiefs got the mortar.

The only suitable self-propelled platform for it was the Tiger tank. The troops on the Eastern Front needed something similar (210 mm caliber or so) to deal with difficult targets. It seemed that “Sturmtiger” had a great future, but by the time the manufacturers managed to launch the product in series, August 1944 had already begun, Germany now went deeper into the defenses, and therefore there was no big order. The Alkett company was engaged in construction, taking the Ausf E as the basis for the Tiger, on which specialists installed an angular armored cabin with an inclined frontal armor plate.

The corps of the German tank “Tiger I”, which was used as the basis for the “Sturmtiger”.

The barrel of the rocket launcher was slightly shifted to the starboard side and provided with openings for the discharge of gases from a rocket. In the fighting compartment, only 12 shells were placed, but with the help of a hand crane it was possible to replenish the ammunition from the side of the conveyor through the sunroof for the transportation of ammunition. Each shell weighed 350 kg, so for the transportation of them from the storage location of the ammunition to the bolt of the launcher in the cabin there was another crane. Different sources call completely different numbers of the released Sturmtigers – from 10 to 81 units, but the most reliable number is 18 units. They entered service with three batteries of the Sturmmersers and took some part in the defense of Germany, thus, in fact, were not used for their intended purpose. 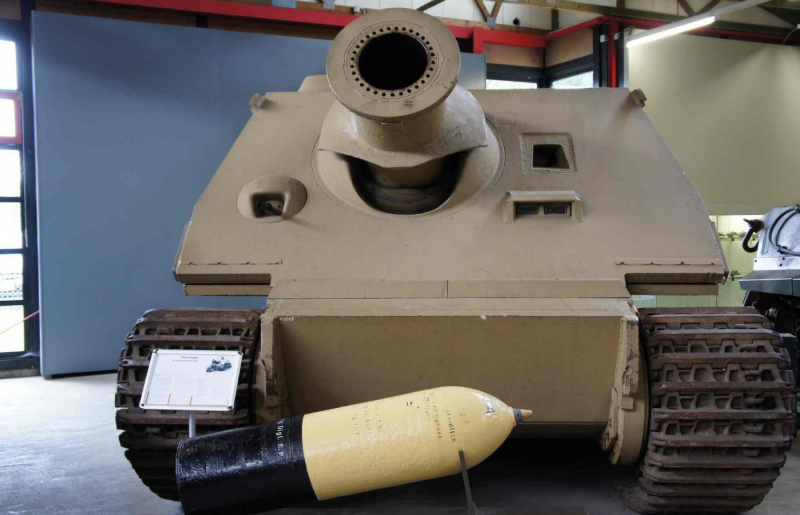 The barrel of the rocket launcher was slightly shifted to the starboard side.

The use of the latest armament for its time at the “Sturmtiger” – a jet bomb (in various sources also called a rocket mortar or rocket launcher) – provided the self-propelled guns with unmatched firepower in its class, comparable only to the railway or the heaviest traditional artillery systems. Along with this, the jet bomb, as well as its deployment on the “Sturmtiger”, had a number of serious drawbacks. One of them was the extremely low accuracy, characteristic, however, of any rocket artillery of that time – at a maximum firing distance of 5700 meters, the range of hits was up to 4% of the firing distance, or a circle with a diameter of about 230 meters. However, taking into account the purpose of the “Sturmtiger”, this was not such a serious drawback – in urban conditions, the usual firing distance was much smaller, and the average dispersion in a radius of 5 meters at a distance of 1000 meters completely allowed firing at such large targets as buildings or fortifications. Another drawback, which was already related to the caliber of the system, was its extremely low rate of fire – even in the relatively spacious cabin of the self-propelled guns, 4 people could not provide it with a rate of fire of more than 1 shot in 10 minutes. 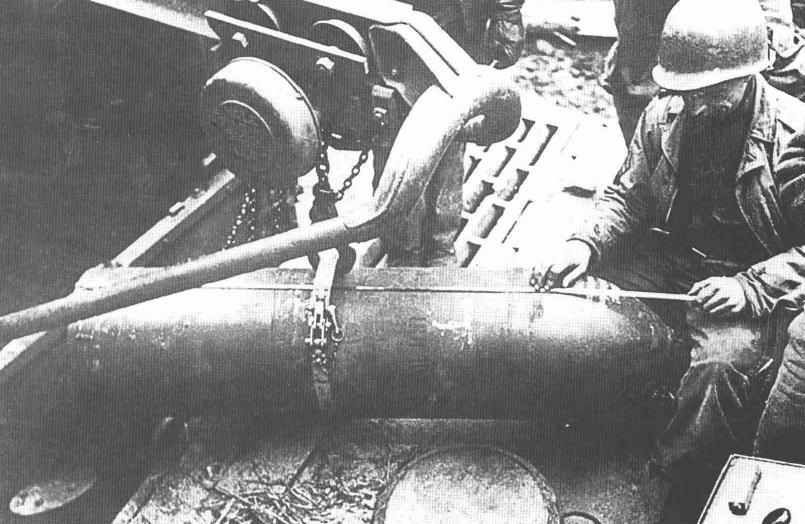 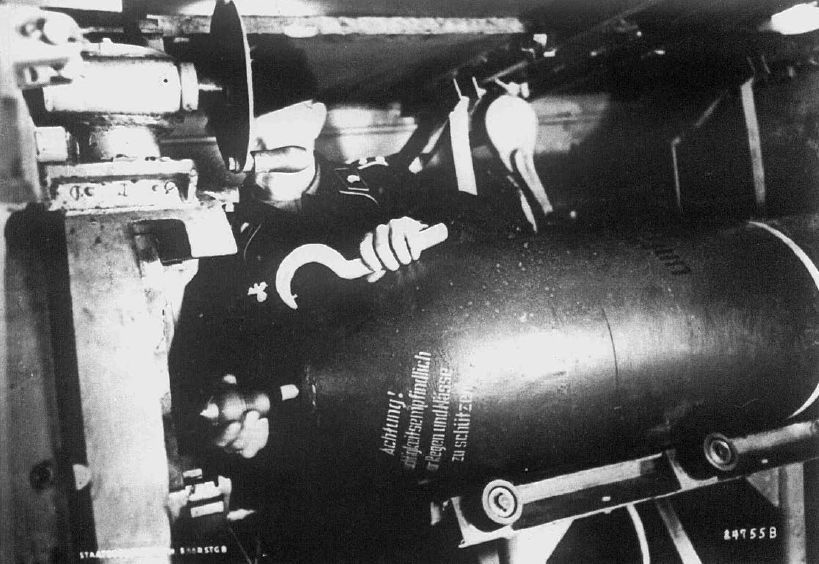 “Sturmtiger” was designed as a machine for action in urban conditions, capable of withstanding the fire of anti-tank artillery from all directions. The protection of the front of the “Sturmtigers” of the early releases was one of the highest among all armored vehicles used in the Second World War and was comparable to the reservation of the “Royal Tiger”. The frontal part of the felling, 150 mm thick, located at an angle of 47 ° to the vertical, was not vulnerable to even the most powerful tank and anti-tank guns. Of the anti-tank guns, only the British 76-mm anti-tank gun QF 17 pounder when using a projectile, the Soviet 100-mm field gun of the 1944 model (BS-3) and the American 90-mm anti-aircraft gun M2 (used as a tank and anti-tank projectile) had a chance to break through it at extremely small distances. At the same time, this detail also had its weak point – the 380-mm bore of the bomber’s barrel, a hit in which, quite likely at short distances, even with the most favorable outcome for the ACS crew, was guaranteed to deprive the vehicle of combat readiness. The lower part of the early vehicles, in addition to the basic 100 mm “Tiger” plate, was protected by an additional 50 mm armor plate bolted, but in the future, since the reservation of the basic tanks proved to be quite sufficient in combat conditions, additional plates were not installed so as not to burden an already unreliable machine due to congestion. Even the basic 100-mm plate, located on the Sturmtiger at an angle of 25 °, provided protection against most tank and anti-tank guns at normal combat distances. In these conditions, the frontal booking of the cabin seemed redundant and overloaded the machine without significantly increasing its protection.

The security of the airborne and stern projections of the Sturmtiger remained generally at the level of the base vehicle. If at the beginning of 1943 it provided it with reliable protection against the vast majority of tank and anti-tank guns, then already by 1944 the development of anti-tank artillery deprived the “Sturmtiger” of this advantage. Although artillery systems capable of penetrating its side armor from long distances, such as the 76-mm M5 or QF 17 pounder, or the 57-mm ZIS-2, were relatively few, the use of self-propelled guns in urban areas made even relatively ineffective obsolete guns dangerous for it. Moreover, any penetration of armor for the “Sturmtiger”, which carried more than a ton of explosives on the sides of the fighting compartment, posed a significant threat. 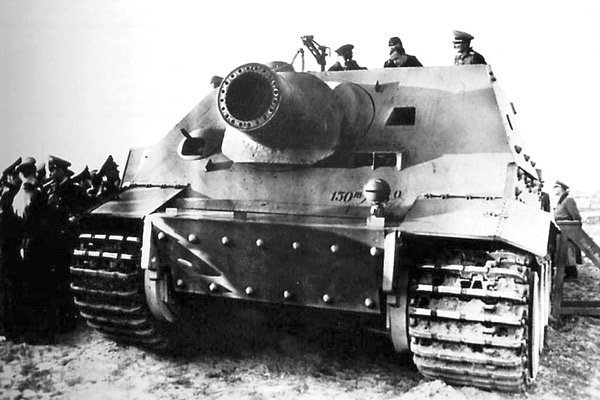 38 cm Panzermörser Sturmtiger Ausf.E – The largest of all self-propelled guns used in the Second World War. It was used to destroy fortifications and shelling enemy clusters. 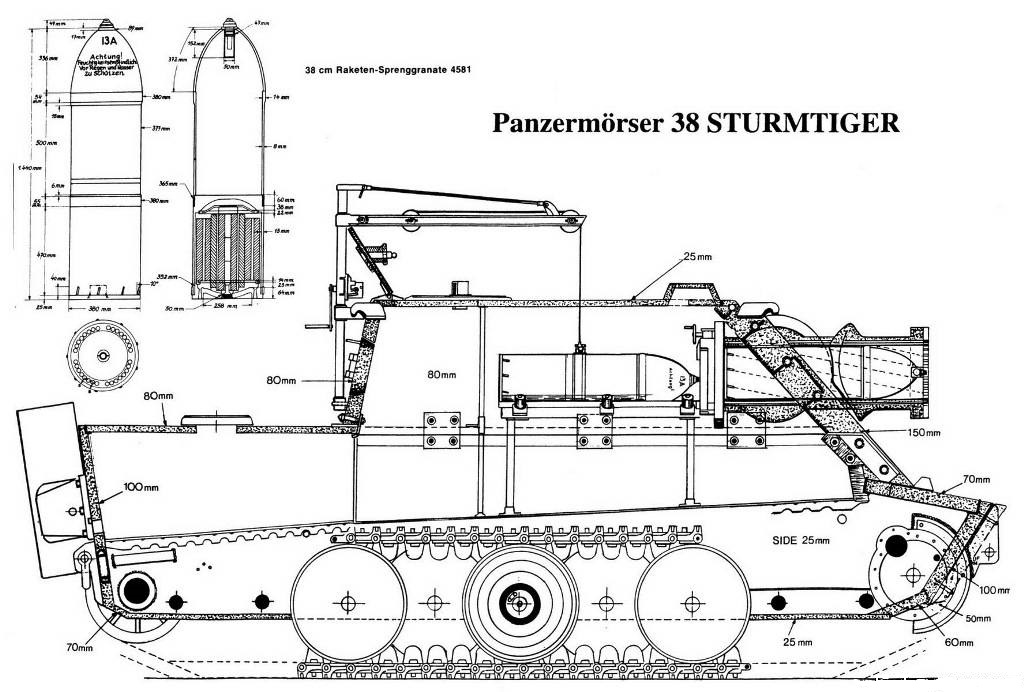 Drawing of the Sturmtiger.

During its comparatively short service, the “Sturmtiger” was hardly able to be used for its intended purpose. The only episode when the Sturmtiger was able to take part in the storming of cities was the suppression of the Warsaw Uprising. Subsequently, although the Sturmtigers were sent more than once to carry out such tasks, the situation at the front, aggravated by the frequent breakdowns of self-propelled guns, invariably prevented this. However, in those individual episodes when the Sturmtigers were used against suitable targets – buildings or fortified points, its 380-mm gun proved to be highly effective in destroying them.

However, in the conditions of the retreat of the German troops, such targets were rare, and in those cases when the “Sturmtigers” did enter the battle, the attacking Anglo-American units usually became their target. Under the same conditions, such shortcomings of the “Sturmtiger”, such as low firing accuracy and extremely slow reloading, became critical. Constant problems with the reliability and lack of ammunition, exacerbated by interruptions in supply, led to the fact that the vast majority of “Sturmtigers” were not destroyed in battle, but were blown up and abandoned by their crews. 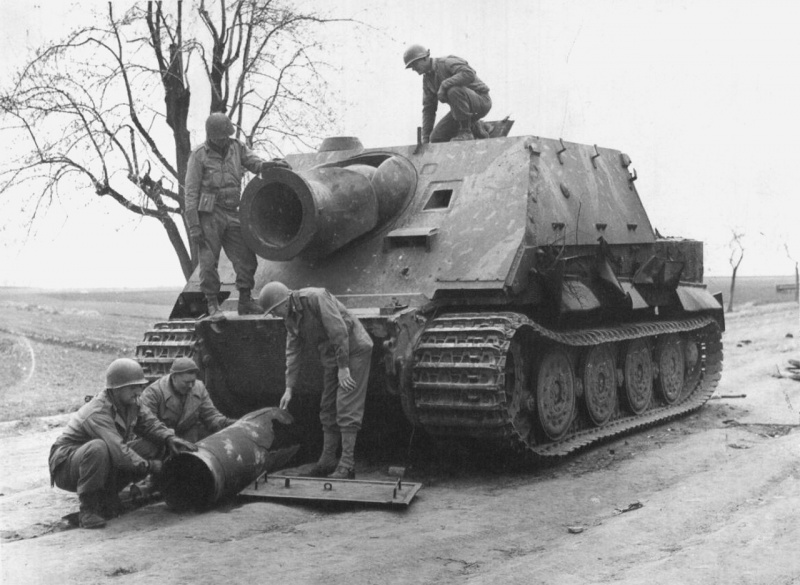 Soldiers of the 9th US Army visiting the German self-propelled guns Sturmtiger, captured in the Minden area, Germany. In the foreground is the ruined body of a 380-mm high-explosive rocket. 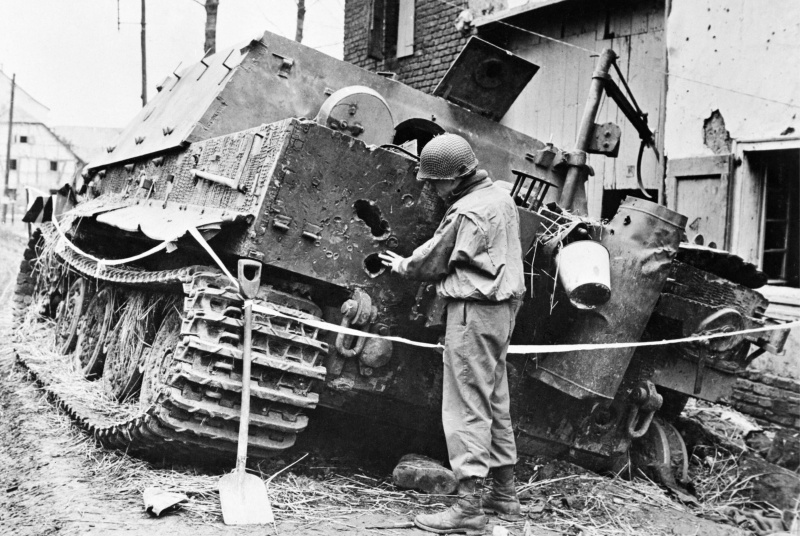