Today you will learn about a woman who, during the Third Reich, distinguished herself by ferocious, inhuman acts. Ilsa Koch, a faithful companion of Karl Koch, commandant of Buchenwald and Majdanek, was famous for the cruel torture of prisoners in death camps and for making souvenirs from human skin.

Margarete Ilse Köhler was born on September 22, 1906 in Dresden in a working class family. At school, she was a diligent student and a very cheerful child. In her youth, Ilse worked as a librarian. The girl enjoyed success with the village boys, but always considered herself superior to others, clearly exaggerating her merits. In 1932 she joined the NSDAP. In 1934 she met Karl Koch, whom she married two years later. 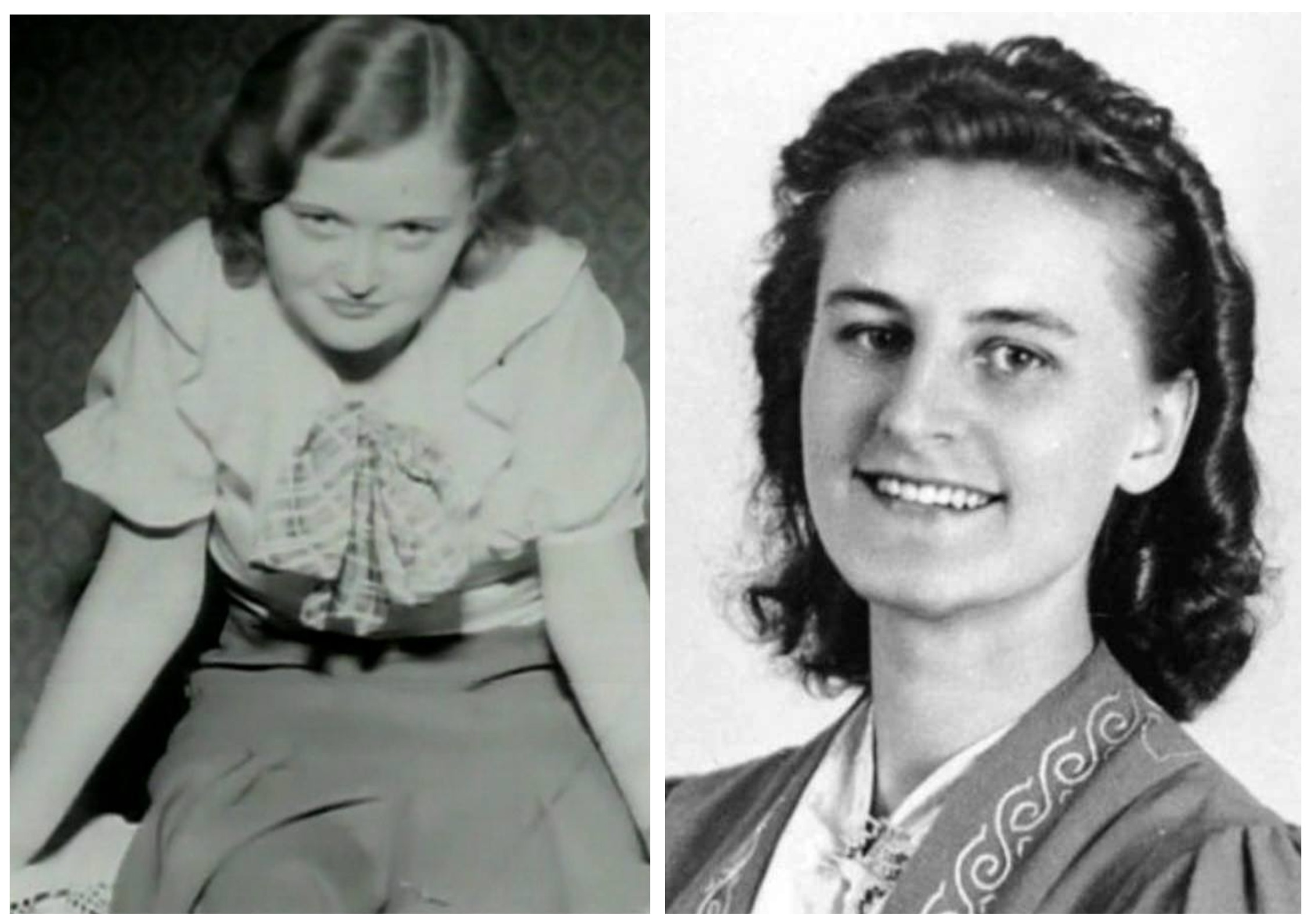 Ilse Köhler (Ilse Koch) in her youth. The face of the beast is hidden behind a sweet smile.

Karl-Otto Koch (August 1897 – 5 April 1945) was a mid-ranking commander in the Schutzstaffel (SS) of Nazi Germany who was the first commandant of the Nazi concentration camps at Buchenwald and Sachsenhausen. Before World War I, Karl Koch worked as a bank clerk. During the war, he was captured by British troops and was held captive until 1919. After his release from captivity, in 1930, Koch joined the NSDAP, and soon the SS. In 1934 he was appointed commandant of the concentration camp in Lichtenburg, in 1936 he was transferred to Sachsenhauchsen.

Ilse took her husband’s surname. In 1937, Koch became the first commandant of the newly created Buchenwald camp. Ilse moved in with her husband and later became one of Buchenwald’s overseers. From that moment on, a terrible period began for the prisoners of concentration camps, and a comfortable and eventful period for the Koch family. 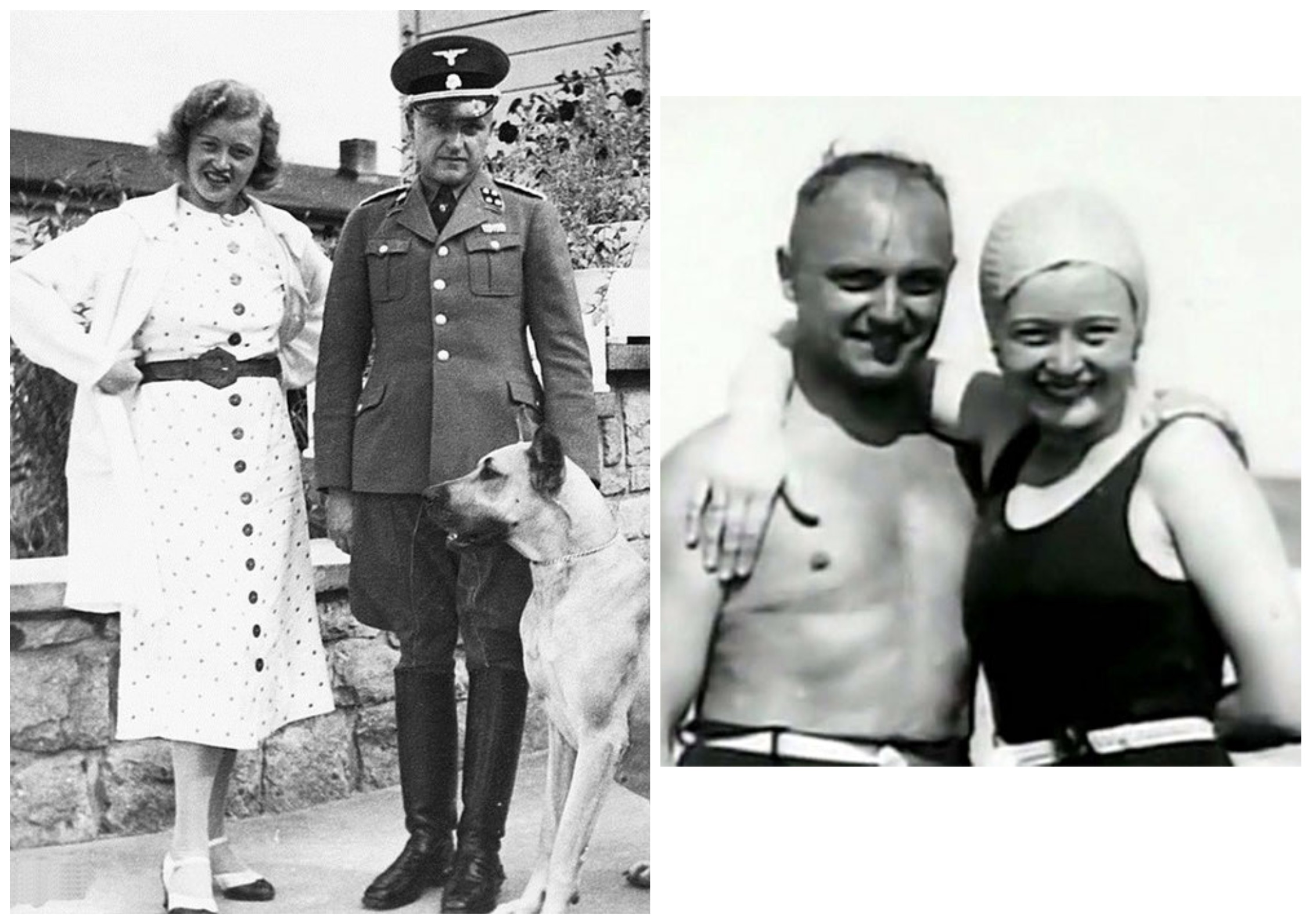 The couple lived modestly until, in July 1937, Karl Koch took over the newly created Buchenwald. Ilse Koch, being a faithful wife, followed him and again took the post of overseer.

The Koch family settled in a luxurious villa near Buchenwald, near the SS headquarters in Weimar. Evidence claims it was built with money and valuables stolen from death camp prisoners. 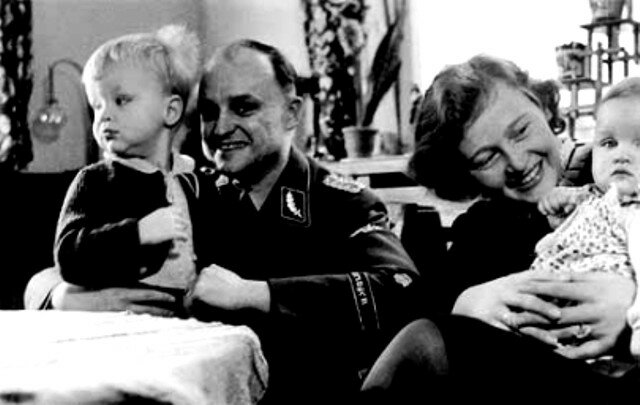 Karl and Ilse with their children.

Atrocities of a Buchenwald bitch

Only Irma Grese, the warden of Auschwitz, Ravensbrück and Bergen-Belsen, could compete in brutality with Ilse Koch. Both of these girls in their youth were distinguished by a pleasant appearance and nasty, perverse desires. And even their methods were similar.

While Koch reveled in power as he watched the daily extermination of people, his wife enjoyed the torture of the prisoners even more. The sadist usually walked around the camp, whipping out blows to anyone in striped clothes. Sometimes she took a ferocious shepherd with her and was delighted, setting the dog on pregnant women or prisoners with a heavy load. For this she was nicknamed the Buchenwald Bitch and the Buchenwald Witch.

Prisoners could receive punishment from the hands of Ilse Koch for any reason: if they did not say hello to her, or if they said hello, but not subserviently enough; if they looked at her lustfully, although the warden deliberately wore defiant clothes. People with tattoos enjoyed particular attention of the Buchenwald Beast. 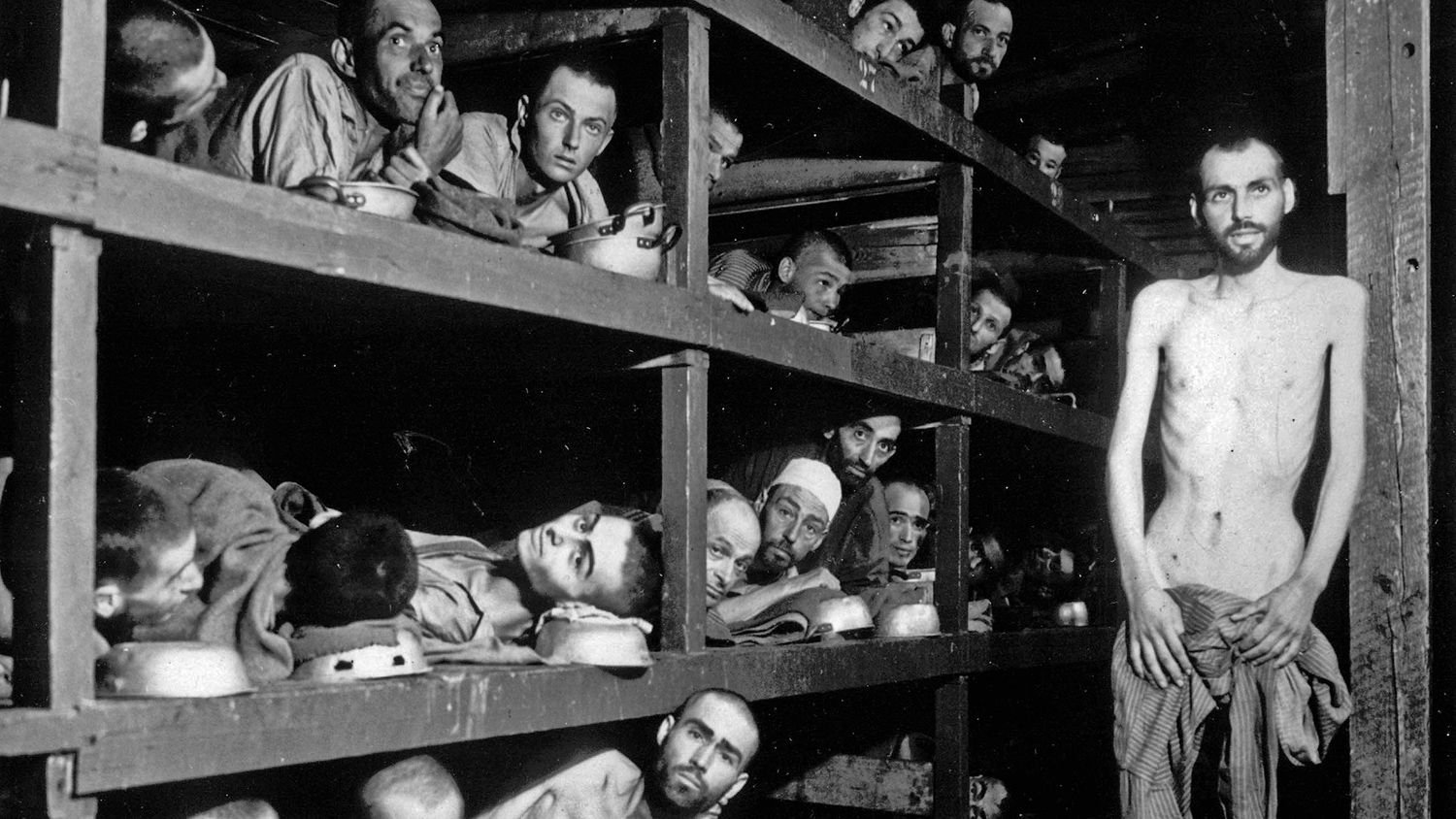 Once Ilse Koch entered the Buchenwald barracks and demanded that the prisoners undress. When Ilse saw beautiful tattoos on the body of the prisoners, a devilish fire flashed in her eyes. She chose several dozen people with tattoos, ordered them to be killed and skinned. It is believed that Ilse Koch made monstrous “crafts” from the patterned human skin.

One of the concentration camp prisoners, Jew Albert Grenovsky, who was forced to work in the Buchenwald pathology laboratory, said after the war that prisoners selected by Ilse with tattoos were taken to the dispensary. There they were killed using lethal injections. Bodies with tattoos were taken to the laboratory, where they were treated with alcohol and carefully peeled off the skin. Then it was dried, oiled with vegetable oil and packed in special bags. 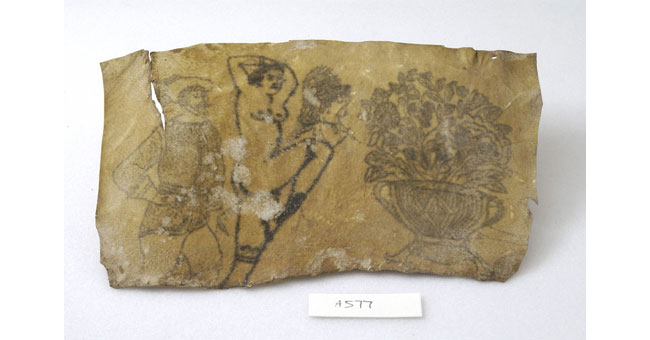 A part of ​​human skin on which the tattoo is present. A large number of such “souvenirs” were found in the territory of Buchenwald. 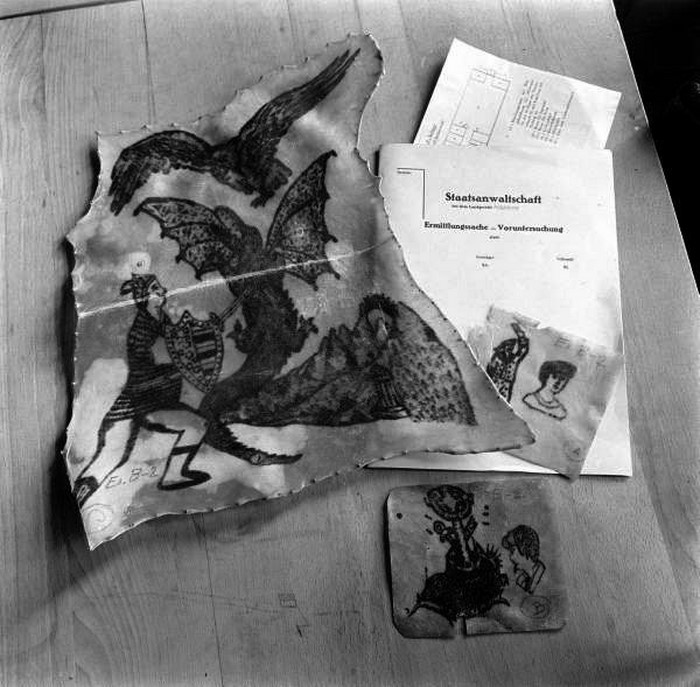 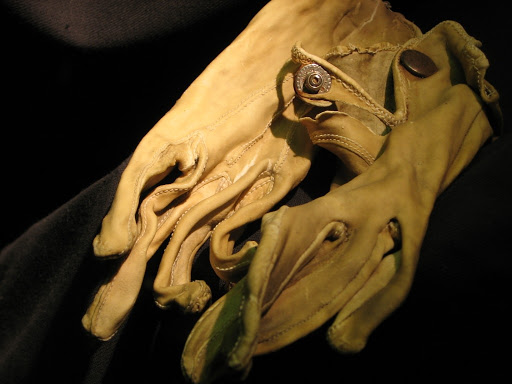 Gloves made of human skin, personally made by Ilse Koch. 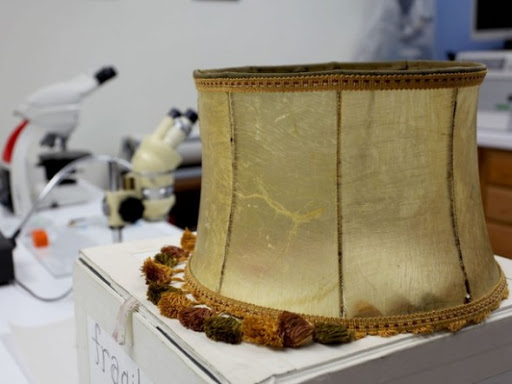 A beautiful lampshade made from the leather of a Buchenwald prisoner.

More recently, in one of the flea markets in Poland, an antiquary named Pavel Krachkovsky discovered a photo album made from the skin of prisoners of the Nazi death camp Buchenwald. This album is believed by historians to have been donated by the Buchenwald fire brigade to the Bavarian family that ran the holiday home. According to the owner, who handed it over to the Auschwitz-Birkenau memorial complex, the album was in a deplorable state and gave off an unpleasant odor. 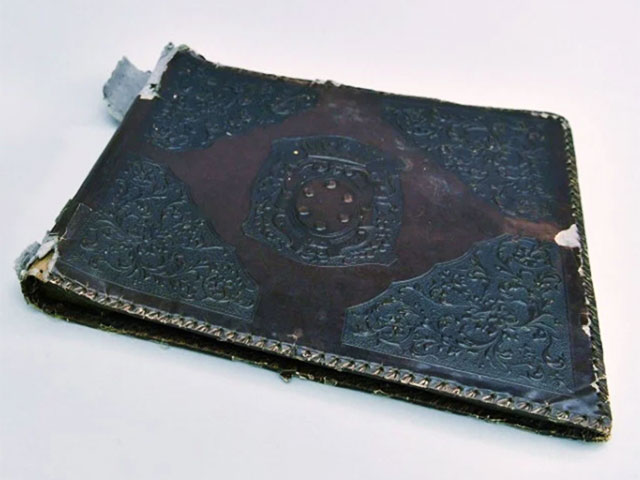 An album made of leather of Buchenwald prisoners is a find of a Polish antiquarian. Photo: Memorial and Museum Auschwitz-Birkenau

Ilse Koch’s fearsome skill became fashionable among her colleagues in other concentration camps. She was in active correspondence with the wives of the commandants of other camps and gave them detailed instructions on how to turn human skin into exotic book bindings, lampshades, gloves, tablecloths, etc.

There was only one way not to get to this “craftswoman” on the lampshade – to disfigure your skin or die in the gas chamber.

Another terrible find was a dried human head (Tsantsa) – a specially dried human head, when human facial features are preserved, but the head becomes the size of a fist. 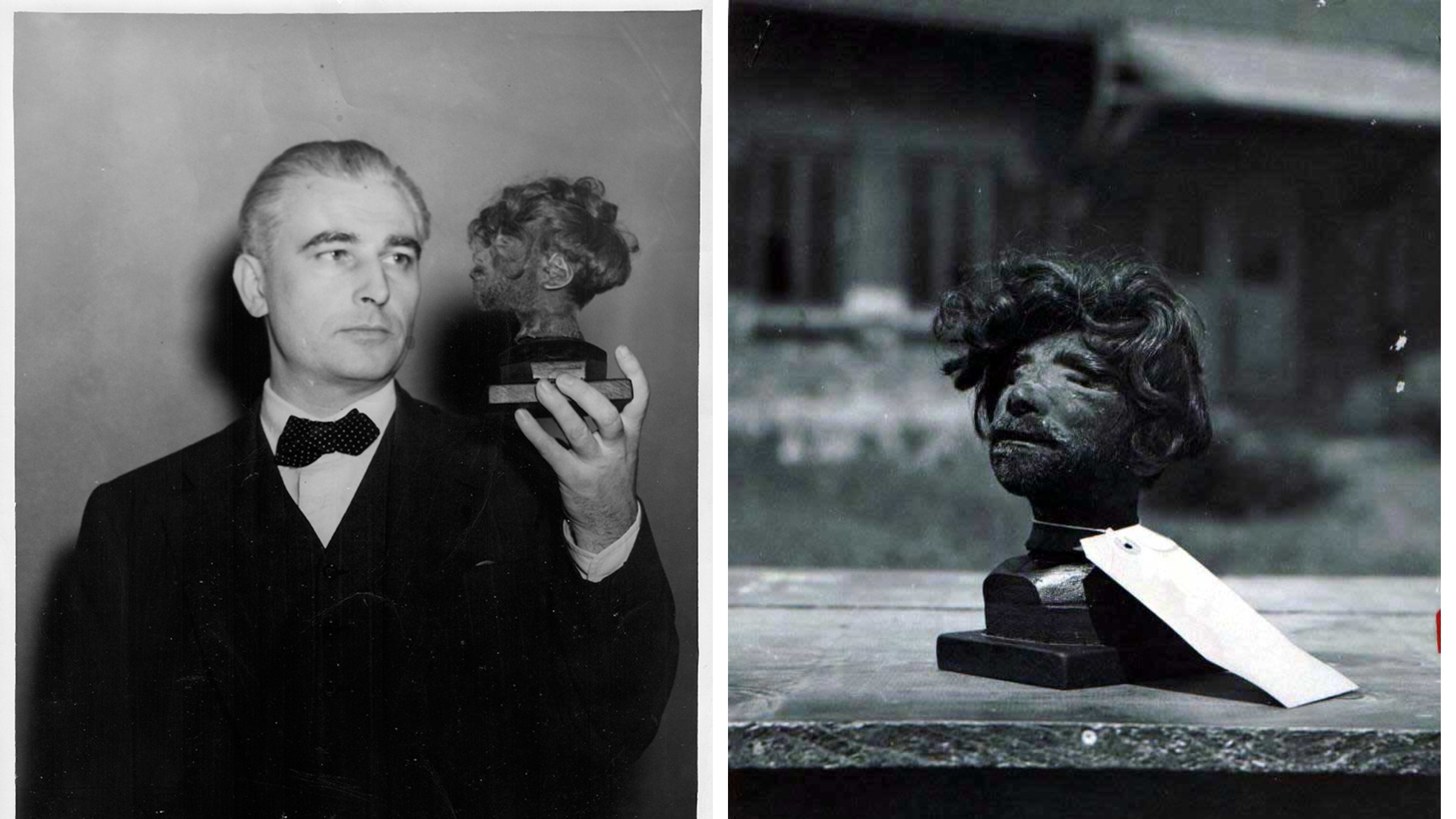 A US prosecutor demonstrates the severed head of a man brought from a concentration camp in Buchenwald, where it stood on the camp commander’s desk. Nuremberg. American zone of occupation of Germany. December 7, 1945. 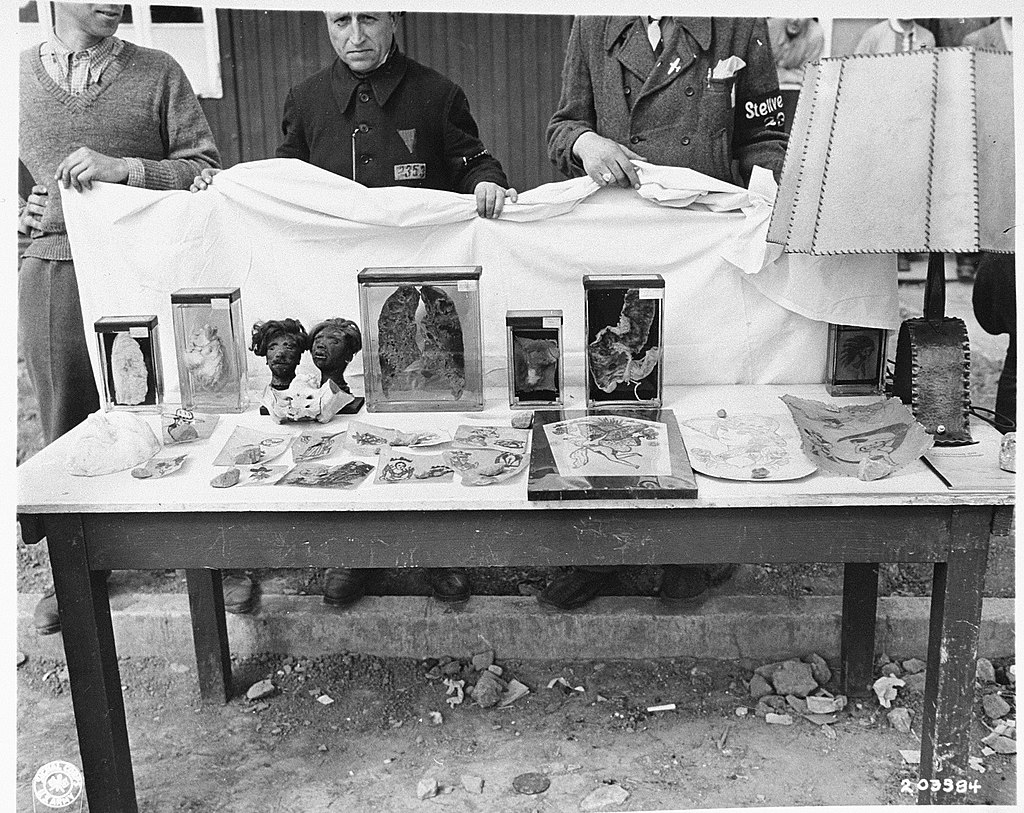 Buchenwald, April 16, 1945 Collection of internal organs of prisoners, including the remains of two human heads (top left), as well as samples of tattooed skins (foreground).

The collapse of the power of fanatics

The bloody “craft” did not go unnoticed by the authorities, and at the end of 1941 the Kochs were brought before an SS court in Kassel. They were accused of “excessive cruelty and moral corruption.” However, this time the sadists managed to avoid punishment – the court decided that they had become victims of a slander by the ill-wishers. The former commandant was for some time an adviser in another concentration camp, but the fanatic spouses then returned to Buchenwald and continued their “activity”.

In 1944, Karl Koch appeared before a military tribunal – he was accused of killing an SS man who repeatedly complained of extortion from the commandant. It was discovered that Koch was pulling out gold tooth crowns from people, appropriating jewelry that was supposed to go to the safes of the Reichsbank. Koch did not take into account that it was not torture and murder, but theft in the eyes of the highest ranks of the SS that was the most serious crime. Koch’s guilt was fully proven, and he was shot on the April morning of 1945, a few days before the liberation of the camp by the allied forces. 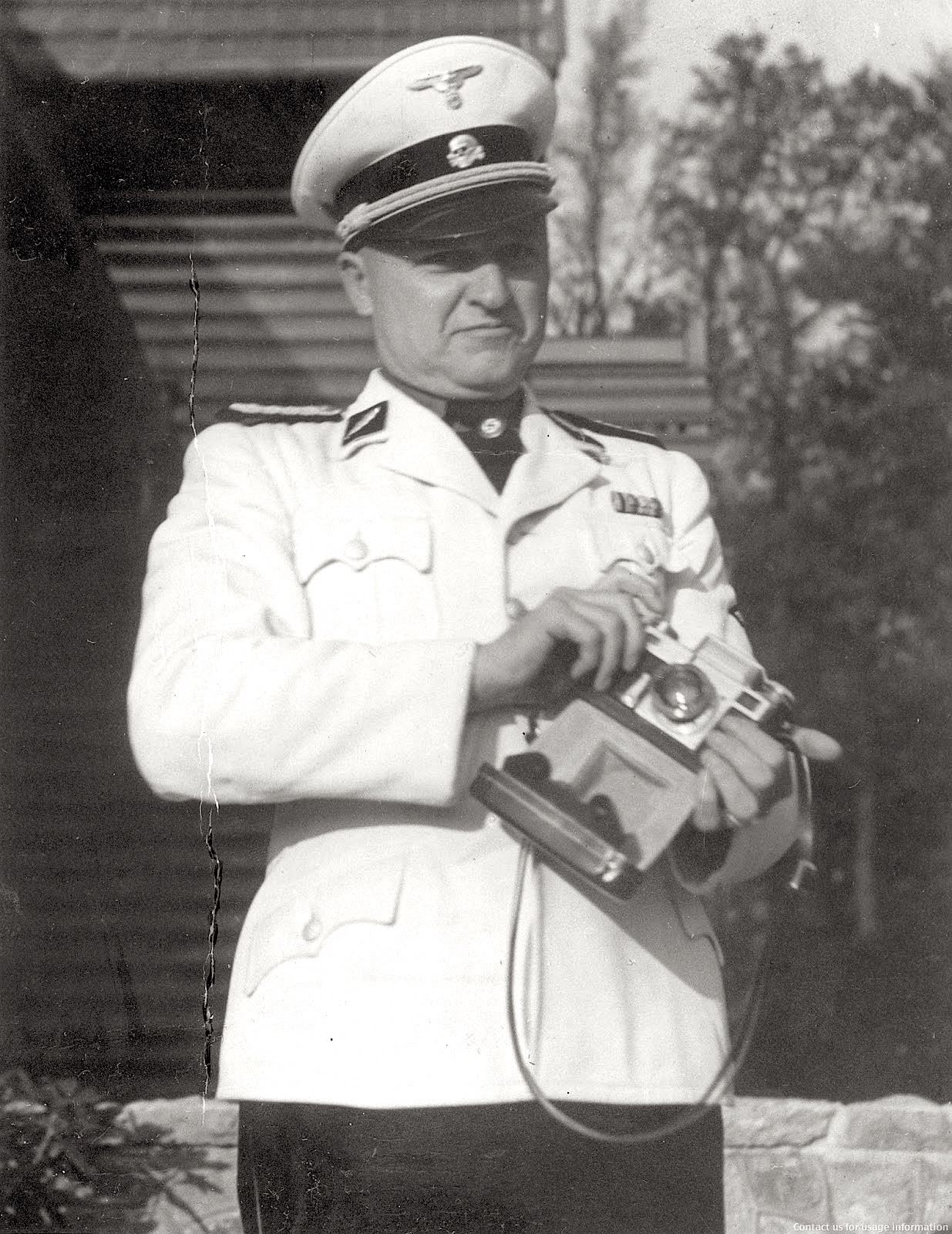 Koch was executed by firing squad on 5 April 1945, one week before American allied troops arrived to liberate the camp.

The widowed Ilse was no less guilty than her husband. But in the eyes of the SS, her guilt was insignificant, and the sadist was released from custody. Shortly before the end of the war, she settled on her parents’ farm near Ludwigsberg. Justice overtook her only in 1947. Before the trial, the former Nazi was kept in prison, here forty-year-old Ilse became pregnant by a German soldier. Nonetheless, she appeared before an American military tribunal to answer for her crimes.
“The blood of more than 50 thousand Buchenwald victims is on her hands,” the prosecutor said, “and the fact that this woman is currently pregnant does not exempt her from punishment.

American General Emil Keel sentenced Ilse Koch to life in prison. However, in 1951, General Lucius Clay, the high commissioner of the American occupation zone in Germany, unexpectedly gave Ilse Koch freedom. At the same time, he stated that there is only “insignificant evidence that she ordered someone to be executed, and there is no evidence of her involvement in making crafts from tattooed leather.” When the war criminal was released, the world refused to believe the decision was justified.

As soon as Ilse was released from the American military prison in Munich, she was arrested by the German authorities and imprisoned again. The Augsburg court took up the case. The 7-week hearing was attended by 250 witnesses, including 50 defense witnesses. At least four of them saw Ilse Koch making lampshades out of human skin or participated in the process. On January 15, 1951, Ilse Koch was accused of several murders, causing grievous bodily harm. She was again sentenced to life in prison, this time finally. 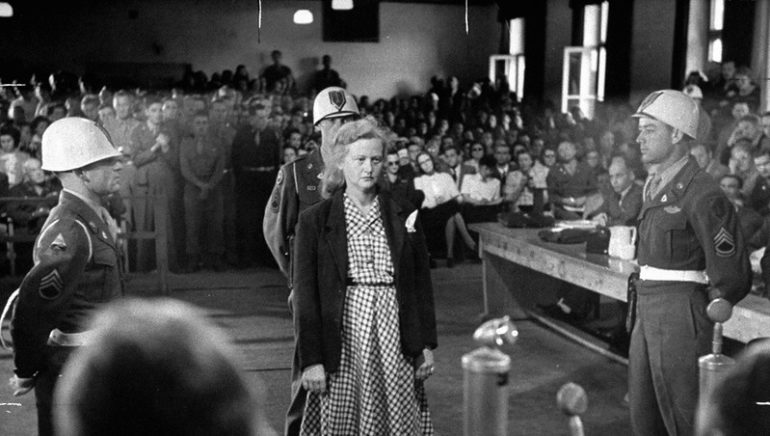 Ilse Koch, who appeared before the court.

The Buchenwald witch did not live to see her 61st birthday only a few weeks. On September 1, while in a cell in a Bavarian prison, she had dinner for the last time, wrote a farewell letter to her son and, tying a noose from a sheet, hanged herself.

Ilse Koch is buried in an unmarked grave in Eichach.