Today I will tell you about the method of aircraft bombing, which was used only by the bravest pilots of World War II.

Top-mast bombing (Skip bombing) – the method of bombing, used by naval aviation of the warring parties to deal with surface ships during the Second World War, using the ability of bombs to ricochet from the surface of the water. This method was tested back in the 1920s, but was not developed due to the lack of aircraft with sufficiently high speed, carrying capacity and front fire power.

To combat surface targets, aircraft of the Second World War used machine-gun fire, torpedoes, aerial bombs, as well as the setting of sea mines. The use of air bombs was the safest for the aircraft itself, since the bombing did not require maximum rapprochement with the ship, which allowed to avoid effective (and therefore dangerous for the attacking aircraft) countermeasures from ship’s air defense. However, the combat effectiveness of the bombers was, accordingly, lower than that of the torpedo bombers – due to the small size and maneuverability of naval targets and the low accuracy of bombing. The use of dive bombers was limited by the small radius of flight of specialized aircraft. The top-mast bombing method was a successful compromise with high impact efficiency and comparative safety for conventional bombers. To apply it, the feature of air bombs to ricochet from the water surface was used – at a sufficiently high speed of the aircraft and low altitude during the bomb drop, the longitudinal axis of which does not have time to deviate from the horizontal.

It is known that the method of “jumping” bombing was used in 1941-1943 at the Mediterranean theater of operations. In the Navy of the USSR, this method began to be tested at the end of 1943. The first combat use of the top-mast bombing took place on the Black Sea; later this method was adopted by the aviation of the Northern and Baltic Fleets.

When testing this method, there was a lack of strict patterns in the flight of a bomb after meeting with water, but it was determined that with a climb above 15 meters, the length of the rebound of the dropped bomb decreases, and after a height of 40 meters the rebound disappears completely, although the bomb continues to move in a zigzag direction towards the target under water.

Pilots usually arrived in the target area at an altitude of 1000-1500 m in general battle order with support groups. Approaching the target was carried out by diving to a height of 400-500 m. Then a smooth exit from the diving was carried out so that the aircraft had a flight height of 20-40 m at a distance from the target of 600-1000 m. From this distance the combat course began, on which the aircraft went at increased speed for 4-5 seconds, after which the bombs were dropped individually or in one gulp at a distance of 250-300 meters from the target. With such a low drop height, the aerial bomb falls on the water almost horizontally, ricochets from it to a height of 6-8 m and hits the target. After that, the aircraft “jumped” over the target and left the air defense zone.

To avoid undermining the aircraft on their own bombs, their fuses were set to slow down for 4-6 seconds.

A bomber pilot (B) aimed his plane at vehicles; it is the pilot who determines the right moment [for dropping bombs], and not the scorer (C), who ultimately drops the bombs. When the aircraft approaches the distance necessary for the attack, the bombs detach from the aircraft, hit the water surface, causing a splash (D), and then hit the side or superstructure of the vessel. At this time, the aircraft (E) flies over the ship and leaves the danger zone. Explosion delayed bombs are sometimes used; this gives the attacking aircraft more time to move away from the target before the dropped bombs explode.

The top-mast method had certain advantages over low torpedo throwing: torpedoes were dropped at a distance of 600-800 meters from the ship and covered this distance in 30-40 seconds;  sometimes this time was enough for the ship to successfully complete the evasion maneuver. With top-mast bombing, a bomb takes only 2-3 seconds to fall, and it is impossible to evade it. In addition, the dropping of bombs could be carried out at maximum speed, which reduced the likelihood of aircraft being hit by air defense systems, while in order to avoid damage to the torpedo, it should be dropped at speeds of 230-370 km / h. Work on the combat course was facilitated (it is easier to introduce corrections for the speed of the target due to the short time the bomb fell); sea ​​waves only affected the magnitude of the rebound of the bomb, while torpedo throwing with sea waves above 4-5 points is impossible. Among other things, bombs are much cheaper than torpedoes.

To take advantage of all the methods, combined attacks were usually used: for example, to destroy the battleship “Schlesien” in 1945, groups of five planes were involved — four top-mast carriers with one torpedo bomber. At the same time, the topmasters went first, diverting the fire of air defense systems and providing the torpedo bomber with more favorable opportunities for attack.

Here we see a Douglas A-20 Havoc practising skip bombing. 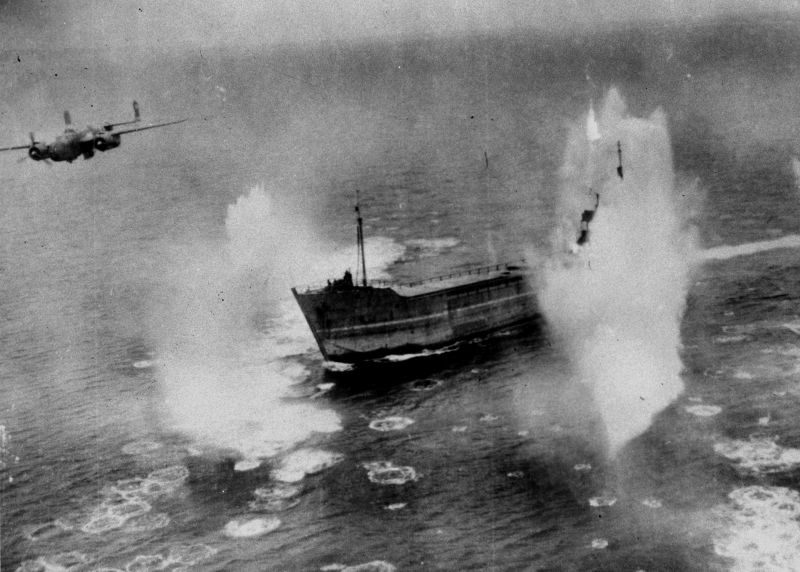 There is a case of a top-mast attack carried out by the heavy four-engine bomber B-17F “Black Jack” (serial No. 41-24521), owned by the 63rd squadron of the 43rd bomber group of the 5th Air Force of the US Air Force under the command of Captain Kenneth D. McCallar. His plane on November 24, 1942, as part of a squadron strike group, attacked five Japanese destroyers on a transport flight from Rabaul to Lae, and dropped ten 250-pound bombs on the Hayashio destroyer, five of which hit the target. The destroyer caught fire and soon sank.

The enemy used special mines to counter the attacks of top-mast (analogues of the AG-1 and AG-2 aircraft grenades used in the Red Army Air Force), which were thrown out in a series of several pieces right up to the course of the airplane’s flight and then descended by parachutes, creating serious interference for pilots during aiming and attacking the target.