Last time, while excavating the relics of the Second World War, I noticed one small German dugout. Taking a metal detector, I checked this dugout for metal. From all sides of the dugout, my detector made sounds, which meant only one thing – the need to dig.

My friend and I left for the forest in the morning. Arriving at the site, we had breakfast and started excavations. The first finds appeared at a depth of more than half a meter. These were the standard household items of a soldier. The first interesting find was a beautiful penknife with a bakelite handle. As it turned out later, it was a hoof knife for cleaning and processing horses’ hooves. 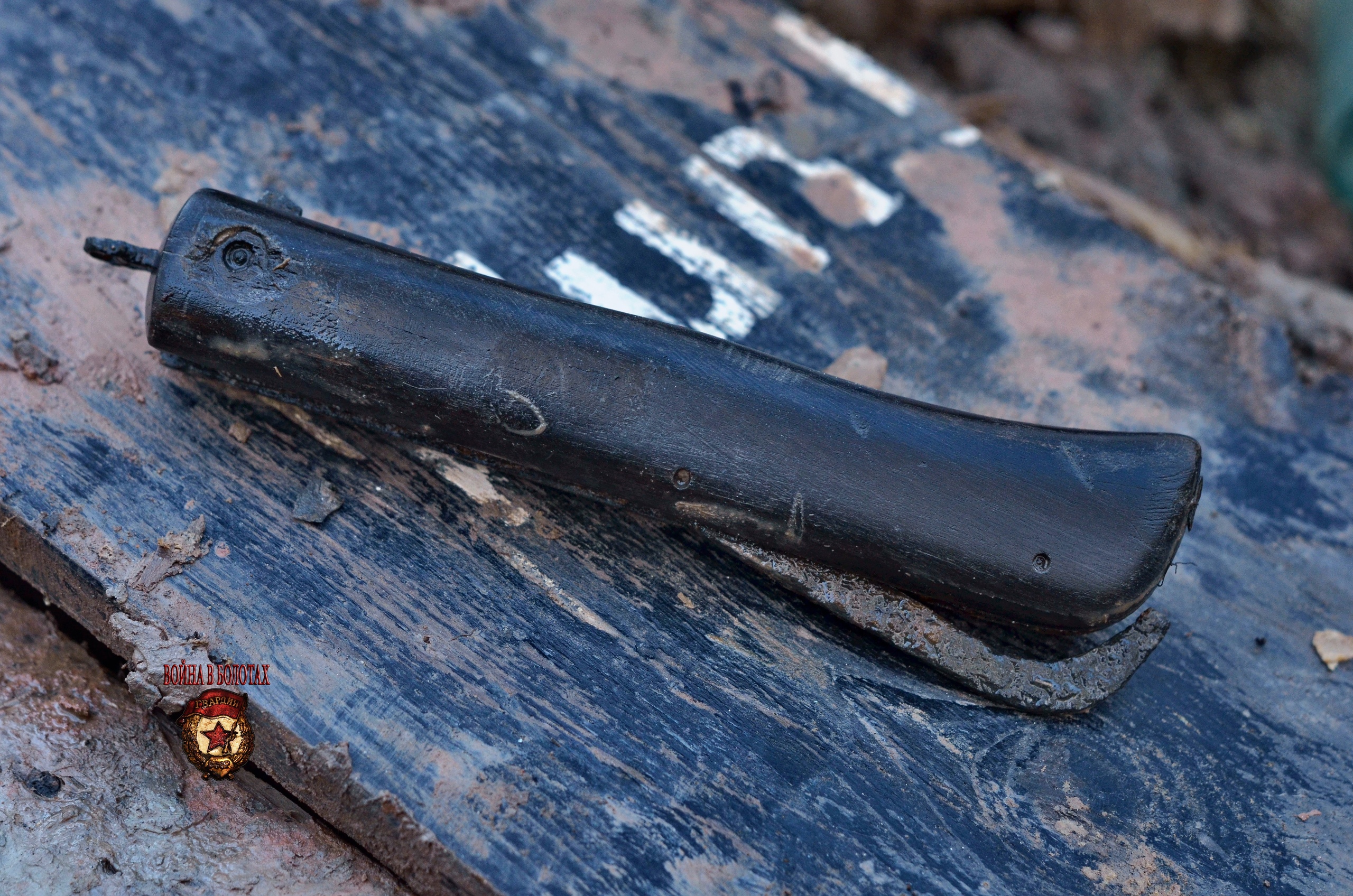 Hoof knife for cleaning and processing horses’ hooves. In the Leningrad forests, this was a top subject. Photo by @Swamp_war

After a couple of hours, finds became more and more. In one corner of the dugout, I found several combs, an empty tube of toothpaste, a bottle of cologne, and more. Most likely there was a washstand in this corner, where German soldiers put themselves in order in the morning.

In another corner lays a German gas mask canister, a pot lid, 7×92 cartridges, parts of the K98 carbine, a folding sapper shovel, a German M-24 grenade in excellent condition (paint and inscriptions on the grenade body were preserved) and so on. 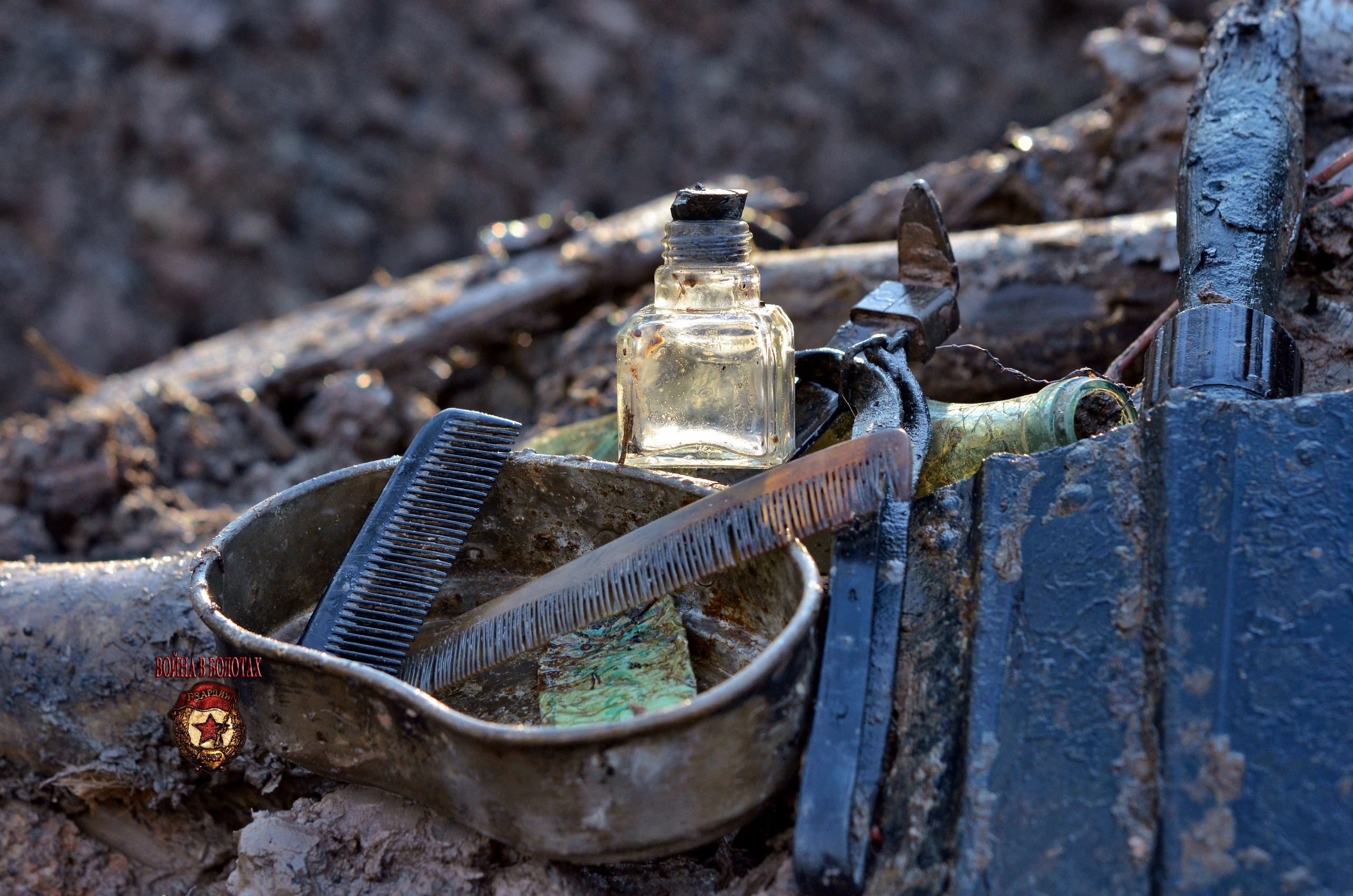 More than 70 years ago these items were used by soldiers of the Wehrmacht. Now these relics are in the local museum of the Second World War. Photo by @Swamp_war 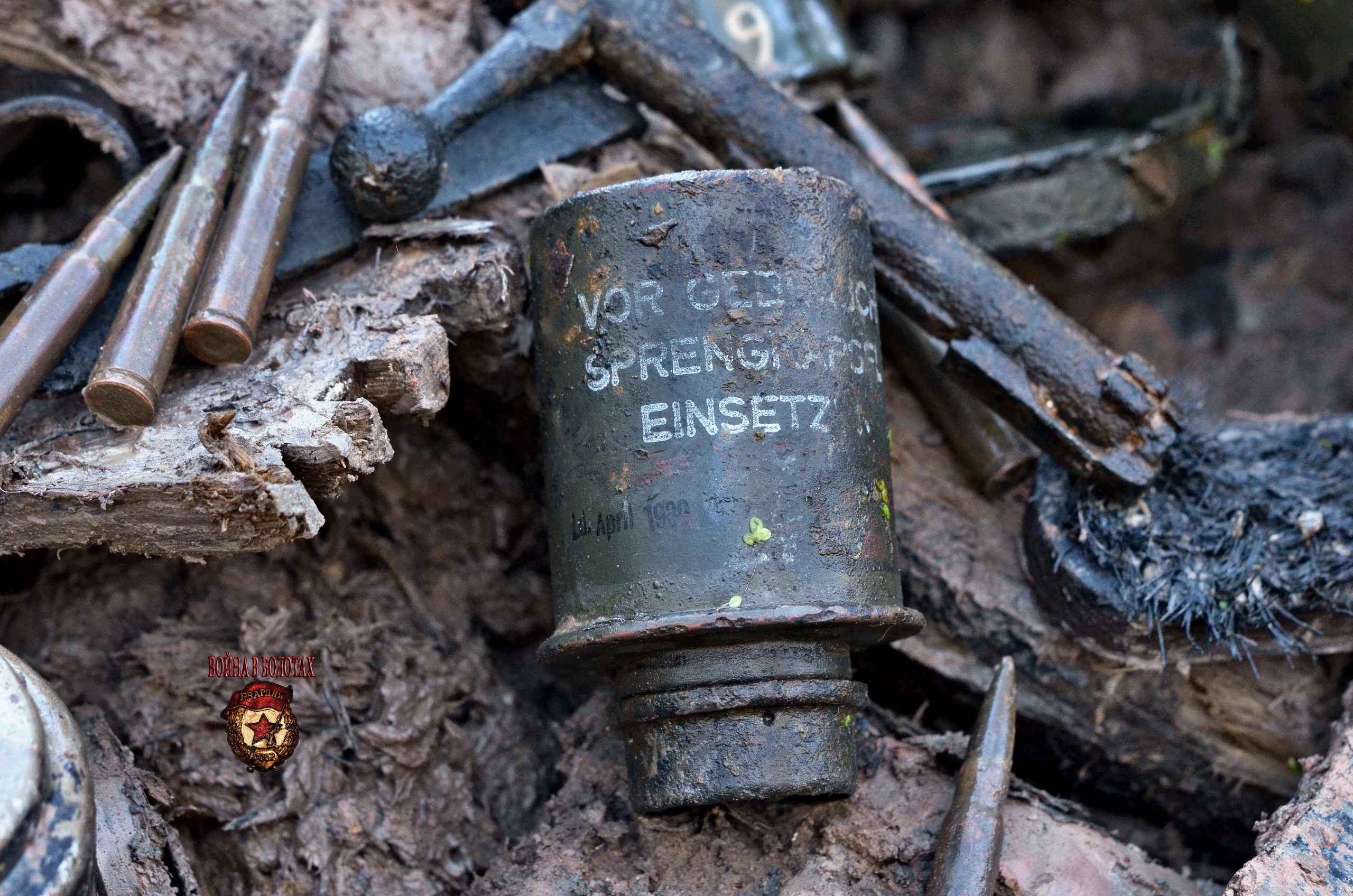 The Stielhandgranate (German for “stick hand grenade”) was a German hand grenade of unique design. It was the standard issue of the German Empire during World War I, and became the widespread issue of Nazi Germany’s Wehrmacht during World War II. The very distinctive appearance led to it being called a “stick grenade”, or “potato masher” in British Army slang, and is today one of the most easily recognized infantry weapons of the 20th century. Photo by @Swamp_war

Incredible luck to find a helmet in the dugout. Clay prevents oxygen from penetrating into the dugout, so all items are well preserved. This time we were very lucky – we found two German helmets in winter colors in the dugout. These helmets were in perfect condition and beautiful in appearance. Even the leather parts looked new. 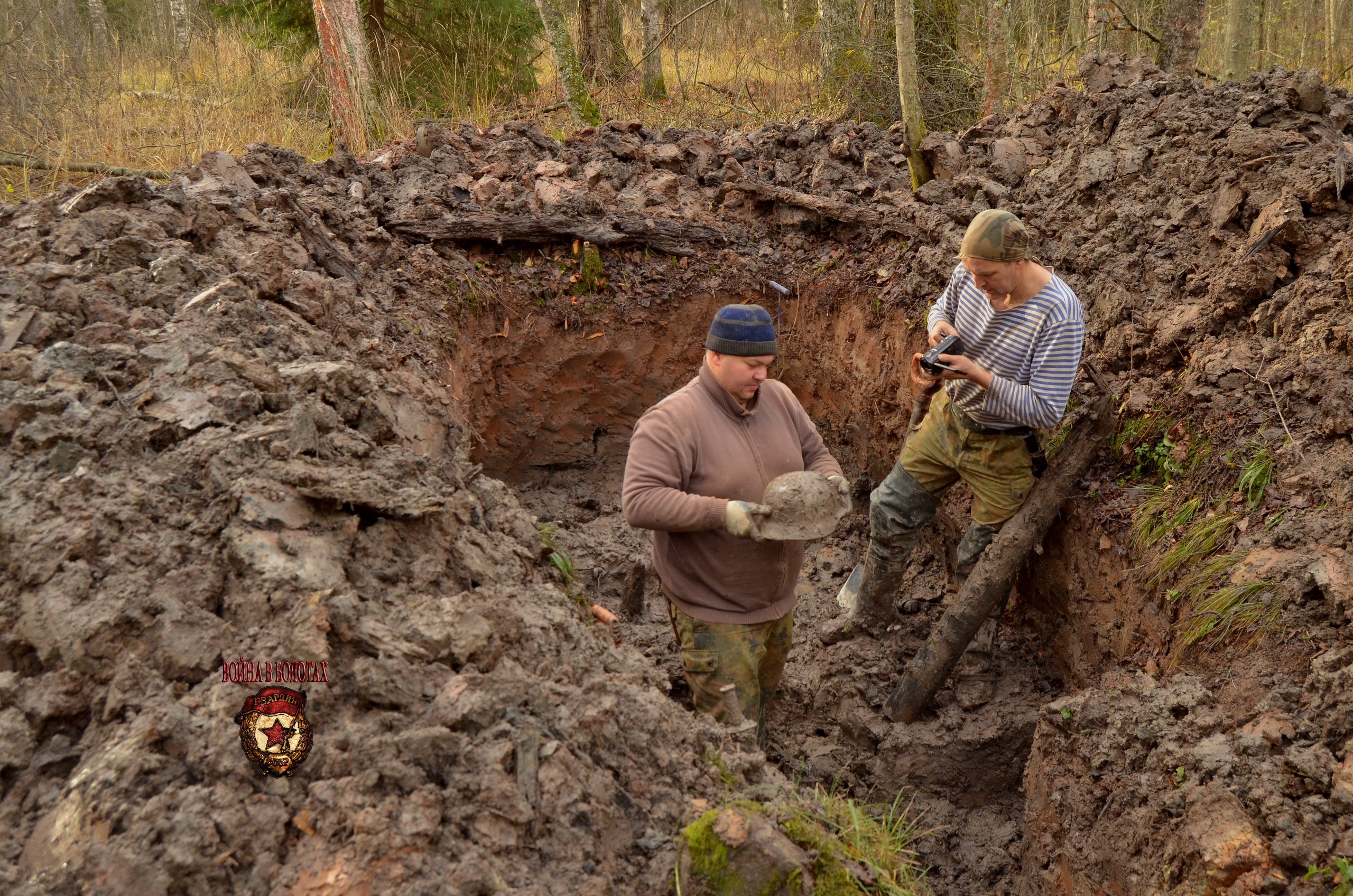 Initially, the helmets were painted in the standard feldgrau color for the Wehrmacht army, but by the winter the soldiers repainted them white.  Photo by @Swamp_war

Having cleared the mud from our helmets, we were a little disappointed. One helmet was damaged. There were several large cracks on the helmet. However, we did not lose the heart. The undamaged helmet was signed – Stabsgefreiter Shenk. 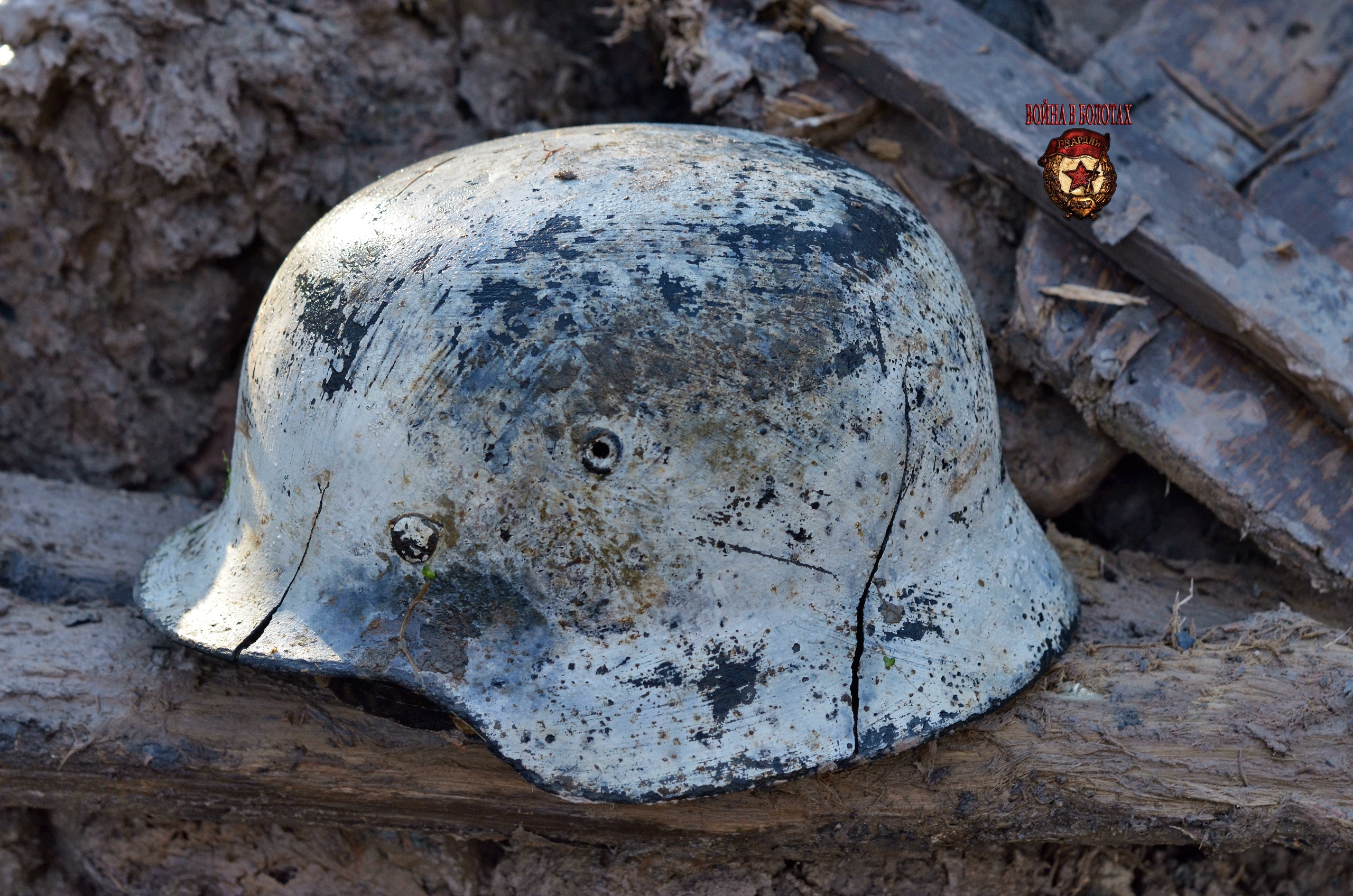 Having been damaged, this helmet is still cool. Photo by @Swamp_war 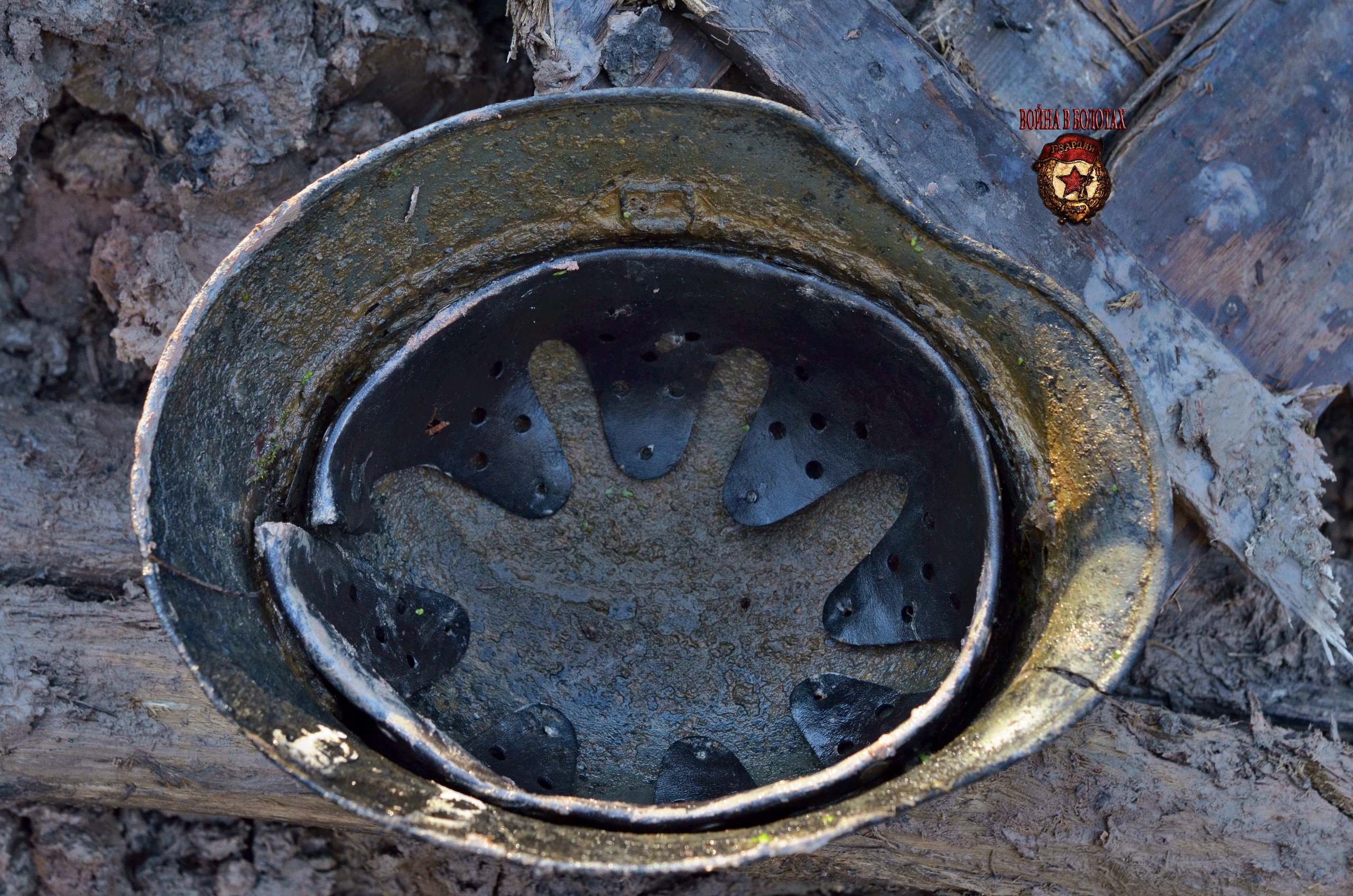 The leather details will be restored and the helmet will return to its original appearance. Photo by @Swamp_war 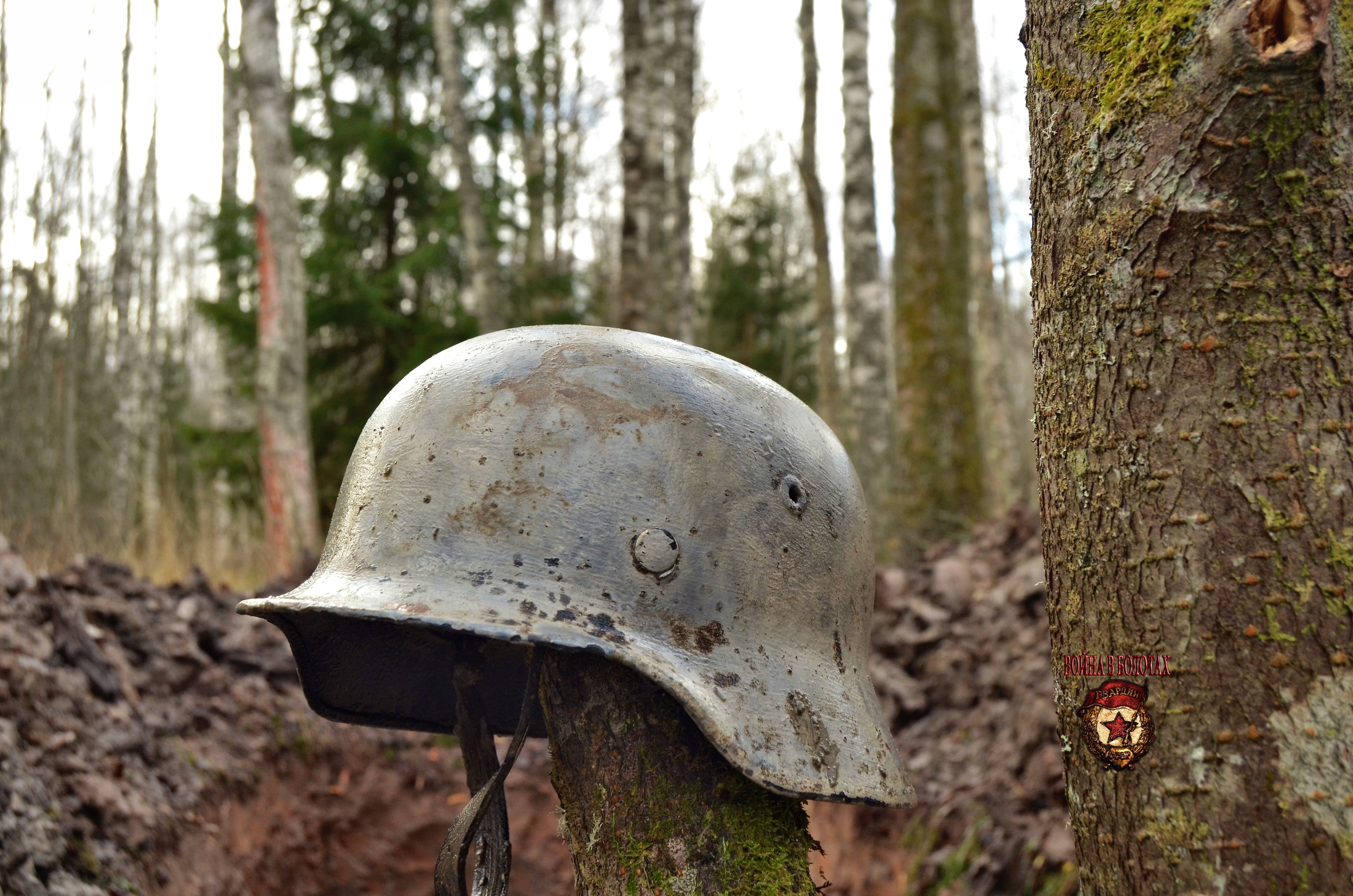 The second helmet was perfect and had no damage. Photo by @Swamp_war 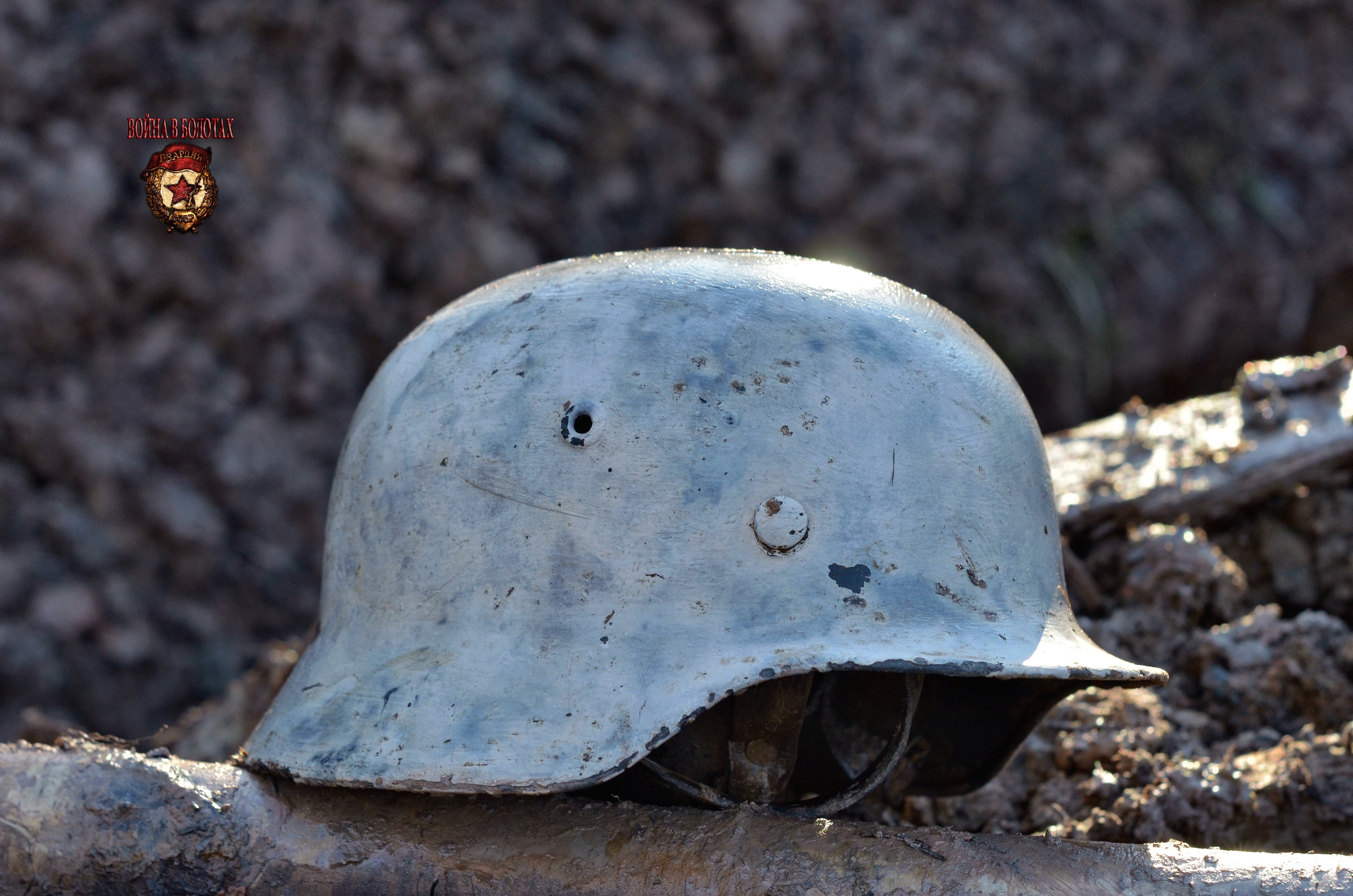 This helmet will be used for the reconstruction of the battles of the Second World War. Photo by @Swamp_war 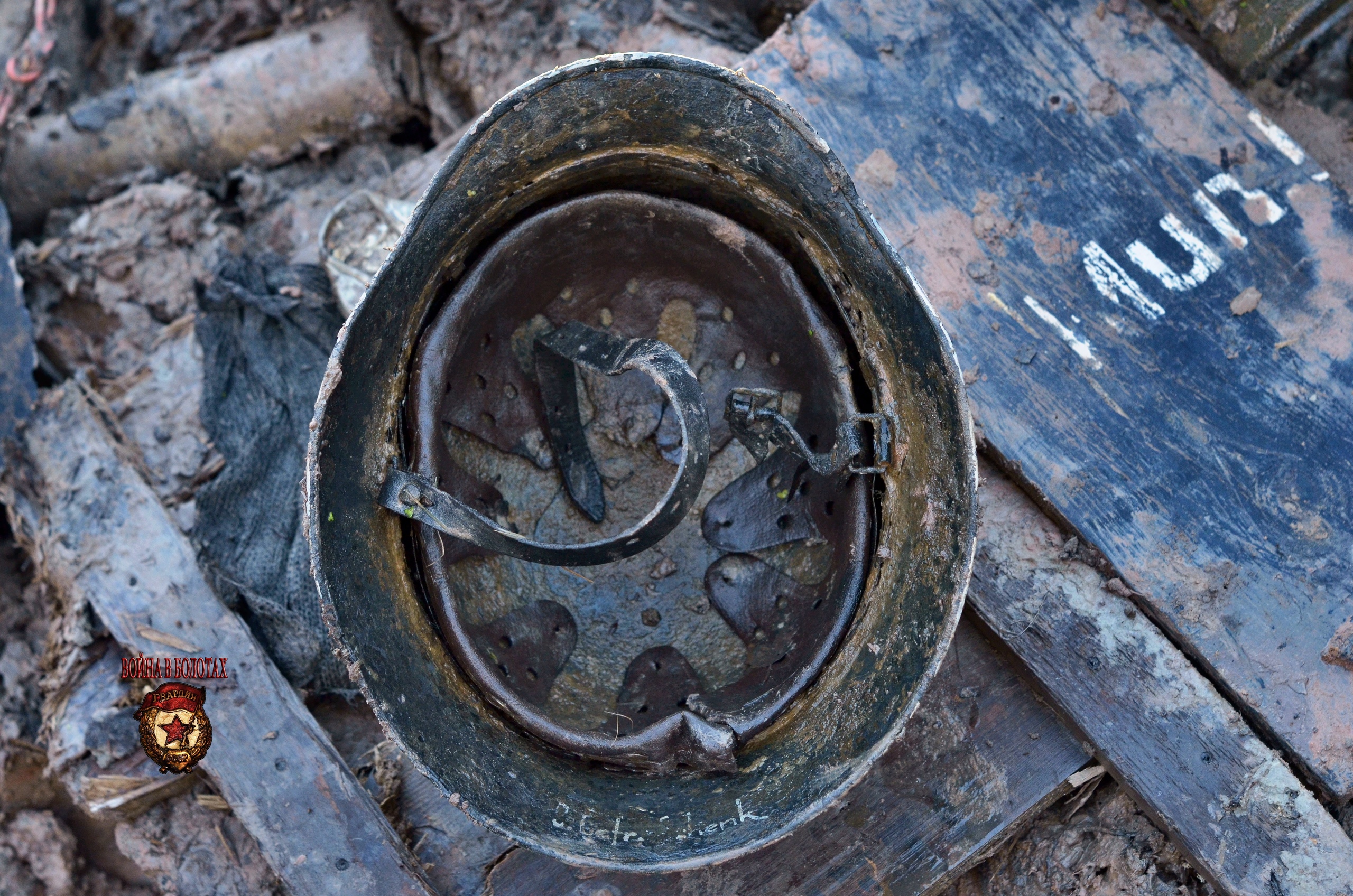 Leather details are also perfectly preserved, having spent more than 70 years in the marshy area of the Leningrad region. Photo by @Swamp_war 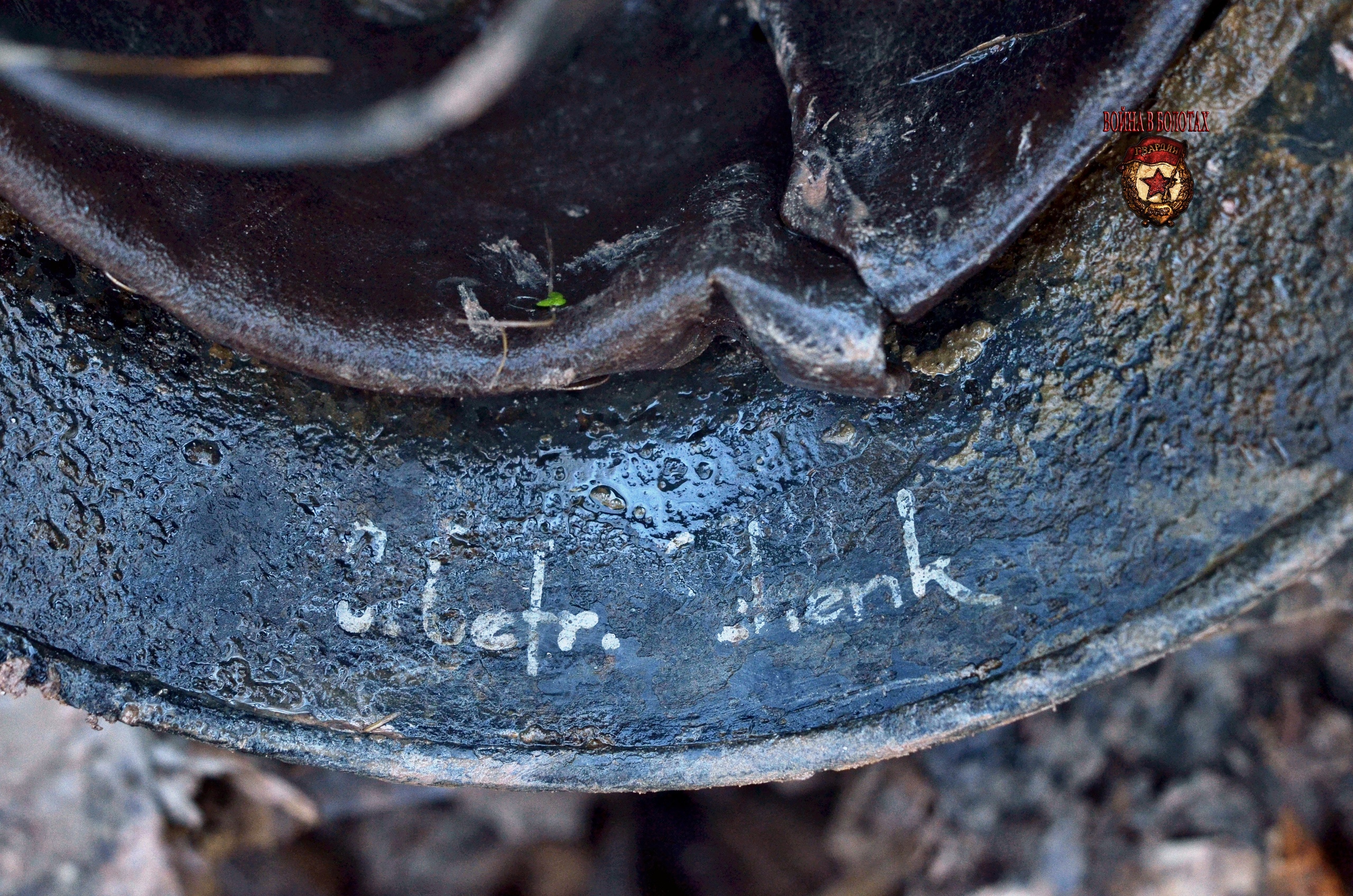 The helmet was signed – Stabsgefreiter Shenk. Photo by @Swamp_war

These are the findings that were found in the next German dugout of the Leningrad Front. Even more cool finds await us ahead, which await us in deep dugouts. Thank you for your attention, I hope you were very interested. I will attach a video of these excavations below. There are also many interesting videos from previous excavations on our YouTube channel. Many videos have English subtitles. 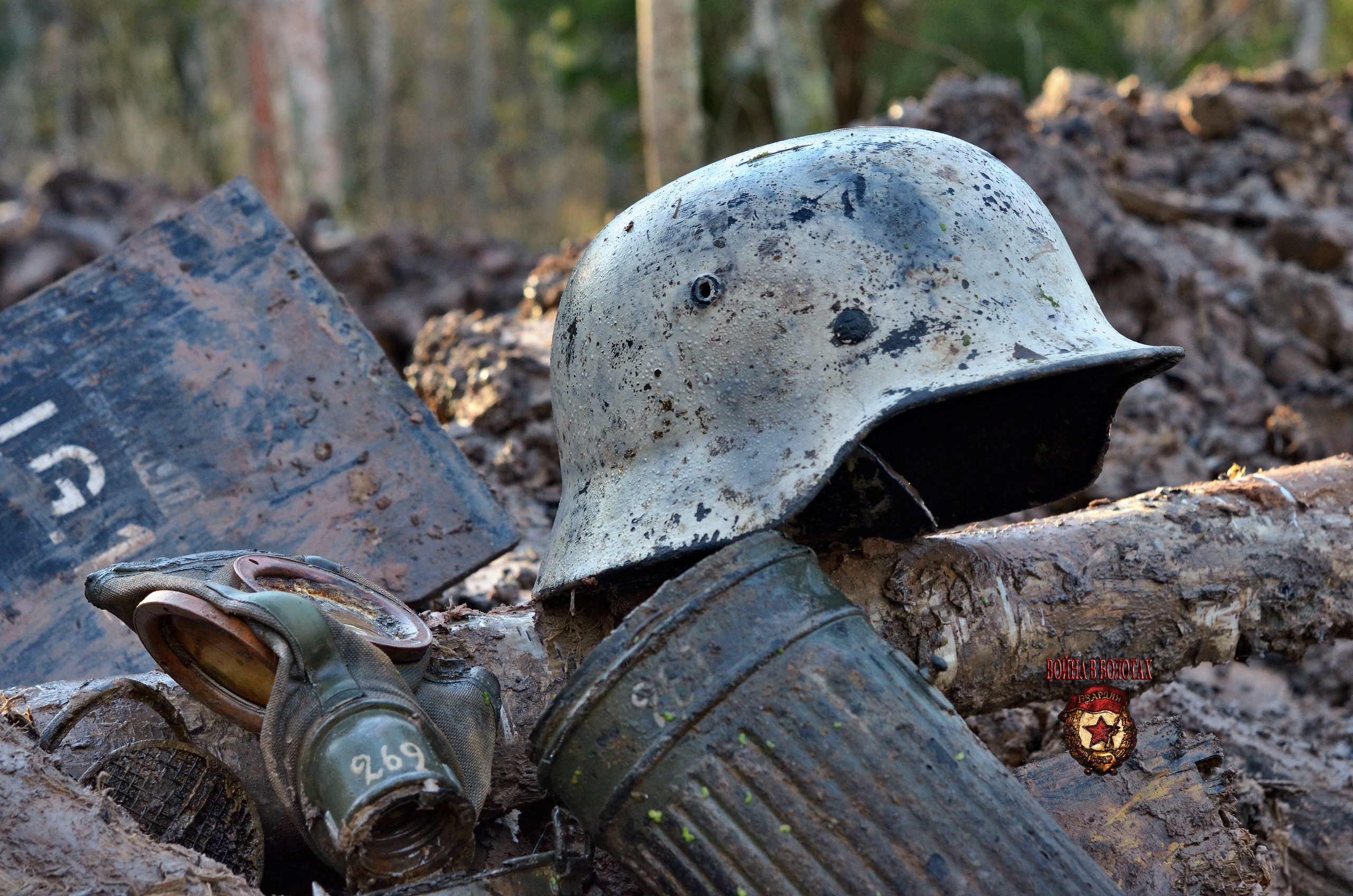 In this dugout, all finds were in perfect condition. Photo by @Swamp_war