In this article, I will tell you about the fate of one American aircraft Lockheed P-38 Lightning, which disappeared in the glaciers of Greenland in 1942. The plane lay in the ice of Greenland at a depth of 80 meters for more than half a century, and in the 1990s was found and raised to the surface by a group of enthusiasts. Work on the extraction of the aircraft lasted for long 2 years. The result was amazing. In total, about $ 3 million was spent.

The largest emergency landing in history

July 15, 1942 six brand new P-38F and two B-17E went from the fjord SondreStrom (Greenland) to the UK to take part in the European theater of operations. When they approached the coast of Iceland they were covered by a severe snowstorm, which forced the squadron to turn back home, to Greenland. Having sent a radio message with a request for a weather forecast to their base, they received a reply that the weather was bad and the runway was closed. This message was sent from a German submarine cruising nearby.

In fact, the weather at the base was perfect. Having circled a little more over Greenland and having reached a critical mark for fuel, the commander decided to land everyone on the ice shelf of Greenland. That was the largest emergency landing in history. 25 crew members huddled in one of the P-38 for nine days, until they were finally saved by the coast guard. Some parts of the P-38 was used for making Norden’s secret sights, the other was left as it was. So this abandoned group of aircraft became known as the Lost Squadron. 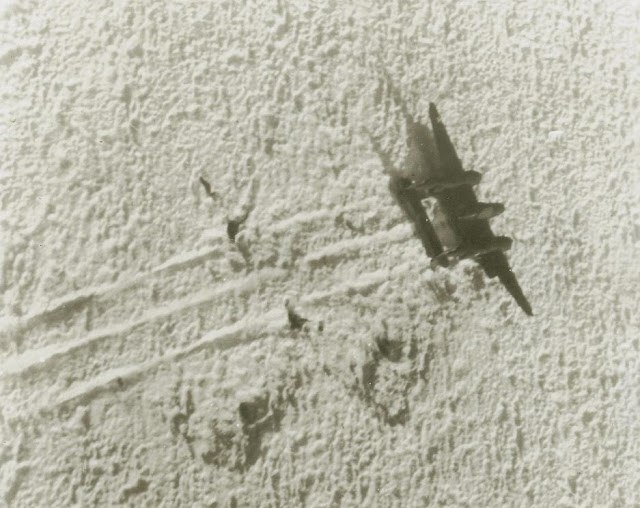 The landing site was known, but for 50 years the aircraft skidded with ice and snow for 80 meters.

Search for the plane

To find the squadron, Pat Epps and Richard Taylor needed several magnetometers and a lot of time while they scanned a huge territory with an interval of 50 meters. The approximate location of the aircraft and the scheme of their ice position could only be established in 1986. And in 1989, having drilled a small hole in the ice, pieces of aluminum were found on the core. From that moment on, an exhausting saga to free the aircraft from under the ice began. 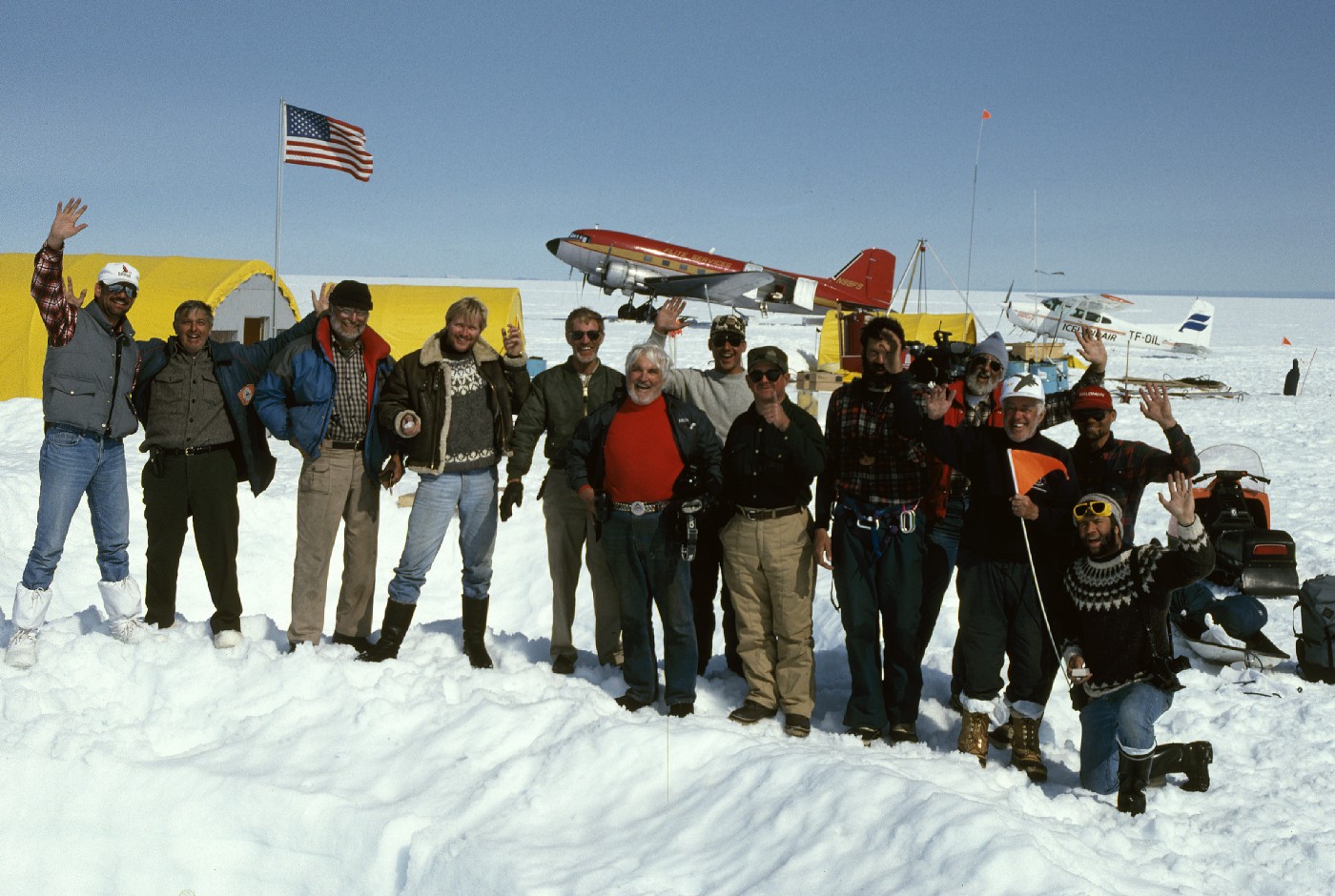 It took several more years to create a special probe, more reminiscent of an iron, able to melt a huge amount of ice. June 6, 1990 at 9 am, the “iron” finally reached the desired depth and came across a P-38. 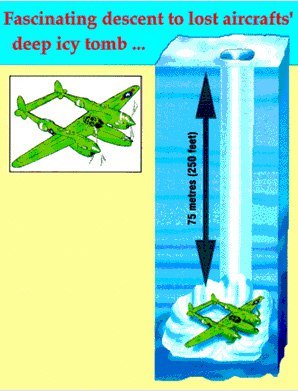 This is what the channel looked like, along which enthusiasts descended to the plane. 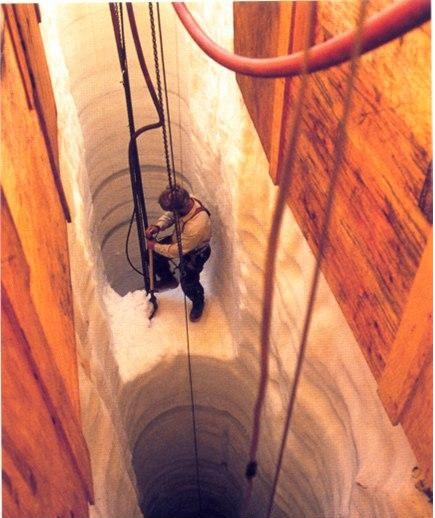 A member of the expedition descends to a depth of 80 meters to the plane.

Extracting an airplane from a glacier

An entire tent camp was erected over the foundation pit, in which surface work was carried out, diesel generators worked, and workers lived. When the main tunnel was melted, workers using steam hoses and pumps constantly pumping water began to melt a cave in the ice layer in the center of which was P38.

Only in 1992 did the aircraft finally get rid of the ice captivity. By the way, it was in excellent condition, the cockpit was untouched, the sensors and tools were in place, even the armament was functioning properly after 50 years.

Read: Abandoned tanks of the island of Shikotan 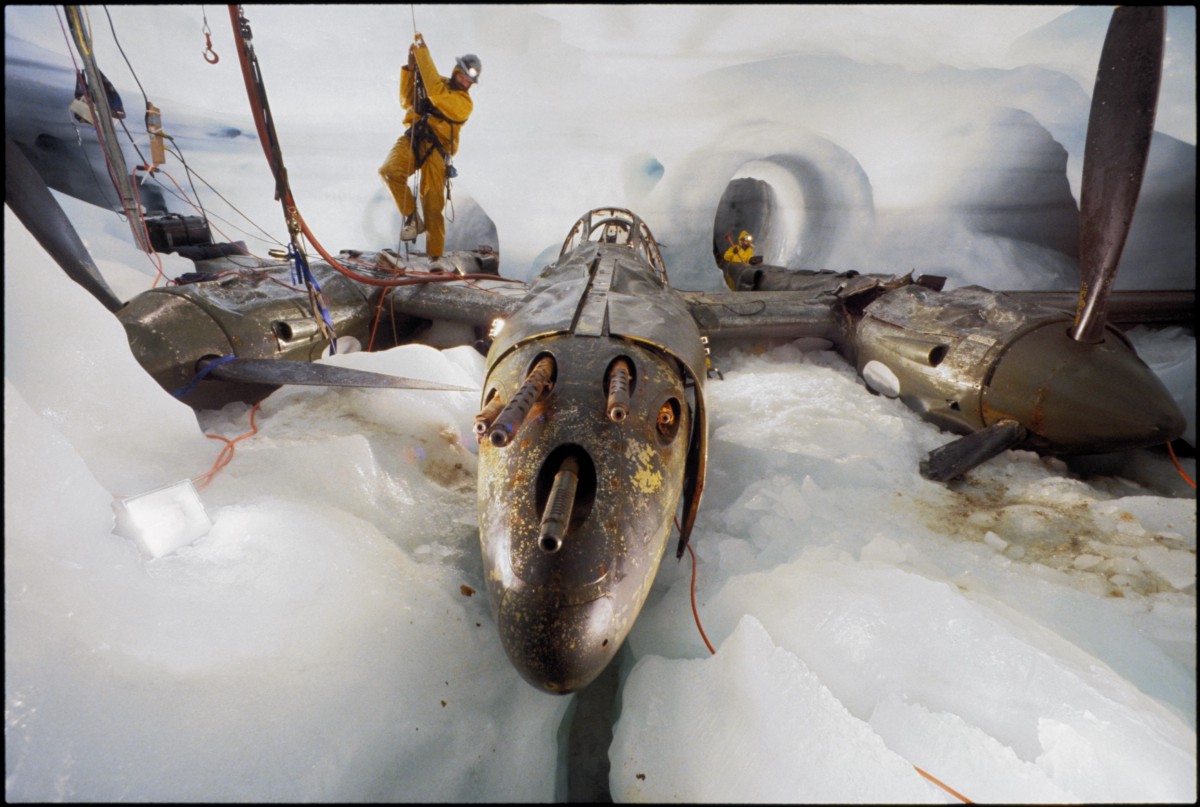 The plane was mothballed by ice. When the expedition members descended they were surprised by the state of the aircraft. 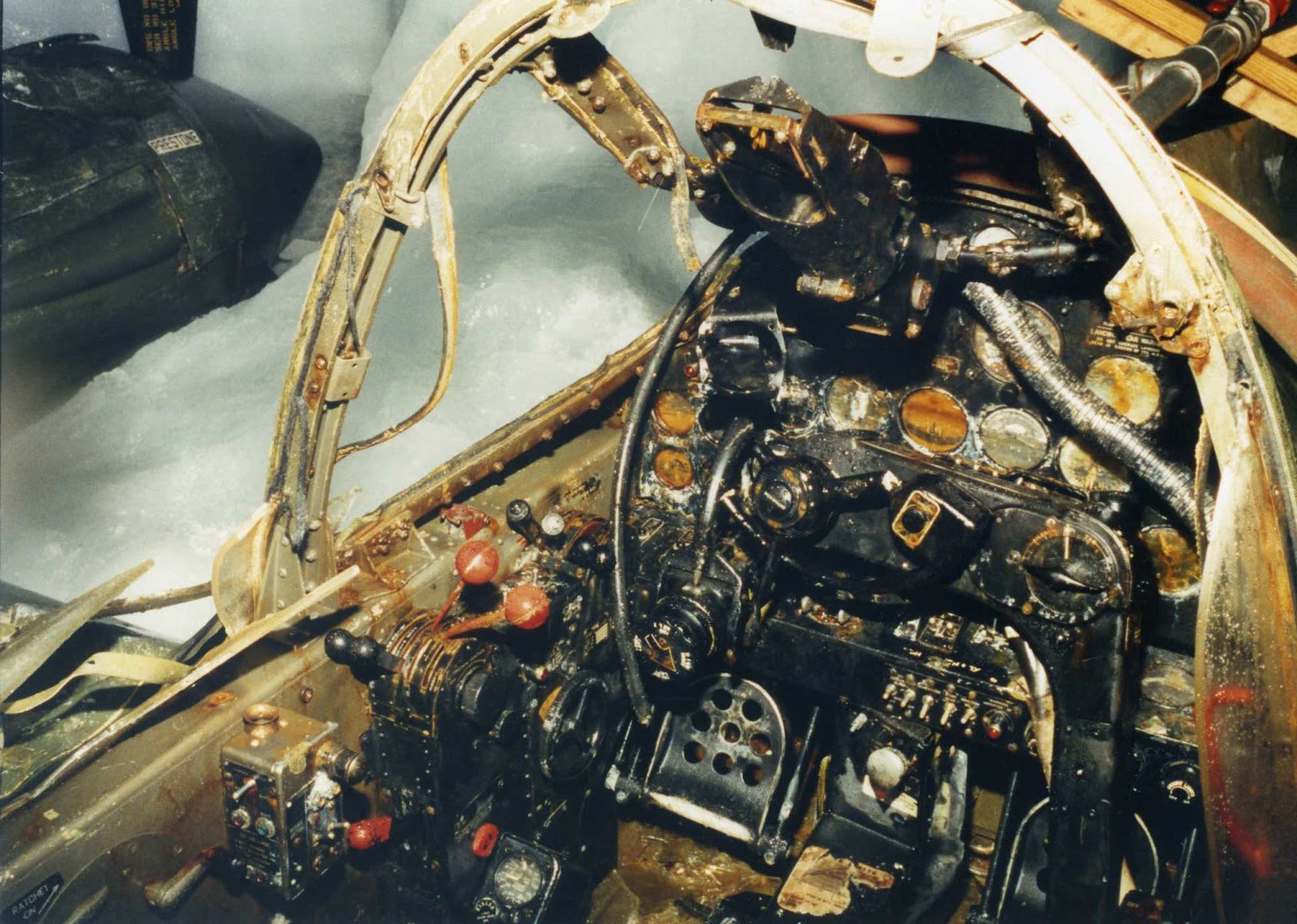 The cockpit looked as if the pilot had left it a few days ago. 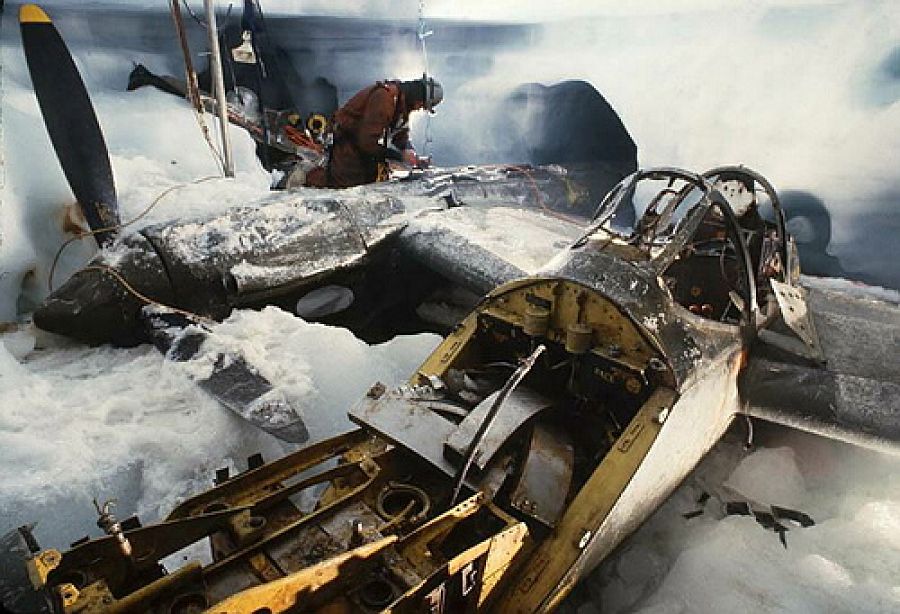 It was impossible to extract the whole aircraft. Therefore, the expedition had to disassemble the aircraft and extract it in parts.

The participant of the expedition and part of the plane lift to the surface of lend.

Six months later, in the Roy (Kentucky) aircraft hangar, assembly of the P-38 aircraft began. It took another nine years of restoration before the plane took off and received the NX17630 number and also the call sign GlacierGirl. The cost of this expedition and restoration amounted to about three million dollars. 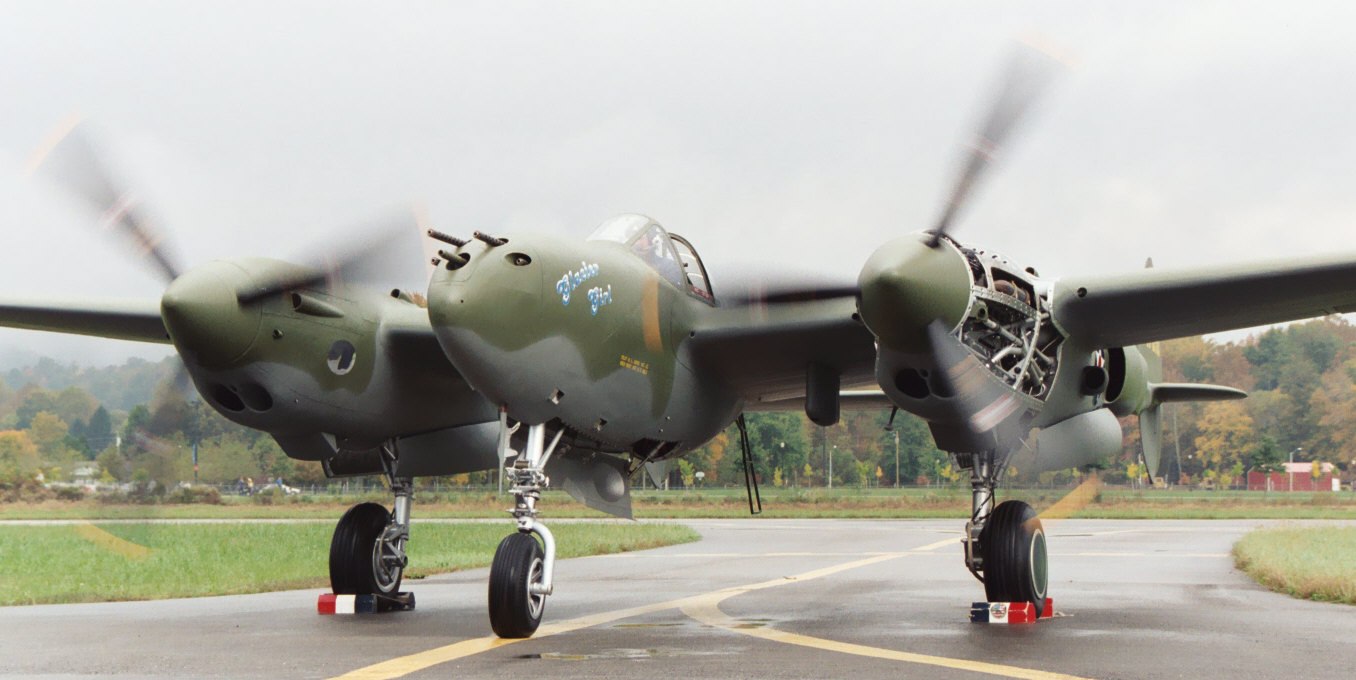 On September 30, 2020, Polish divers found the sunken German transport Karlsruhe (Built in 1905, maximum speed 8 knots) at the bottom of the Baltic ... Read More