“Winter Relief of the German People” or as this organization was originally called “Winterhilfswerk des Deutschen Volkes, WHW – Winter Aid for the German People” is an annual campaign conducted in Nazi Germany to raise funds for food, clothing and warm clothes for the poor and the ones in need. Also a fund raised to help the poor and unemployed field of the great German crisis. WHW Winterhilfswerk organization was founded on September 13, 1933. The Foundation set as its goal the strengthening of “people’s strength and unity” as well as reducing the financial burden on the German state. Later, in the late 30s and early 40s, “Winter Aid” was also entrusted with propaganda tasks to quickly and visually eliminate the consequences of the destruction caused by hostilities in Germany and to fight poverty.

The activities of the organization were within the competence of the Reich Ministry of Public Education and Propaganda, organizationally, “Winterhilfswerk” was part of the “National Socialist Public Welfare”. How it worked and WHW Winterhilfswerk badges

Immediately after the founding of the “Winter Relief of the German People” organization, collection points for the necessities of German citizens in need were established throughout the Third Reich.

For example, an ordinary German worker could bring a bag of grain to such a point and donate. In return for his donation, he could choose one of hundreds of WHW badges from different series. All WHW badges were made from different materials (steel, wood, plastic, glass, paper, fabric). Examples of such badges and series of icons in the photo: This promotion, in the form of badges and toys for people who donated, served as an additional motivation for those who brought and “exchanged” what they did not need for one of the collection items. Many Germans have tried to put together a series of WHW badges entirely for their home collections.

Also, financing of the WHW “Winter Relief of the German People” fund was carried out on the basis of a system of collections, donations, lotteries, voluntary transfer of the wages of employed Germans to the fund, as well as the performance of community service.

Gatherings on the streets and at home with the sale of badges in the winter months (from 1933 to 1943 about 8 thousand different badges were issued) were strongly supported by Nazi propaganda and had a great public response. Many famous people of art and politics of the Third Reich were invited to participate in the training camp.

Youth organizations of Nazi Germany – Hitler Youth and the Union of German Girls – actively participated in fundraising within the framework of the Winter Relief of the German People. The production of badges, organized in the cities of Thuring and Gablonz, played a large role in the economy of these regions. 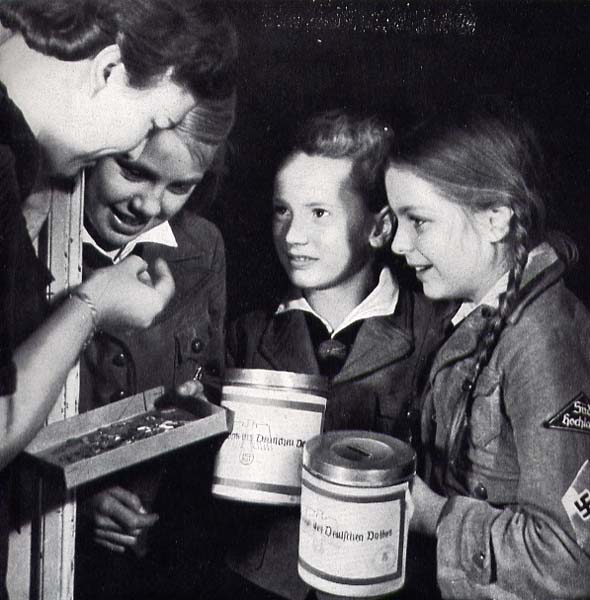 In addition to the WHW badges, Winter Relief of the German People also distributed propaganda booklets in the form of miniature books that could be hung on the Christmas tree. Such a book consisted entirely of portraits of the Fuhrer – with smiling citizens of the Reich, in the Reich Chancellery, with workers, with an elderly peasant woman and ended with a short address by Robert Leigh. The task of the WHW Winterhilfswerk was to partially unload the state budget of the Reich and, not unimportantly, to prepare a financial cushion for the German economy at the time when Germany unleashes another world war.

Initially, WHW was created by decree of Reich President Hindenburg on September 13, 1933, the organization’s tasks included the fight against unemployment (at the beginning of the 30s, a very serious problem of the Reich, as of 1932 there were 5.2 million unemployed in Germany), poverty, later questions related to wartime problems – families of front-line soldiers, evacuees, citizens who lost their homes needed help. As part of the WHW, a company was carried out to collect warm clothes for the Wehrmacht and SS soldiers on the Eastern Front in the winter of 1941-1942. The sources of funding for WHW were very diverse – voluntary donations, refusal of workers and employees from part of their wages, sale of donated collections (similar organizations operated in the USSR), organizing lotteries, selling badges, posters, issuing charitable postage stamps.

How much money has WHW “Winter Relief of the German People” raised?

During the first winter season, “Winter Aid” collected, according to official figures, 358.1 million Reichsmarks. The start of the second season of “Winter Aid” was given on October 9, 1934 by Adolf Hitler. The amount collected has consistently increased in subsequent years, but the financial statements of Winter Aid have not been made available to the public. The amount of funds raised was:

In 1933 – 1939. help to those in need was given in kind – food and things. Since 1939. special settlement signs are introduced into circulation – Wertschein. The mechanism of their use was as follows – such bills were issued to those in need of assistance and were intended to pay for food, clothing, rent, utilities. Upon receipt of a payment token, the purpose of the payment and from whom the payment was accepted was indicated on its back. Further, the settlement signs were transferred to the bank for exchange for Reichsmarks. Banks handed over payment notes to the Reichsbank, which transferred them for payment to WHW.