Relics of the Leningrad Front

Good day, dear reader! In this article I want to tell and show you the relics of the Second World War that we extracted from the German dugout. Excavations were carried out on the ground of the Leningrad Front. I hope you will enjoy the article!

We got to the excavations on May 13. It was raining, but this did not stop us. We set up our camp, and started to drink tea, waiting for the end of the rain. By noon, the rain stopped, and we began excavating the German dugout. The dugout was approximately 1.5 meters deep. Most of the dugouts of the Leningrad front are flooded with water, and this was no exception. First of all, we pumped out water.

The first good find was a German dugout stove, which had a non-standard (rectangular) shape. 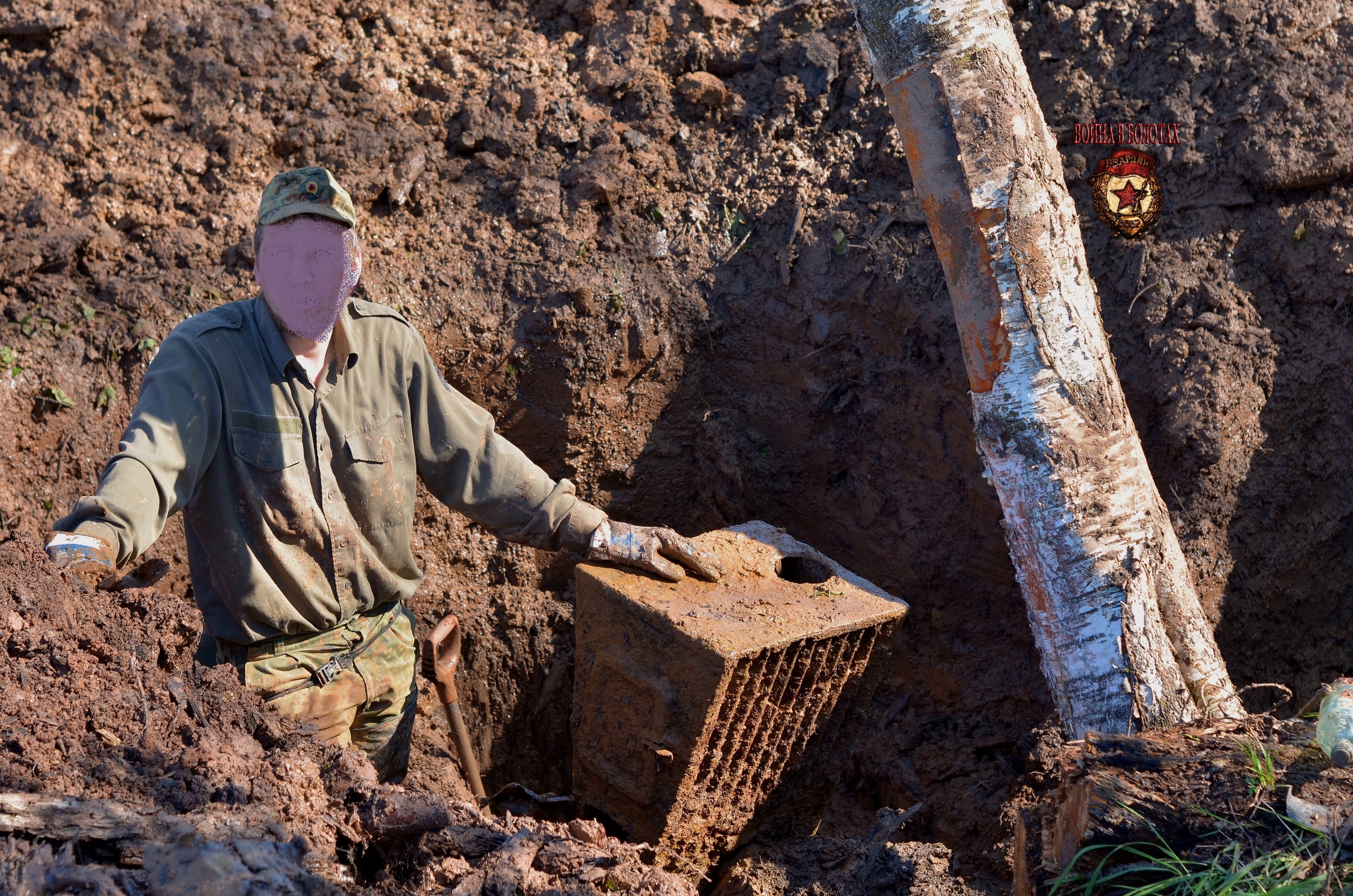 Typically, German dugout stoves are shaped like a cylinder. I dug up a stove of this shape for the first time. Photo by @swamp_war

The next finds were household and personal care items of the Wehrmacht soldiers. Namely: a soap box, two combs, a smoking pipe, buttons, empty alcohol bottles, and a mug from a tea set of Wehrmacht officers. etc. Since there is no stigma on the mug, we cannot pinpoint the type of troops to which it belonged. 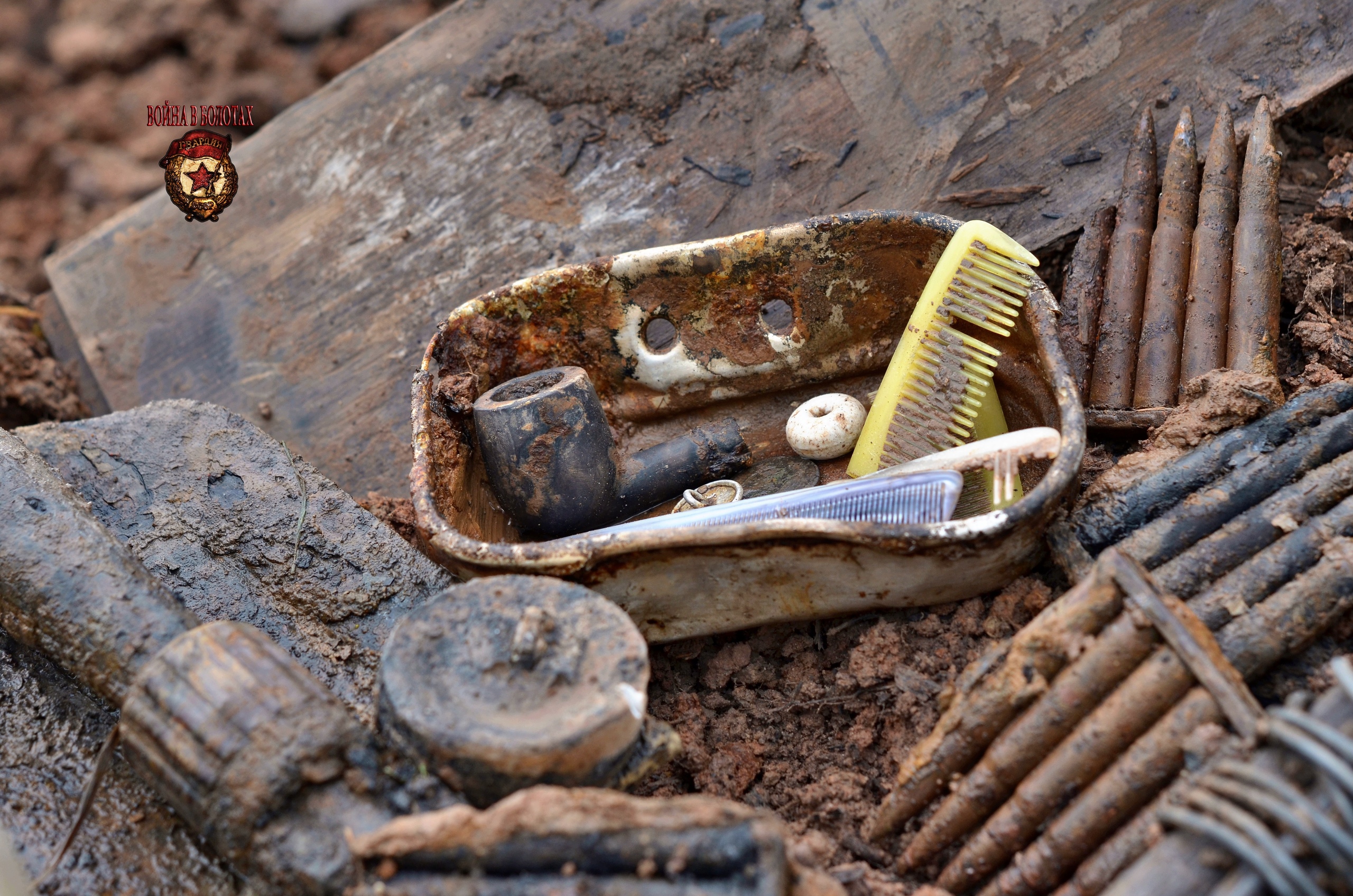 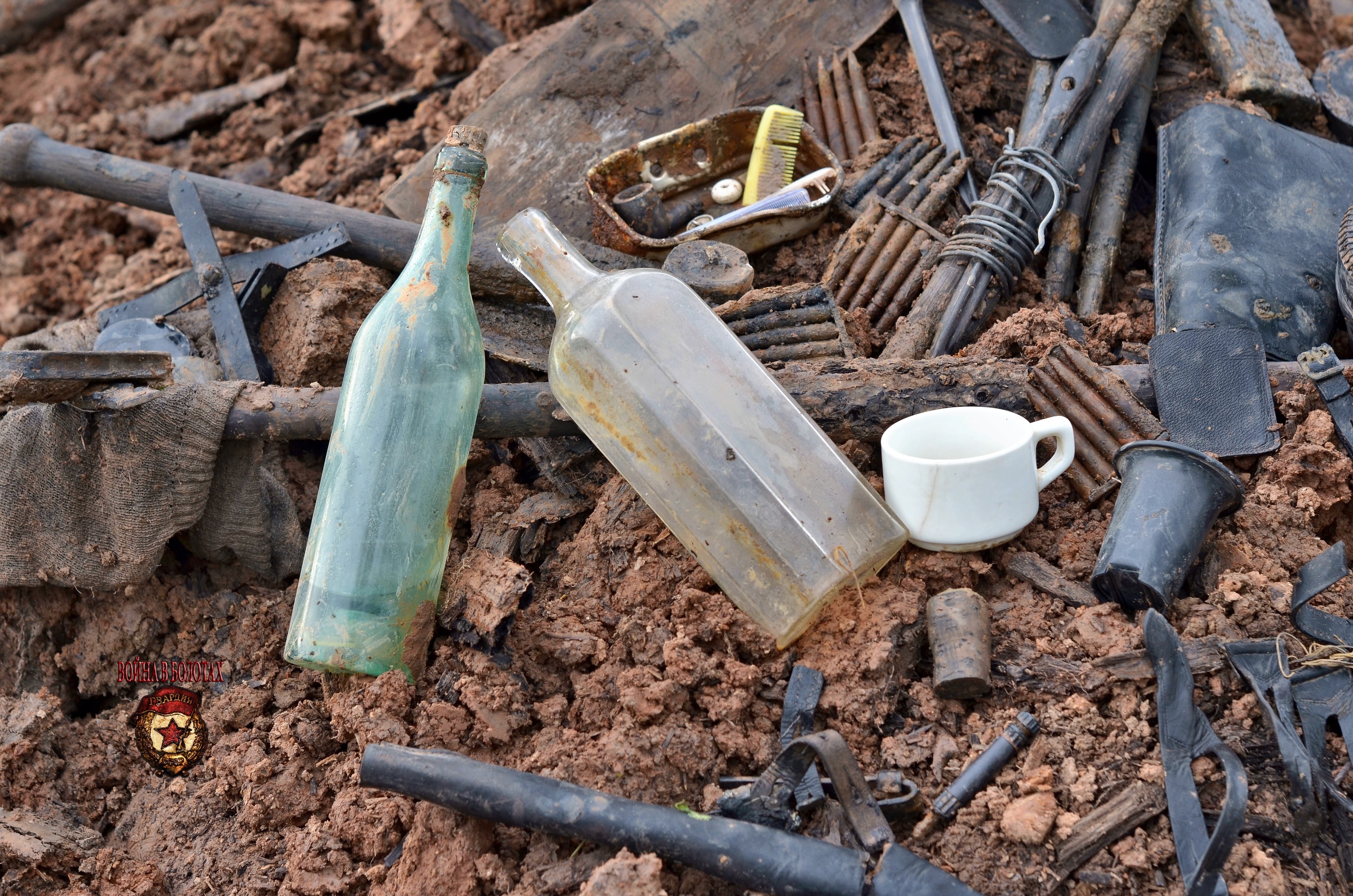 Tableware is always a pleasant find. Photo by @swamp_war

There were a lot of leather goods in the other corner of the dugout. I was glad to find the German leather sheath for the bayonet-knife of the Mauser rifle. They were almost not damaged. I can restore them and use them in a private collection.

Near the wall lay wooden tent pegs that were tied with wire. They are also well preserved (there is varnish on the surface). Digging aside half a meter, we found a German helmet, which, unfortunately, was very rusty. Near the helmet lay German cartridges 7.92×57 for the Mauser rifle, on top of which there was a book. The pages of the book were partially preserved, and we were able to read their contents. 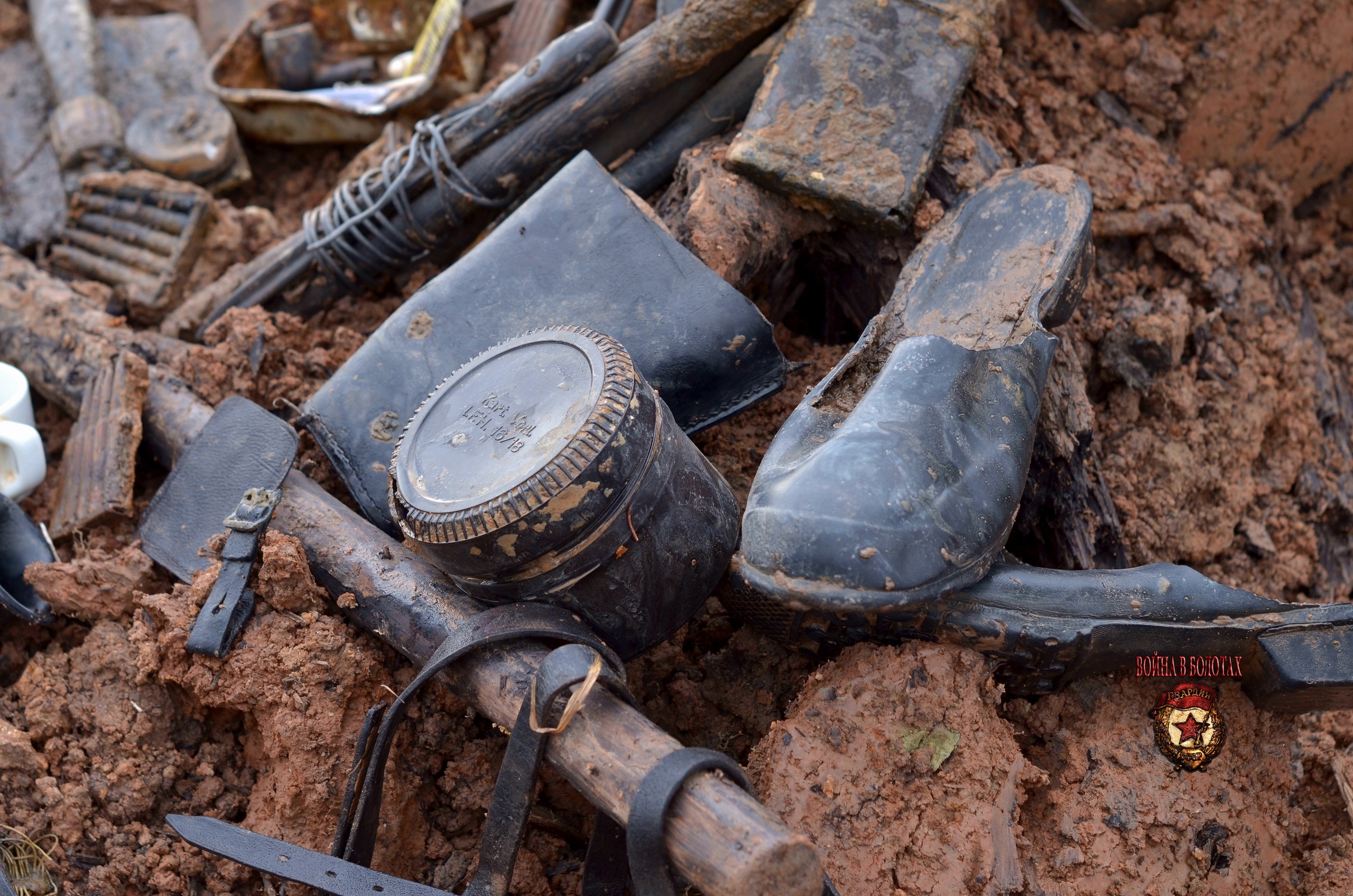 On the right you see leather slippers that a German soldier made by cutting his boots. Photo by @swamp_war 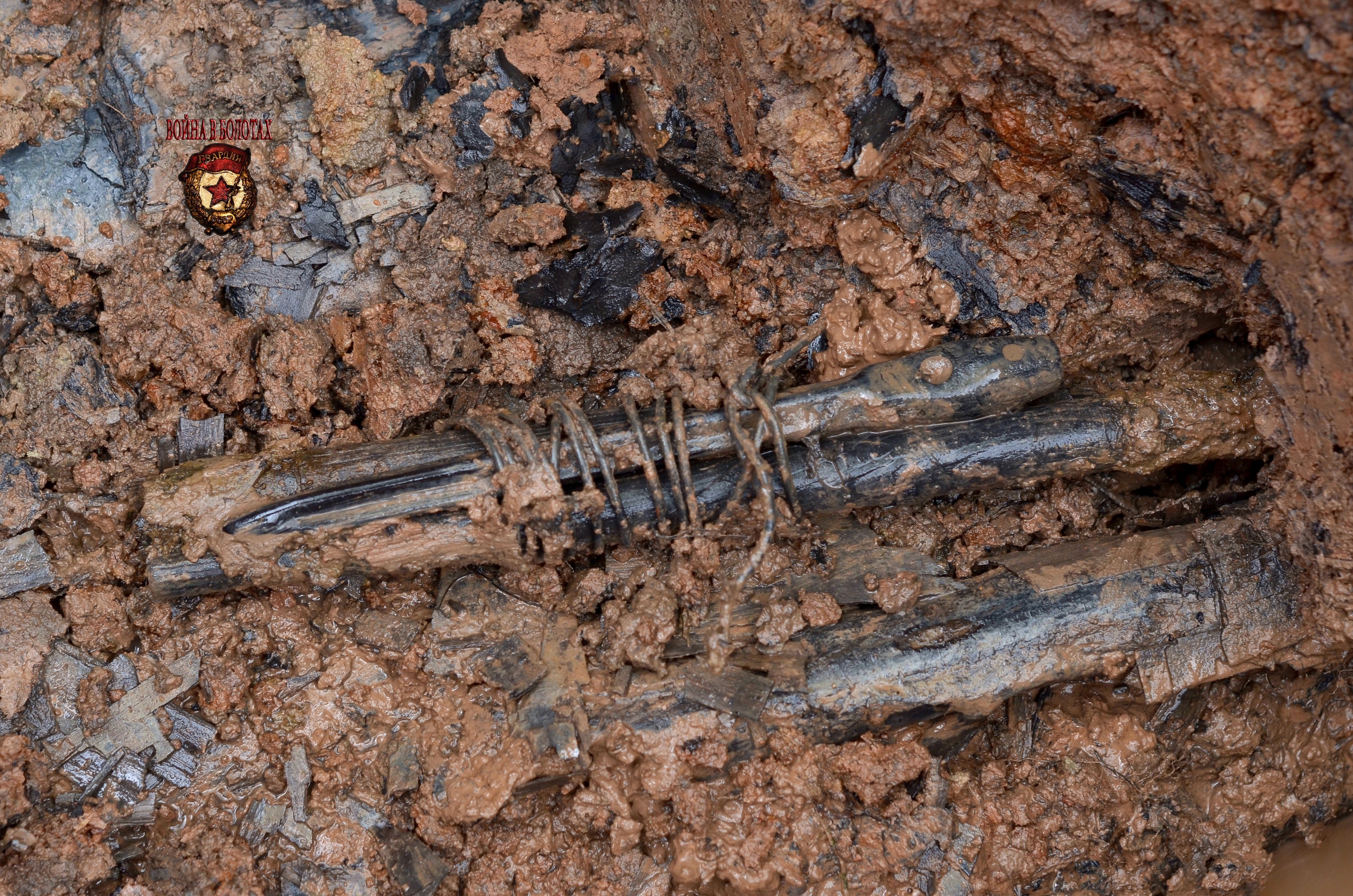 German wooden pegs for a tent. Photo by @swamp_war 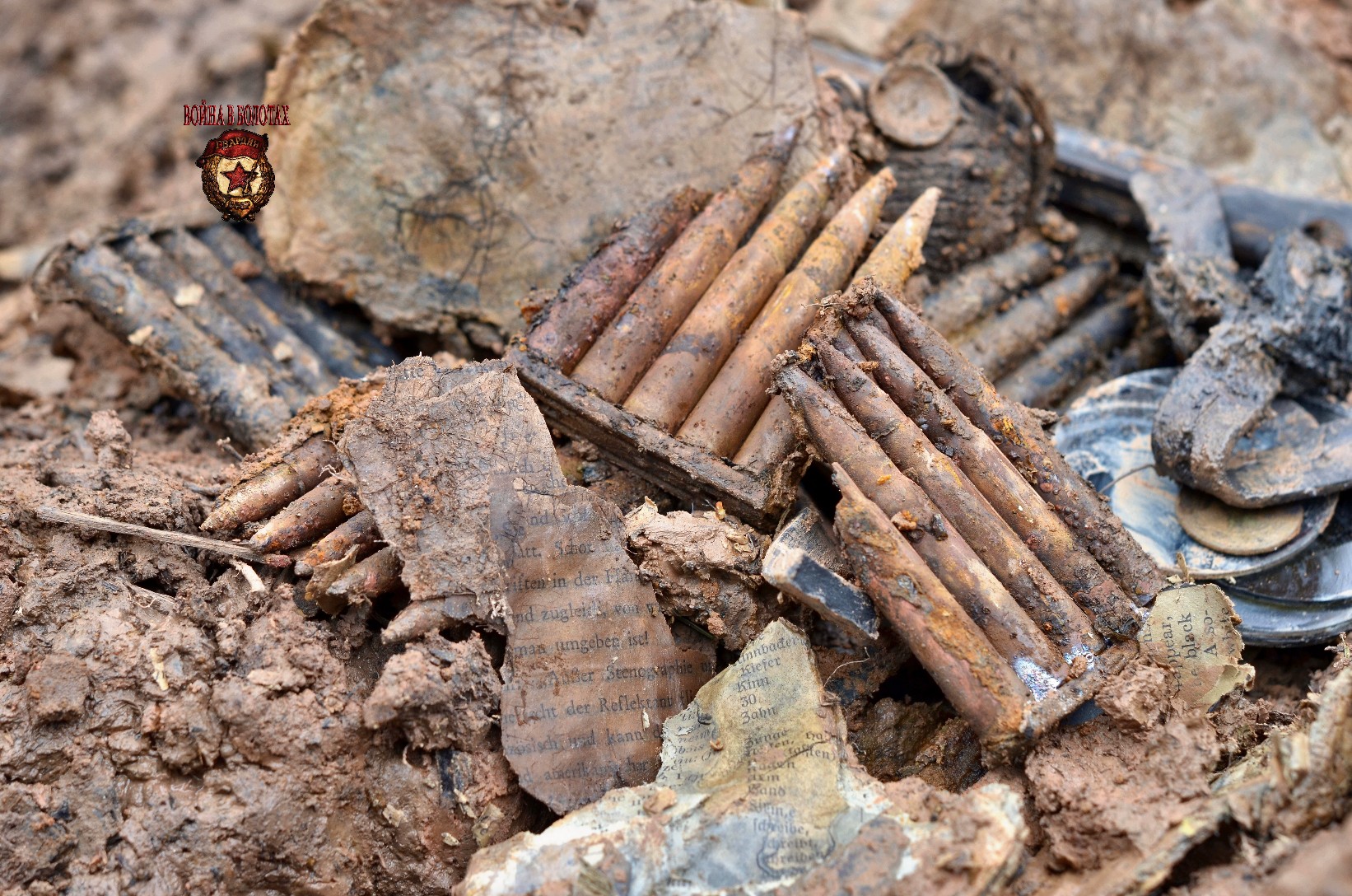 Perhaps you can tell us what is written here. Write in the comments. Photo by @swamp_war

Near the stove lay a broken wooden box with shells. Most likely this box was used to ignite the same stove. On one of the boards was glued a sheet of paper on which the inscriptions were preserved. 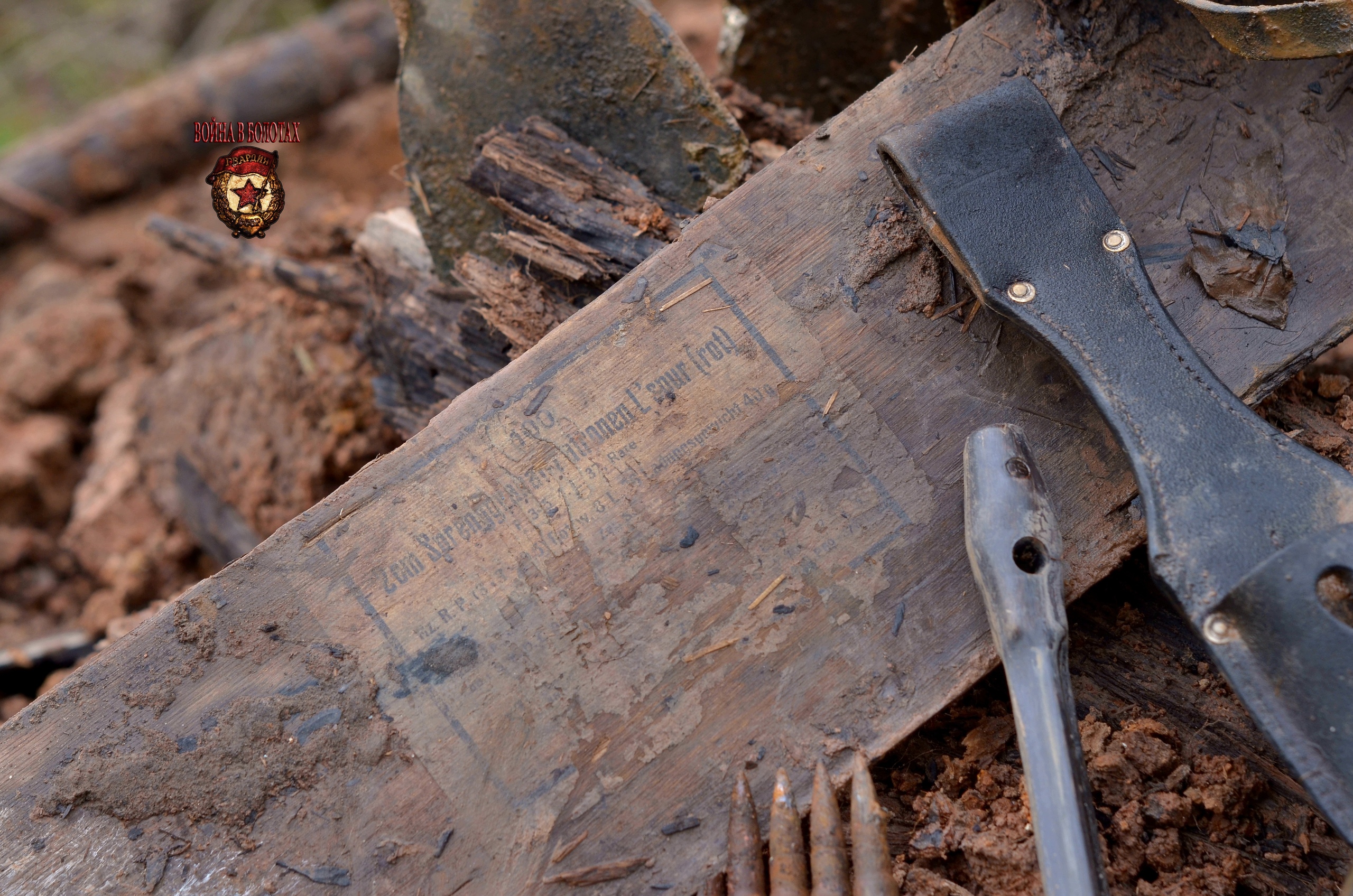 Unfortunately, after drying, the sheet was destroyed. Photo by @swamp_war 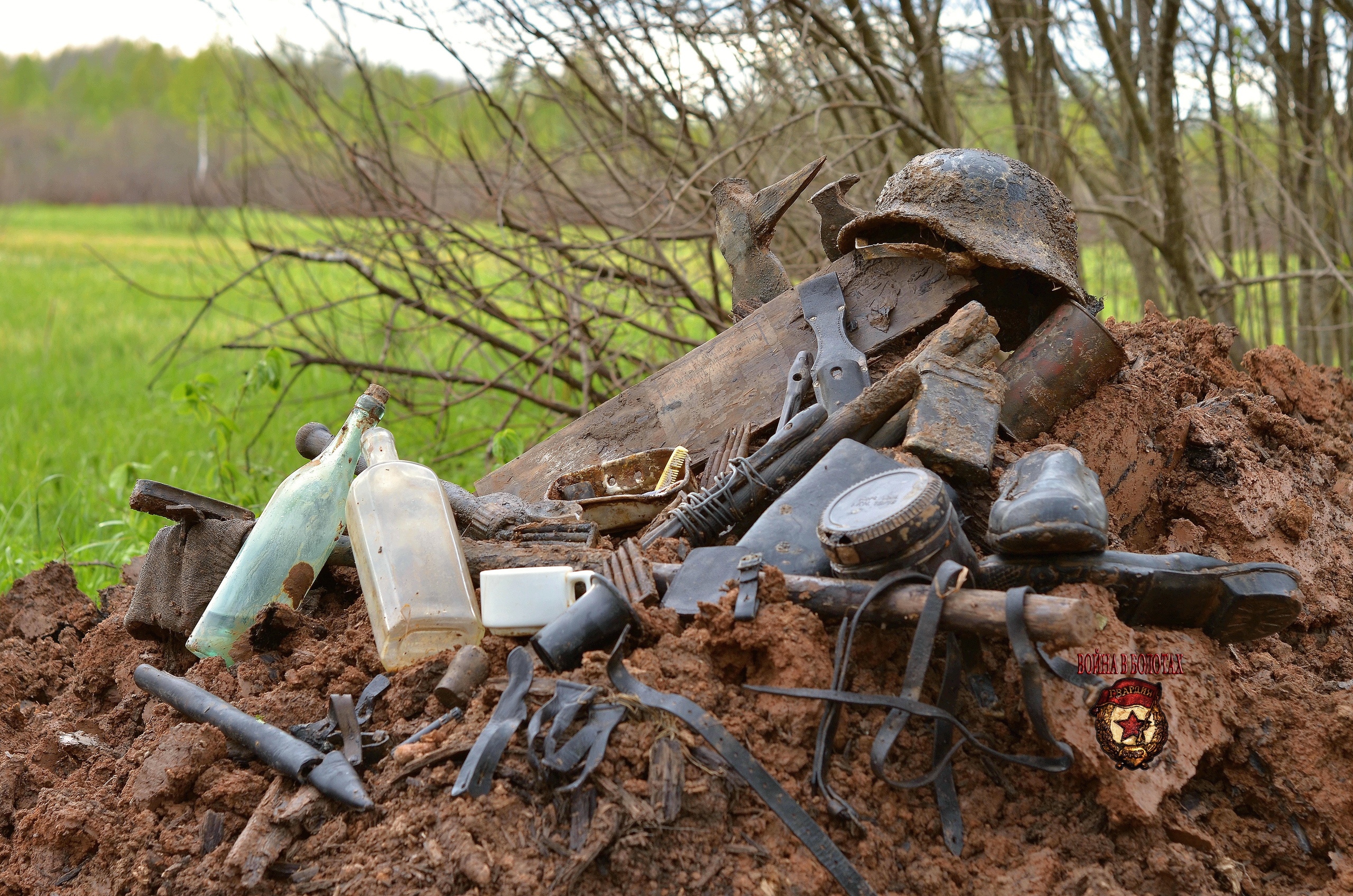 All finds of that day. Photo by @swamp_war

We still managed to find a lot of things, but I showed you the main finds in the article. If you want to see how the excavations took place, go to my YouTube channel “Swamp War”.